Fells are challenging environments for plants, and growing conditions change the higher the elevation and the farther north the growing site is. A unique characteristic of Fennoscandian fells is that the treeline is not demarcated by coniferous forest, but rather fell birch. In Kilpisjärvi, fell birch grow at elevations of up to approximately 600 metres, but only grow at elevations of 300 metres above sea level on fells along the Teno River, due to their northern latitude. On fells farther to the south, fell birch stands are rare. 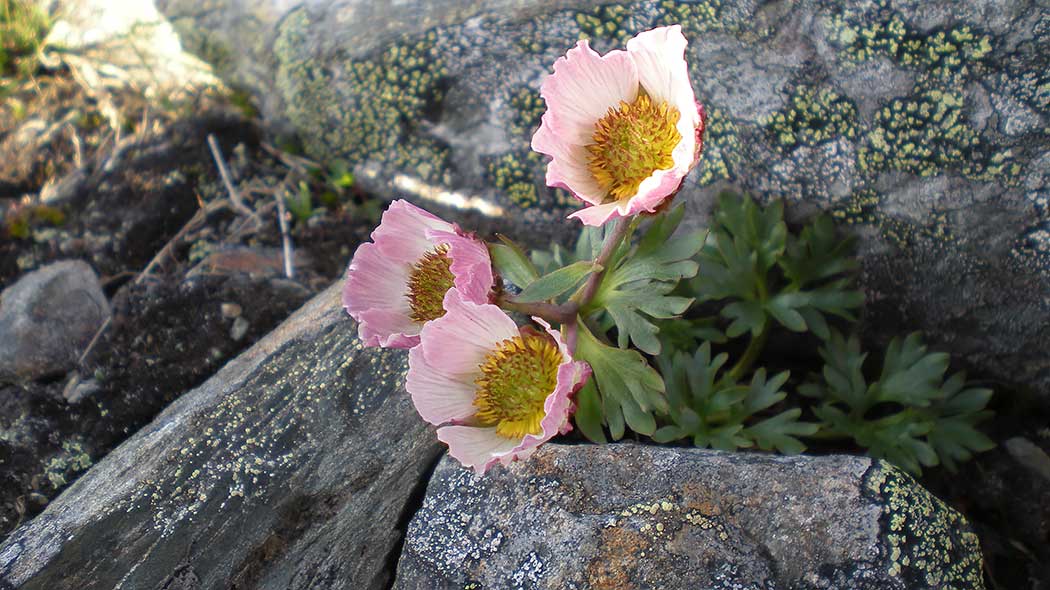 With the exception of the higher peaks in the Käsivarsi region, Finland's fells were formed from ancient, barren bedrock. They are the remnants of a mountain range that existed before Finland was shifted to its present position by the movement of tectonic plates. The barrenness of the bedrock can be seen in the vegetation, which is considerably more modest than that found on the fells of Norway and Sweden whose bedrock is lime-rich. A piece of the younger Scandinavian Mountains extends down into the high fells of the Käsivarsi region.  At Saana and Toskalharju, visitors can make out the pale dolomite lime deposits on the slopes of distant fells.

Between the maritime and continental climates

Vegetation zones affected by the sea do not follow the lines of latitude - they rise toward the northeast. The northern treeline for spruce runs from the Pahakuru Gorge at Ounastunturi in the west to Ivalojoki River and Saariselkä in the northeast. Forest Lapland begins north of this point. North of the pine forests is Fell Lapland, which is dominated by fell birch stands and treeless summits. The fells of Enontekiö, Inari and Utsjoki are Fell Lapland at its most authentic. Fjord Lapland extends into Finland slightly at Kilpisjärvi, where the effect of the maritime climate can be seen, for example, by the presence of fell birch stands dominated by dwarf cornel. 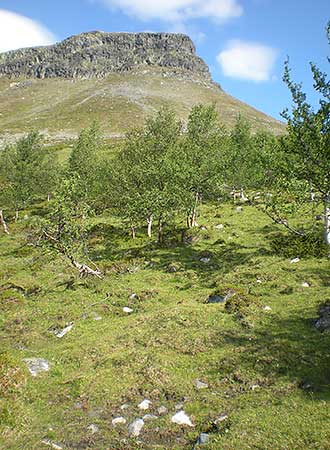 The growing season in the fells is short. The minimum temperature of the growing season is a critical factor for plants to succeed. Fell plants had to specialise in order to survive in the harsh conditions.
The buds of fell plants are often protected close to the ground, and species spread by branching our close to the surface and growing buds. They also often grow in dense mats. Many fell plants have needle-like leaves, which can withstand freezing temperatures and drying winds. Fell plants are often perennials, such as shrubs. Growing close to the ground is an advantage in the fells.

Fell plants typically bloom quickly. The flower buds have been ready to blossom since the previous summer, waiting for suitably warm weather.

No two treeless summits are alike

Treeless summits are divided into three zones: the alpine, subalpine and summit.  A majority of Finland's fells fall into the alpine zone. Individual fell birches may still grow in this zone. Typical plants include the mountain crowberry (Empetrum nigrum subsp. hermaphroditum), blueberry (Vaccinium myrtillus), dwarf birch (Betula nana) and blue heath (Phyllodoce caerulea). At elevations above 900 metres is the subalpine zone, which are characterised by grass-dominated heaths, such as highland rush and Arctic white heather, as well as snowbeds. The grassy heaths of the subalpine zone are also typically home to sheep's fescue (Festuca ovina), dwarf willow (Salix herbacea), spike trisetum (Trisetum spicatum) and Alpine sweetgrass (Hieracium alpina). The alpine and subalpine zones are only found in the fells of the Käsivarsi region.

The thickness and duration of snow cover and the wind all contribute to shaping the summit vegetation. The barren fell heaths are the most extensive fell biotopes in Finland's fells. Blueberry, blue heath and dwarf birch heaths are commonly found on the lower slopes of fells and in depression in areas with deep snow cover. Crowberry heaths become more common when climbing to the drier and windier summit areas. In some places, the wind is so hard on vegetation that wind heaths are formed.

Snowbeds melt very late into the summer, not melting fully until late July or early August. Even though the thick snow protects against freezing temperatures, the slow meltoff shortens the growing season. The snow buttercup (Ranunculus nivalis) is one of the species that has adapted to living in snowbeds. Others are the glacier buttercup (Ranunculus glacialis), starry saxifrage (Micranthes stellaris), dwarf cudweed (Gnaphalium supinum), creeping sibbaldia (Sibbaldia procumbens), moss bell heather (Harrimanella hypnoides) and polar willow (Salix polaris). There are also moss species that typically grow in snowbeds.

The coldness of the summit zone prevents the growth of a uniform vegetation layer. Most of the vegetation growing at this elevation is moss and lichen. On the nutrient-rich fells of the Käsivarsi region, it is possible to see the rosette and red-white flowers of glacier buttercups growing almost straight up out of bare earth or out of cracks in the rock.