What is now Repovesi National Park was an important hunting and fishing ground during the Stone Age, as well as, long after. The people of the Stone Age left rock paintings, prehistoric tools and hunting equipment behind. The most important prey of the time are evident from local place names such as Terrilammet (terri = teeri = Black Grouse (Tetrao tetrix) ) and Lake Peuranen (peura = deer). In the 13th and 14th Centuries people from Karelia migrated to the Repovesi area. The word Repo (meaning 'fox') is originally from there.

A period of slash and burn agriculture and tar burning began at Repovesi in the 17th Century, when the forests in the area were felled for the first time. The Lake Tervajärvi (terva = tar) area was, as its name is implies, the main area where tar was burnt. However, forested tar pits have also been found elsewhere in the Repovesi area as well. Tar burning was an important form of forest utilisation up until the 19th Century.

The Forest Industry Arrives at Repovesi

Logging was started in the 18th Century for the use of the sawmill industry. The first sawmill was built at Voikoski in 1770 and a small sawmill operated in Tervarumpu from the 1820's to 1858. A steam powered sawmill was founded in Sahaniemi (‘Saw Cape') at Hillosensalmi at the beginning of the 20th Century. The sawmill brought new jobs and the use of electricity helped the village of Hillosensalmi flourish.

Three paper mills were built on the shore of the River Kymijoki at the end of the 19th Century. They joined to form the Kymiyhtiö enterprise in 1904. Today the enterprise is called UPM-Kymmene. In 1889 the new Savo Railroad opened and this made it possible to transport wood to paper mills by train. Repovesi was also located by waterways, which were good for floating logs. Because Repovesi was easy to reach, the forests there were very sought-after. A major part of the area's forests were acquired by the Kymiyhtiö enterprise in 1913.

Log floating was practised in the Repovesi area from the 19th Century to the 1960's. Logging was done by men and horses up to then. In winter the timber was taken onto the ice covering lakes, and in spring when the ice melted it was floated down streams to larger lakes. Log floating flumes were built across rocky streams. The Kuutinkanava Canal and its log floating flume were built in 1912. Logs could then be floated straight from Lake Tervajärvi into Kuutinlahti Bay in Lake Repovesi. In order to have enough water in the flume, the level of water in Lake Tervajärvi had to be raised 50-100 cm with the help of dams. The last summer logs were floated was in 1968. 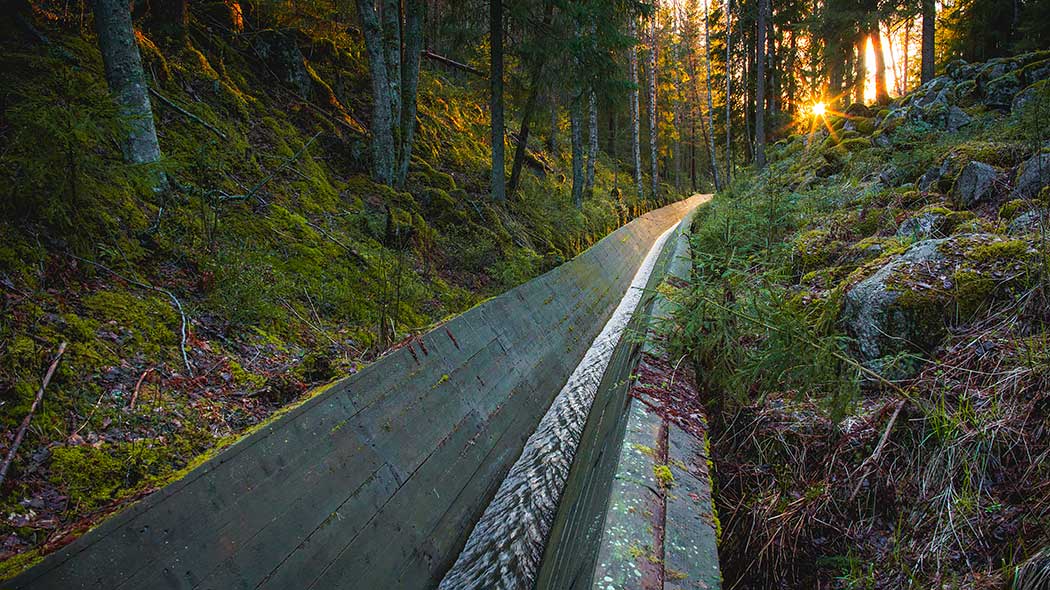 Roads built in 1968-74 made extensive logging possible in the untouched forests of the Repovesi area. In the 1970's mechanical logging began. Forests were regenerated primarily by planting new trees. The last time prescribed burning was used to renew forests in Repovesi was in 1977. Today this is starting to be used again. These purposefully set fires resemble wild fires. Burnt forests are essential as a habitat of some threatened species.

In 2001 conservation of the Repovesi area improved significantly, as UPM (upm.com) donated 560 hectares of forests for the establishment of a national park, and set forth a proposal that Aarnikotka Forest Nature Reserve be established on lands owned by the enterprise. Repovesi National Park (1,500 hectares) and Aarnikotka forest Nature Reserve (1,400 hectares) form a magnificent protected area of almost 30 sq. km. This is the largest protected forest area in south-eastern Finland.

The Emblem of Repovesi National Park is Red Fox