In other nature centers in Finland, we require the use of a facial mask and keeping the 2 meter distance to other visitors. In addition, there may be requirements to show the Covid pass, and/or the number of visitors can be limited. More information Nature centers. The length of the restrictions depends on the region. More regional information can be found at the Finnish institute for health and welfare website.
Rutajoki river is flooding. Koskikaran kierros -trail and Rutalahti connecting trail are closed.

Leivonmäki National Park is located west of main road 4 in the municipality of Joutsa. It is 50 km from Jyväskylä to Leivonmäki and 135 km from Lahti.

Hiking trails can be accessed from the Selänpohja or Kirveslampi parking areas. You can also start hiking in Rutalahti from the former Koskikara school or Harjunlahti beach (Municipality of Joutsa). Starting points for the hiking trails.

Selänpohja parking area (Syysniementie 1072, Joutsa). Space for approximately 50 cars. Signs for the national park can be seen when arriving on Highway 4 from the north and south.

All three parking areas are also open in winter, but there may be delays in ploughing, which can mean fewer available spaces.

There is no public transportation to the area. Mainly on weekdays, there are some buses (matkahuolto.fi) serving the Jyväskylä-Joutsa and Jyväskylä-Lahti-Helsinki routes. These buses stop along Highway 4. On Highway 4, the bus stops closest to the park are at the Rutalahti (Joutsa) crossroads and Leivonmäki (Joutsa) crossroads.

The nearest taxi services can be found in Leivonmäki which is located in Joutsa.

Some partners also offer transport services to the national park.

To Jyväskylä by Train

The closest railway station to the Leivonmäki National Park is in Jyväskylä (50 km). 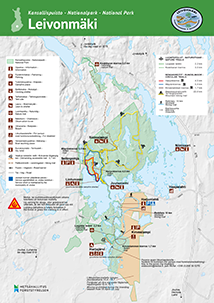