Natural Features and Sights of Rahja

Stone labyrinths built in the 11th–17th centuries have been found dotted about the shores of the Arctic Ocean and the Baltic Sea. The purpose of the stone labyrinths is unclear, but they are always located close to good fishing and seal hunting areas. The Rahja stone labyrinth is located on Hevoskari Island, which used to be an important base for fishermen and seal hunters. There are also stone labyrinths in the Kvarken Archipelago and in the Eastern Gulf of Finland National Park.

Former fishing bases with cottages, waterside sheds and boat docks have been preserved in the Rahja archipelago. You can see these temporary dwelling sites on the islands of Lepänen, Korkeakari, Hevoskari and Hyönä. In the archipelago, the grey fishermen’s cottages, surrounded by meadows and wooded pastures, are signs of people who used to live on the islands for centuries.

Unlike the open coast typical of the Bothnian Bay, the Rahja archipelago is broken and small in scale. The inner archipelago is formed by wooded moraine and rocky islands. In the outer archipelago and in the maritime zone, you will find many barren islets that are important to birds, as well as islands characterised by heaths and stunted trees.

The most common forests in the archipelago are barren spruce forests and pine forests growing on rocks. Close to the shores, you will see lusher forest types: seaside herb-rich forests, as well as light-filled birch forests, which used to be pastures.

Thanks to the shelter provided by the archipelago, there are extensive seaside meadows on the mainland. A lush delta has been formed at the mouth of River Siiponjoki. 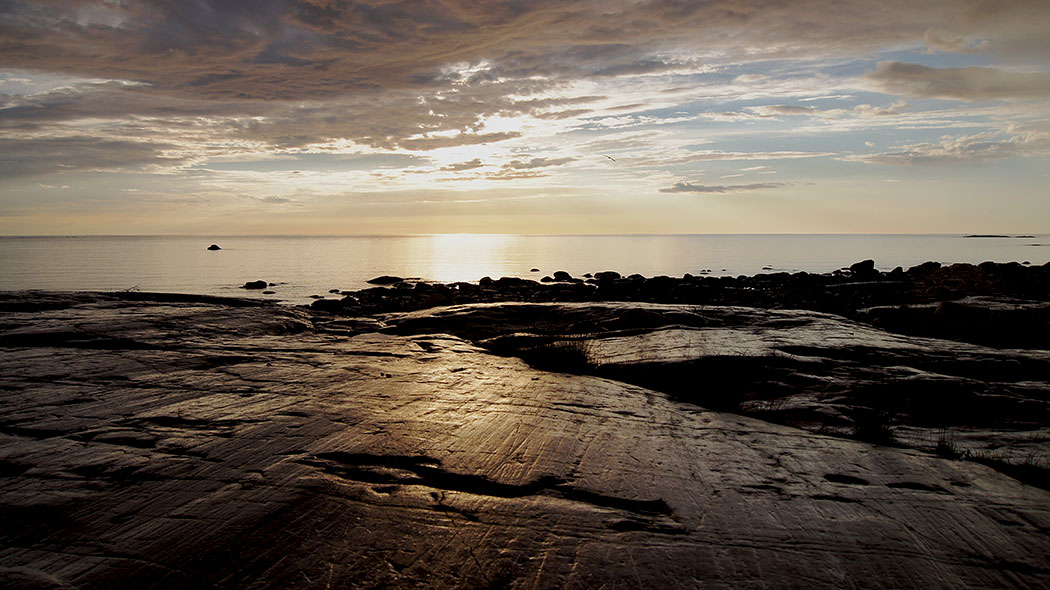 Oases of the Land Uplift Coast

Wide seaside meadows, with a large variety of species, are characteristic of the land uplift coast of Bothnian Bay. The plants on seaside meadows often form zones parallel to the shoreline. Each zone has its own species. The plants find themselves in a suitable habitat with regard to humidity, salinity, water level fluctuation, as well as the wear caused by waves and ice.

Flads and glo lakes are special features of the Ostrobothnian coast. Flads are shallow lagoons that gradually isolate from the sea, due to land uplift. After a flad has completely isolated from the sea, it becomes a small lake, i.e. a glo lake. The water of these small lakes is slightly saline, as seawater enters the lagoon through a threshold between the lake and the sea.

The vegetation of the flads and glo lakes is very lush. There are a large amount of nutrients, the habitat is sheltered and the water warms up quickly in spring. When the connection of a glo lake to the sea is cut, it becomes nutrient-poor, more shallow and finally transforms into a mire.

In spring, the flads are crowded as fish swim to spawn in the sheltered bays that warm up quickly. It means a feast for predators. The white-tailed eagle, the goosander, gulls and foxes go fishing at the mouths of the flads. A large number of birds nest on the reed beds and in shore forests, as the lush vegetation on the shores provides shelter and food for their young.

The birds in the Rahja archipelago are typical of the Bothnian Bay coast. The sea area and the outer archipelago are home to large gulls, such as great and lesser black-backed gulls, as well as the arctic skua, the ruddy turnstone and the black guillemot. In the inner archipelago, the islets and the waters between islands attract ducks, such as the velvet scoter, the goosander and the red-breasted merganser. Close to the mainland, you will see waterfowl that are common in the inland waters.

The arctic tern, the common ringed plover, the Eurasian oystercatcher and the ruddy turnstone nest on the sandy and gravel shores of the islands. The greylag goose needs a peaceful, grassy island or islet for nesting. The old-growth and decidual forests of the islands are homes to titmice, the Eurasian treecreeper, the European robin, the three-toed woodpecker and the black woodpecker. Grouse, hawks and owls also thrive in the archipelago forests.

The Rahja islands have functioned as pastures for centuries. In early June, horses and sheep were transported to the islands, where they were allowed to graze freely until August or even October. It is known that at its best, there were about two hundred horses on the pastures of Pappilankari and Alajoenkari. The largest meadows and mires on the island were mowed for winter fodder for the cattle.
Thanks to grazing, the shore forests became light-filled, sparsely wooded pastures where the wild strawberry and the arctic bramble thrived. The archipelago’s vitamin bomb, i.e. the sea buckthorn, also benefited from grazing. Some of the former sheep pastures can still be recognised on the basis of the sea buckthorn shrubs.

In the Rahja archipelago, traditional ways of land use have been revived. Sheep graze again on many of the islands, such as on Kurvonen Island. Overgrown pastures and seaside meadows have been cleared. They have also started to mow the shore meadows of the delta of the River Siiponjoki.