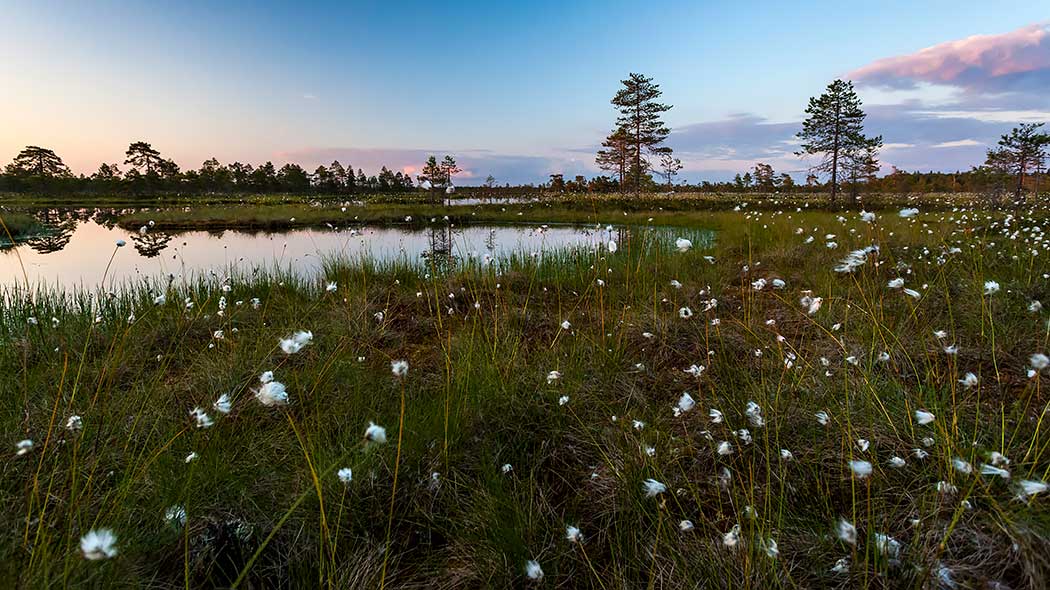 The extensive raised bog of Kauhaneva, Pohjankangas esker forests and Katikankanjoni ravine: the treasures of Kauhaneva-Pohjankangas National Park. Kauhaneva is an internationally significant mire. During spring time, the birds of the mire create a cacophony of sound but in the winter, there is nothing but silence in the mire. 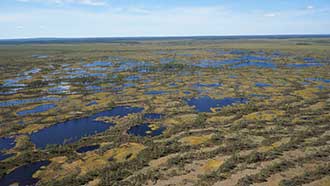 Treasures of the mire environment 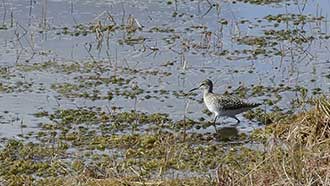 The wood sandpiper and the park's other birds

The regional emblem of the National Park is the wood sandpiper (Tringa glareola). Can you pick out it’s mating call from the concerto of other bird’s songs in the park? Read more > 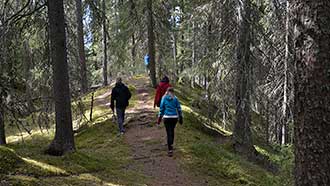 Easy walking on the esker 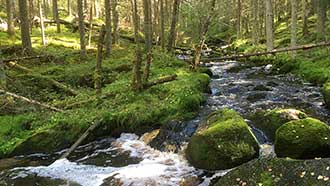 The waters have forged a spectacular ravine in the sandy soil. From the top, a fairy-tale view opens up to the bottom of the ravine, where you can hear a stream babbling. Read more > 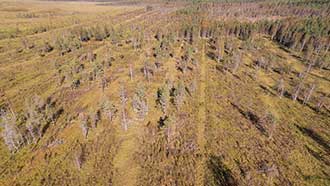 Mires in their natural state

Mires that were once drained are restored to their natural state. Ditches that were once filled by machines can still be seen in the terrain 10-15 years later. On aerial images they appear as stripes. Read more > 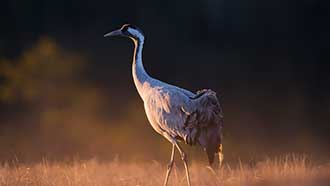 Birds that are sensitive to disturbances require space and peace during their nesting period. In the restricted zones movement is prohibited between 1 April and 15 September (julkaisut.metsa.fi). Open >

Treasures of the Mire Environment 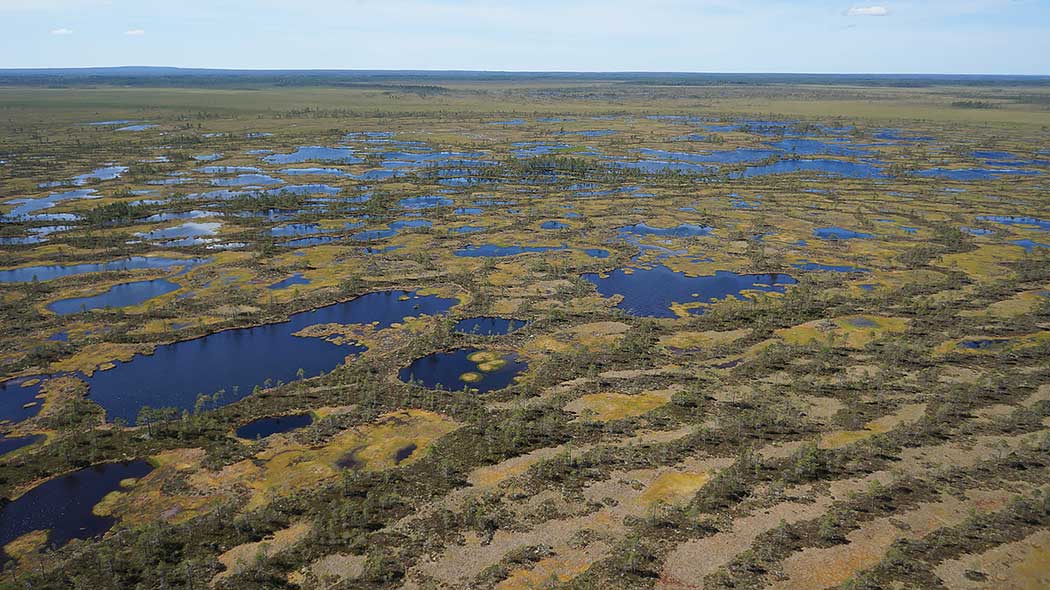 In South Ostrobothnia Region, Kauhaneva is the largest raised bog with hummocks. Together with Kampinkeidas Mire on its north-west side, it forms an internationally important mire complex.

Raised bogs consist of drier hummocks and between them deceitfully soft and wet hollows, or puddles with open water. On the dry hummocks grow Sphagnum moss (Sphagnum sp), and sparse tortuous pines (Pinus sylvestris). Large puddles between the hummocks are a good habitat for mire birds. On Kauhaneva, there are hundreds of puddles with clear open water.

Kauhaneva Mire has three centres, where around a puddle there are circular formations of hummocks. Outside these centres is a soggy fen, which in the south turns into huge open aapa-like mire. The open aapa-like mires have more nutrients, as they get addition from the surrounding mineral soils during the spring floods.

Springs Bring Oxygen to the Fens

Kauhaneva also has spring fens which the area’s groundwater springs supply with clear, cold water. The water remains at an even temperature round the year, and thanks to the flow, it is rich in oxygen. The spring fens offer habitat for a unique selection of species. The nutrient-rich, fresh waters of the spring fens are home to such plants as the greater tussock-sedge (Carex paniculata), the fibrous tussock-sedge (Carex appropinquata) and Herzogiella turfacea mosse. Spring fens are relatively rare in Southern Finland.

The Wood sandpiper and the Park's Other Birds 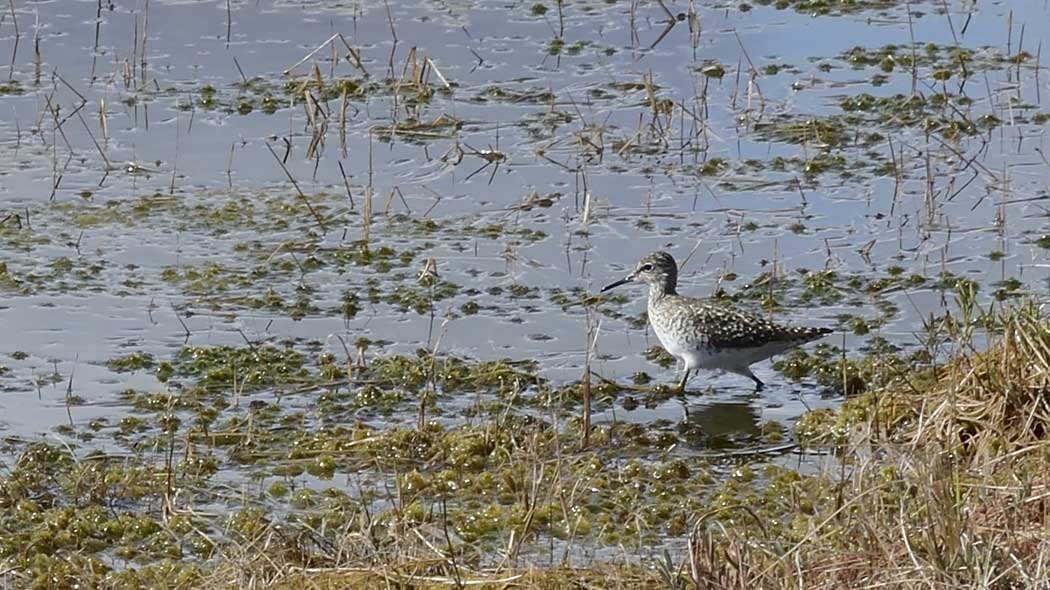 The wood sandpiper (Tringa glareola) is the most common wader species in the mires of Kauhaneva. This species has declined slightly in recent years, and it has been declared one of the regionally endangered species in southern Finland. During late spring and early summer, you can hear its rhythmical mating call in the open mires of the National Park. The bird makes its nest in a sedge tussock. While the mates take turns sitting on the eggs, the male is left to look after the chicks as the female already migrates south in June.

Easy Walking on the Esker 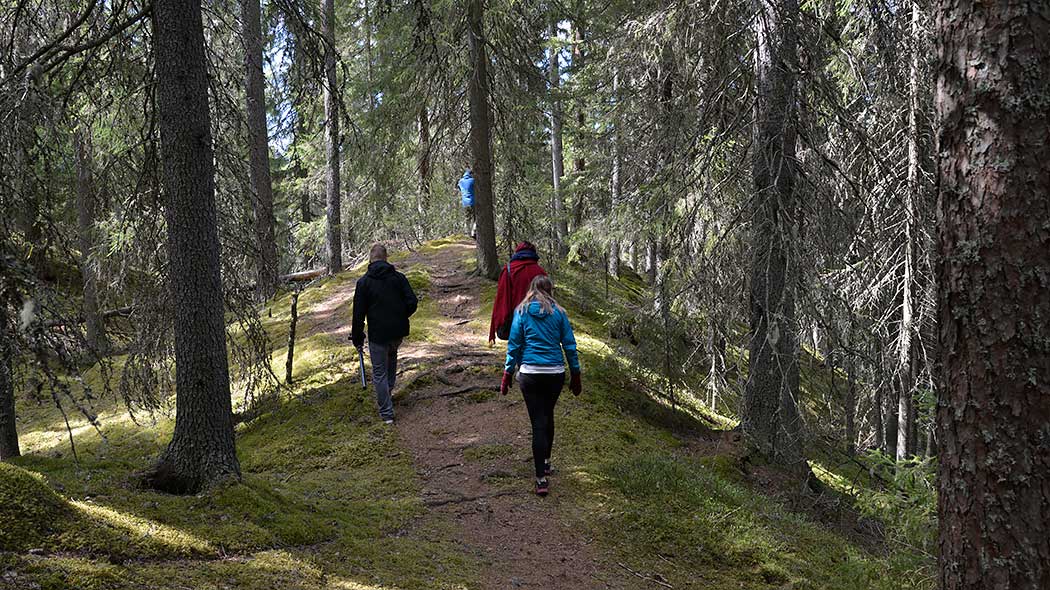 Pohjankangas is part of the esker formation of Western Finland, which starts at Hämeenkangas running west, and continues as Pohjankangas running north up to the boundary of the South Ostrobothnia region. The forests are dry and barren heaths growing pine. The ground layer is dominated by reindeer lichen (Cladonia rangiferina) and Big Red Stem Moss (Pleurozium schreberi). Other indicator plants of Pohjankangas include the Heather (Calluna vulgaris), the Lingonberry (Vaccinium vitis-idaea) and the Bearberry (Arctostaphylos uva-ursi) .

On the barren and light pine heath lives also the European Nightjar (Caprimulgus europeaus). Its hypnotic churring can be heard in the light summer night, but the bird itself is not often seen, due to its excellent protective colouring. The morning song of the Common Redstart (Phoenicurus phoenicurus) can, in the summer, begin already at midnight. 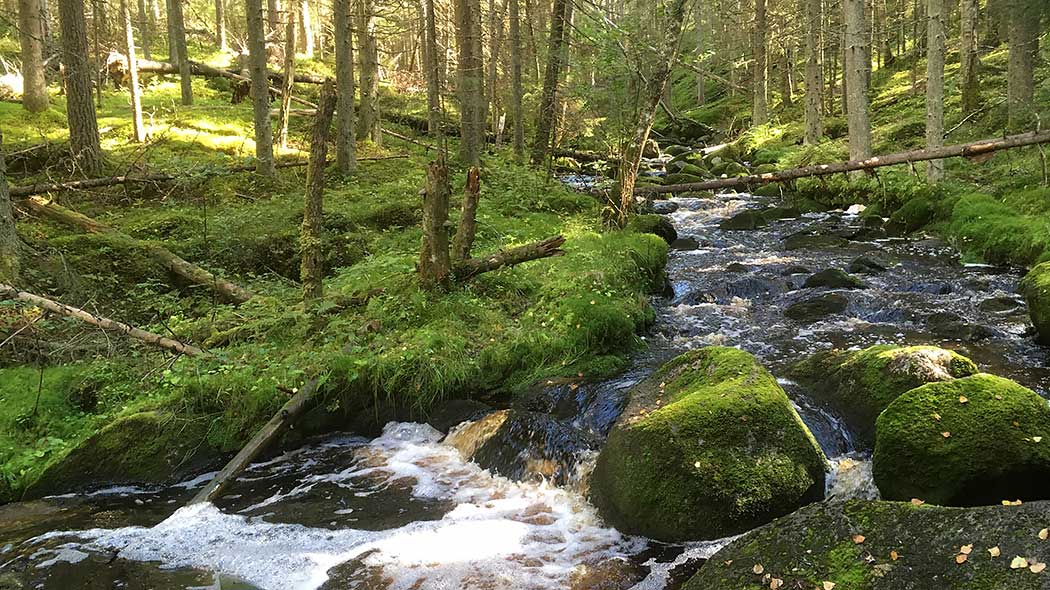 Katikankanjoni ravine along the western side of the park was created in the last 9,000 years. The waters discharging from Kauhaneva mire and Kauhajärvi Lake have gouged a dense network of rivulets in the sandy soil. The steep slopes of the streams and the verdant spruce forests around them set the mood for this fairy-tale forest. The meandering stream at the bottom of the ravine continues to shape the landscape even today.

Kolmentuulenlakki is a triangular sand ridge with steep sides rising 15 metres above the stream valleys around it. It was created as the streams eroded the soil around it. The level area at the top was a popular place for Midsummer night’s and other celebrations in the past.

Returning the Mires back to their Natural State 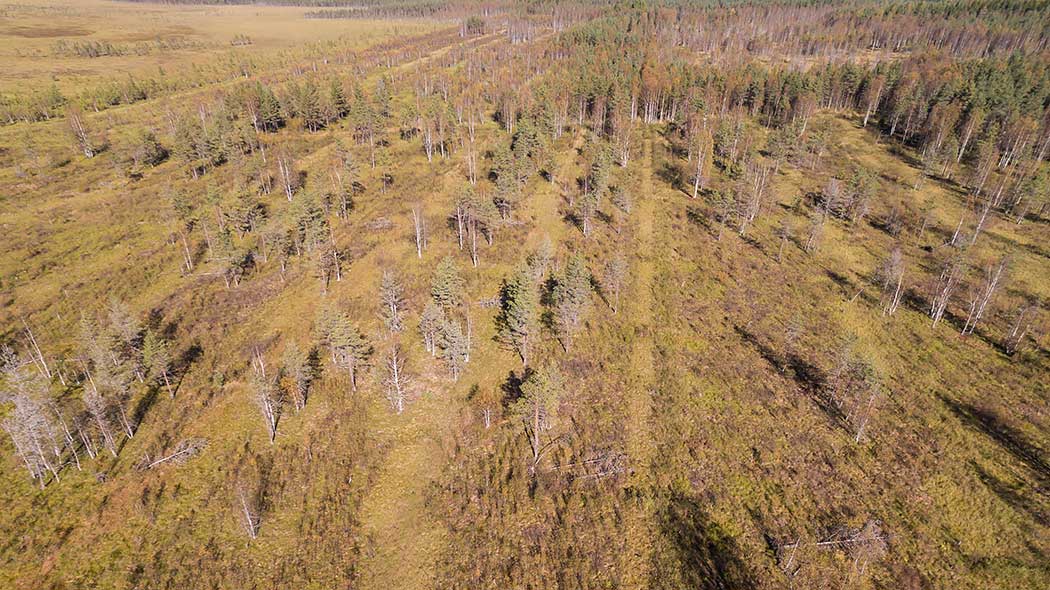 On Kauhaneva Mire, the edged were drained during the 1960s and 70s. Today, the mires are being restored back to their natural state (metsa.fi). This means that the ditches which were dug earlier, are blocked, and the trees, which have grown because of draining, are felled. The aim is to get the water to rise back to the original level, and to reduce the evaporation by the trees, so that the original mire vegetation, which has partly disappeared, could grow back. 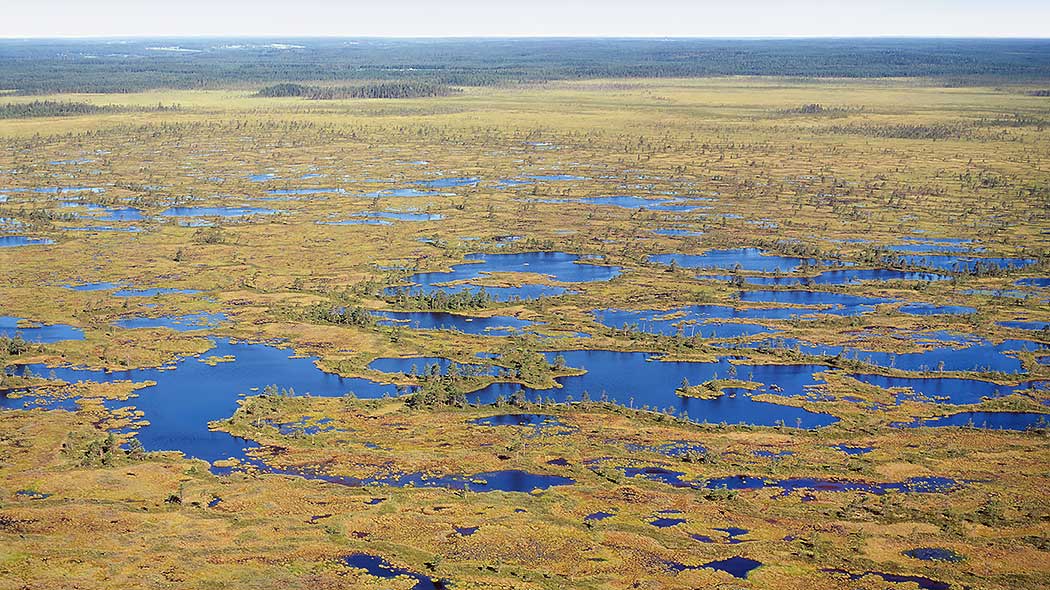 The significant geological formations and diverse mires of the area are an important criterion when the park seeks recognition as part of UNESCO’s international Geopark network.