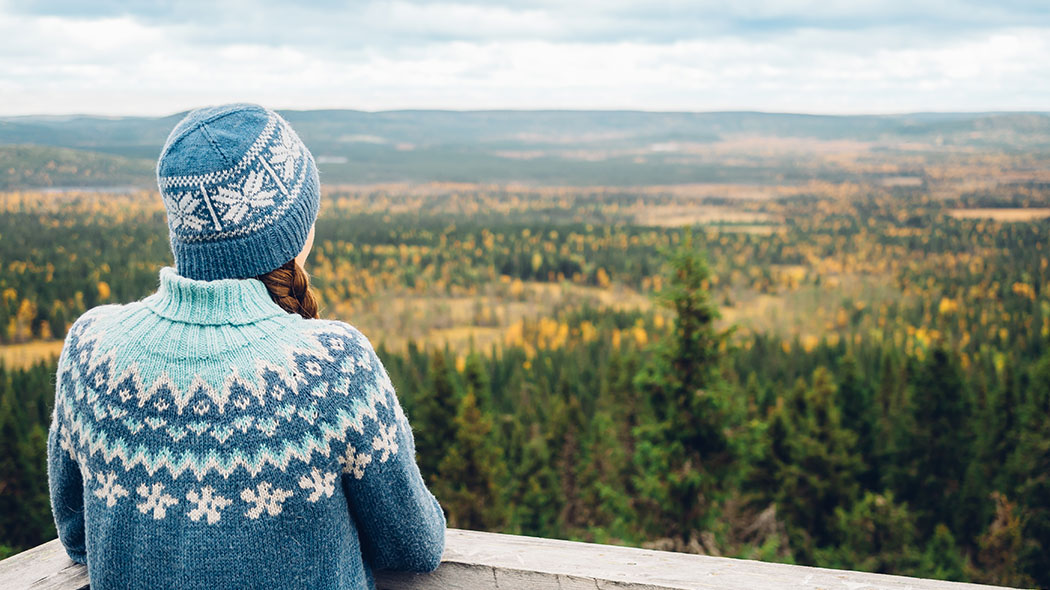 The wooded hills of Syöte National Park are covered with magical crown snow in the winter. The old trees provide shelter for a large number of rare species. Many of the mires have not been drained. 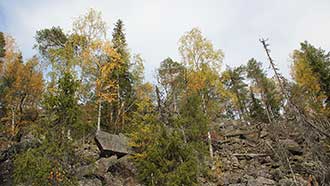 Scenic ravines and scree rock fields created by frost breaking the rocks. The rocky slopes of the ravines are home to rare and endangered species. Read more > 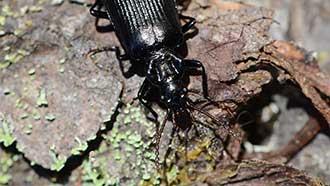 The orange sponge polypore decorates the trunks of decaying trees, where the pytho kolwensis beetle can also be found. The flying squirrel also lives in these forests. Read more > 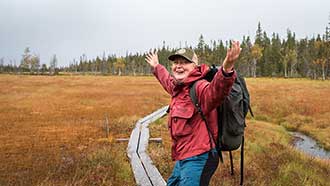 Experience the beauty of bogs in their natural state! Impressive hanging bogs can be found on the fells at an elevation of more than 300 metres. The large aapa mires are worth seeing. Read more > 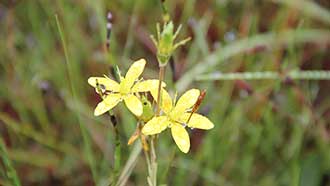 Only a few plant enthusiasts have been lucky enough to see this lovely mire plant in its natural environment. National Park is home to many beautiful and rare plant species. Read more > 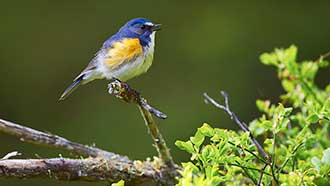 This eastern taiga bird is a rare sight whose song can be heard in Syöte in early summer. Read more > 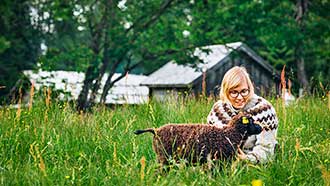 Try your hand at shepherding at Rytivaara Farm

Sheep manage the vegetation on the grounds of this 1800's crown tenant farm. As a result, plants like harebell and leathery grapefern have returned to the grounds. Read more > 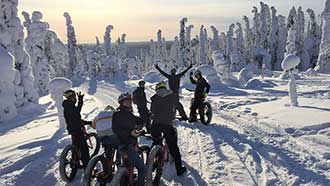 National parks are conservation areas. Please stay on the trails and take other people into consideration. Let's work together to care for the Syöte environment! Read more > 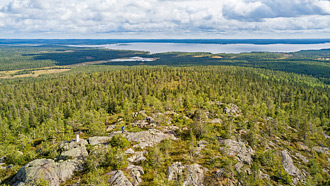 There are no litter receptacles in the national park. Responsible hikers leave no trace in nature! Read more >

Have you ever stopped and studied all the living organisms on the surface of a dead tree trunk lying by a path? Unknowingly, you may be standing next to a dead tree, which has spent hundreds of years in the forest, and which houses dozens and dozens of species from plants to mushrooms and micro-organisms. Take a small magnifying glass with you on your nature trail and spend a moment with plants!

The area around Vattukuru Ravine is a gorgeous place for studying small plants. On Lehtovaara Hill next to the ravine, there are lots of rocks covered in a variety of mosses and lichens. Pay also attention to the different small insects, which form the strong foundation of our nature: without ants, for instance, our forests would be a lot messier, as the busy workers continuously clean the forest surface from dead insects and small twigs.

The Ice Age meltwaters gouged majestic channels into the rocks of the Maaselkä area in Syöte, and Vattukuru and Portinkuru Ravines. Take a moment to stop in the ravine and think about how long it took for water to carve its route through the rock! In places, the ravines are as deep as 20 metres, and their massive rocky hillsides covered in tors provide a good habitat for many endangered plant species. One of these is zygodon moss (Zygodon conoideus), highly endangered in Finland. The plant is charmingly bright green and small in size, and its leaves resemble the Arctic starflower’s (Trientalis europaea) leaves in miniature size. 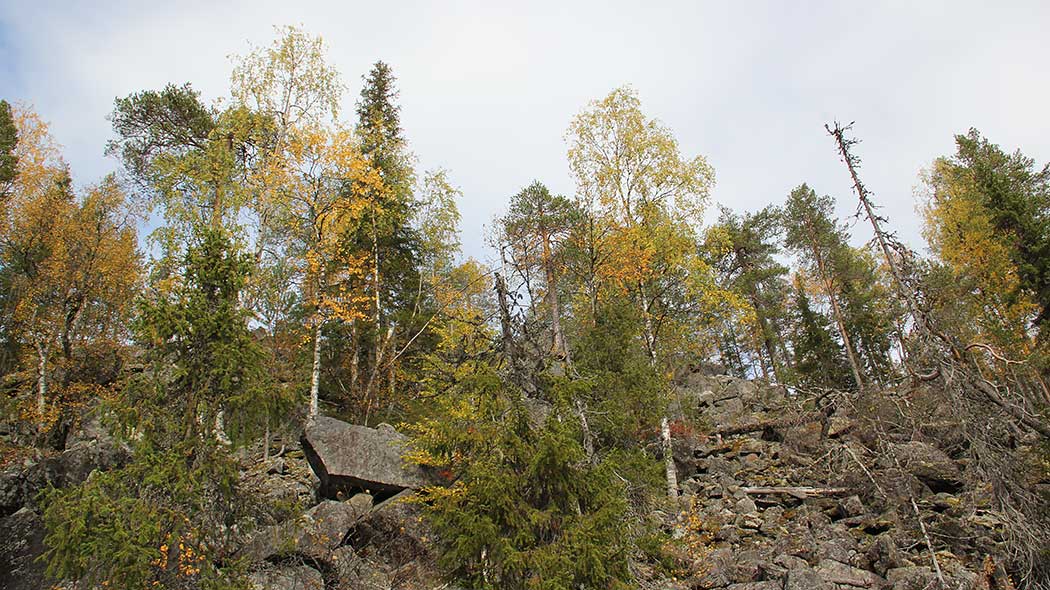 The rocky outcrops called tors are impressive formations. They have been shaped over several thousand years, as frost has broken rocks and left behind huge rocky fields. The rocky outcrops have usually been formed in places where ancient sea waves and ice age meltwaters have flushed the rock bare. Can you imagine what the landscape has looked like when water has covered the hilly forests, leaving only the hilltops visible? The most magnificent and easily accessible tor outcrops can be found in Vattukuru Ravine and along the route of Teerivaaran kierros day trail.

An endangered beetle (Pytho kolwensis) the false darkling beetle is crawling happily on a dead tree trunk. It feels at home in the base of the chunky tree in the damp forest. The darker the environment, the better the 1.5-centimetre-long beetle likes it! Another beetle species (Pytho abieticola) also thrives in the same area, utilising the top parts of the same dead trees. Natural life operates effectively in this tiny environment! 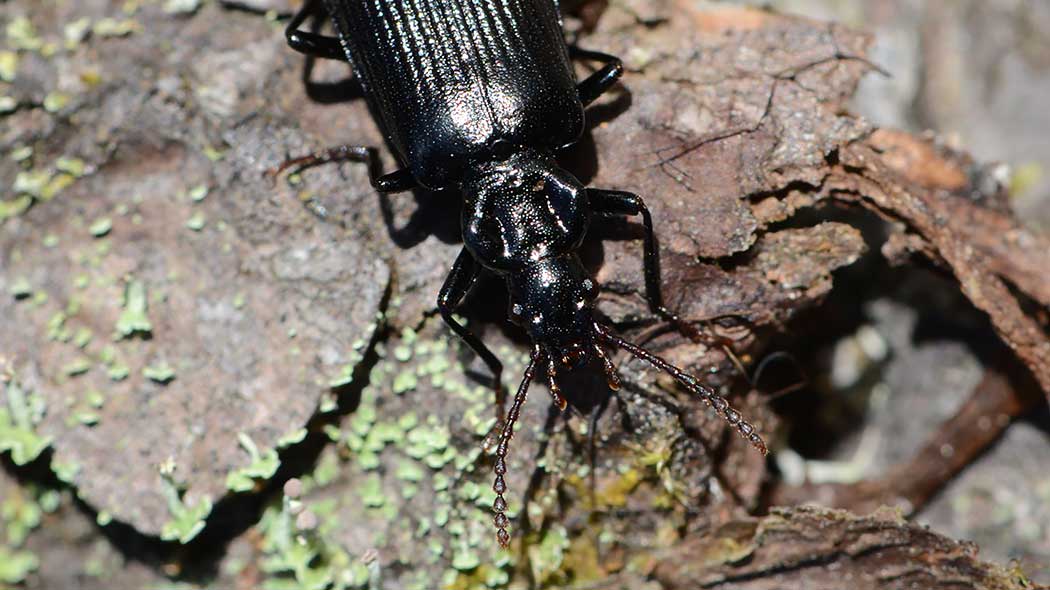 The first mentioned beetle (Pytho kolwensis) cannot lay its eggs more extensively, as the chain of dead trees does not reach far. The beetle is stuck in the oldest spruce forests of Syöte National Park, as is the case for the impressive orange sponge polypore (Pycnoporellus alboluteus). As much as one metre in diameter, the cream and orange polypore often hides under the bark of a dead spruce tree, but in the right environment of a shady spruce mire, a lucky hiker may have an opportunity to admire the gorgeous polypore in all its glory. Sixteen of the thirty Finnish habitats of the orange sponge polypore are located in Syöte National Park.

The rarity of Syöte National Park, a red-flanked bluetail (Tarsiger cyanurus), is also keen on shady spruce forests. Despite its bright colours, this small chat may be difficult to notice, but its unusual singing travels far, particularly during the spring mornings of May.  During the mating season, the male red-flanked bluetail can often be seen singing in a visible place, if a camper happens to walk by along its path. This little bird thrives along northern edges of hilly spruce forests, and in Finland, it can only be seen on the hill landscapes of Syöte, Kainuu and Kuusamo. The best places for spotting a red-flanked bluetail are in the Ahmavaara Hill, Maaselkä area and Romevaara Hill. 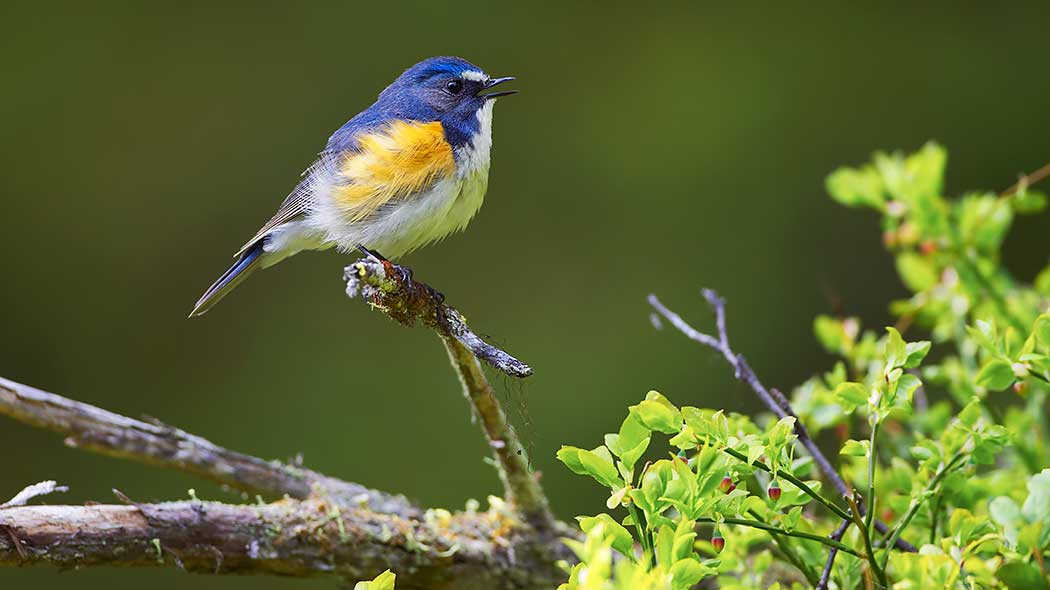 Another “flyer” characteristic of Syöte is a cute little mammal, which is extremely difficult to notice. The huge eyes of a Siberian flying squirrel (Pteromys volans) make nocturnal life easy for the species, but a camper has to be alert the dusk and carry a lucky charm in order to spot a flying squirrel. Flying squirrels live in deciduous-dominated mixed forests, and aspen leaves are their great delicacy. You can trace their tracks by piles of faeces: search for large trees with no branches covering the trunk on one side, as they provide great landing platforms for the flying squirrel, which can fly as far as 80 metres. As it lands on the trunk, the impact empties the squirrel's bowels, and poop looking like a pile of sunflower seeds is left behind at the bottom of the tree. In winter, the flying squirrel sometimes moves along the snow surface: it jumps forward with its front paws in the front and hind legs at the back, unlike our ordinary squirrel, whose traces show that the larger hind paws are in the front and smaller front paws at the back. 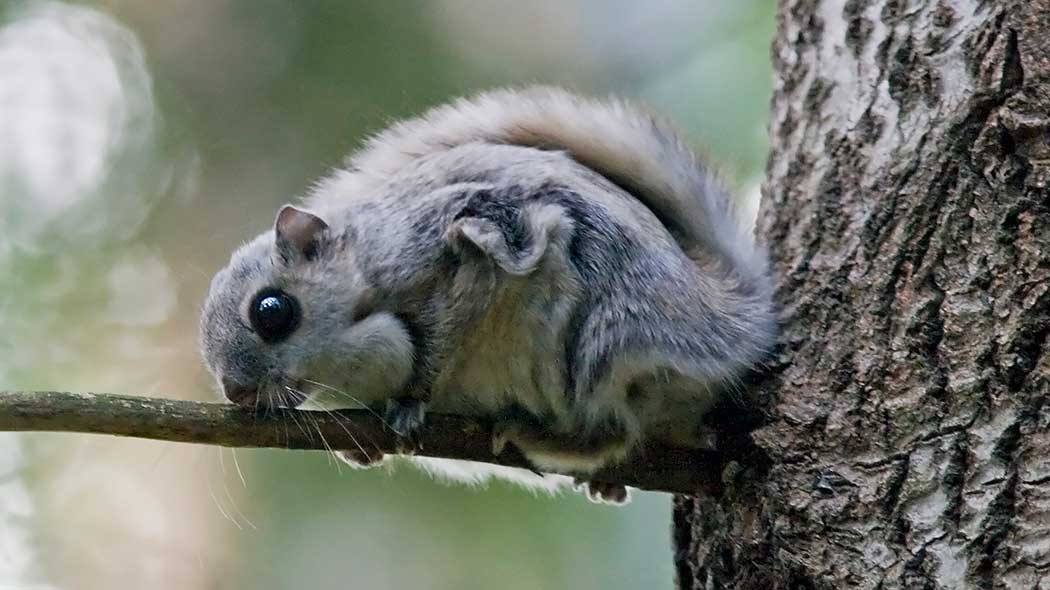 An old forest provides a habitat for various other endangered species or species needing special protection. A lucky person climbing to the top of Ahmakallio observation tower can spot a golden eagle (Aquila chrysaetos) flying above the forests of Syöte. In the depth of the forest, you can bump into a Siberian jay (Perisoreus infaustus), Siberian tit (Poecile cinctus), capercaillie (Tetrao urogallus) and a red-crowned black woodpecker (Dryocopus martius). The Ahmavaara (Wolverine Hill) area has been named after one of our large predators, the wolverine (Gulo gulo), and traces of all four large predators can be found in the area.

In the early summer, the mire is painted white by hare’s tail cottongrass (Eriophorum vaginatum). Later it is covered by heath spotted-orchid (Dactylorhiza maculata) and cloudberry flowers (Rubus chamaemorus), and if the harvest is plentiful, the mires are busy with berry-pickers in welly boots, particularly towards the end of summer. In the summer, the mires can be difficult to access and hard to walk on, but in the spring they are a camper’s dream with blankets of snow strong enough to support a person. 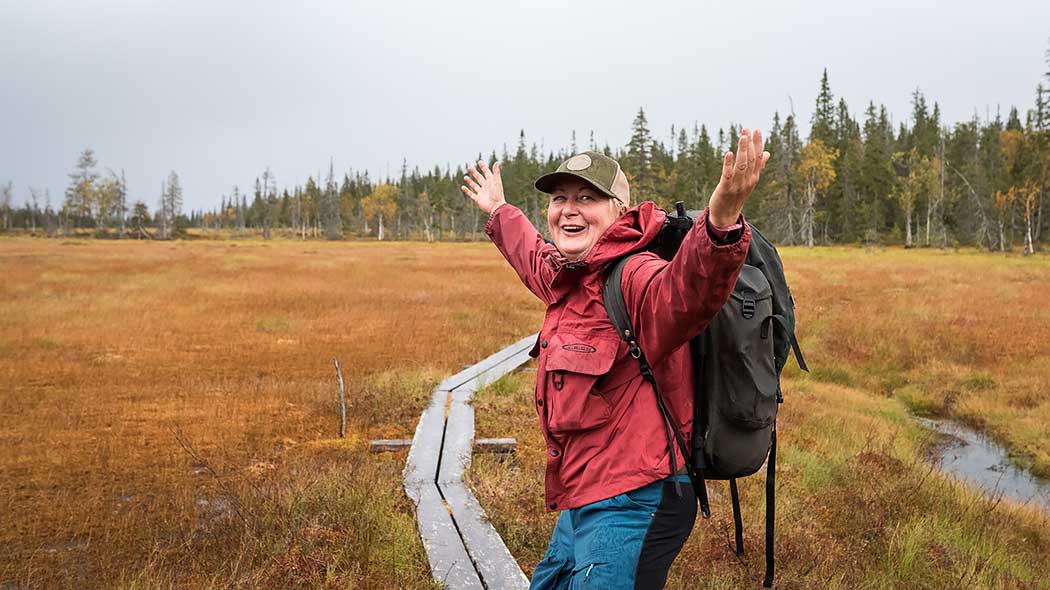 Aapa mires are a common mire type particularly in Northern Finland. The central part of the mire is damper than the edges, which makes it damper than the edges. The hilly landscapes of Syöte and the differences in elevation facilitate the formulation of aapa mires. The Rytivaara Trail passes by various typical aapa mires with ponds in the middle. The Huippupolku Trail observation point on top of Iso-Syöte Hill offers a view over the mosaic-like landscape formed by the mires and hills.

There are also various hanging bogs along the hill sides of Syöte National Park. A speciality of Koillismaa and Eastern Lapland, this bog type is a subtype of aapa mire. Hanging bogs are formed particularly on hill sides where streams of water flow from springs or as a result of because of abundant rain. Syöte is the most snowy area of Finland, which makes the circumstances perfect for hanging bogs to form: their development is facilitated by high humidity and a cool climate.

Lush habitats are a haven for rarities

Can you guess which plant species is the most sought after, according to the customer advisers of Syöte Visitor Centre? It flowers in black and has white, petal-like bracts.

It is the dwarf cornel or bunchberry (Cornus suecica). It flowers in profusion particularly in damp areas between June and July, and the white bracts really make it stand out from the ground. As autumn comes, the flowers turn into clusters of berries. Particularly during the autumn when the low-growing shrubs turn colourful, its bright red berries and reddish leaves dominate the autumnal landscape in Syöte. Dwarf cornel berries are not poisonous, but they have a very bland flavour. However, these berries are a delicacy of grouses, forest birds belonging to the subfamily Tetraoninae.

Another plant attracting the campers’ attention is the heath spotted-orchid (Dactylorhiza maculata). Its gorgeous, pale purple and rosy red flowers glow in the Syöte mires, and the plant is very easily recognisable. The heath spotted-orchid is Finland’s most common orchid. It is, however, related to various other rare plants, such as the calypso orchid, also known as Venus´ slipper or fairy slipper (Calypso bulbosa), which has also been spotted in the Syöte National Park. 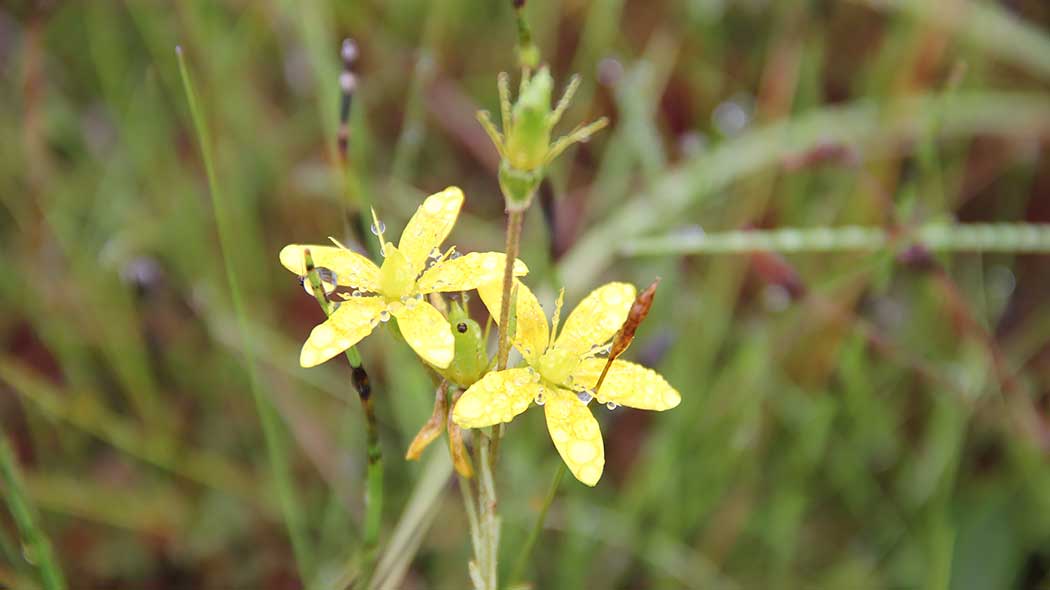 In addition to the calypso orchid and other rare plants such as the flecked marsh orchid (Dactylorhiza incarnata subsp. Cruenta) and the narrow-leaved marsh orchid (Dactylorhiza traunsteineri), the rich fens of Syöte are also home to species such as yellow marsh saxifrage (Saxifraga hirculus), a fabulous plant blooming in yellow, which thrives in a calcium-rich, lush environment. Campers should keep their eyes peeled when visiting Kouva in the northern part of Syöte National Park: at points, the calcareous cliffs of Kouva descend nearly vertically toward the Kouvanjärvi Lake, offering a majestic view as well as important nutrients for these rarities of the plant world.