The impressive view from the top of Olhavanvuori Rock streches out above forests and Lake Olhavanlampi. The cliff drops 50 metres vertically to the lake shore right at your feet. From there the lake looks like a small nest in the middle of the massive forest. A Red-throated Diver (Gavia stellata) can often be seen gliding peacefully across the water. If on Karhulahdentie Road the shore of Lake Olhavanlampi is worthwhile stop, because from there you can admire the massive cliff-face of Olhavanvuori Rock. On calm sunny summer days the cliff glows in hundreds of colours, which are reflected on the lake surface. 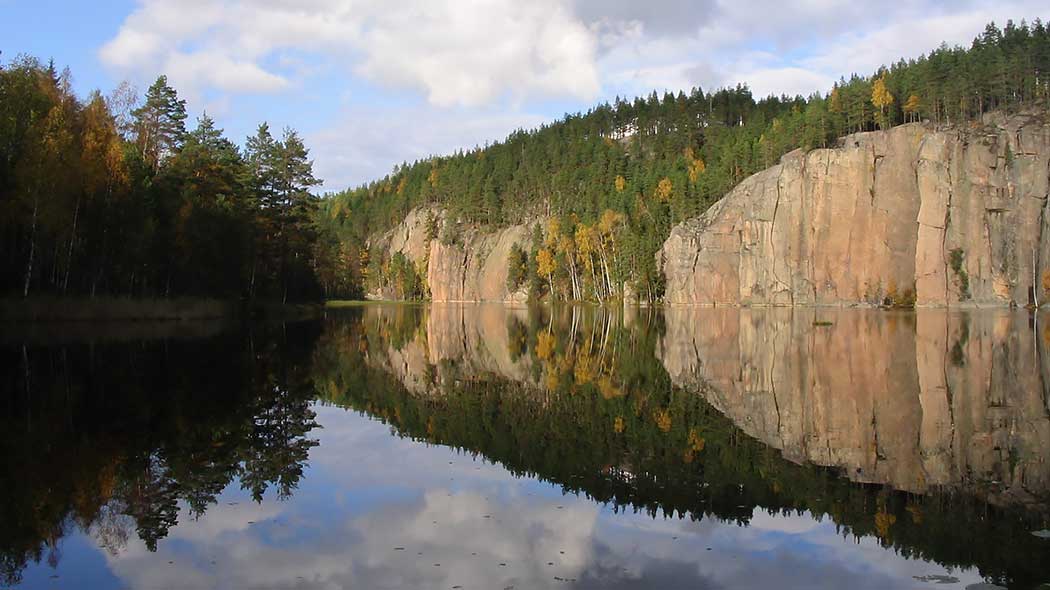 The climb to the top of Mustalamminvuori Hill is demanding and it is just as difficult to decend, but the view from the top makes the effort worthwhile. When the weather is good you get a clear view of practically the entire park from the scenic lookout tower. No man-made structures catch the eye in the middle of the lush continuous forest. The water of Ruskiansalmi Sound glimmers between two capes. 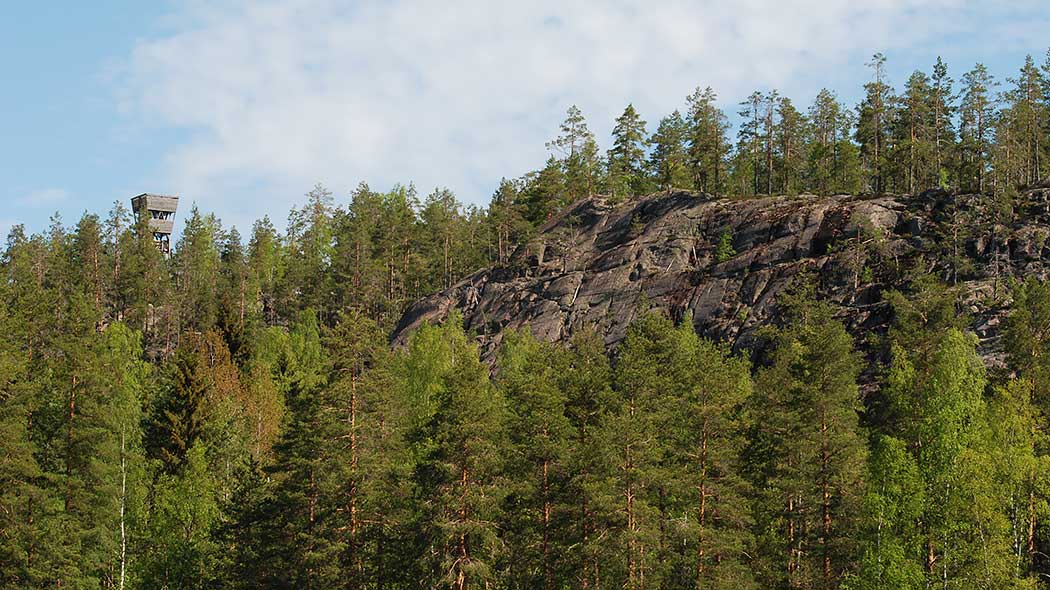 The new Lapinsalmi bridge was opened in November 2019. The bridge is 55 metres long and crosses The Lapinsalmi Sound in 12 metres height. There are no restrictions regarding to the number of persons on the bridge like before.

A set of steps rises almost vertically up the side of Katajavuori Hill. This is one of the most scenic places in Repovesi National Park. Visitors feel at peace, when surrounded by such beauty. 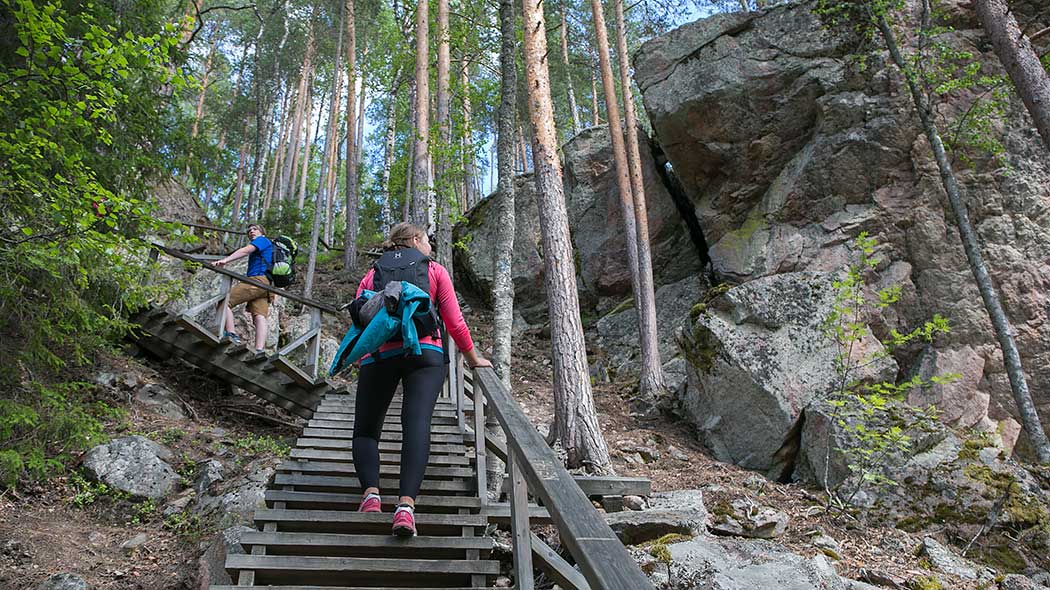 There are signs of the prehistory at Olhavanvuori Rock. In the year 2000 a rock painting representing a human hand was found there. Prehistoric drawings have previously been found in Löppönen Cave near Lake Repovesi at the south end of Ruskiansalmi Sound.

The Collapsed Cliff at Kuutinlahti Bay

The collapsed cliff at Kuutinlahti Bay also bares evidence of man's prehistory. Kuutinvuori Hill collapsed about 9300 years ago. Duckboards have been laid across the boulder soil. Many concerts have been held at the site and the bay has fabulous acoustics. 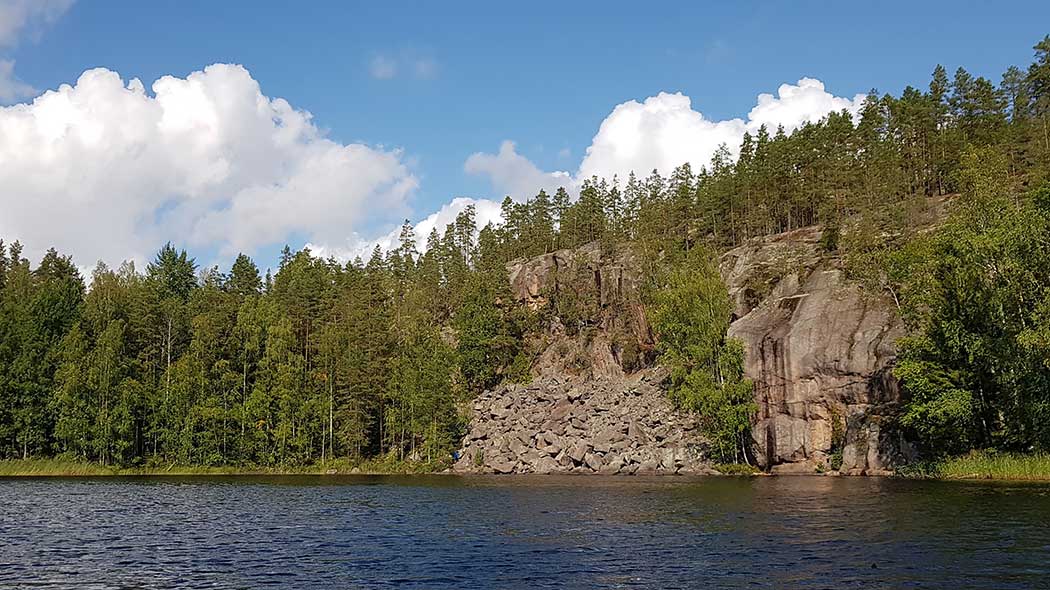 Kuutinkanava Canal is an old log floating flume. It made it possible to float logs straight from Lake Tervajärvi into Lake Repovesi. The canal was built in 1912 and it is 270 metres long. Originally, the canal was surfaced with stones, but not enough water flowed through it. It was replaced by a wooden flume better suited for log floating. The last time logs rattled through it was in 1968. This tar-scented memory of the log-floating times restored in 1996. Tar was used to preserve wood surfaces, which were constantly submerged in water. There is a campfire site with a dry toilet and stages for canoes and boats by the canal at the Kuutinlahti Bay.

In the old days Kirnuhuoko Cavern with its 10 to 15 metre rock walls and roof which shield it from the world was used as a place for illegal spirit distilling (in Finnish called ‘pontikka').

Near Lake Repovesi is Elving Tower. It is over a 20-metres-tall, eight-sided, white tower, which stands out in these surroundings. The honorary mining counsellor Rudolf Elving had the tower built between 1905 and 1907. The tower was used as a look-out for forest fires and illegal hunting and fishing. During wartime it was used by the Women's Auxiliary as a look-out for air-attacks. The tower is located on the road leading to Orilampi on the cape of Kirjokiven kartano, an old manor, which offers nowadays services for tourists. The tower has been restored and is open for visitors during summer. Visitors can climb to the top of the tower and see the view of Lake Repovesi from this direction for a fee. The tower is not managed by Metsähallitus. The maintenance of the tower is performed by LC Valkeala. For more information on sightseeings in the area; read here (visitkouvola.fi). 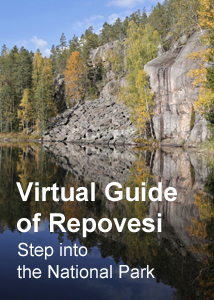