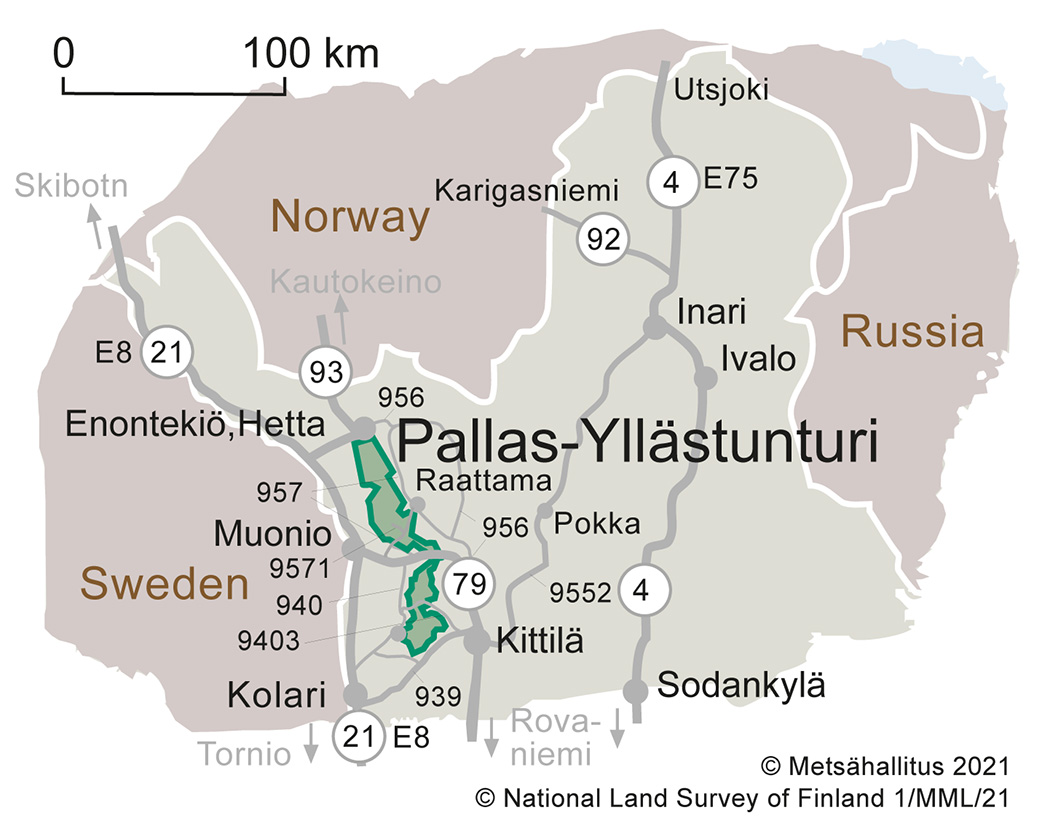 Pallas-Yllästunturi National Park is located in the fell area between Kolari, Kittilä, Muonio and Enontekiö. It is 35 km from Kolari, 40 km from Kittilä, 165 km from Rovaniemi and 3.5 km from Hetta. The nearest airport is in Kittilä and the nearest railway station is in Kolari.

The easiest way to access the hiking trails is via the national park’s visitor centres. Pallas-Yllästunturi National Park covers a wide area and there are several starting points for the trails. The visitor centres provide the best advice for different parts of the park. The starting points of the hiking trails are shown in the trail descriptions.

The excursion map below lists all the services in the national park. You can move the map with the mouse and zoom in or out with the +/- buttons. The icons on the right show different route types and rest points.

By Bus to Pallas-Yllästunturi

On weekdays, you can get from Muonio to Pallastunturi by bus (matkahuolto.fi), which continues to Kittilä. On the way back from Kittilä, the bus goes via Pallastunturi if necessary. Some of the Rovaniemi – Muonio – Hetta buses go via Hotel Jeris, which is a 14 km taxi ride from Pallastunturi (tormaslompolo.com). The bus route from Tromsø to Rovaniemi (thearcticroute.com) runs via Muonio and Kittilä.

By Train to Kolari or Rovaniemi

During high season, you can get from Kolari railway station to Enontekiö’s Hetta by pre-booking a taxi (uusitalontaksit.fi, in Finnish), which will go via Pallastunturi, Raattama and Ketomella. There is a daily bus service from Rovaniemi to Hetta (matkahuolto.fi) via Muonio.

By pre-booking a taxi (taxihietala.com), you can get from Kolari train station to Muonio and to other destinations for an additional fee. During the high season, there is a pre-bookable taxi service (matkahuolto.fi), which runs via Muonio to Hotel Jeris, Pallastunturi, Hotel Vuontispirtti and Hetta in Enontekiö. There is a daily bus connection (matkahuolto.fi) from Rovaniemi railway station to Muonio.

Partner companies offer taxi and car transfer services in and around the Pallas-Yllästunturi National Park.

By Car to Pallas-Yllästunturi

Yllästunturi Visitor Centre Kellokas, Tunturintie 54, 95970 Äkäslompolo, Kolari. The parking area has space for about 100 cars and several buses during the summer. In winter, there is room for about 50–60 cars.

The nearest airport is located in Kittilä (finavia.fi). There are only charter flights to Enontekiö Airport.

From Kittilä Airport, you can get to Hetta in Enontekiö by regular bus service (matkahuolto.fi) or by taxi (tosilappi.fi), which must be booked in advance. 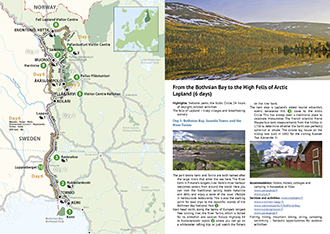