Life in the Backwoods

The area of Helvetinjärvi National Park has always been remote and sparsely populated. In the old days people's simple diet was supplemented by hunting, fishing and picking berries. The cattle grazed in the woods. Also tar burning was practiced, and there are still remains of old tar-burning pits in the area. In the backwoods distances were long. In the winter the mode of transport was skiing, in the summer it was walking. In the both ends of the long lakes there were boats for people to use. 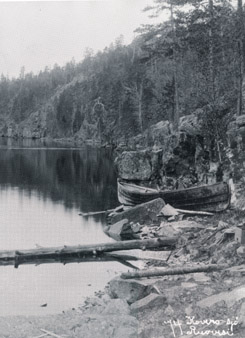 The commercial use of forest began here in 1800s. The River Haukkajoki and the long lines of lakes were used for floating the logs, and bicycle tracks were made in 1930s to make it easier for log floaters and forest workers to get to the logging site. In the 1950s the first forest roads were built. The most part of the National Park area is former commercial forest, and there are sapling stands and young forests especially in the middle parts of the Park.

To conserve the unique landscape and nature of the area, Metsähallitus established four landscape forests in the area. The first area to be protected was Helvetinkolu in the 1950s, then the shores of Lake Haukkajärvi in 1960s.

Helvetinkolu has been a well-known tourist attraction already in the 1800s. Many famous Finnish artists and authors, such as painter Akseli Gallen-Kallela and poet J.L.Runeberg , have admired the scenery. In the early 1890s Finnish artist Akseli Gallen-Kallela hiked in the Helvetinkolu Gorge area with another artist Louis Sparre. Sparre wrote a melancholic story about the trip called Muisto Helvitinjärveltä (a memory from Helvetinjärvi) in the 1891Young Finland Association Christmas Journal. Both artists immortalised the area's people and landscape in their works. Sparre's oil painting Päivällinen (supper) is a glimpse into the daily life at Rimmi Farm. Gallen-Kallela drew several sketches, for example pencil and marker drawings of the girls on Rimmi Farm at Koverojärvi and on Kuusimäki Farm at Helvetinjärvi as well as a sketch of the old man at sleeping on a bean in a barn at Rimmi Farm.

Youths from Ruotevesi used to flee "prayer Sunday" and gather at Helvetinkolu Gorge. "Prayer Sunday" was deemed a day prayer and dancing was forbidden. It is celebrated on the fifth Sunday after Easter. The Finnish name Rukous Sunnuntai = prayer Sunday is derived from the Roman congregations prayer processions in the 300s, at a point in history when Christian processions replaced pagan processions to the fields. The spring time processions lead through the fields and the partakers prayed and asked the coming crop to be blessed. The ban on dancing during prayer Sundays was terminated in the 1960s. In the 1920s Youth Association of Visuvesi built a day trip hut at Helvetinkolu, which can still be used by visitors today.

The Origin of the Name Helvetinjärvi

There is an old story about a warlock who lived in Sipilä. One day the master of the house Ruokkee went and took a pike from Sipilä´s fish trap. The warlock got very angry, and they had a heated fight. Afterwards the warlock cursed: "There is not going to be any pikes in this hell's lake as long as my nails are still soft." And from then on, nobody caught any pikes in the lake for ages.

The emblem of Helvetinjärvi National Park is Helvetinkolu Gorge.