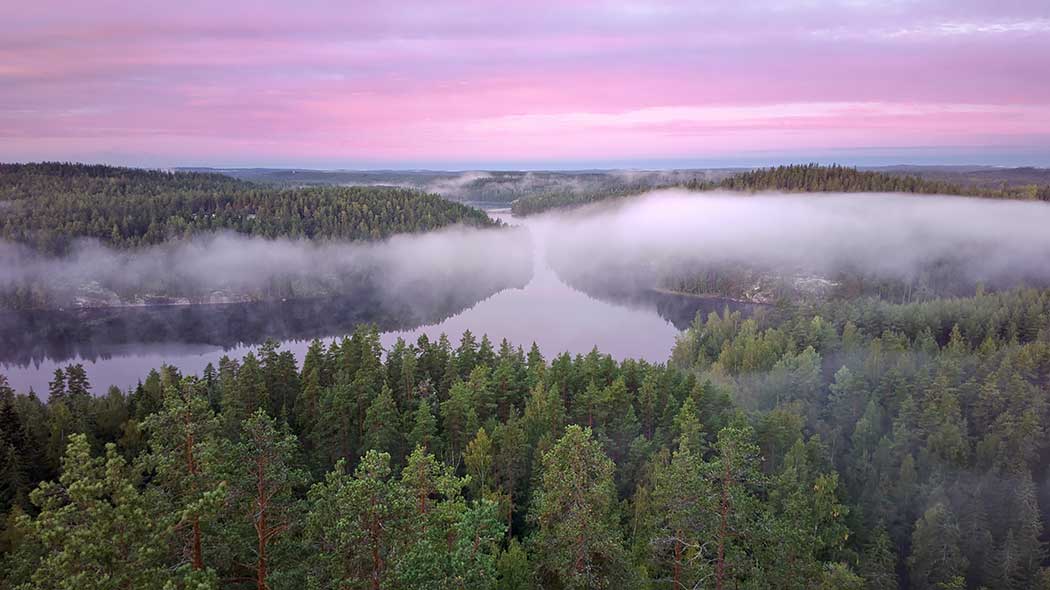 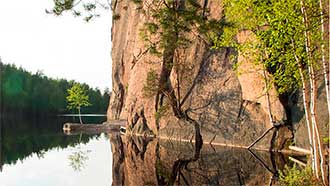 These magnificent hills are ancient granite that typically splits and chips at right angles. The local occurrences of red granite are world famous. Read more > 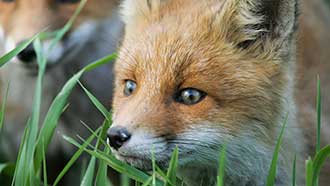 The fox is the emblem of Repovesi National Park. The red resident of Repovesi is a skilled hunter and small rodents aren’t safe even under the snow! Read more > 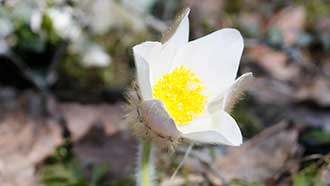 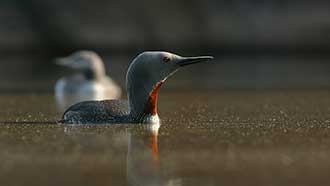 This timid wilderness bird is a well-known resident in the area. Its noisy mating rituals ring out from the forest ponds during the spring. Read more > 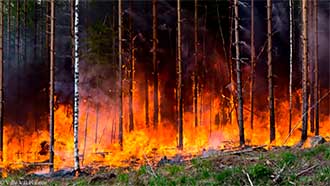 Fire as a tool for nature management 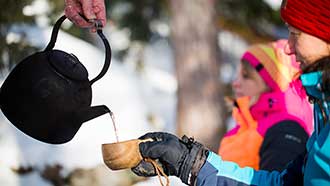 There are no litter receptacles in the national park. A responsible hiker brings their litter home, leaves no trace in nature and respects fellow hikers! Read more >

The rocky slopes on the northern flank of Salpausselkä offer views over a mosaic of small water bodies and forests. Good spots for admiring this splendid scenery include the tops of Katajavuori, Mustalamminvuori and Olhavanvuori. At Mustalammi viewing tower, you can climb even higher and experience the wilderness atmosphere in different seasons. 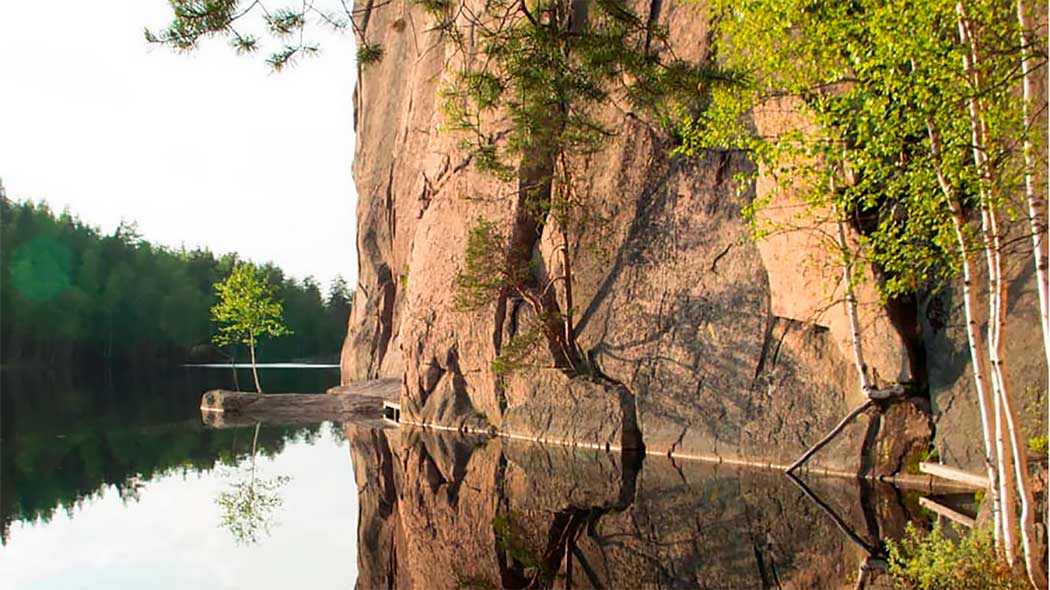 The rugged rock formations of Repovesi were sculpted by the Ice Age, which shaped their unique scenery and composition. The rockface of Olhava is a good example of crushed zones, which reflect the ice sheet's movement in the southeast-northwest direction. In sunny weather you can watch the play of light reveal ever-changing forms on the crags’ surface. Large chunks have split off from Olhava rockface over the centuries, the biggest ones of which can still be seen as small islands in Olhavanlampi Lake.

Both the Central Finland granite belt and the Vyborg rapakivi massif extend to the National Park’s area. The boundary between these two rock types traverses the area from east to west directly to the north of Lapinsalmi bridge.

Most of Repovesi area features hard Central Finland granite that is 1,900 million years old. The splitting at straight angles typical of granite can be seen in Kuutinlahti: the rock face of Kuutinvuori collapsed and created an impressive field of jagged rocks on the lakeshore approx. 9,300 years ago.

Repovesi area to the south of Lapinsalmi is part of Finland's largest outcrop of rapakivi, the Vyborg rapakivi massif, which is rare on the global scale. Rapakivi has a lower erosion tolerance than granite. This difference is reflected in the landscape: in rapakivi areas, the areas of exposed rock are much smaller than in the granite area, and their topography is flatter.

In Repovesi National Park's patchwork of high rocks, compact mires and rugged lakes lives a rather crafty soul made famous in folk tales, i.e. the fox. This russet canine has called Finland home for millennia. The fox is believed to have returned to Finland right after the Ice Age, along with the first mammal species. At the same time, the moose and wild hare also arrived from the southeast. 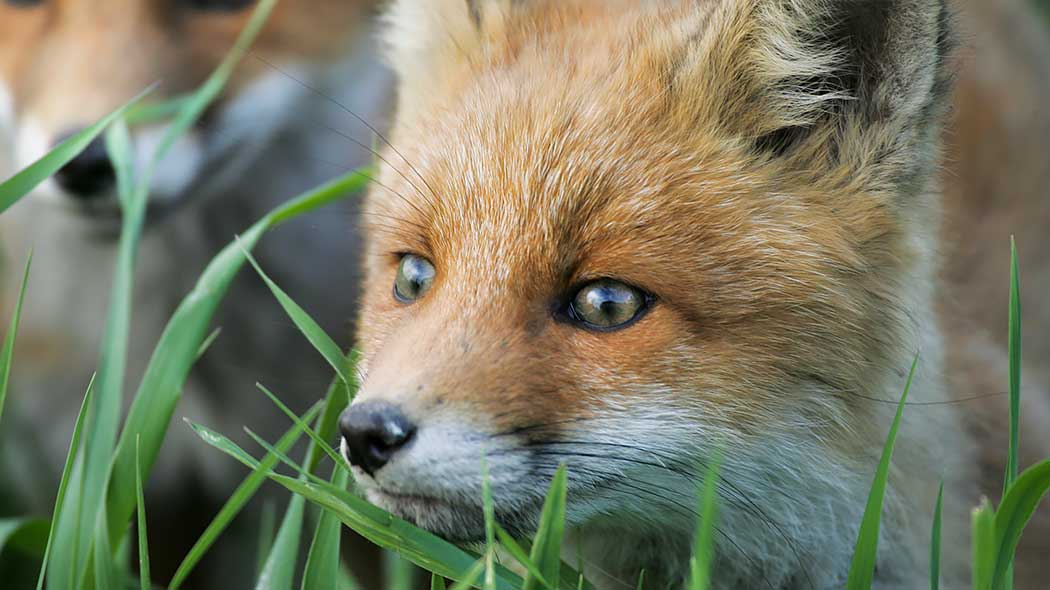 The fox is not as skittish as many other predators. Particularly at dusk or night, you might come across a fox on its nightly hunt. Its characteristic bushy tail, long legs and a more slender build than the raccoon dog help to distinguish the shadowy figure slinking in the darkness. Although foxes primarily feed on rodents, as omnivores, they also eat plants, berries and carrion. Foxes sometime bring prey into their dens to feed their cubs or store it in a cache for a later meal. Foxes dig out their own dens or they might also move into a cub warren made by another animal. It is also common for foxes to settle into a naturally-formed den, which might be connected to other holes that serve as their food cache. Foxes typically have litters of 2-12 cubs.

A thick, long tail indicates that the fox is healthy. When cold weather closes in, foxes curl up into a ball, using the tail to protect their paws and muzzle. If animals competed in track and field, the fox would be the sure winner in at least one event - the broad jump. Foxes, which pounce head first into the snow, are not only effective predators - they are fun to watch! Foxes generally trot. In the winter, fox tracks, dotting the snow like a string of pearls, reveal what they have been up to. Like the tracks of many wild canines, fox footprints have 4 toes with each claw showing quite clearly in front of each toeprint.

In Finnish folk tales, the fox is usually portrayed as a wily, clever and resourceful creature. It is widely considered to be a difficult animal to hunt. According to some folk beliefs, the fox is also responsible for causing the Northern Lights. The fur of an ancient fire-fox was believed to have made sparks as it brushed up against the fells of Lapland, thus setting the night sky alight with shimmering colours. Whereas many other languages refer to the northern location of the lights, the Finnish word for the Northern Lights, or 'Revontulet' comes from the ancient Finnish word for fox - Repo, i.e. 'fox fires'.

Many Species Thrive Deep in the Forests

Over half of Repovesi's trees are pines. In these pine-dominated heaths lingonberries, blueberries, lichens and moss thrive. Crustose lichens such as Arctoparmelia centrifuga spread over surface rock in green-grey circles and Cladonia coccifera´s bright red ends shine on the ground. Rare mushrooms can be found if one knows to look for Melanoleuca verrucipes in moose faeces or for Beaked Earthstars (Geastrum pectinatum) in anthills. In burnt forest clearings, the spring pasque flower reaches for the sun in spring. Also many different species of animals inhabit the heaths of Repovesi National Park in abundance. 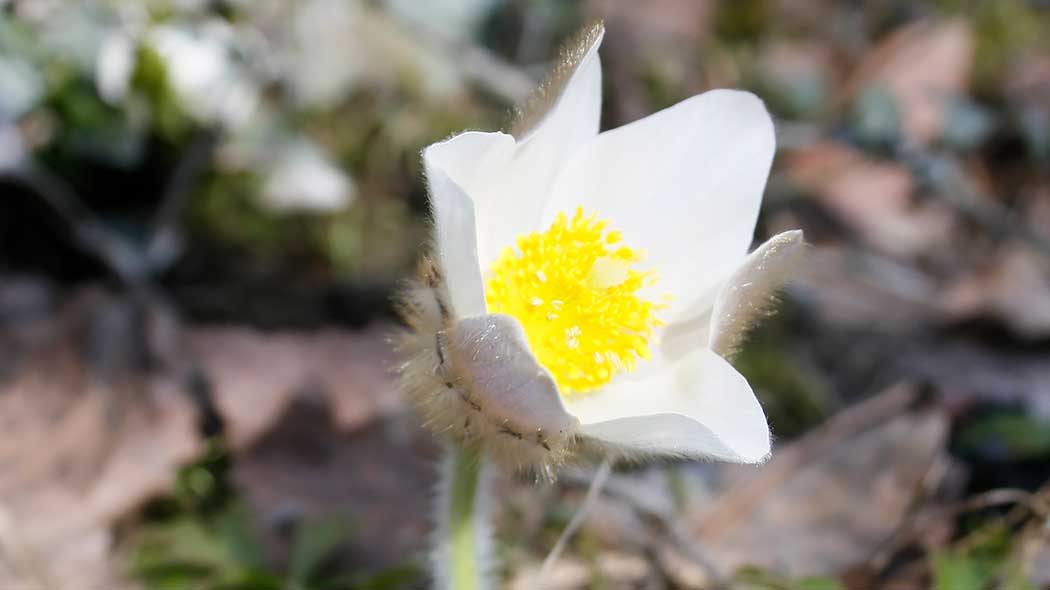 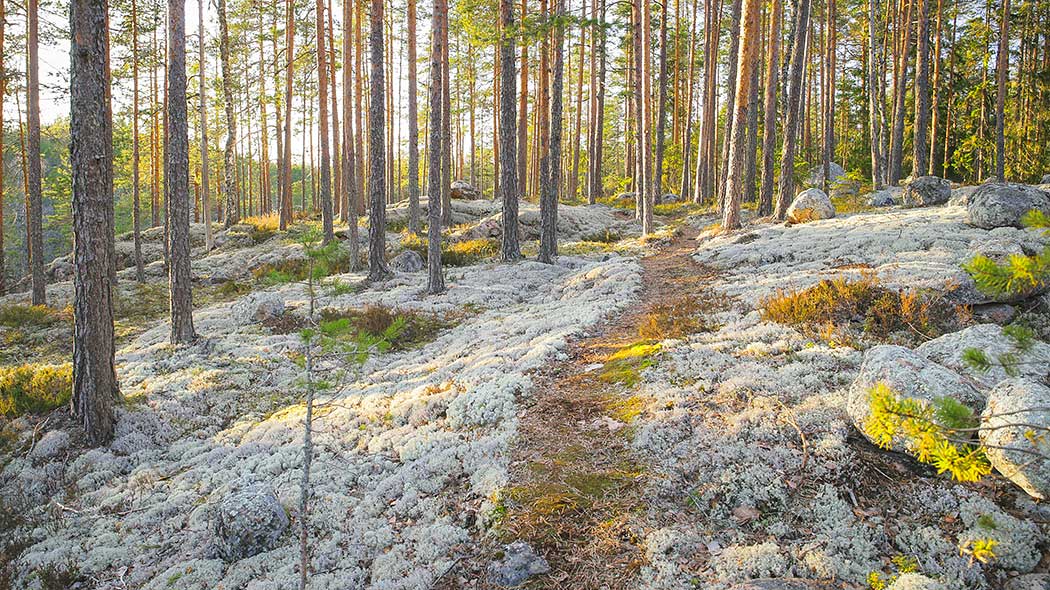 The oldest pines in Repovesi National Park are over 200 years old. They have not been logged because they grow on steep rocky hillsides. Birds that inhabit the haven of the old-growth forest are the Greenish Warbler (Phylloscopus trochiloides), the Red-breasted Flycatcher (Ficedula parva) and the Coal Tit (Parus ater). The Black Woodpecker (Dryocopus martius) can also be seen and heard quite often. The Three-toed Woodpecker (Picoides tridactylus) is the quiet pecker of the old pine forests. The bird that has most recently arrived at Repovesi is the Grey-headed Woodpecker (Picus canus).

Between high cliffs there are lush grove-like forests. In these areas the Littleleaf Linden (Tilia cordata), which is a rarity, can be found. On summer nights the wonderful smell of the Lesser Butterfly-Orchid (Platanthera bifolia) wafts over the herb-rich forests.

Spring floods on the one hand and dams built by Canadian Beavers (Castor Canadensis) on the other have caused flood meadows with common alder (Alnus glutinosa) to form around streams. These are cool and murky places even on sunny summer days. Birches tend to die standing up in flood meadows, which creates a superb environment for tinder polypore (Fomes fomentarius), birch polypore (Piptoporus betulinus) and Phellinus igniarius.

One of Finland's most populated Red-throated Diver (Gavia stellata) colonies nests on forest ponds in Repovesi National Park. The Red-throated Diver migrates to Repovesi in April or May to nest. They inhabit the mire-like shores of small lakes and ponds or sometimes on the edge of small pools in the middle of mires. Red-throated Divers are so loud at stating their intentions during mating season that hikers camping nearby will find it difficult to sleep. Especially at Lake Olhavanlampi the sounds echo off of cliffs. 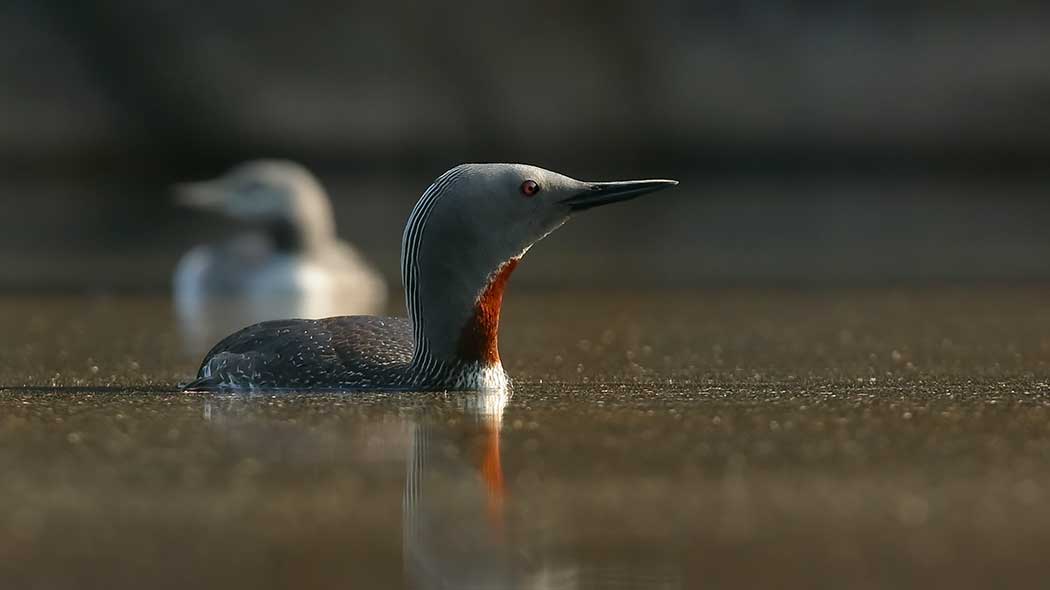 Life at the Ponds of the Red-throated Diver

In May and June the Red-Throated Diver (Gavia stellata) has its brooding season. It sits on its eggs in a nest, a top a floating turf island. In Repovesi National Park floating turf islands have been built to make sure these birds to have better nesting conditions. They tend to stay on their turf islands, where they are safe from nest thieves. After hatching the chicks practice swimming in the middle of water lilies.

The Red-Throated Diver can dive for up to one minute at a time. It fishes by diving in the clear waters of the National Park's larger lakes. It feeds on small fish such as the Roach (Rutilus rutilus) and the Perch (Perca fluviatilis). It cackles loudly as it flies across lakes.

The Red-Throated Diver is a gaviforme. Its close relative the Black-throated Diver (Gavia arctica) also nests at Repovesi. The Red-Throated Diver is smaller than its relative, about 53 to 69 cm long with a wingspan of 106 to 116 cm. Its distinguishing features are a dark brown back, grey head and a rust-red spot on its head, which can seem black from farther away. During winter they and their young are much lighter coloured than in summer.

While in flight the Red-Throated Diver's head stretches out in front of it and its neck hangs slightly lower. Its bearing is not very graceful. In October - December they fly south in small flocks. In spring around 1,000 mating pairs return to Finland.

In recent years the number of Red-Throated Divers has fallen both in Finland and in the rest of Europe. Over ten mating pairs nest in Repovesi National Park. In Finland drainage resulting in the fall of water level in small lakes and ponds has caused problems for the Red-Throated Diver. The shores of ponds have become too steep for them. Hikers should remember that as a wild bird the Red-Throated Diver suffers from the disturbances caused by man. These like other birds should given their peace and observed from a distance.

Fire as a tool for nature management

Fires are a part of the natural life cycle of boreal forests. Traces of old forest fires, including charred old stumps, can also be found in many places in Repovesi. A large part of Repovesi forests were used for commercial forestry over the past decades, resulting in a homogeneous forest structure. Controlled burning for restoration purposes has been an effective technique for restoring old commercial forestry areas to a more natural state in Repovesi.

The fire has many different types of impacts on forest structure and species: some of the trees die immediately while some are damaged and die slowly over the years, and others sustain little or no damage and continue to grow. Decaying wood in varying stages of decomposition develops in a burnt forest, and a new generation of trees comes up beside those that survived the fire. For some species, fire is an essential part of the life cycle. The black fire beetle (Melanophila acuminata) and the false darkling beetle (Phryganophilus ruficollis) can sense a burnt forest from afar and arrive promptly on the scene. Woodpeckers follow hard on the heels of insects. Spring pasque flowers proliferate as a result of controlled burning. Tree fungi species also diversify over the years.

Repovesi is an area where controlled burning has been carried out regularly for nature management purposes. So far, approximately 60 hectares of forest have been burnt in six different areas. Some of these sites are very close to hiking trails.

Controlled burning is only carried out when a forest fire warning is in effect to make sure that the ground is dry enough. The rescue services are always informed of the burning, and it is subject to a permit. When carefully planned and prepared and when the weather conditions are right, forest burning is quite safe.

The Emblem of Repovesi National Park is Red Fox