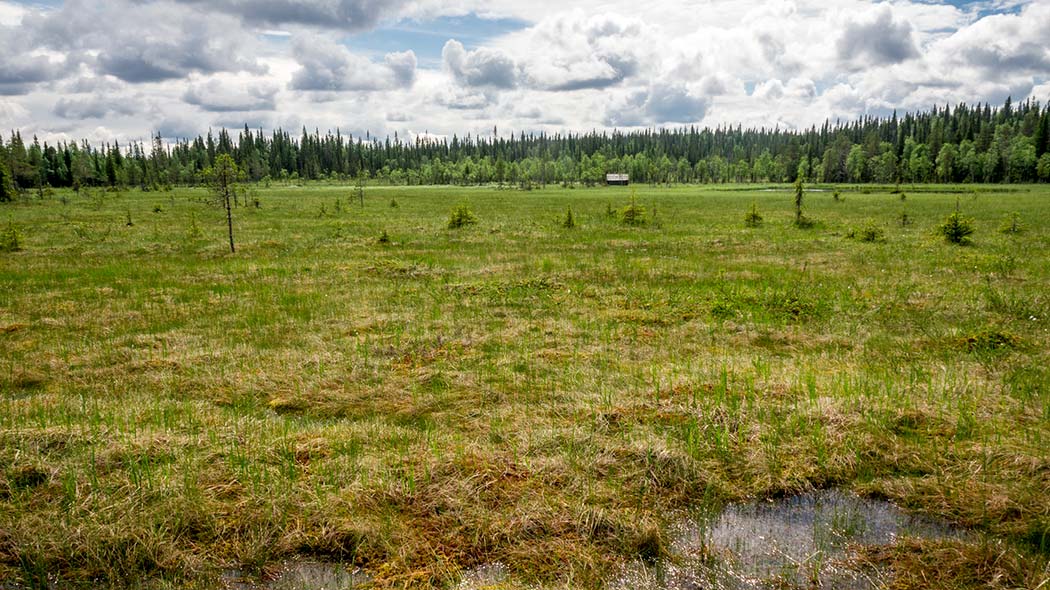 History of Land Use

In the emblem of Syöte National Park is pictured a meadow sauna, and the smoke in the background rises from a slash-and-burn field. The picture is related to the rich land use traditions of the area. In 1800s the spruce forest hills of Syöte were cultivated by clearing and burning-over woodland, and later meadow saunas were built near the fen meadows for haymakers to stay in. The exhibition in the Visitor Centre displays the history and traditions of the area. The details of the recently built new constructions in the National Park resemble the old building tradition of Syöte area.

The people from the region of Savo arrived in the wilderness in Pudasjärvi and Taivalkoski around the end of 1500s, bringing with them the tradition of slash-and-burn agriculture. In the northern parts of Pudasjärvi and Taivalkoski, and southern parts of Posio, which all are now inside the National Park, as much as possible of the suitable land on the forested hills was cleared and burned-over for agriculture, with or without permission. This method was still in use in the mid 1800s. Many names of the places in the area end with the word "aho", which means "glade".

In the crofter period, farming was not that much developed. It was only after the restrictions set by Metsähallitus on slash-and-burn agriculture, that the crofters began to keep cattle. The fields of the tenant farms were small, sometimes less than 5 000 sq. m. They grew cereal and potatoes. Hay for the winter had to be collected from the many natural meadows on the crown land. The large mires, which were in their natural state, were not very productive, so hay could not be cut every year. Harvesting hay from these natural meadows ended in the 1960s.

Moist meadows in hollows, and flood meadows were better for collecting hay than the fen meadows, as the floods would stop moss and trees from growing. Therefore dams were built in the brooks going through meadows, so that the water would rise while the hay was growing. The dam was opened and the meadow dried in the end of July, before cutting the hay.

Also flood meadows near lake shores were nutrient and grew well. By lowering the water level it was possible to get more of this useful land at the lakeshores. A good example of that can be found at Lake Vaara-Salminen, near Salmitunturi Fell.

On the fen meadow at Lake Latolampi, which used to belong to Rytivaara Crown Forest Croft, a dam and a barn have been built to the same places where they were in the old times. Guided tours are organised to the farm and this meadow by local nature tourism enterprises. More information from Syöte Visitor Centre.

The meadow culture left behind many traditional agricultural landscapes of high value in the area. Also nationally valuable is Peuronoja water meadow near the boundary of the Park, between Jaaskamonvaara and Isovaara Hills. Liiveri meadow at Latva-Korte-Kärppävaara area has been classified as regionally valuable. The fen meadows at Latvalamminsuo mire and Lake Ahmalampi, between Selkävaara and Ahmavaara Hills, are locally valuable, as well as the meadow on Rytivaara Crown Tenant Farm grounds, where nowadays hay is cut every year, to maintain this traditional landscape in the National Park.

Forest works were an important addition to the crofters and farmers means of earning their living. When hay making finished, forest works started, and sometimes if the logging sites were far away, loggers stayed there the whole winter.

The capacity of sawmills increased in the end of 1800s, when the efficient steam sawmills of the Ostrobothnian coast started working. River Iijoki was very useful for floating the logs. Only the biggest logs were felled, and pulled by horses to the waterways. The numerous brooks of Syöte made it possible to float the logs to River Iijoki. Dams were built in the brooks, to get the melting snow to rise the water levels in the brooks. Flumes were built in the narrow places. Remains of logger's cabins, floating dams and flumes can still be found in the park area.

There were still large logging sites around Syöte and Sarakylä in the 1940s and 50s, when war reparations had to be paid to the former Soviet Union. However, the last large loggings in the area which now is the National Park were in the beginning of the 1900s, around Jaaskamonvaara Hill. Old growth-forests in the area indicate that large-scale forestry did not reach the high altitude forests, because transporting the logs would have been difficult and expensive.

Hunting has traditions dating back thousands of years at Syöte. For the local people it was still important means of subsistence is the 1700s and 1800s, and for some poorer people still in the 1900s. Illegal traps were common in the state-owned forests. Many names of the places in Syöte are related to hunting, such as Hirvikumpu, Hirvihete, Peuransuo, Ahmasuo, Oravivaara, Hanhilampi (in Finnish: Hirvi = Moose, Peura = Deer, Ahma = Wolverine, Orava = Squirrel, Hanhi = Goose). Pyhitysvaara Hill, the highest hill in the National Park (at 422 metres above the sea level), is said to be the place where traditionally offerings were made to secure good luck in hunting.

The new inhabitants in Syöte area learned the skills needed in reindeer herding from the Forest Sámi people in the 1700s. Slash-and-burn agriculture and reindeer herding were useful to each other: In the winter the reindeers ate the Beard Lichen (Usnea barbata) and Horsetail Lichen (Alectoria) on spruces that were felled and drying to be burnt. When slash-and-burn agriculture became more common, were new places needed for the clearings further in the forest, and therefore reindeers were necessary in transporting hay and crops over the long distances and difficult terrain. This became a useful combination and means of livelihood.
Around the end of the 1800s, reindeer meat trade became economically more important to reindeer herders, and the former versatile uses of the reindeer faded. At the same time were established the reindeer owner's associations, which still work today. More information of reindeer herding and Reindeer Herders' Association (paliskunnat.fi).

Marks of the human activities from the prehistoric times can be found in the Park. There are remains of pits, which were used to trap game and to prepare or preserve food. There are also several places at the scree stone fields, where heaps of stones have been collected in the summer to be used for building fireplaces in the ancient dwellings in the winter.