Savukoski's bedrock was completely formed over 2 billion years ago. Quartzite, which is the main type of rock found in Kivitunturi, was formed 2,400 million years ago. Quartzite was originally sand deposited on the shore of an ancient ocean from a massive continental landmass in the east. At that time, the entire area that is now Savukoski was volcanically active and shifted along with the Fennoscandian plate at the latitude where southern Europe is today. The same types of quartzite areas can be found all over Lapland, in a zone that stretches from Salla to Enontekiö. Because quartzite is highly resistant to wear, it stands out in the landscape as fells or other peaks once the softer rock is worn away. 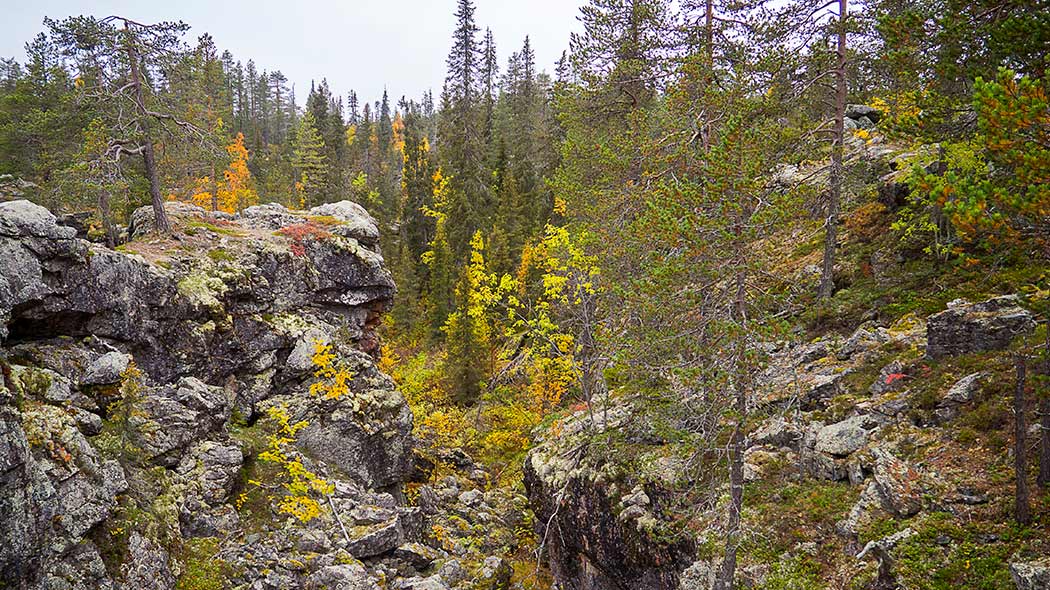 Weaker parts of the otherwise durable quartzite have fractured over time as a result of movements in the Earth's crust. At Kivitunturi, signs of these upheavals can be seen in ravines such as Pirunkuru and Kivikuru and colourful patterns in the rock itself, which were formed when molten rock filled fractures and cooled into what is known as hypabyssal rock. The most easily recognisable hypabyssal rock is snow white quartz, which can be seen along the trail in several places. 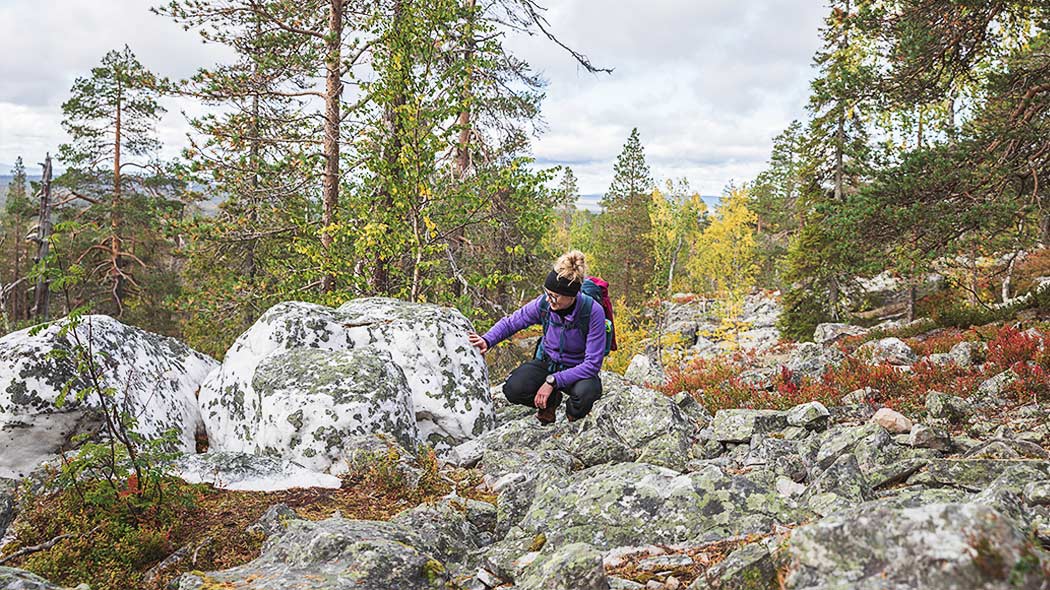 In addition to quartzite, typical terrain features found in the landscape around Kivitunturi were formed by meltwater from the retreating continental ice sheet approximately 10,000 years ago. The soil at Kivitunturi was formed during this time.

At the Kettukumpu scenic overlook, you can easily step 9,000 years back in time, when a large part of the area was under a glacial lake at Salla.
The various formations are a record of the different phases of history. For example, the unusually flat sand mound just before Äitipetäjänlampi Pond is a remnant of an ancient estuary, which existed between the retreating ice sheet and the fell. The flatness of the sand mound stands out against the otherwise rugged terrain.

The nature surrounding Kivitunturi is very diverse, and several different biotopes and species can be seen along the trail.

The forests are dominated by pine and can be quite old in some places, with the oldest pines being several hundred years old. The most common tree species are spruce, birch and pine. Spruce is the newest of these, first arriving in the region some 4,000 years ago. As the spruce began to take over wetter low areas, pine retreated to drier areas with sandy soil and bedrock areas. 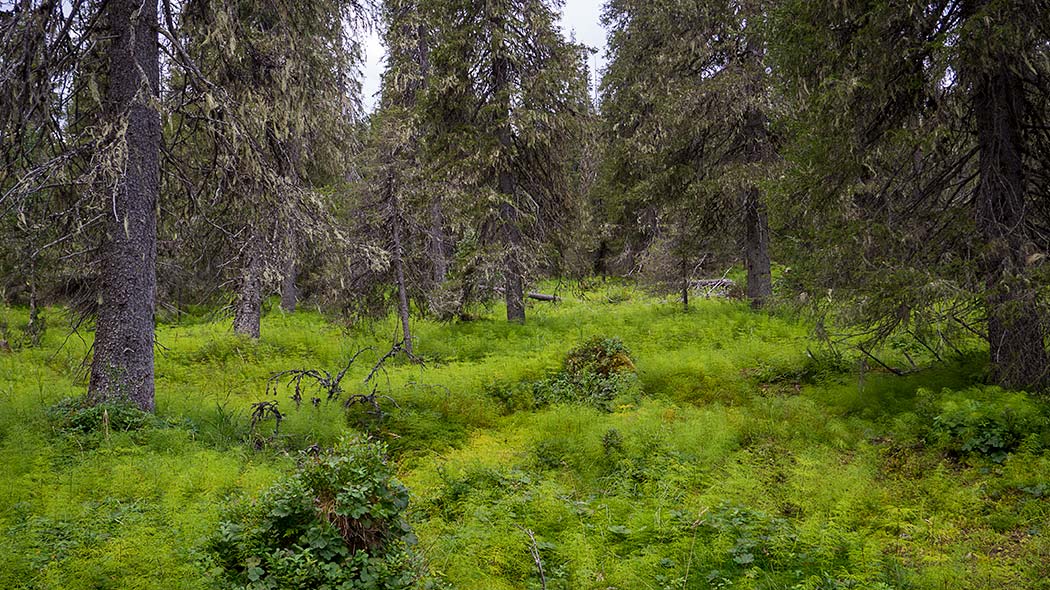 There are also several lush creek hollows along the trail. The hollows and ravines in the area have herbaceous plants typically found in creek hollows, such as the lady fern, the rare Alpine blue-sow-thistle and Arctic sweet coltsfoot. Berries growing in the area include cloudberry and blueberry as well as bog bilberry and poisonous Paris quadrifolia. Commonly found flowers in the area include the Arctic starflower, bunchberry and wood cranesbill.
Even though the Kivitunturi trails do not lead to any real mire areas, there are some places where you can find numerous mire plants, such as marsh Labrador tea and bog rosemary. 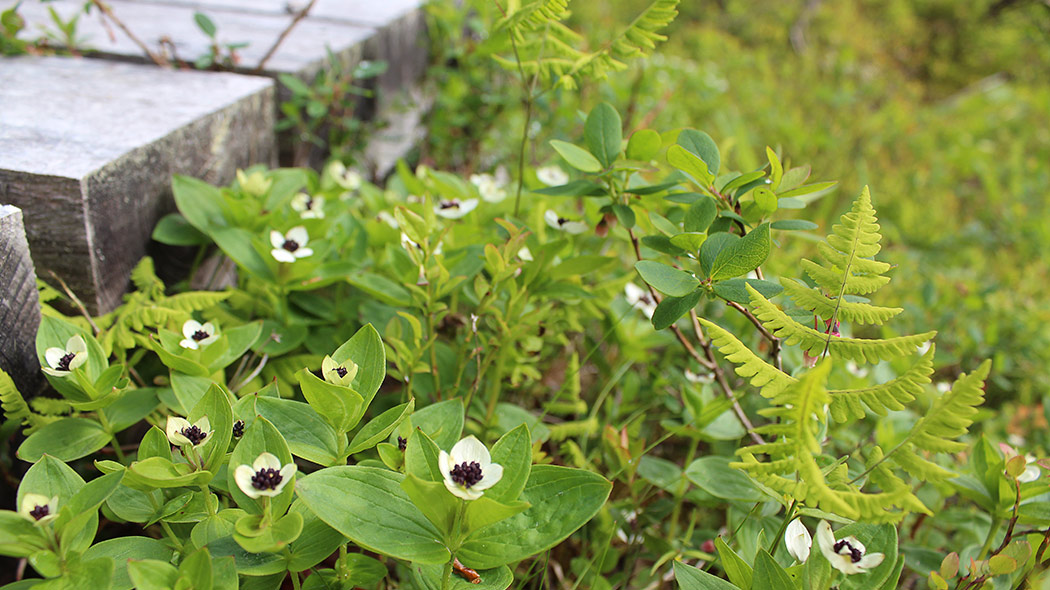 Rock Fields on the Fell Summits

The higher up the fell you go, the lower the vegetation grows, but there are no truly 'bald' fells at Kivitunturi. The frost weathering that took place over thousands of years has resulted in the formation of rock fields on the summit and slopes of the fell.

These rocks are covered with crustose lichen, fungi and primitive algae organisms. As crustose lichen grows slowly, a coin-sized specimen might be roughly 100 years in age.
In the cool climate of the far north, the alternating freezing and thawing of moist soil, frost heave, pushes stones to the surface, thus creating visible patterns on the surface of the fell. 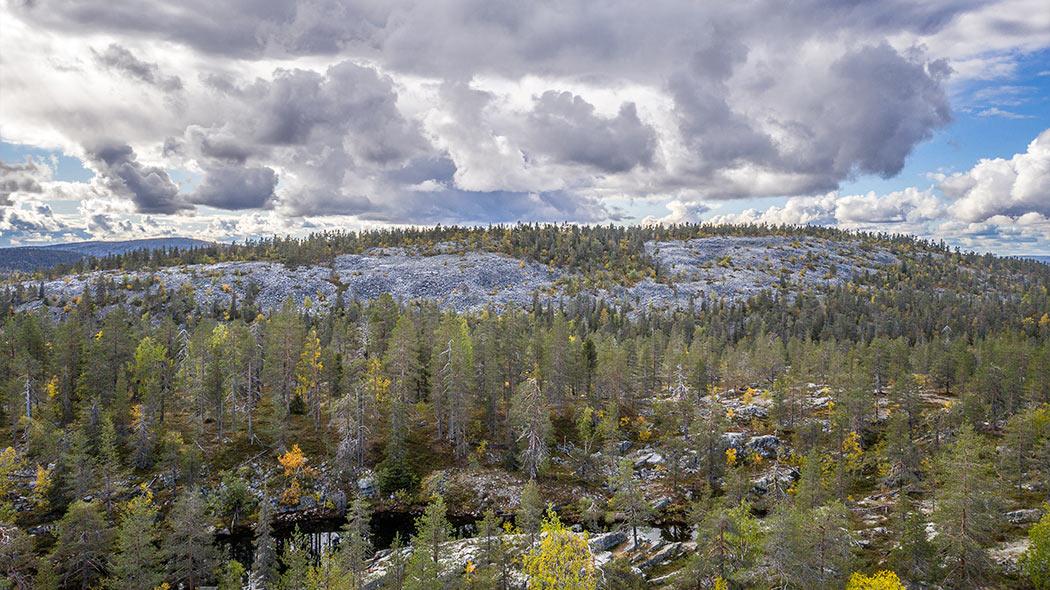