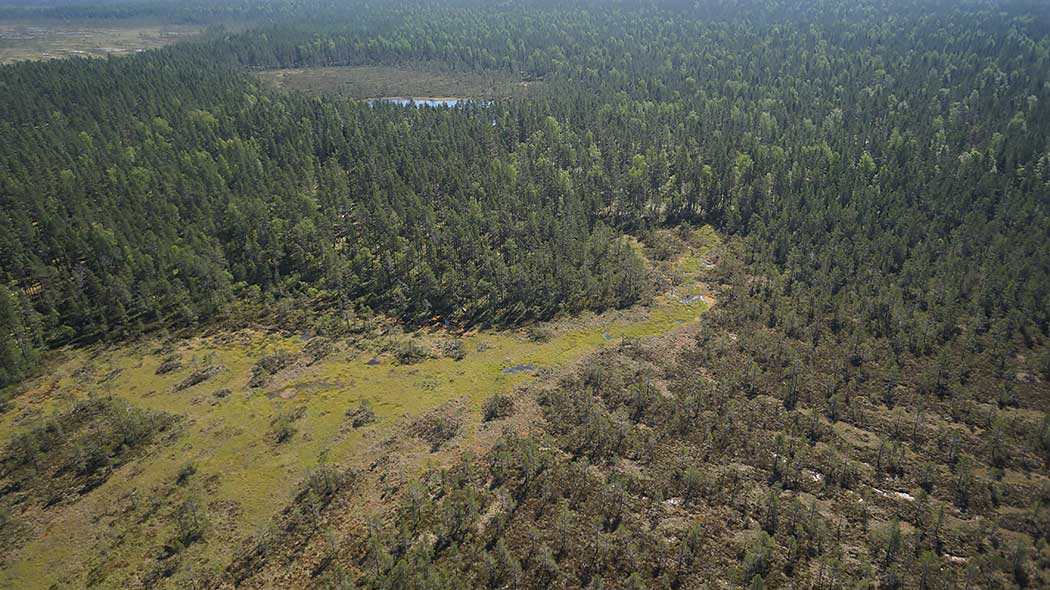 In Lauhanvuori National Park, Lauhanvuori mountain is surrounded by mires and covered by pine forests. Its slopes are decorated by large boulders, ancient shore formations and clear springs. 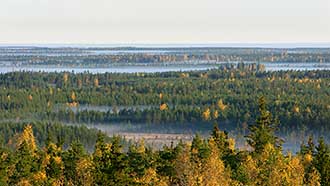 After the ice age, the mountain top was a lonely island in the middle of open seas. Now the UNESCO Global GeoPark status is being sought for the area. Read more > 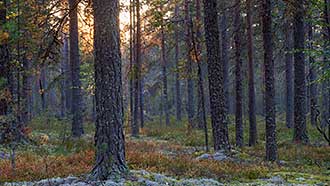 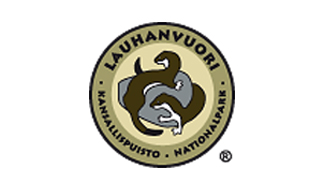 The regional emblem of the Lauhanvuori National Park is the fun-loving stoat (Mustela erminea). A fast hunter, it has quick paws and speedily disappears out of sight. Read more > 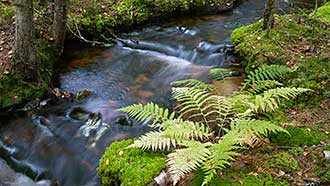 The banks of the of the streams are decorated with green leaves. Crystal clear groundwater forms springs. Trout splash about in the clear streams. Read more > 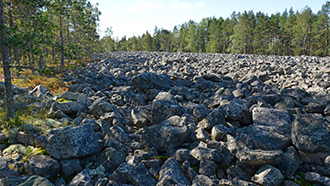 The soil of Lauhanvuori is made of sandstone. It is a remnant of the ancient times when Finland was located on the Equator.
Read more > 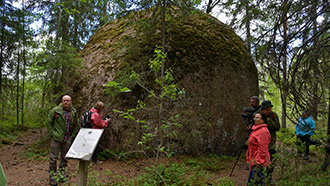 Tors are gentle-shaped stone formations around which the cover rock has eroded away. There are many tors at the foot of Lauhanvuori and Aumakivi is the best-known of them. Read more > 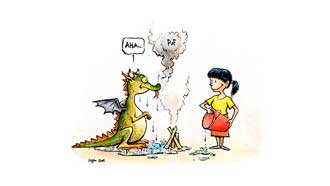 The dry, lichen-covered esker ridges are extremely susceptible to fire in the dry season! Always check to see if there is an ongoing warning before making fire (Ilmatieteenlaitos). Open > 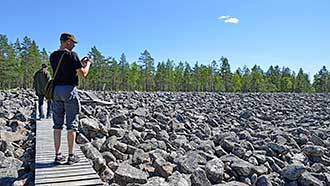 Please stay on the trails so that the surrounding environment is protected. Let’s save the nature of Lauhavuori together! Please familiarise yourself with the park’s instructions and rules. Read more > 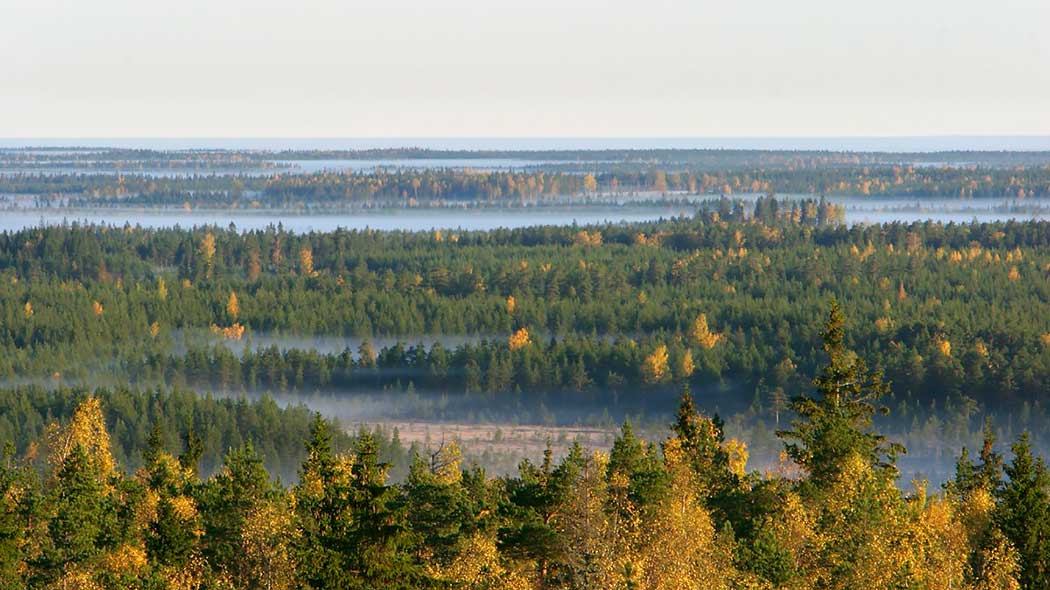 The top of Lauhanvuori Hill, at 231 metres, rises about 100 metres above the surrounding lowlands. That is why this region is sometimes called the Lapland of Western Finland. The hill top is about one square kilometre in size, and it emerged approximately 10,000 years ago when the continental glacier receded from the area. The top of the hill was originally a lone island in the middle of the vast and ancient Baltic Sea.

Waves, ice and wind shaped the slopes of the mountain rising from the water. This created shoreline terraces, erosion banks and gullies made by running water. The best-known formations are probably the barren stone deposits of the ancient shoreline. These boulder fields, which can be over a hundred metres long and dozens of metres wide, were a source of amazement in the old days. It was believed that only giants could build such stone walls.

The significant geological formations and diverse mires in the area are an important feature in the region’s application to become part of UNESCO’s international Geopark network. Unesco Global Geopark (unesco.org). 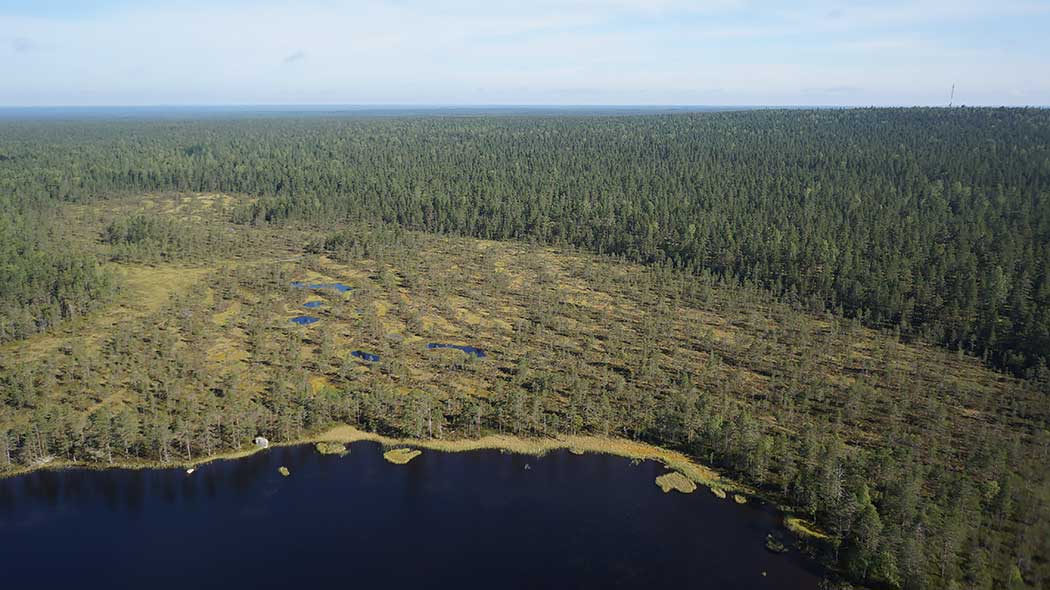 At the foot of the hill, barren bogs formed in the depressions on mineral soils. With just a thin layer of turf, they give Lauhanvuori Hill its individual appearance. In the spring, the mire is full of noises made by the Western Capercaillie (Tetrao urogallus) and the Common Crane (Grus grus). The cackling of the Willow Grouse (Lagopus lagopus) can also be heard. 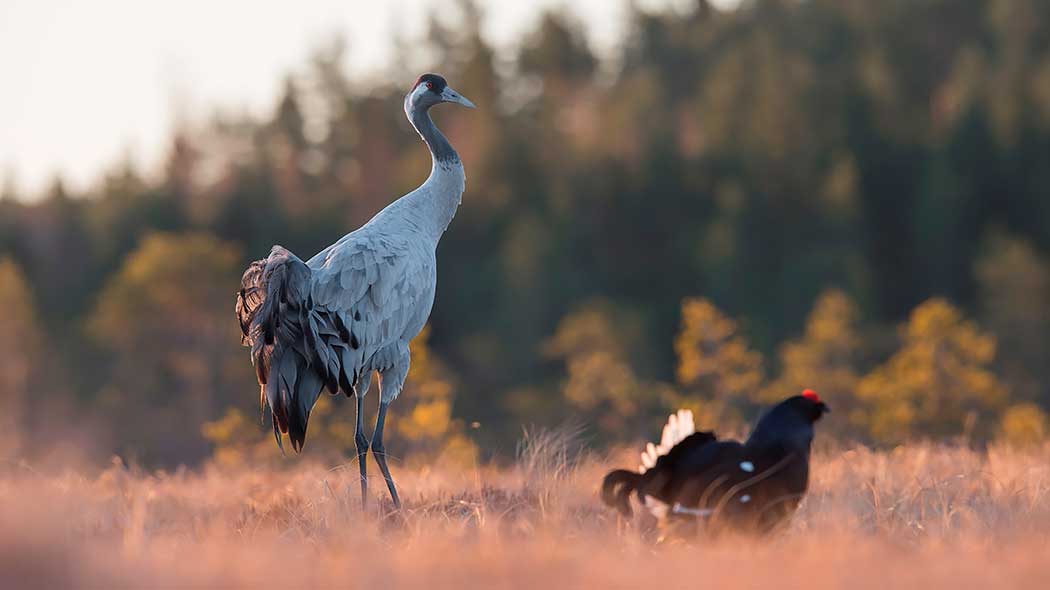 The stunted pines (Pinus sylvestris) on the barren lower slopes are covered with lichen. This is a habitat for northern species, such as the Brambling (Fringilla montifringilla), and the Bohemian Waxwing (Bombycilla garrulus) which usually spends summers in the north, but lives at Lauhanvuori also during the summer. There you can also hear the Mistle Thrush (Turdus viscivorus) singing, and in the summer nights the churring of the European Nightjar (Caprimulgus europaeus). An interesting plant is the Yellow Bird's nest (Monotropa hypopitys) , which decorates the slopes in the autumn. This non-chlorophyllous plant receives nutrients from the roots of the pines. 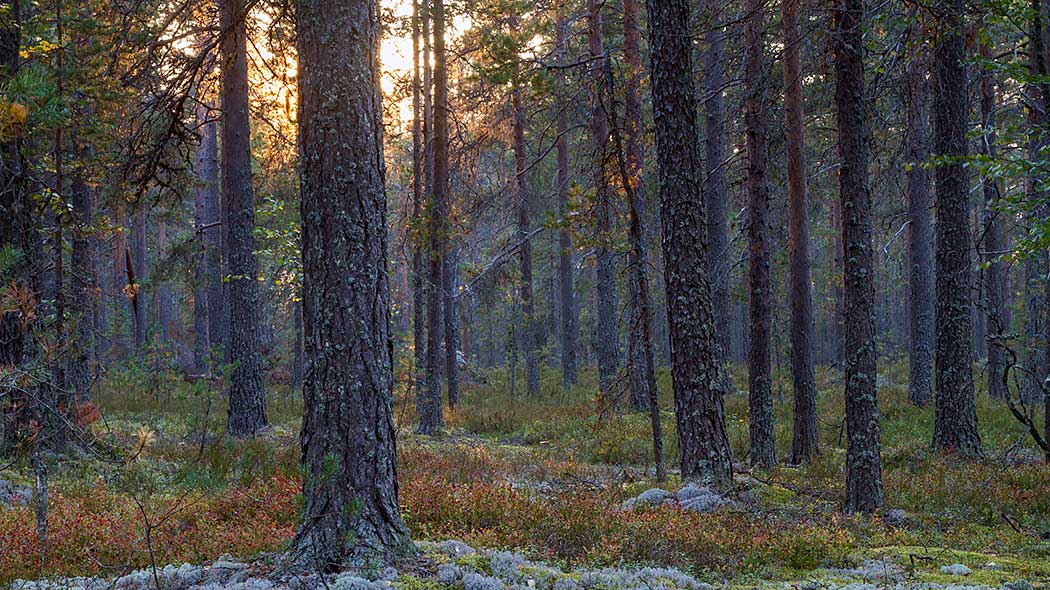 The top of Lauhanvuori Hill is dominated by deciduous trees.

The hill top remained above water and therefore retained its nutrients and loose soil after the Ice Age. This is why the hill top is fertile while the lower slopes, where the soil was washed away by water, are quite barren. The vegetation on top of the hill is more luxuriant, with plenty of deciduous trees and spruce. The Moose (Alces alces) eats the top leaves of the Aspen (Populus tremula) and the Rowan (Sorbus) saplings. In lush places grow the Wood Crane's-bill (Geranium sylvaticum), the Chickweed Wintergreen (Trientalis europaea), the Bracken Fern (Pteridium aquilinum) and the Mountain Melick (Melica nutans) .

The location of Lauhanvuori at the Suomenselkä watershed region can be seen in the vegetation; both southern and northern species are found there. 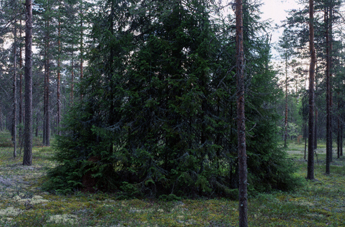 So-called family spruces are common, especially on the southern side of Lauhanvuori Hill.  In the middle there is the mother spruce, the branches of which have become rooted in the ground, forming like a family around the mother tree. These rare spruce formations can usually be seen on sunny slopes, where there is lots of space for the spruce to grow a family around itself.

Quick moving stoats live on the slopes of Lauhavuori and a lucky hiker can spot one on the trails or in the camping site’s wood storage. Stoats mainly hunt small rodents, but will also catch small birds, insects, molluscs and frogs for food. 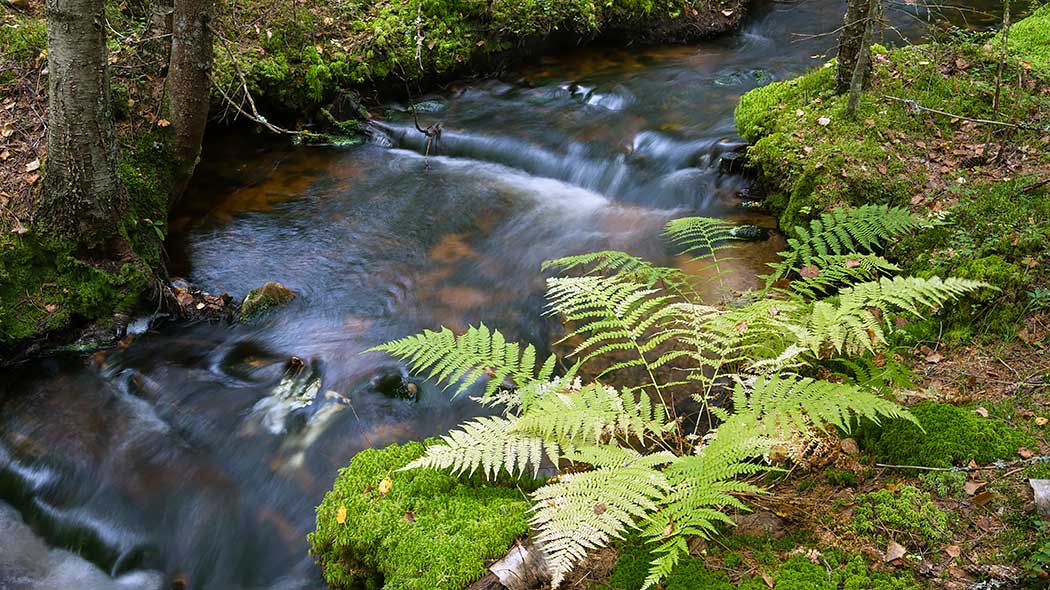 The Lauhanvuori Hill, being 100 metres higher than its surroundings, stops the rain fronts, which is why it rains at Lauhanvuori more than in the surrounding areas. Rain water is quickly absorbed into the layers of ancient sandstone. The rainwater goes deep down into the groundwater. Lauhanvuori forms plenty of groundwater, and therefore the water resources of the area are excellent.

On the lower hillsides the groundwater come close to the surface, and shows up as beautiful springs and brooks. Peräkorpi Spring is located along the trail from the Kivijata boulder field to Lake Spitaalijärvi. The surroundings of the springs and brooks are like oases in the middle of the dry rugged environment. The vegetation includes several rare spring and mire species. In the clean spring-fed brooks lives the Brown Trout (Salmo trutta fario), which hides in the shadows of the bank when you walk by on the duckboards. 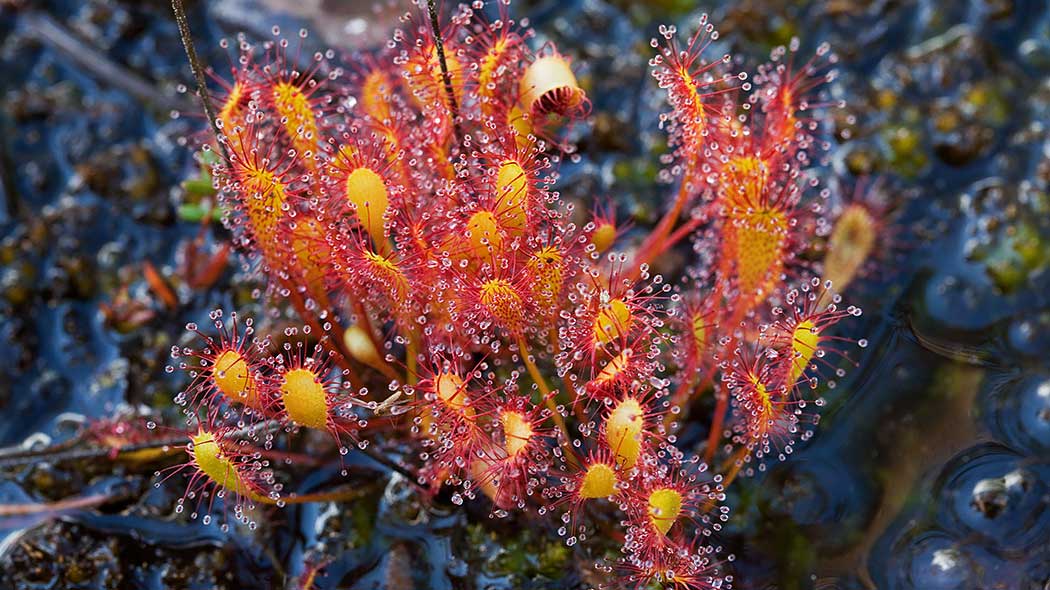 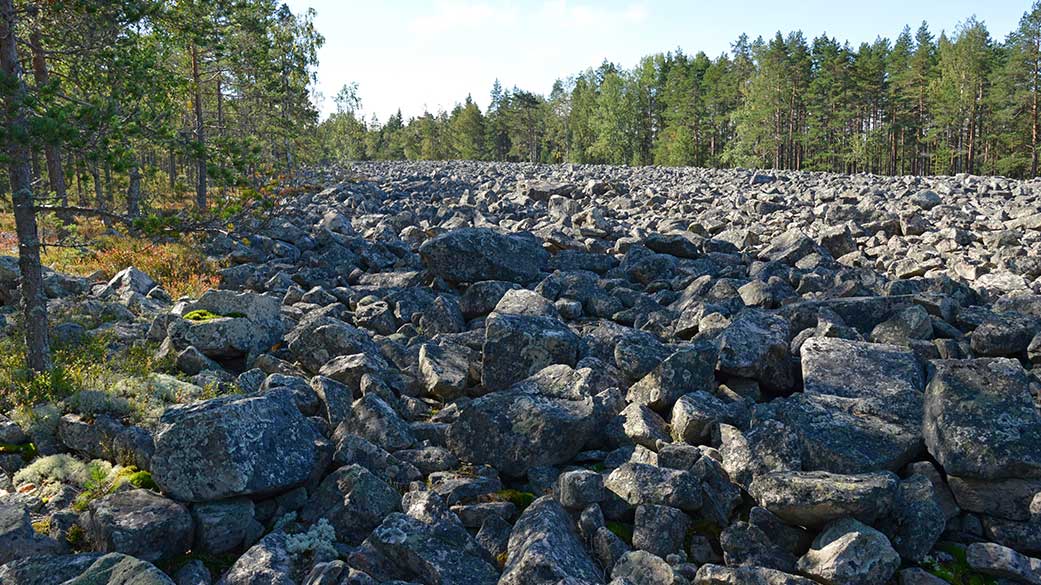 Tors are stone formations created as a result of rock weathering and they can be found all over the world. The Lauhanvuori tors were formed from granite bedrock between 70 and 20 million years ago. The best-known tor is the Aumakivi, which is located near the southwest edge of the park. The weathering process is particularly strong in a hot and humid climate. Such a climate prevailed in Finland several tens of millions of years ago. The granite of the Aumakivi is 1,900 million years old.