Instructions and Rules along Karhunkierros Trail 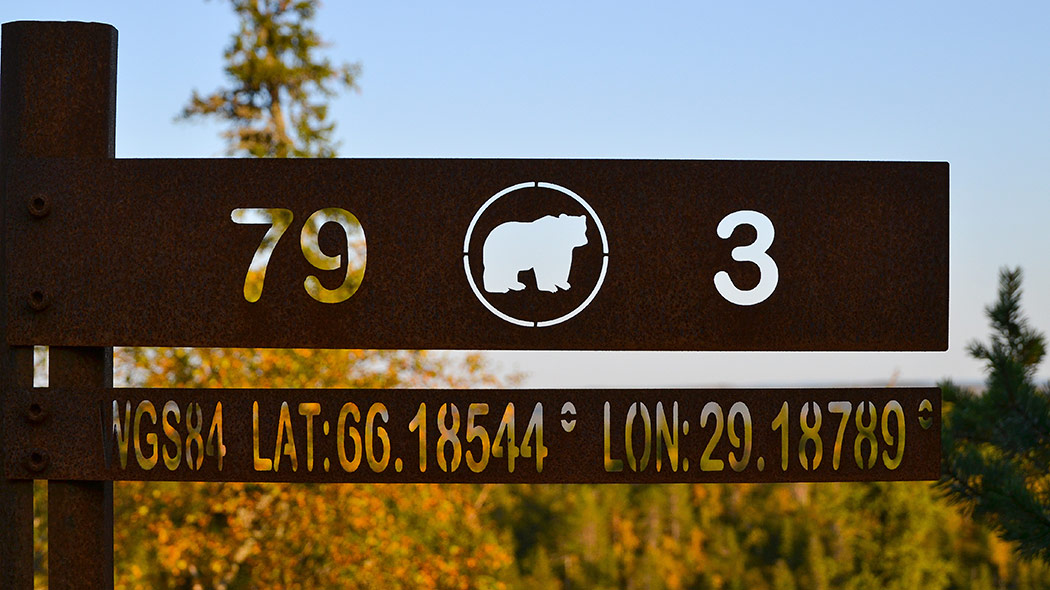 The winters in Kuusamo are harsh because of the low temperatures and heavy snow cover. We recommend winter hiking only for experienced hikers. It is also good to keep in mind that weather conditions can change very quickly compared to southern Finland. The northern winter lasts an average of 6 months and April and sometimes even May is calculated as a winter month due to the thick snow cover and freezing temperatures.

Snow cover (ilmatieteenlaitos.fi) will arise usually around mid-October, and the snow accumulates during the winter to an average of 85 cm. The lowest temperatures in the area have been measured at the Oulanka National park, Kiutaköngäs rapid, sinking as low as -46 ° C. Spring will usually arrive in Kuusamo during the last week of April as the days get longer, but it is not unusual for the trails to still be covered in snow in June.

It is important to familiarize yourself with the National Park and trails beforehand and prepare for the excursion carefully. Staying on the route as well as tracking weather forecasts will help you succeed. The Rukatunturi-Oulanka 1:50 000 map is a good outdoor map that you can purchase before the hiking excursion.

Hiking during the winter months is demanding. Weather and light conditions are difficult in mid-winter, as the temperatures can drop to -40 degrees celsius, and during the polar night period from November to February daylight lasts only for a few hours. It is also advisable to prepare for rapid temperature fluctuations and keep in mind that in the Oulanka National Park it may be more than 10 degrees colder than in the Ruka-Kuusamo area. Keep in mind that the wind increases the bitterness of the frost considerably. Energy demand is also higher at freezing temperatures, which should be taken into account when packing.

We recommend checking the amount of daylight during the days of your planned hike from the finnish meteorological institute (fmi.fi). The shortest day of the year is on winter solstice around the 21st December. On this day begins the astronomical winter, ending in spring on the vernal equinox about 90 days later. From the winter solstice day onward, the days become about five minutes longer a week. Towards the end of the astronomical winter, the day's lengthening will accelerate and the change will be at its peak during the vernal equinox. During the winter solstice in Kuusamo the day is 2 hours and 49 minutes long. The sun rises at 10:37 and sets at 13:26.

During winter, it is worth considering that the hiking speed is much lower than during the summer, average 1.5 km per hour (compared to summer 3-4 km/h). Walking in deep snow, with a heavyweight backpack, hiking pace can drop to 1 km per hour due to Oulanka's varying terrain.

Also, the heating of the open wilderness huts can take several hours, which should be considered when planning a trip. At night, the temperature inside the huts can drop to freezing temperatures if the fire is not maintained overnight.

Please note that the river ice - especially on the Oulanka river - may be fragile due to the strong currents during winter. The snow cover may hide the fragile points of the ice. The ice rinks on the side of the river shouldn't be stood or walked on under any circumstances.

The main equipment on all the winter hikes, even shorter day trips, should include a flashlight, a knife, matches, a map and a compass, in addition to snacks and drinks. More information about equipment and hiking can be found on camping books and on the Hiking in Finland page.

On overnight hikes, make sure that you have a good winter sleeping bag and a very well insulating sleeping mat. It is advisable to keep track of weather reports before going to the hike and packing some extra clothes for sudden temperature changes. For less frequently walked paths, we recommend taking snowshoes as the paths do not have any winter maintenance.

On cold days, mobile phone batteries may die out quickly. The battery will last longer, when the mobile phone is stored in a plastic bag close to the body. Certain phone models do not operate in the cold due to contact disturbances, so it is advised to leave a travel plan to someone you know. We also recommend bringing a backup power supply, a spare battery, or an old phone with a durable battery.