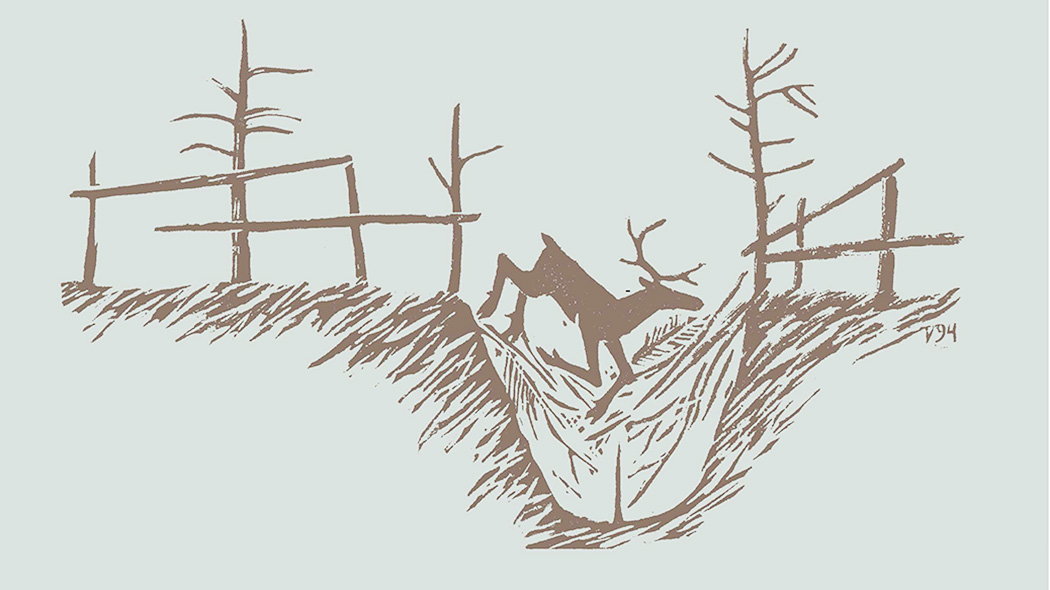 Unlike us, our ancestors were not able to buy meat directly from the local shop. They had to catch the game that ran wild. It was not easy to hunt reindeer or other game and therefore a large variety of reindeer hunting methods were developed over the course of the centuries.

As far as we know, one of the earliest hunting methods was pit hunting. The hunting pits were dug in the dense sandy soil. The walls of the pit were often supported by wooden structures. Sometimes the pit was also covered with branches and bark and disguised by moss and lichen with a sharp stone or stake placed at the bottom of the pit. The prehistoric remains of the hunting pits are still visible as slight depressions in the terrain.

A complete system of hunting pits has been found in the Jyppyrä area; a total of 107 remains of hunting pits. It has been concluded that this system was used when hunting in groups at the turn of autumn and winter. A large number of hunters would participate. They may even have caught thousands of kilos of reindeer meat after a successful hunting period.

Hunting with the Help of Fences

At the spot where the guiding fences drew closer to each other, the rows of stakes changed into wooden fences. The fence structure's wedge-like point continued as a track, at the end of which were a few steep steps. Finally, there was a large fenced pit at the end of the structure.

Hunting with the help of fences took place when the weather was good for skiing at the turn of winter and spring. The beaters spotted a herd of reindeer on the fells, chased them between the rows of stakes and finally into the large pit. According to legend, a man called Päiviö and his party, who lived in Peltovuoma, Enontekiö, in the 1600s, managed to catch 1,000 reindeer in one go with the help of such fences.

From Spear-shaped Pole to Deer Gun

Among the first known small arms were spear-shaped poles and hand bows. The reindeer hunters who skied used a spear-shaped pole and a hand bow as ski poles. Both of them had a ring on them to facilitate skiing. It is said that the spear-shaped pole that was used in Enontekiö was 140 cm long. The string of the hand bow that functioned as the other ski pole was only drawn during the hunting event.

The first actual deer guns came into use in the 1600s. Hunters were able to fire precise shots from up to a distance of 70 metres with the deer gun.