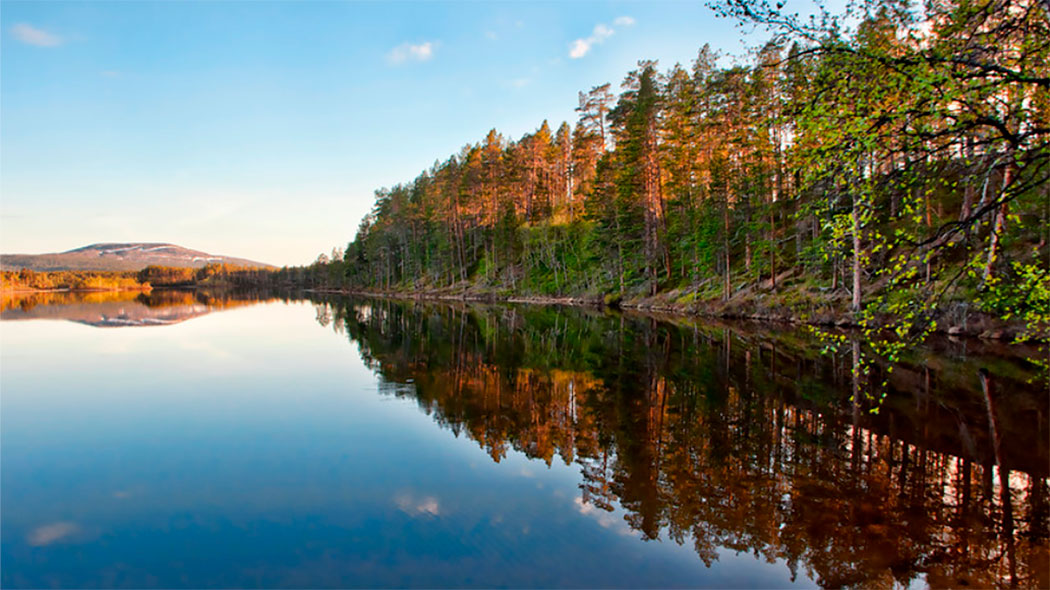 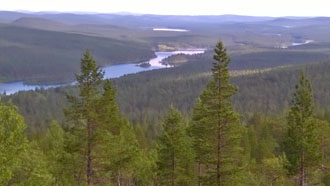 Climb a fell in Finland's largest national park. You will enjoy a view stretching over tens of kilometres!
Read more > 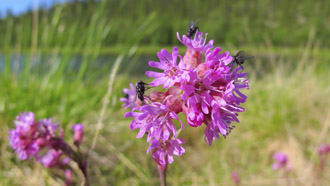 Extensive tracts of wilderness are home to many species. Visitors can look forward to discovering unexpected plants. On cross-country hikes, you can spot the tracks of large carnivores. Read more > 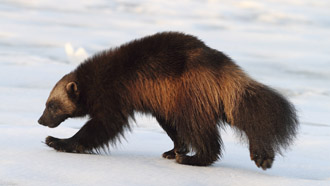 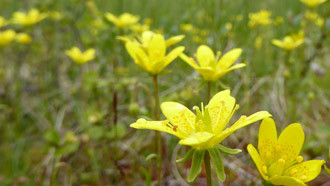 The lushest vegetation in the national park is found in riparian flood zones, where running water brings nutrients for plants to feed on. Read more > 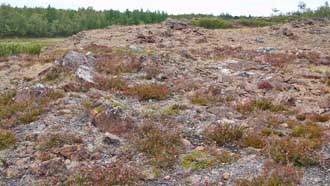 These formations with their unusual colours can be spotted from far away. We will be happy to hear about your observations of serpentinite rocks at the visitor centres. Read more > 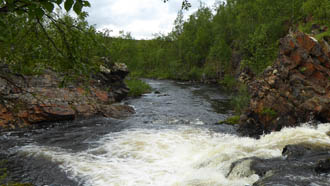 The Lemmenjoki National Park is criss-crossed by several rivers, whose sources are also in the park. Much of the water flows into the Arctic Ocean. Read more > 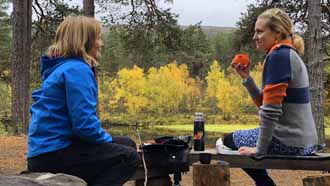 National parks are conservation areas. Let's work together to care for the environment of Lemmenjoki.
Read more > 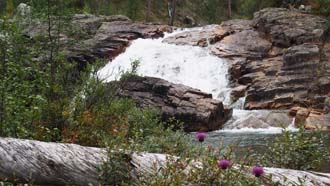 In Ravadasköngäs, visitors must stay on the signposted trails. Let’s preserve this wonderful sight for future generations to enjoy!
Read more > 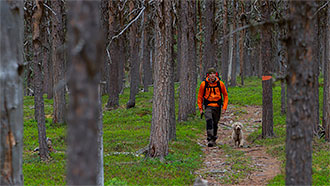 Please remember the leave no trace principle and keep your pets on leash.
Read more >

Although the varying surface contours of the highest fells in the Lemmenjoki National Park rise to elevations over 500 metres above sea level, the park is dominated by a relatively flat landscape of aapa mires, particularly in the southern section of the park. One of the most beautiful features of the national park is the over 70 kilometre-long Lemmenjoki River, framed by the Maarestatunturi and Viipustunturi fells. Climbing these fells is well worth the effort, because you can see for tens of kilometres from the summit on a clear day. 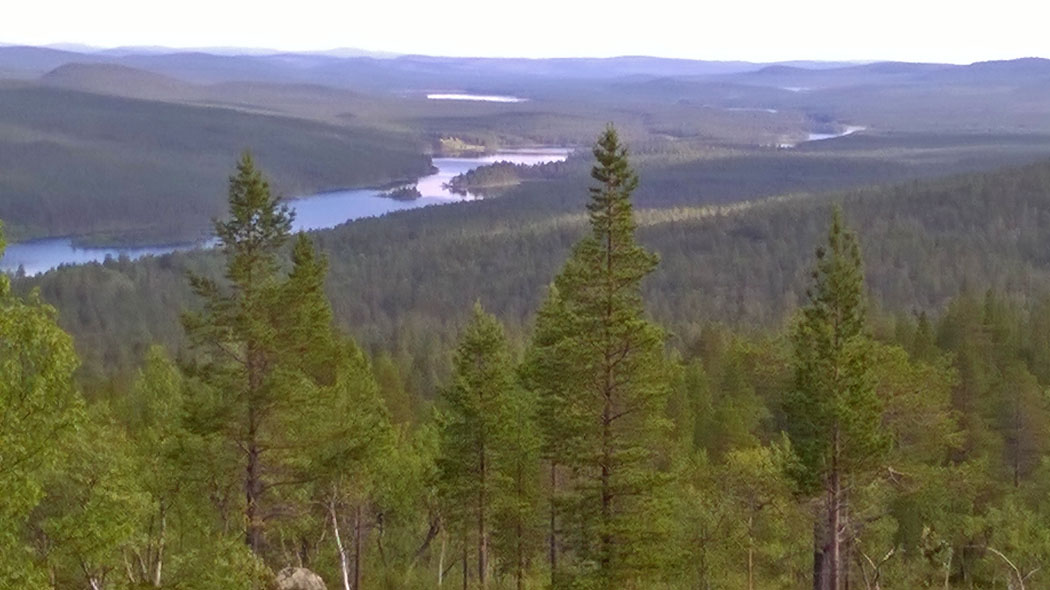 The slopes of the Lemmenjokilaakso river valley are covered by a green blanket of old-growth pine, the likes of which can scarcely be found anywhere else in Finland. At higher elevations, the pine stands give way to fell birch and then the bare summit. Despite their barren appearance, there is plenty of life to be found above the treeline. You might encounter a rare fell bird, the ptarmigan.

The landscape of the Lemmenjoki National Park is also known for its extensive aapa mires. Particularly in the southern Repokaira area, there are wide open aapa mires, which are impassable in some places. The southernmost areas of permafrost mounds (called 'palsa') in Eastern Lapland can be found in the northern section of the park. The icy interior of palsa mounds suffered a catastrophic melting and collapse in the 2000s and may disappear entirely in the near future as the climate gets warmer.

A keen observer might spot some of the national park's rare, endangered plant species such as the Arctic arnica (Arnica angustifolia), marsh saxifrage (Saxifraga hirculus), Hudson Bay sedge (Carex heleonastes), northern moonwort (Botrychium boreale) or triangle moonwort (Botrychium lanceolatum), nahanni oak fern (Gymnocarpium continentale), nodding stickseed (Hackelia deflexa) or lesser meadow-rue (Thalictrum minus ssp. elatum). These, as with all other plants, must absolutely be left in peace. Some of the rare fauna moving about in the park are the wolverine and, on occasion, the wolf. 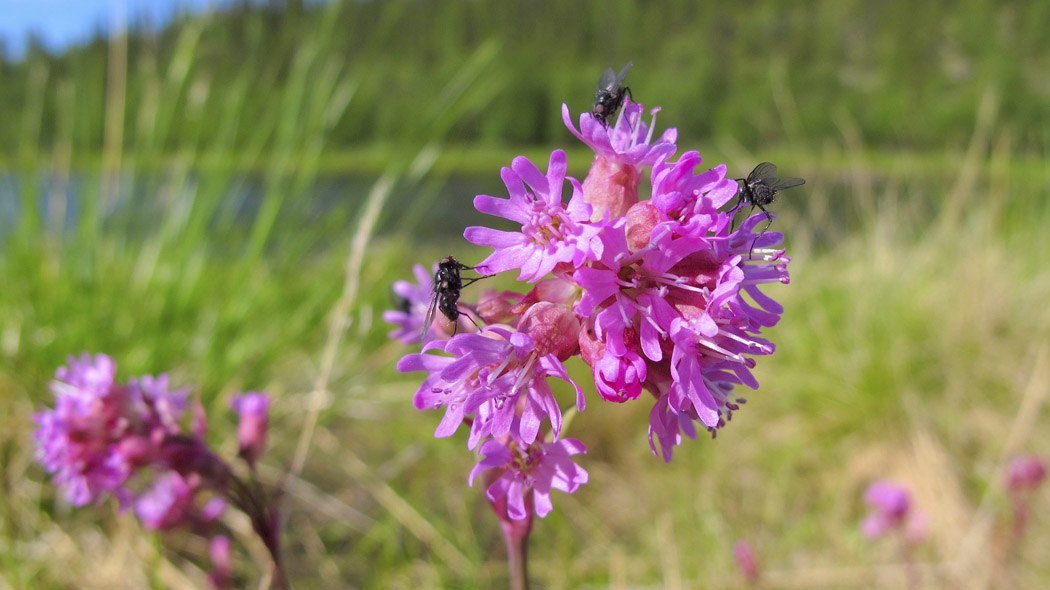 The wilderness areas of Lemmenjoki National Park are home to a wide variety of bird species. Indeed, the park is one of the most important nesting areas in all of Finland. Expansive, uninterrupted forests provide an ideal habitat for such birds as the brambling (Fringilla montifringilla), grey-headed chicakdee (Poecile cinctus) and Eurasian three-toed woodpecker (Picoides tridactylus). Common ravens (Corvus corax) and birds of prey, which prefer the wilderness setting,  nest in the riparian cliffs. The white-throated dipper (Cinclus cinclus) thrives in running water. Some of the more commonly found waterfowl are the Eurasian teal (Anas crecca) and Eurasian wigeon (Mareca penelope), while the long-tailed duck (Clangula hyemalis) is one of the rarer species.

Mires are extremely important nesting areas for northern waders, and a large percentage of the Finnish broad-billed sandpiper (Limicola falcinellus) population is found here. Southern species, such as the Eurasian wren (Troglodytes troglodytes) and wood warbler (Phylloscopus sibilatrix), reach the northern limit of their range in the more lush sections of Lemmenjoki National Park. The barren, treeless summits of the fells are the domain of the snow bunting (Plectrophenax nivalis), ptarmigan and Eurasian dotterel (Charadrius morinellus), while large numbers of common redpoll (Acanthis flammea) inhabit fell birch stands in years with a good seed crop.

Finland's largest mustelid, the wolverine is dark or black-brown in colour, with lighter fur on its sides and chest. The wolverine female can weigh roughly ten kilograms, while the male can weigh more twice that. The paws, which are large compared to the animal’s overall body size, make walking on snow easier. 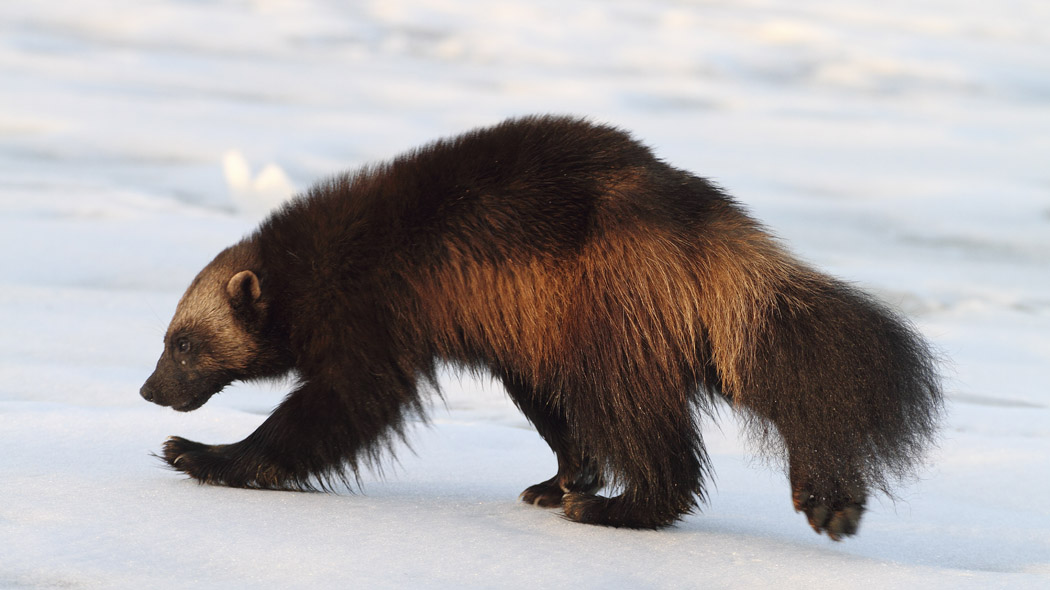 Wolverines avoid disturbance created by humans, which makes the wilderness areas of Lemmenjoki National Park an ideal habitat for them. The wolverine subsists on meat, hunting everything from voles to reindeer.

The wolverine range extends across the entire northern hemisphere and as far south as where there is still snow cover in April. In Finland, wolverines live to the north of the line between Joensuu and Vaasa. Individual wolverines have been spotted close to Helsinki.

Males, in particular, may travel long distances, sometimes up to hundreds of kilometres. The most usual sign of a wolverine living in an area is its tracks in the snow. You have to be lucky to see an actual wolverine. Females stay within smaller territories. They give birth to cubs in a nest dug under the snow in February or March, on average every second year.

Wolverines move freely across national borders, and Lemmenjoki National Park shares its wolverine population with Övre Anarjohka National Park in Norway. Depending on the year and the season, five to ten wolverines may live in the park.

The Lapland granulite belt cuts through the Lemmenjoki National Park on a north-south axis, dividing it into areas of barren and nutrient-rich rock. The parks' expansive and barren pine heaths and fell ridges are mainly found in the northern and eastern parts of the barren area. The mires, springs and bedrock in this area are also low in nutrients and few rare plants are found here.  However, lush vegetation can be found in riparian flood zones, where running water brings nutrients for plants to feed on. 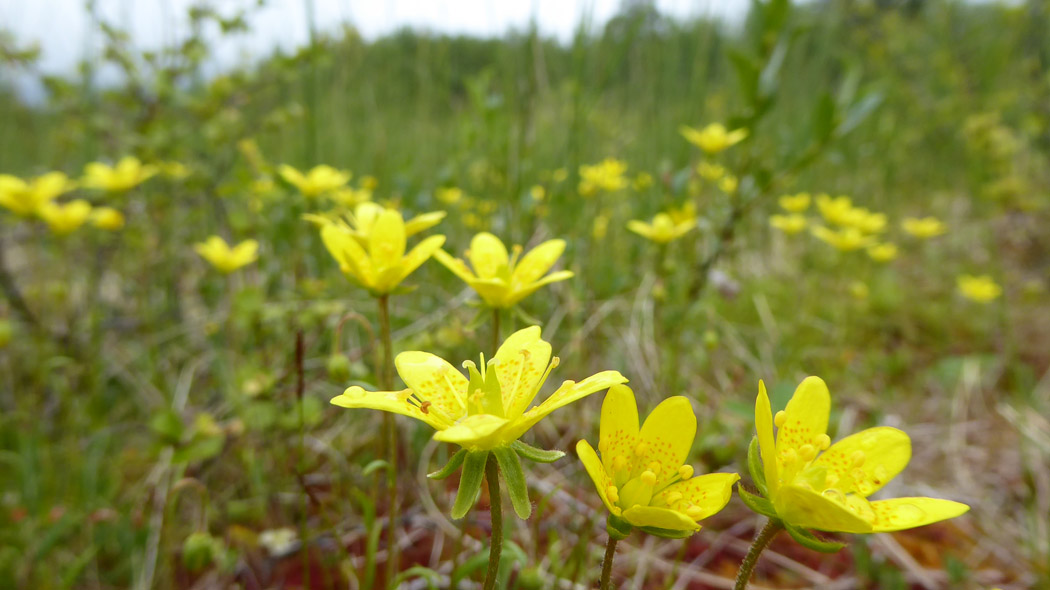 The more nutrient-rich sections of the park's southern and western parts contain extensive pine forests, which also often have spruce growing in the mix. Spruce-dominated forests occur in certain places, and these mark the northern spruce forest line. Large juniper forests are also an indicator of a different type of bedrock. Here, the extensive mires are, in many places, nutrient-rich fens, where finicky marsh saxifrage and Hudson Bay sedge thrive. Some of the bedrock takes the form of nutrient-rich rock faces, which serve as the habitat for rare plant species such as the eightpetal mountain-avens and even the Arctic arnica. Rare moss species also thrive on these rock faces and the iron-rich, rust-coloured pyrite rock found in canyons.

The park also boasts small areas of highly alkaline serpentine rock, with their attendant plant rarities. In the western section of the park the fell birch found on the Kietsimävaara fells are exceptionally lush, fresh types of fell birch,  with rare fell birch groves occurring also in wetter areas. The groundwater in the area is infused with nutrients from the bedrock, which is why there are an exceptionally large number of nutrient-rich moss springs here.

On the riverside shingles, rocks and fell heaths of the Lemmenjoki National Park, you might come across an alpine catchfly, a plant with purple flowers and sticky leaves. Depending on the location, the species can either remain a five-centimetre dwarf or grow into a plant with a height of nearly half a metre. The low-growing serpentine catchfly (Viscaria alpina var. serpentinicola) grows on ultra-alkaline serpentine rock. 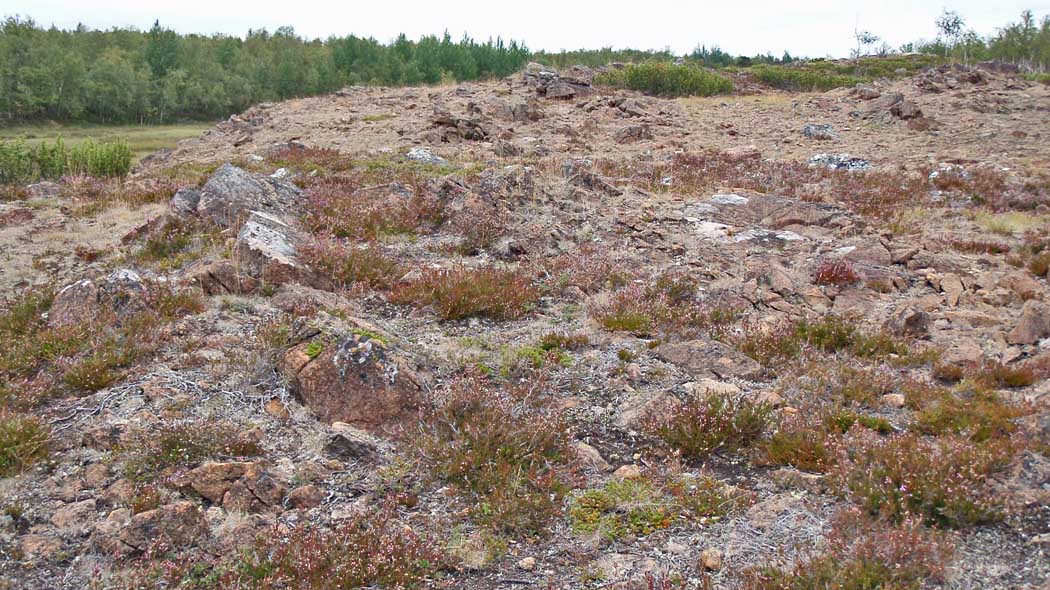 The magnesium and heavy metal content of the serpentine rocks is toxic for most plants. Plants and varieties adapted to these conditions are called serpentine species. Serpentine rocks in the remote southern and eastern sections of the park can explode in a floral display of serpentine catchfly and serpentine varieties of Alpine mouse-ear (Cerastium alpinum). In the gaps between the rocks, you may also spot the serpentine form of two-flowered sandwort (Cherleria biflora), a plant with small white flowers, and green spleenwort (Asplenium viride), a small fern. Heather (Calluna vulgaris) can also tolerate the unique conditions well.

The rare serpentine rocks, which are quite distinctive in terms of their plant life, have been named after serpentinite, a highly alkaline rock type. The serpentine rocks in the Lemmenjoki National Park stand out as dark and fragmented fields with little vegetation. However, if you happen to visit the area at the right time, you will find a sea of red and white flowers, giving the rock an even more unusual appearance.

Serpentine rocks are rare and only cover small areas and not all the locations are known. If you find an unusual looking rock, you can report your finding to Metsähallitus. All such reports are welcome.

The Lemmenjoki National Park is criss-crossed by several rivers, whose sources are also in the park. The largest of these rivers is the over 70-kilomtre long Lemmenjoki River, which is the namesake of the park, the Kietsimäjoki, Vaskojoki and Repojoki Rivers and the Ivalojoki River in the south. These are the headwaters of the Tenojoki River and Paatsjoki River, which empty into the Arctic Ocean. Running waters are indeed typical for the national park, as there are few ponds and lakes, the largest of which are less than a hectare in area. 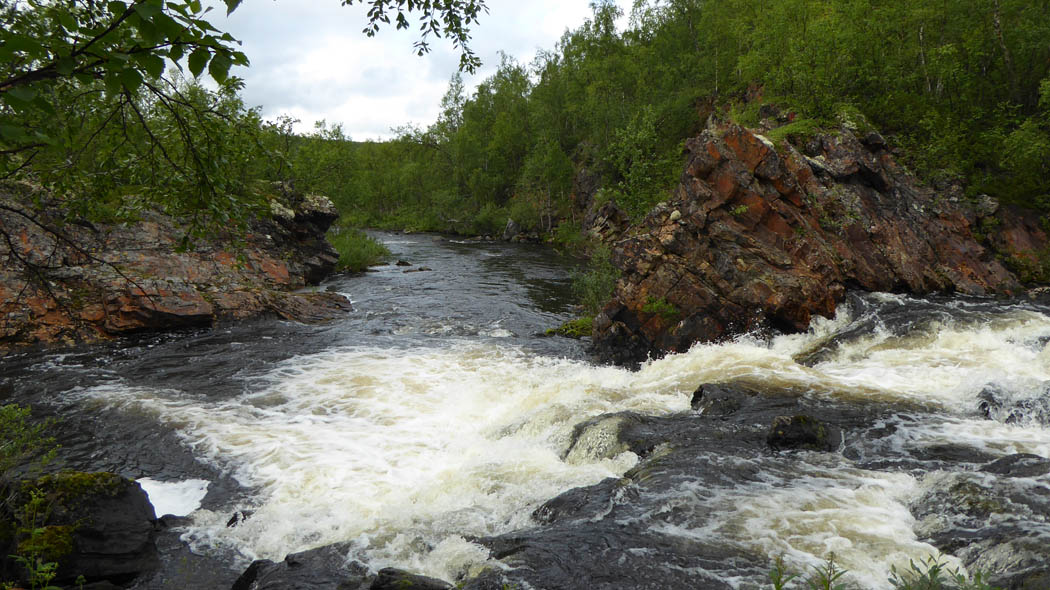 Nine fish species live in the national park, of which salmon, trout, whitefish and grayling are Salmonidae. The fish population also includes northern pike, perch, burbot, three-spined stickleback, and, the only cyprinid, minnow. In terms of their ecological condition, the running waters here are primarily fine, but the condition of a few channels occasionally deteriorates due to turbidity caused by gold panning upriver.

Riparian areas are often more favourable habitats than their surrounding areas, which can be seen in, for example,  groves fed by floodwaters. The river water deposits nutrients, solids and fine-grained soil along the riverbanks, which, when combined with a favourable microclimate, offer suitable conditions for the growth of small groves, even this far north. Such groves can especially be found along the banks of the Vaskojoki, Kietsimäjoki and Ivalojoki rivers as well as at the headwaters of the Lemmenjoki River. The vegetation found in the groves is more lush than their surrounding areas, providing a habitat for finicky species, such as the Nordic currant (Ribes spicatum), mountain melick (Melica nutans), Bowle's golden grass (Milium effusum) and Paris quadrifolia (Paris quadrifolia). The northern nature of Lemmenjoki's groves is evident by the presence of globeflower (Trollius europaeus) nd tall Jacob's ladder (Polemonium acutiflorum). The trees growing in groves are usually dominated by downy birch.

The Emblem of Lemmenjoki National Park is Wolverine