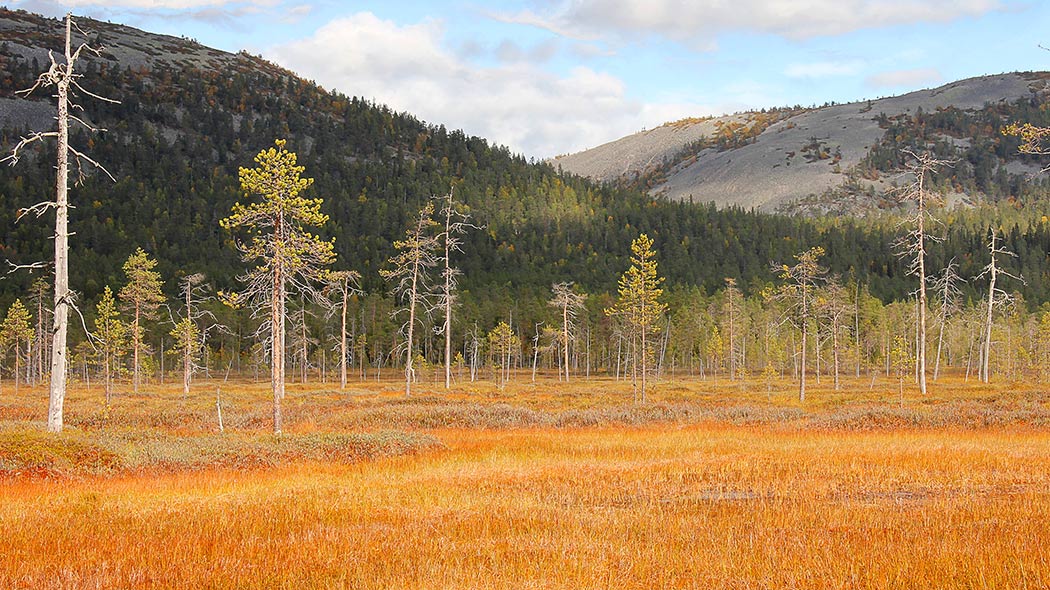 The southernmost area of great fells in Finland offers a versatile glimpse of the northern nature. Pyhä-Luosto National Park is a mosaic of open fell and aapa mires, silent old-growth forests and rugged gorges. 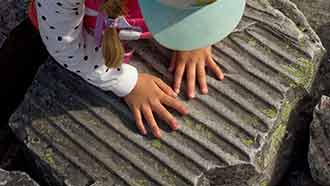 The tale of Isokuru gorge goes back billions of years

The silhouette of Pyhä-Luosto consists of a variation of gorges and fells. Experience the magic of the fells and see marks left by the waves of the sea billions of years ago! Read more > 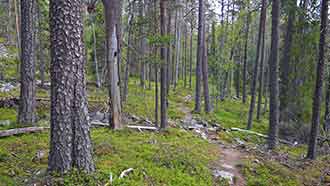 Pine trees with their thick bark and twisted dead standing trees reach for the sky. Beard moss and other lichens, mosses and shelf fungi are the signs of an old-growth forest. Read more > 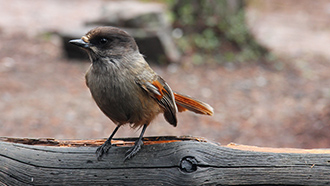 The Siberian jay is the emblem species of the national park. It is at home in old-growth forests which, together with the mires and fell areas surrounding them, are spectacularly rich in species. Read more > 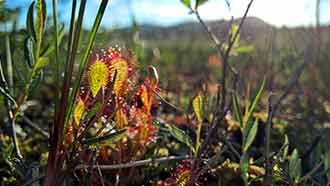 The skirts of the fells are decorated with attractive mires. Do you dare go off the duckboards in search of cloudberries? Read more > 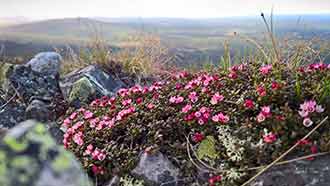 Plant enthusiast have plenty of delight on the colourful fells – from summer-flowering fell plants to vibrant autumn colours. Do not miss the southernmost groves of fell birches in Finland. Read more > 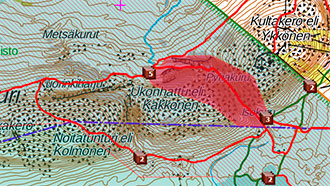 In Isokuru gorge, restriction zones prevent erosion and protect ancient monuments. Access to Peurakero is restricted between 15 Feb and 31 May for conservation reasons. Read more > 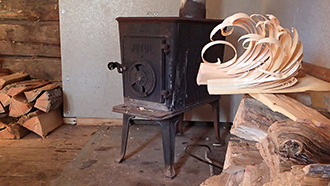 The national parks represent some of the finest nature in Finland. True hikers behave responsibly and take the environment and other visitors into consideration! Read more > 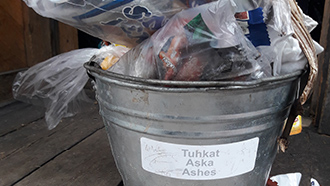 There are no waste bins in the national parks. Responsible hikers leave no trace in nature! Read more > 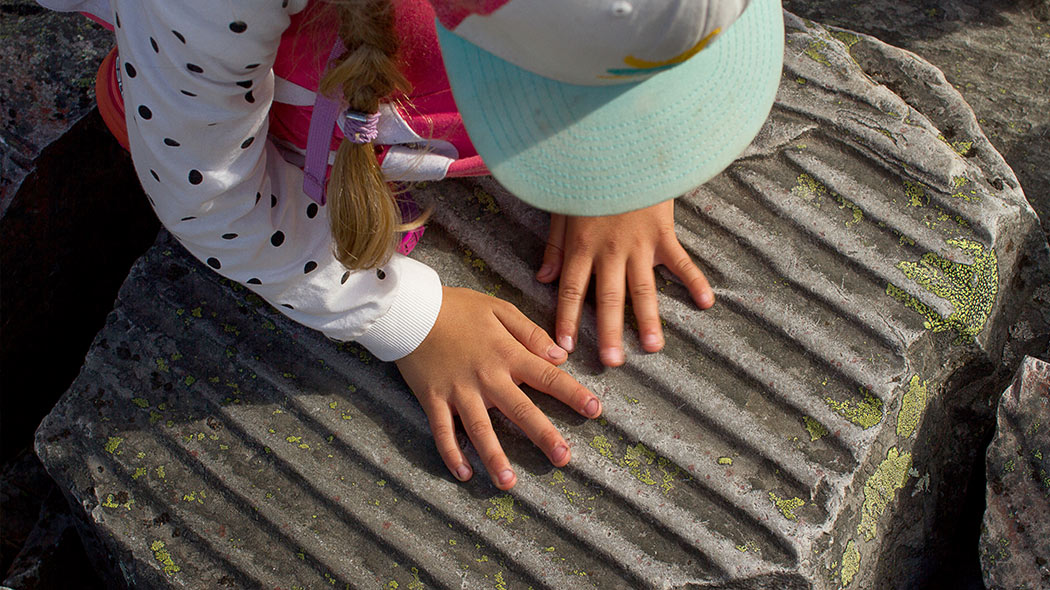 The 35-km-long fell chain in Pyhä-Luosto is a remnant of one of the Earth's oldest mountain ranges. It was formed over 2000 million years ago. The Pyhä-Luosto fells are mostly made-up of quartzite, which in turn was formed from ancient coastal on-shore and underwater sand. This hard rock type has resisted wear, while the mountain ranges other rock types have crumbled away. At some points ripples left behind by ocean waves of old are visible in the rock's surface. 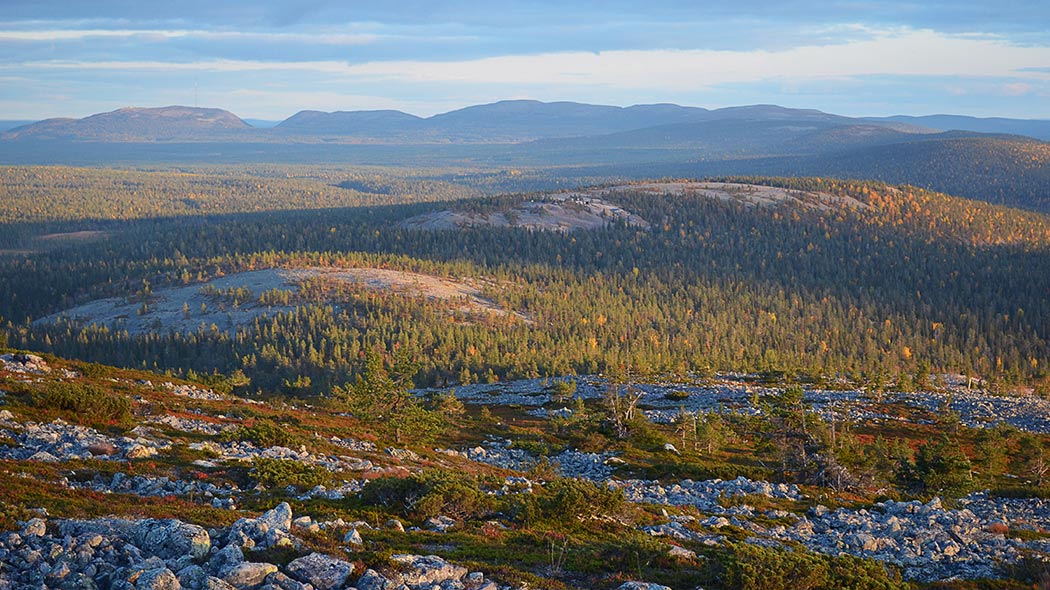 The fells stand-out from the low, level landscape surrounding them. The highest summits are Noitatunturi Fell at 540 metres above sea level and Luosto's scenic Ukko-Luosto Fell at 514 metres. Special features of the National Park are steep slopes, deep ravines, separating fell tops from one another, rugged quartzite quarries and scree patches. The sides of the ravines have been worn away by waters from melting ice. The National Park's deepest ravine is Isokuru, which is 220 metres deep and one of the area's most important sights. Sharp-eyed visitors will notice grooves left by water dripping down the slopes.

The timberline in Pyhä-Luosto is at an altitude of 320 to 400 metres above sea level. Because the fell tops are rocky and the bedrock is of quartzite it is quite rugged and there is very little vegetation. The lower slopes of the fells are covered by dense evergreen forests, which change further downhill into vast aapa bogs. Vegetation is quite lush lower on the slopes and in the herb-rich forests on brook banks. The mires in the area are part of the Northern Finland aapa bog zone. There is a diverse array of mire types and there are also lusher mires called fens in the Luosto area. There are many fens especially on the lower course of the River Siurunjoki. The area's many springs also enrich the mires. 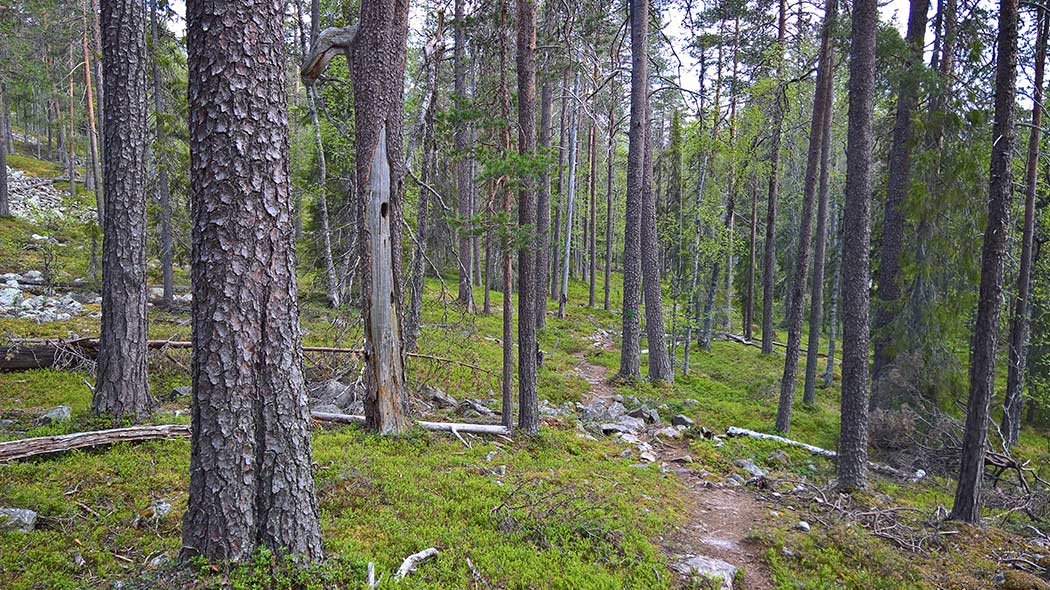 One quickly flies up, soon to be followed by another. Siberian jays are curious by nature and tend to keep watch on the branch of a nearby tree to see what hikers are up to.
While the Siberian jay, which favours sheltered old conifer forests, is the smallest bird of the crow family, it moves more like a tit. Hopping from branch to branch, it is always on the move, and its vivacity is only dampened by extremely cold temperatures. 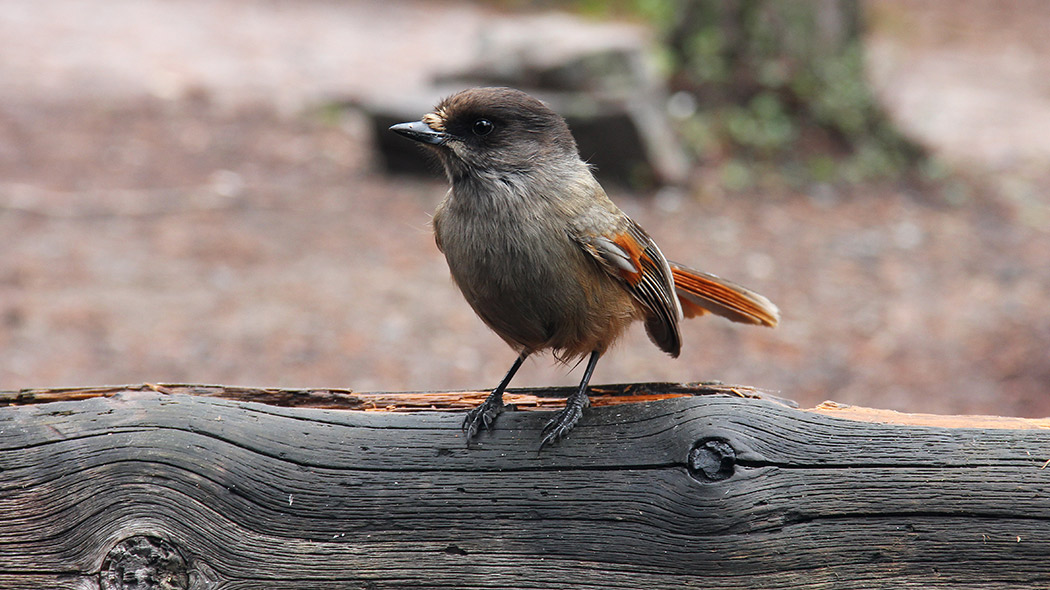 Siberian jays are happy to eat almost anything from berries and seeds to insects, fungi and the eggs and chicks of smaller birds. However, hikers’ picnics can be harmful for them. In the snow-free season, Siberian jays work hard to collect winter supplies, which they stash in cracks in the bark of the trees in their home forests.
While the largest population of Siberian jays is found in the extensive taiga forests of Russia, their range extends to the remote forested areas of Norway in the west. The Siberian jay stays in its territory all year round.
It is a near threatened and protected species. 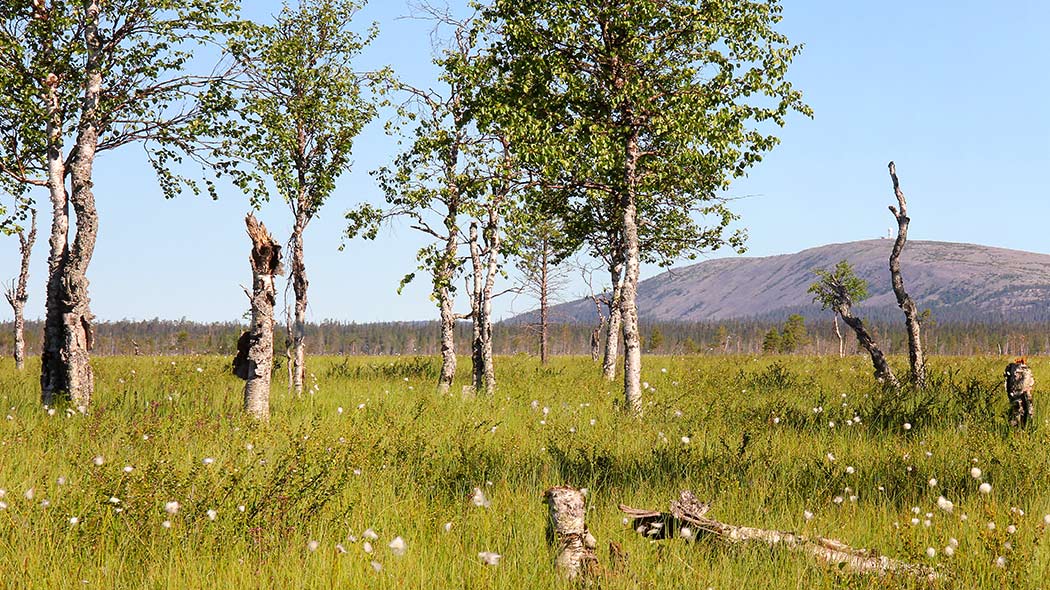 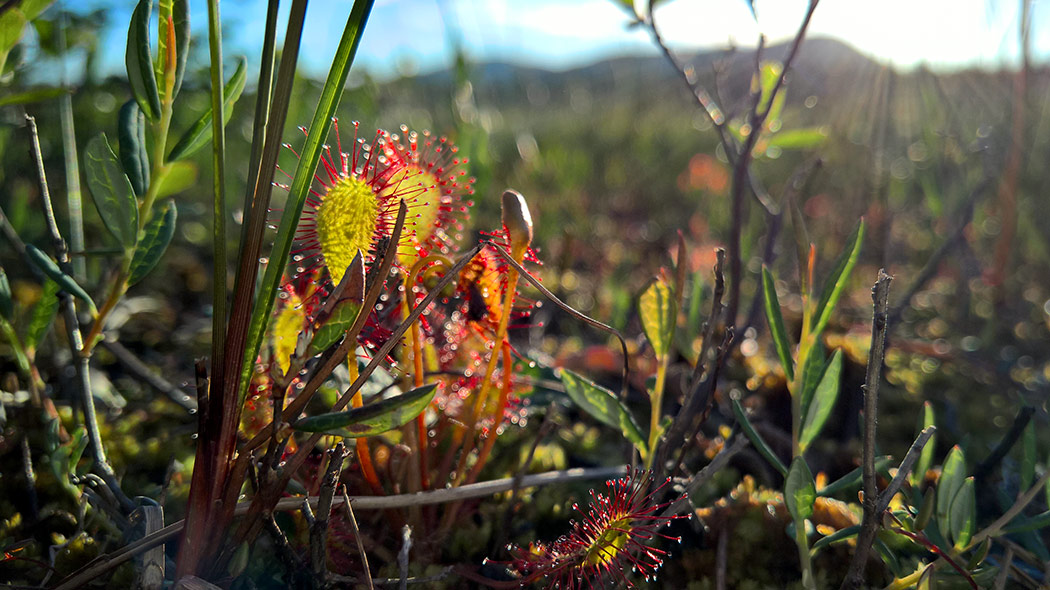 The vegetation of Pyhä-Luosto National Park is typical of Forest Lapland. Fell vegetation such as the Black Bearberry (Arctostaphylos alpina), the Alpine Clubmoss (Diphasiastrum alpinum), the Trailing Azalea (Loiseleuria procumbens), the Blue Heath (Phyllodoce caerulea) add variety. Blueberries (Vaccinum myrtillus) and lingonberries (Vaccinum vitis-idaea) can be found in the area's coniferous forests; where as cloudberries (Rubus chamaemorus) grow in the mires. Along brook banks in other lush growth areas there are more demanding species, such as Wood Crane's-bill (Geranium sylvaticum) and Lady Fern (Athyrium filix-femina). Vegetation indigenous of old-growth forests appear in the Luosto area. There are for example 80 different species of polypores (fungi dependent on deadwood), 11 of which are listed nationally as threatened. Many mosses and lichens appear in the area as well. 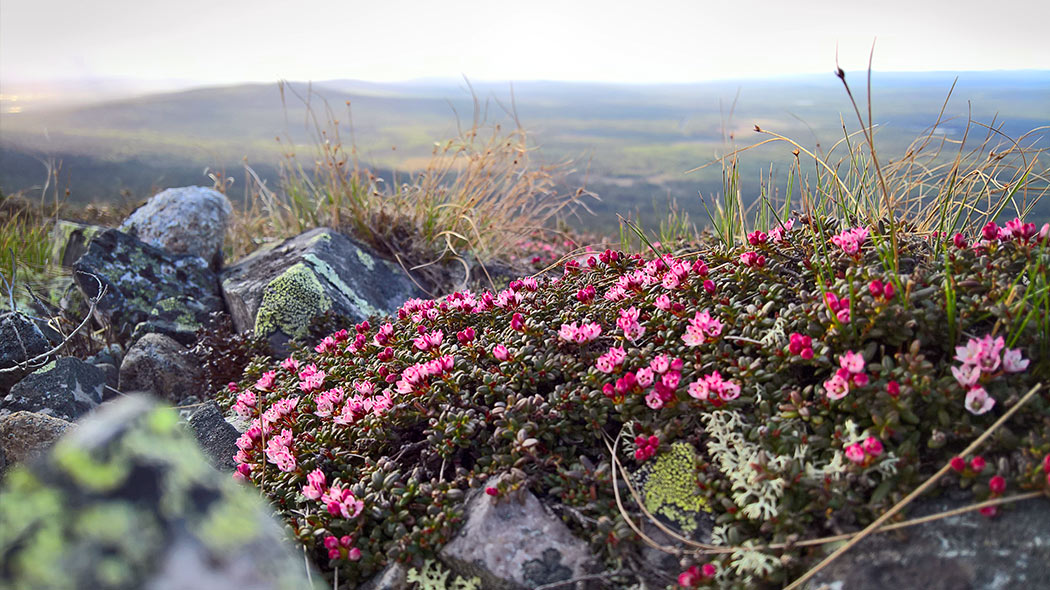 Mammals which inhabit the area area permanently are the European Otter (Lutra lutra) and the Brown Bear (Ursus arctos). Moose (Alces alces) dwell on the rims of mires and reindeer search for food higher up on the fell slopes. There have been sightings of 128 bird species in Luosto. A common sight is the Siberian Jay (Perisoreus infaustus) singing on the branch of an old pine. The Rough-legged Buzzard (Buteo lagopus) is a bird of prey, which can often be seen circling fell-tops in search of moles.