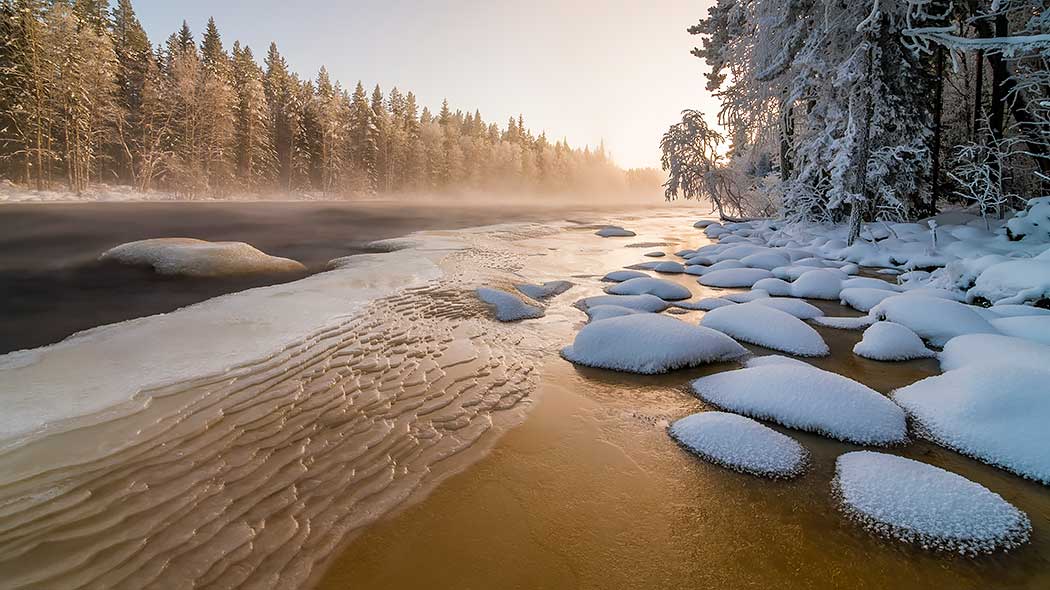 Lieksanjoki River has fast-flowing rapids that later pool into lakes. Some parts of the river are lined with handsome pine heaths. 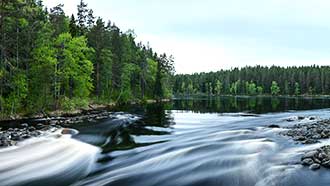 The white-water in the rapids is at its most spectacular during the spring flooding. You can see the official flower of Northern Karelia along the banks of Lieksanjoki River. Read more > 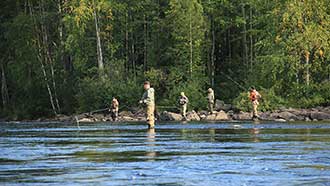 These waters are a real treat for fishermen

Fish in the beautiful landscape of Ruunaa. Stocked rainbow trout and brown trout make a great catch. Make sure you have the necessary permits. Read more > 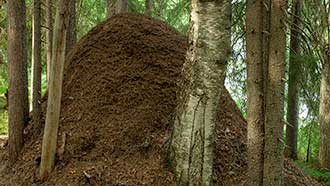 Many birds, such as the pied flycatcher, nest in the holes of trees. In the autumn, fungi grow their fruiting bodies on the side of dead trees. Read more > 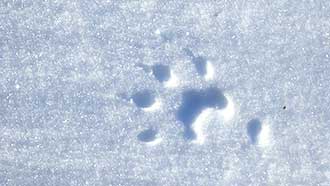 The timid bear avoids hikers. During the winter, you can see wolverine, wolf and lynx tracks on the snow. Read more > 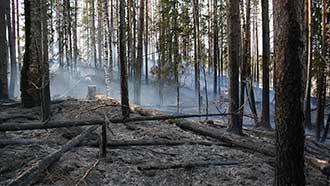 Prescribed burnings simulate the effects of natural forest fires. Increasingly rare insect and fungi species as well as woodpeckers and other hole nesters benefit from the fires. Read more > 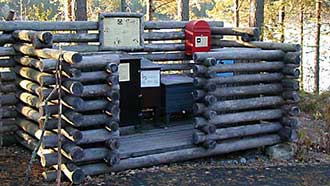 Keep nature clean! Ruunaa’s recycling points are located at the Siikakoski and Neitikoski parking areas and at the parking area east of Haapavitja. Read more > 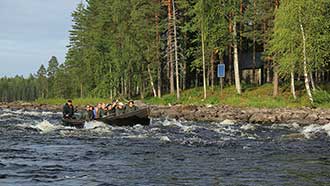 Nature is our second home. Let's work together to care for the environment of Ruunaa! Read more >

The landscape of Ruunaa Hiking Area is characterised by Lieksanjoki River, which with its rapids flows through the area. Deciduous trees add colour to the pine forests along the river course, so the scenery changes with seasons. At some places on the river banks grows the Prickly Rose (Rosa acicularis), the official flower of North Karelia.

It is possible to admire the changing scenery of Ruunaa, for example, from a canoe, from a hiking trail or from the lookout tower of Huuhkajanvaara, which is located at the highest point of the hiking area (183 metres above the sea level).

Lieksanjoki River has its source in Lake Lieksajärvi in Russian Karelia. On the Finnish side, it flows through the Elimyssalo Nature Reserve in Kuhmo before reaching Ruunaa. In the Ruunaa Nature Reserve, the river widens into Lake Ruunaanjärvi, which also gets water from Tuulijoki River, another stream starting on the Russian side. From Lake Ruunaanjärvi, Lieksanjoki River continues towards Lake Pielinen. The ecological state of the river is good. 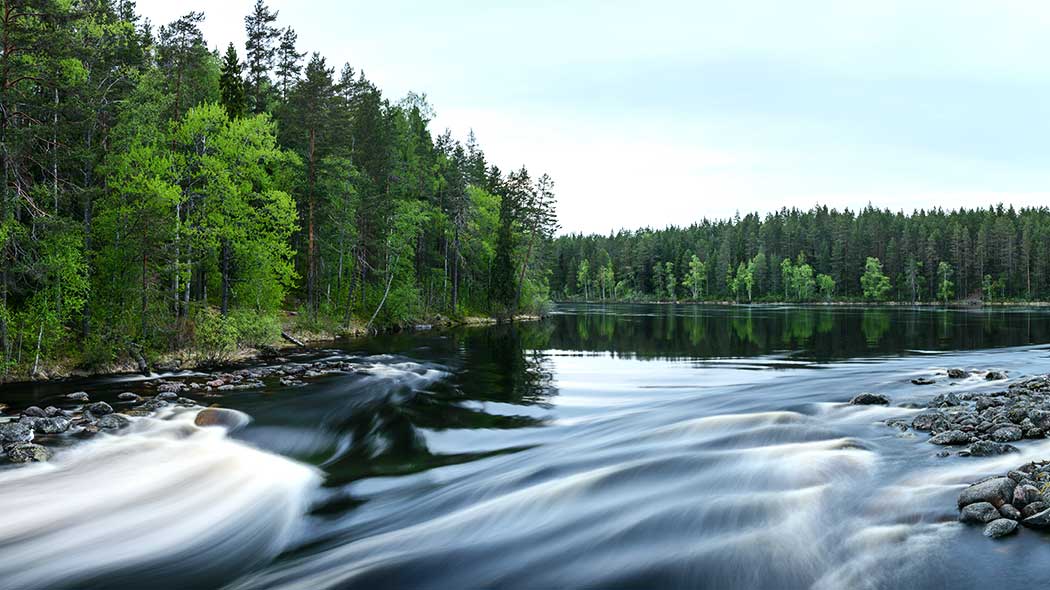 The section of the Lieksanjoki River meandering through the hiking area is about 17 kilometres long. In addition to streams and lakes, it also boasts six rapids. The elevation difference between Paasikoski, the first upstream rapids, and Siikakoski, the last downstream rapids, is almost 16 metres. The rapids are at their most impressive during spring floods, from the middle of May until early June.

The insect larvae living among bottom rocks and vegetation catch microbes and other debris from flowing water. Depending on the species, the larval stage lasts between weeks to several years.

For example, the larvae of blackflies, attaching themselves to rocks at the bottom of the rapids, have fans surrounding their mouths catching passing debris. Shielded by protective cases, the larvae of some caddisfly species crawl among the bottom rocks or vegetation seeking food. They have built the cases from material on hand: small stones and pieces of twigs and plants. Caddisfly larvae without a protective casing build a net for catching food.

Larvae of stoneflies also criss-cross the bottom of the river, preying on larvae of other insects. The water bug (Aphelocheirus aestivalis), another species inhabiting the Ruunaa rapids, also feeds on insect larvae, catching them with its sucking rostrum.

Insect larvae and the adult insects hatching into winged life through pupation are eagerly caught by fish. There are stone loaches living at the bottom and along rocks in the shallow sections of Lieksanjoki River, preying on larvae of caddisflies and mayflies. This species of fish has barbels around its mouth, allowing it to detect its prey even when it is dark. In fact, it spends its days in hiding among shore rocks or vegetation.

Minnows are on the move in shoals during daylight hours, preferring shallow waters. They eat water fleas, insect larvae, shellfish and roe and fry of other fish. When facing danger, the whole shoal quickly disappears between rocks. Minnows are important prey for such fish species as sea trout and grayling. A minnow caught by a predatory fish releases a chemical into the water, prompting other minnows and other fish understanding the message to flee.

Bullhead is another small fish inhabiting shallow waters. It lacks the swim bladder, which means that it starts descending as soon as it stops swimming. In spring, the male builds a spawning nest. The female lays the eggs on the nest ceiling where they are fertilised by the male. The male takes care of the eggs by fanning them with its fins to ensure a good supply of oxygen and by protecting them against predators.

In summer, the fishermen on the banks of the rapids are often accompanied by herring gulls, lesser black-backed gulls and goosanders preying on catch. There are black-throated divers and common goldeneyes nesting at the lakes between streams. Swans stop at ice-free places in early spring and late autumn to rest and seek food. 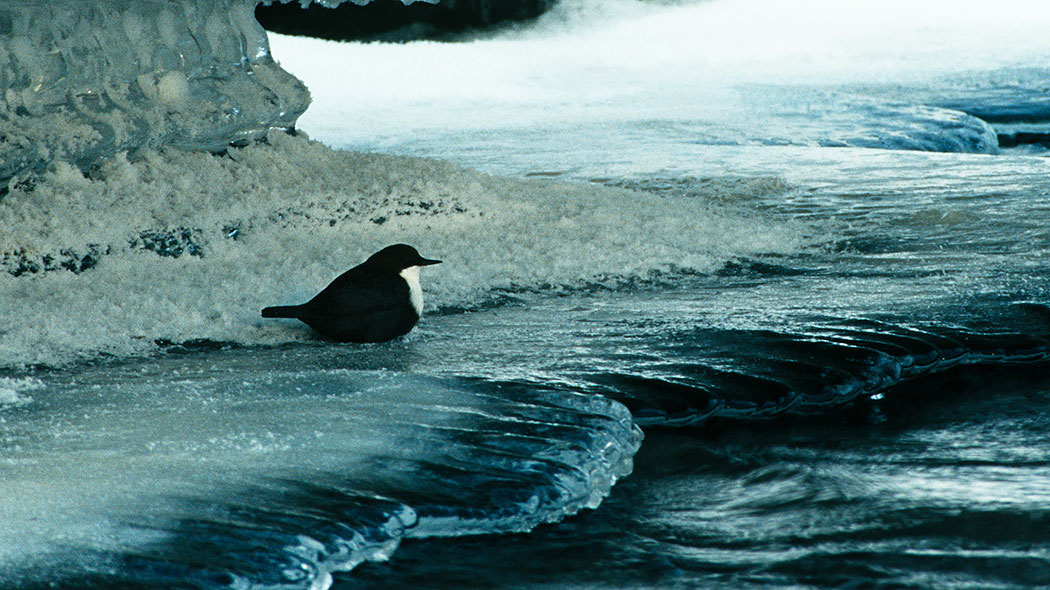 Dipper is a regular visitor at Ruunaa rapids in winter. It is a northern species but spends the coldest
winter months in more southerly locations as its home streams remain frozen until spring. Dippers plunge into the water to catch insect larvae from the bottom of the stream. In early spring, you may be able to hear the crisp warble of the male. 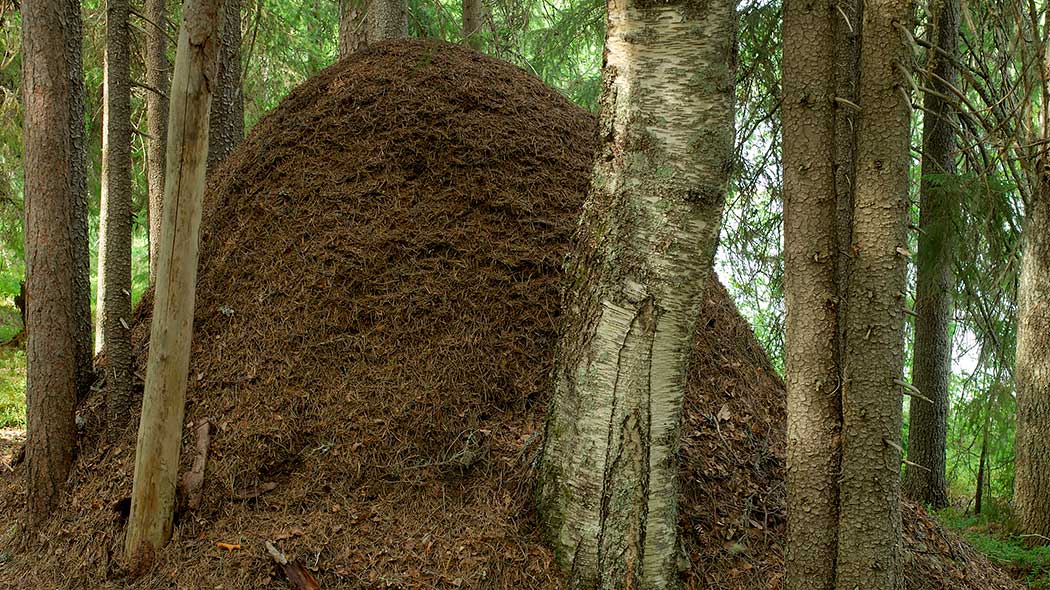 There are also forests aged over 100 years in many parts of the hiking area. The oldest of them can be found on the southern shore of Lake Neitijärvi and in Kattilaniemi.

A wide variety of different birds nest in the old-growth forests in summer. Tits, common redstarts, pied flycatchers and other hole-nesters prefer forests with deadwood trees. The sound of a male cuckoo is also characteristic of Karelian forests. At the same time, the female cuckoo is quietly looking for a hole where it could lay an egg for such species as a common redstart to brood. Black woodpecker usually announces its presence through a loud kree-kree-kree flying call, while the distinctive horizontal rows of holes in a pine or a spruce are the creation of a three-toed woodpecker.

Insect life in the Ruunaa forests has also been studied. A number of rare beetle species have been found in the nature reserve. For example, the flat and light-coloured larvae of Boros schneideri, a brown and cylindrical beetle, thrive under the bark of pines killed as a result of forest fires or restoration burning. At the same time, thick long-decaying tree trunks are home to the larvae of the species Ceruchus chrysomelinus.

A variety of polypores also live on fallen trunks. Antrodia crassa, one of the rarest polypore species in Ruunaa, only occurs on old fallen pine trunks. Fallen deadwood in Ruunaa is also home to such polypores as Antrodia albobrunnea, Antrodia infirma, Skeletocutis stellae and Cinereomyces lenis, which have all become less common in southern Finland where deadwood trees are less common than in the past.

With luck, a hiker in Ruunaa may spot the traces of all large predators occurring in Finland. You rarely manage to see the animals themselves because they are good at evading humans. 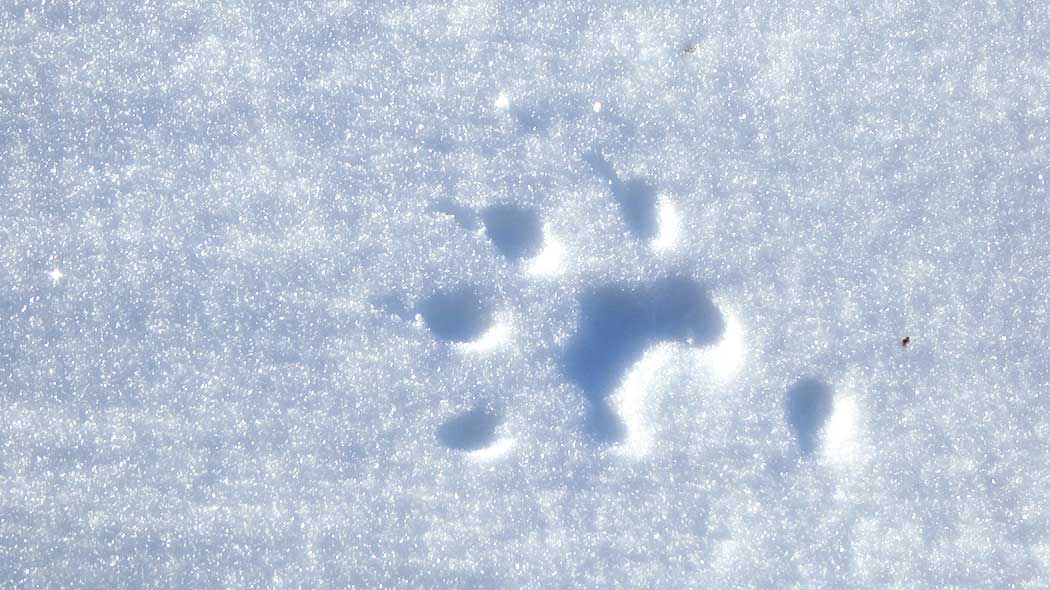 In Ruunaa, the territories of large predators cover areas on the Finnish and Russian side of the border. You are most likely to come across bear droppings peppered with berries during years with good berry harvests.

The territories of wolf packs and pairs extend well beyond Ruunaa. Footprints on the snow are usually the only trace of the wolves in Ruunaa. Wolverine, which feeds on carcasses, also benefits from the presence of wolves. It also preys on small mammals, hares, foxes and birds. When hunting, wolverines can wander dozens of kilometres on a single day.

Restoration burning speeds up the natural restoration of trees and other species in forests formerly used for commercial purposes. Most of the trees survive the fire but many of them die, providing a suitable habitat for rare fungi and insects. The tree-toed woodpecker also feeds on the insects living in standing deadwood trees. 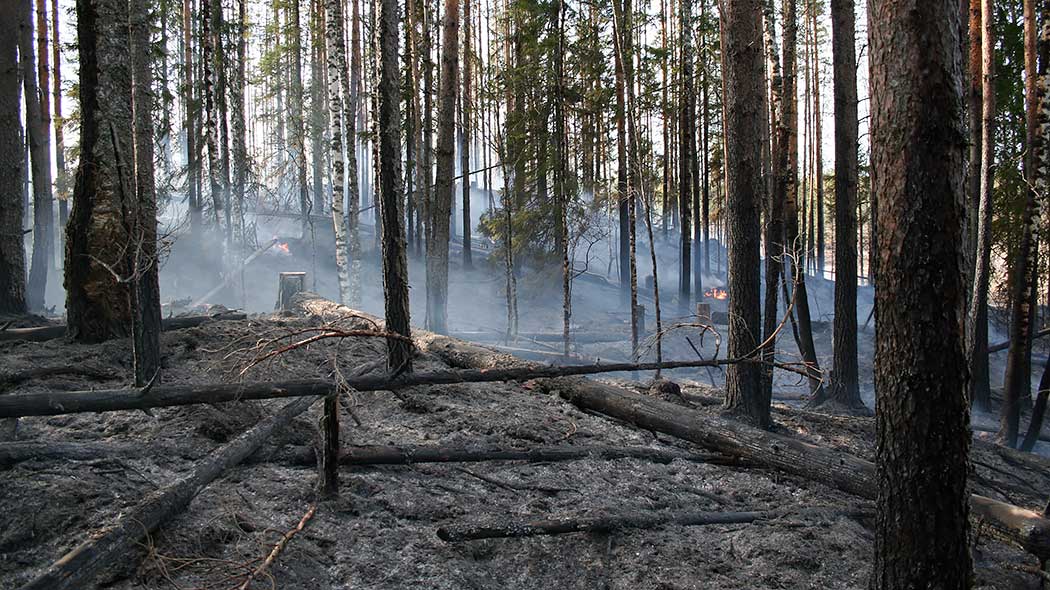 Saplings of deciduous trees grow in the light openings left by dead trees and the evenly aged pine forest will gradually turn into a multi-layer mixed forest.

Restoration burnings were carried out in the Ruunaa Nature Reserve in 2005 and 2009. In the next few years, two pine forests in the hiking area will also be restored through burning as part of the Beetles LIFE project.

The Emblem of Ruunaa Hiking Area.