A majority of Laajalahti Nature Reserve consists of open water. During recent years approximately 300 water bird mating pairs have nested at the bay; the three most common species being the Mallard (Anas platyrhynchos), the Eurasian Wigeon (Anas penelope) and the Great Crested Grebe (Podiceps cristatus). The species which are the most abundant during migration time are the Mallard, the Eurasian Wigeon, the Great Crested Grebe and the Common Merganser (Mergus merganser). There are two small islands at the mouth of the bay, which are home to several nesting species, such as the Black-headed Gull (Larus ridibundus) and the Tufted Duck (Aythya fuligula).

At broad belt of reedbed covers the west edge of the bay. It offers nesting and camouflage spots for many species. The reeds can grow to a height of possibly 4 metres. Hiding amongst them with water bird species are the warblers and rallidae, which are difficult to see but can be heard clearly. A new species to inhabit the reedbed is the Bearded Parrotbill (Panurus biarmicus).

The reeds are also inhabited by spawning fish, such as the pike (Esox lucius), the pikeperch (Stizostedion lucioperca) and the bream (Abrahamis brama). Laajalahti Nature Reserve is an important breeding area for the perch (Perca fluviatilis) and the pikeperch.

For the most part the forests in the nature reserve are herb-rich forests or deciduous forests in flood meadows. The most species-rich grove is the one on a brook side east of Villa Elfvik. Some plant species which grow there are the Hop (Humulus lupulus), the Alternate-leaved golden-saxifrage (Chrysosplenium alternifolium), the Ostrich Fern (Matteuccia struthiopteris), the Touch-me-not balsam (Impatiens noli-tangere) and the European filbert (Corylus avellana). The bird population in the herb-rich forests is versatile. The Thrush Nightingale (Luscinia luscinia), the Garden Warbler (Sylvia borin) and the Blackcap (Sylvia atricapilla), which fill the area with there beautiful song visit the nature reserve every summer. The threatened Lesser Spotted Woodpecker (Dendrocopos minor) pecks shoreline trees. 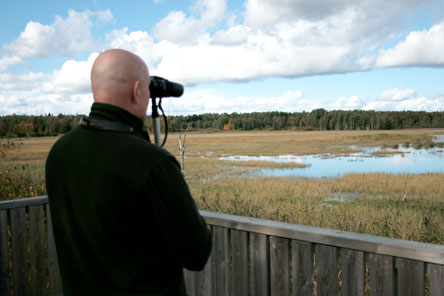 The old forest around Villa Elfvik is park-like and part of it belongs to the nature reserve. The spruce dominated herb-rich forest next to the boat shed has been untouched by forestry and will remain protected. In time this then old-growth forest will offer the perfect growth place for fungi and insects which live on decaying wood.

There are shoreline meadows on the edges of the nature reserve, which were used as pastures up until the 1960s. Today parts of the meadows are overrun by shrubs, but some of them are being restored and are now mowed or used as pastures. During summer cattle and sheep graze there. Visitors can see the difference between pasture meadows and other meadows from the bird watching tower near Villa Elfvik.

The results of having livestock graze in the area are beginning to show little by little. Waders have benefited from this the most. The Northern Lapwing (Vanellus vanellus) and the Common Redshank (Tringa totanus) for example have started to again nest in the shoreline meadows at Laajalahti. The number of waders stopping at the bay during migration has also increased.

Villa Elfvik (www.visitespoo.fi) an Art Nouveau - style building at the north end of Laajalahti Nature Reserve was built at the beginning of the 20th Century. Today it serves as a nature centre run by the town of Espoo. The centre has nature and environment themed exhibits and there's a café in the building. The Espoo Environment Centre organises outdoor tours at Laajalahti, which start off from the grounds of Villa Elfvik.

During summer cattle and sheep graze in the nature reserve shoreline meadows.