History of the Raseborg Castle Ruin

In the late Middle Ages, Raseborg Castle represented the power of the King of Sweden in Finland. Life in the castle varied from the everyday chores of a simple administrative centre to luxurious court life.

Establishment and structure of the Castle
Heyday
Warfare and everyday life
Abandonment of the castle and brief restoration to glory
New era as a tourist attraction, and restoration

Establishment and Structure of the Castle

Raseborg Castle was built in the 1370s as an administrative centre for Western Uusimaa. It was also an important defensive fortification and a commercial centre intended as a counterpart to Tallinn. In fact, after the Turku and Vyborg Castles, Raseborg was one of the most important strongholds of the crown in Finland.

Raseborg Castle was built in tumultuous times, as the realm was undergoing periodical civil war and the coastal regions were plagued by the Victual Brothers, or Baltic Sea pirates. The castle was built under the leadership of Tord Bonde, who served as the castellan for more than 20 years, on a site that was easy to defend: an island in the inner archipelago, protected by high walls, a steep cliff, and water all around. The current lawn was covered by the waters of the bay, as back then the sea level was around two metres higher than today. 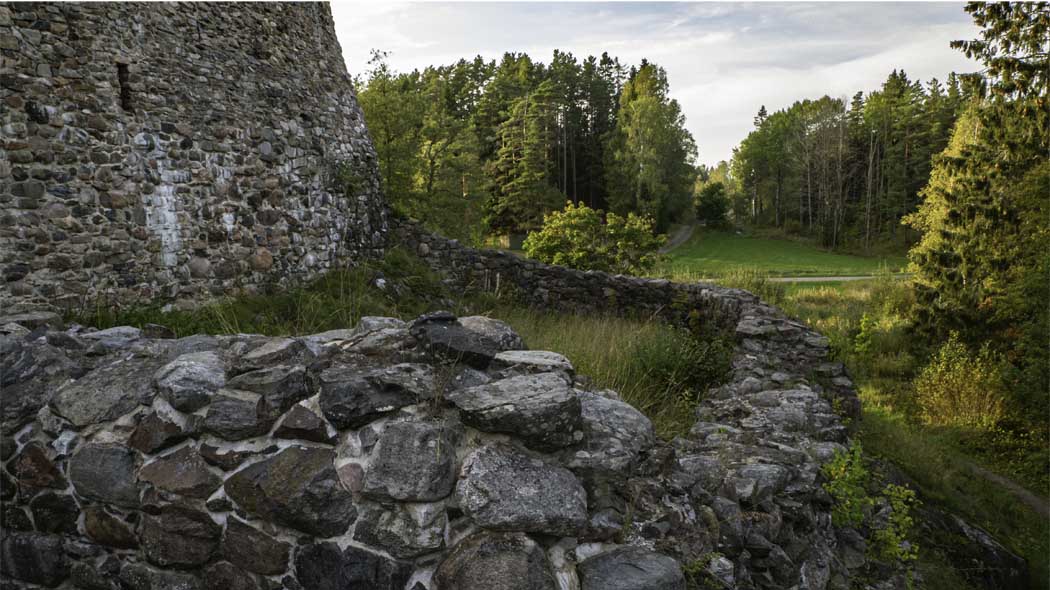 The castle comprises the main castle and three baileys. Between the baileys, to the east of the main castle, there was a fortified gateway, the so-called barbican, a complex defensive fortification equipped with a drawbridge. The castle was surrounded by a wooden palisade erected in shallow water for the purpose of hindering uninvited ships from reaching the castle. Wooden stakes can still be identified in the grass surrounding the castle.

In the Middle Ages, castles were major economic centres that were supported by their own farms, the manor farms. Raseborg Castle had plenty of livestock and the estate included large fields, pastures and a mill. Local peasants in vassal service contributed to building the castle and handled agricultural chores. 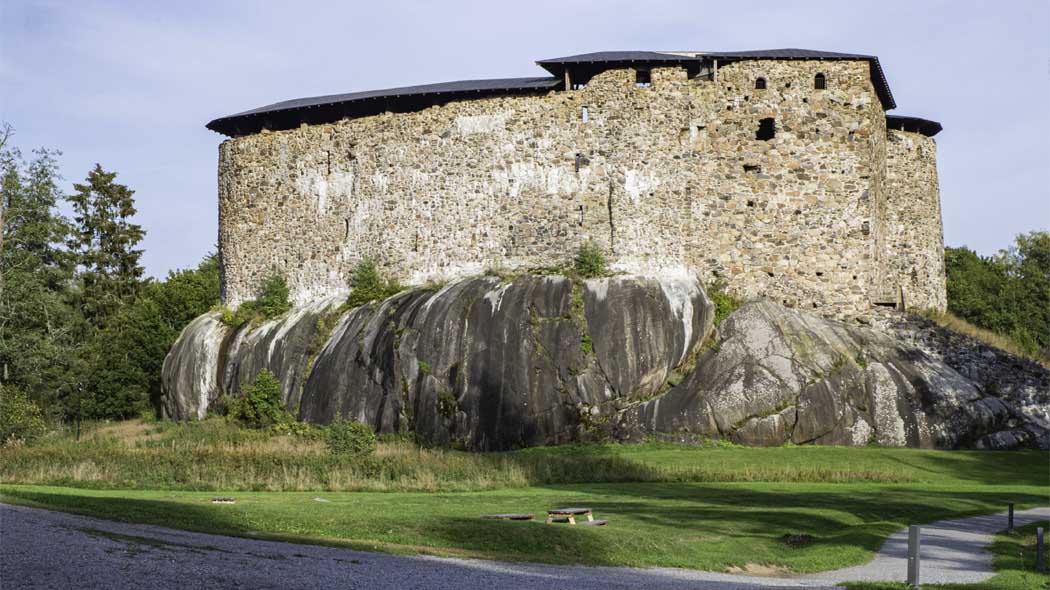 The castle was at its prime in the 1450–1460s under the rule of King Charles VIII of Sweden (in Swedish: Karl Knutsson Bonde). Charles, who reigned as King three times (having been deposed twice), held court in Raseborg in 1465–1467.

Most of the subsequent constables of the castle were members of the most influential aristocracy in the kingdom, and lived in the castle for lengthy periods of time. Sten Sture the Elder, the Regent of Sweden, stayed in Raseborg on several occasions at the turn of the 1480s and 1490s, for instance when he hosted the negotiations held with the Teutonic Order that reigned in Estonia and Livonia.

Around the turn of the 16th century, the Danish posed a threat to the coast of Uusimaa. In 1521, Raseborg Castle Castle was garrisoned by the troops of King Christian II of Denmark. No details about the battle remain, but it is known that Nils Eskilsson (Banér), the constable of the castle at the time, and Bishop Hemming Gadh, serving as the King's messenger, were beheaded after the coup.

Within two years, the followers of King Gustav Vasa of Sweden reconquered the castle for Sweden. The castle was in poor condition, probably due to the siege, battles and conquest. According to local folklore, the castle was damaged by the fire of Danish cannons.

King Gustav Vasa planned to abandon the castle as it had fallen into disrepair, but the castle was nevertheless restored as the centre of the local bailiwick. The castle was run by a bailiff, assisted by a couple of scribes, an island bailiff and some local noblemen. The bailiff's wife was responsible for the castle's garderobe. The castle chaplain provided spiritual guidance to the castle's inhabitants and ran the castle's chapel. Its garrison consisted around twenty footmen and mounted soldiers.

The large number of castle artisans included the castle smith, cooper and bakers. Due to high beer consumption, the castle had its own brewery. The cook and the cupbearer with their assistants took care of preparing and serving food. The castle's own fishermen ensured that there was no shortage of food. The best beer and bread were reserved for the most noble and influential castle inhabitants, while hirelings had to make do with home-brewed beer and cheaper bread.

Abandonment of the Castle and Brief Restoration to Glory

Although the castle was renovated, the King changed his mind and began planning a new administrative, economic and military centre. Land uplift is one of the factors contributing to the abandonment of the castle: the sea retreated from around the castle and its favourable location was lost.

The environs of the Helsinginkoski rapids were chosen as the site of the new centre and the city of Helsinki, and a king's manor were established there in 1550. In the late 1540s, the old Raseborg Castle was being wound down and was to be abandoned completely during the first years of the following decade.

However, Helsinki proved disappointing to Gustav Vasa. The construction of a castle came to nothing and the city's harbour did not live up to the King's expectations. The search for a new centre began and, in early 1556, Raseborg Castle regained its prime position in the bailwick. This was a short renaissance for the building as a bailiff's castle and one of the administrative centres of John, Duke of Finland.

But it was also to be Raseborg's swansong. The building, had fallen into disrepair, had reached the end of its lifecycle and its armoury was totally empty. Parts of the castle, including some of its beer cellars, had collapsed. This gave momentum to Duke John's plans to establish yet another administrative centre. In August 1558, the building of a new king's manor in Tammisaari began instead of repairs to Raseborg Castle, and the old location was abandoned for good. However, the castle's manor farm continued operating. Standing on the edge of a field one kilometre away from the castle, the Raaseborg Manor still dominates the landscape of the western bank of the Raaseporinjoki river.

New Era as a Tourist Attraction, and Restoration

The abandoned castle stood deserted for over 300 years, and the castle and its surroundings became completely overgrown by vegetation and trees. But in the early 19th century, the romantic castle ruins began to attract tourists.

The restoration of the castle as an attraction began at the end of the 1880s. The first stage of the restoration involved excavations to reveal the entire main castle, the repair of the walls' surfaces and the building of a wooden gangway on the inner side of the walls.

A new restoration period began in 1905, with the roofing of the southern wing of the main castle and the ramparts of other wings. The protective canopy of the tower was renewed and stairs and a bridge were added to the castle. During the third restoration phase, in 1936–1939, the new structures of the round tower were demolished and two intermediate floors were built. The protective canopies of the castle and the wooden gangways around it were demolished.

The fourth stage of restoration in 1960–1972 involved the complete replacement of the wall in the southern bailey that was about to collapse. It was also moved slightly westward!  Archaeological excavations were performed in order to provide guidance for the repairs.

The fifth restoration phase began in 1978, involving repairs of the wall structures that were at risk of collapsing, the building of gangways and platforms to the castle, and the covering of the entire main castle. A plank floor was built in the knights' hall of the main castle. The major repair phase was completed in 1988 as the castle was restored to its current form. 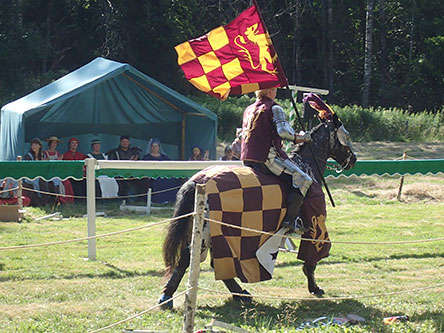 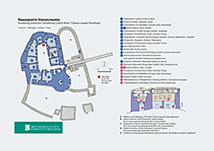