A cross-section of a restored charcoal pit can be found at its original location by Mäntypolku Trail close to Suomu Nature Information Hut. It is a reminder of how people lived in the 1940's. When it became evident that the Winter War would begin locals started preparing for hardship as during wartime no fuel could be imported from abroad. For this reason the charcoal engine was invented. Charcoal collectives were formed mainly on state owned lands to ensure that there was enough wood. One of these was near the Suomu forest ranger station. There were also charcoal pits located on the lower course of the River Surkanpuro and by Lake Sihvonlampi. First dry dead trees from pine mires were used for charcoal pit. There are a few remains of pits left in the Patvinsuo area from this time.

Burning charcoal in a pit is a three week process. During this time the pit masters lived in saunas, which were built by the pit for this purpose. The girth of a charcoal pit was approximately 28,5 metres and it could take as much as 250 cubic metres of wood.

First a dry, level and stoneless heath was chosen as the location. The location had to be shielded from the wind and next to a body of water. Erecting of the pit began by pitching a central pillar. On top of this pillar was a fuse for lighting the fire. Then a floor of lath was laid out at the bottom of the pit on top of which 3-metre-long logs were set up around the central pillar so that the smaller end of each log pointed outward. The logs were covered with twigs and branches and these in turn with earth. The covering had to be compact as otherwise the smouldering charcoal would have set ablaze. Last an air hole was built so that gases, which were explosive, could be let out of the pit. A duct led from the bottom of the pit to this hole. 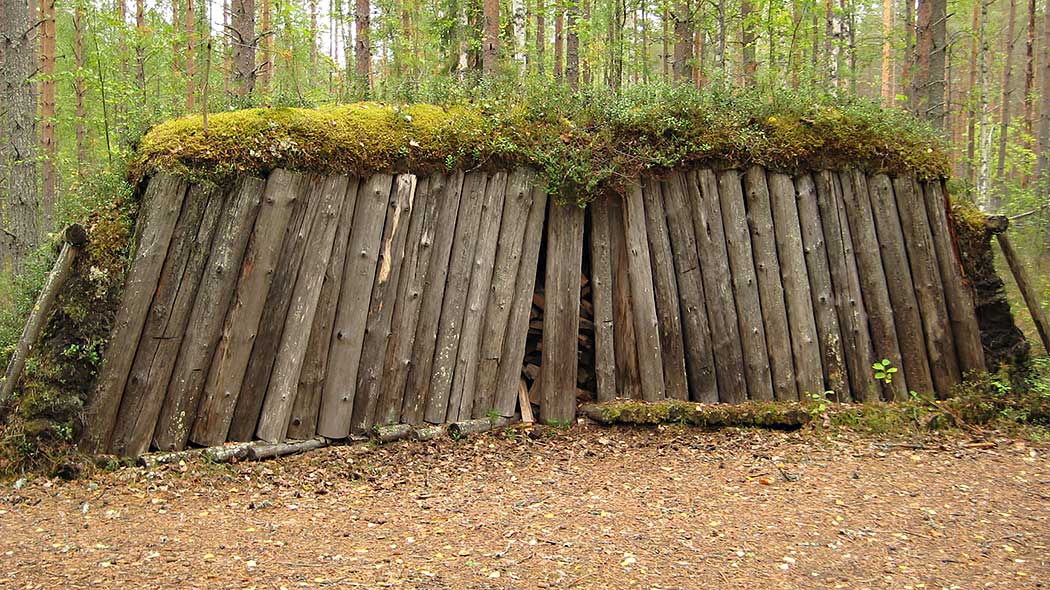 When the pit was hot enough, burning coals were dropped into it. Dry firewood was also added to ensure that the fire burnt properly. The original stove was then taken apart and a pipe, through which gases could escape, was built from wood. The embers had to be watched day and night.

If a pit had been burning so long that flames were visible at its bottom, a metal rod was stuck into the pit. If there were still hard pieces of wood left the fire was kept lit. When all the wood had become charcoal, it was hammered into a dense package and left to cool for a couple of days. The charcoal was watched until it was certain it was cooled enough. The same pit was often used for many years.

The charcoal was transported by horse drawn carts to the barn of the forest ranger's estate. The charcoal was crushed and sorted. During wartime women took care of this work. The black marks left on the faces and hands of these women were not often removed by imitation soap, which was used because of rationing. "Hiilienkelit" - The charcoal angels packed charcoal into paper bags, which were then transported by automobile to the Village of Lieksa.

During the Second World War Soviet soldiers caused much destruction in the Patvinsuo area. Civilians as well as soldiers were killed in attacks carried out by groups of Partisans. Fear of these attacks drove locals sleep in the areas backwoods in ‘korsusaunas' or meadow barns. ‘Korsusaunas' were saunas partially dug into the ground and used as shelters and weapons storage during wartime.

After the war, locals found weapons that Partisans had hidden in tree stumps. Finding a parachute in one of these hidden stores was always a lucky stroke for the local women. The fabric was used to sew comfortable orange silk pants.