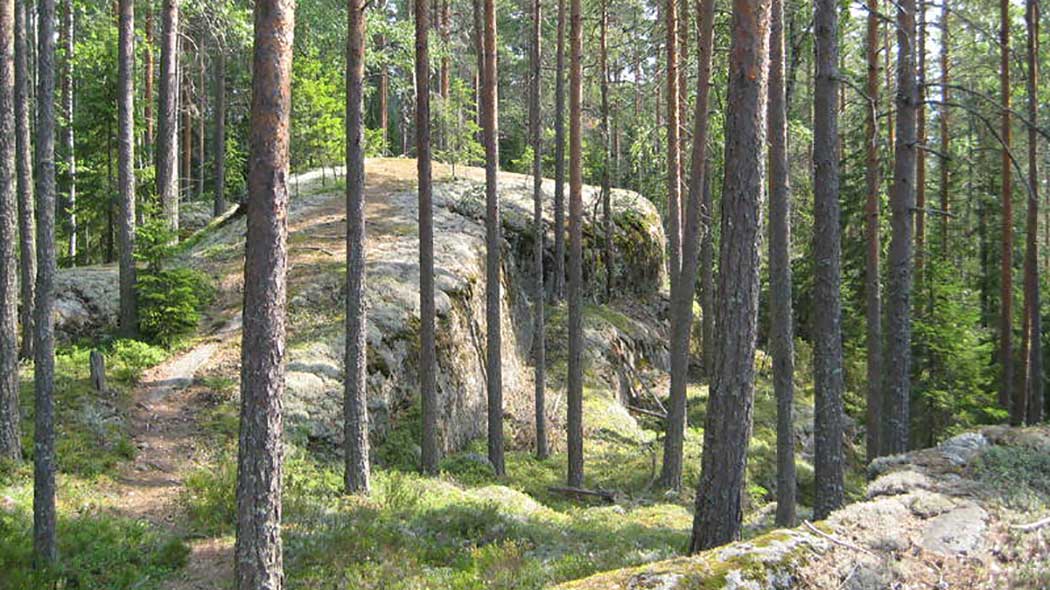 In the Isojärvi National Park, the hilly forests and deep ravines alternate in the landscape that has been moulded since the ice-age. The red-throated loons that call out from the ponds and beavers that glide silently on the surface of water provide a touch of the wilderness. 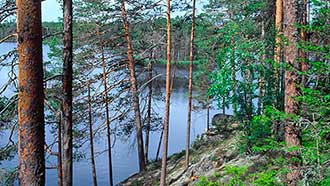 The slopes in the area take you from high rocks down to the bottom of a ravine. Lake Isojärvi was formed in a crack along the earth’s fracture lines that run from south-east to north-west. Read more > 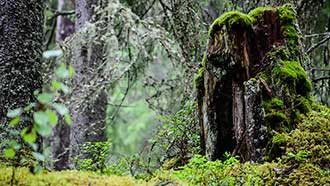 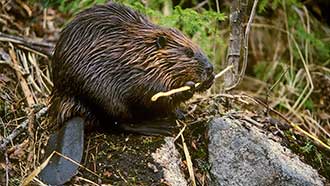 A master of dam building, the mysterious North American beaver (Castor canadensis) is the regional emblem of the National Park. It has left traces in almost all small lakes and ponds. Read more > 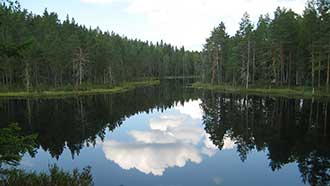 The waters flow east and west

The hills of Lortikanvuori and Vahtervuori act as water dividers. To the east of them, the waters flow to the Gulf of Finland and on the west, to the Gulf of Bothnia. Read more > 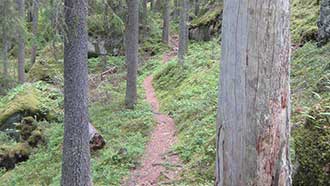 Please stay on the paths when you are in the restricted areas at Lortikka and Latokuusi. Also note the landing restrictions at Lake Isojärvi. (julkaisut.metsa.fi) Read more > 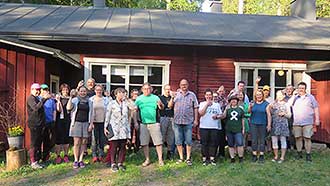 Conservation work is done together 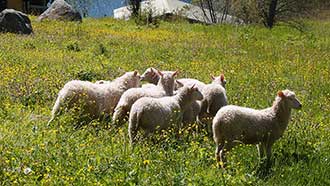 Become a shepherd in the island of Luutsaari

Sheep grazing has helped traditional gardens and meadows to once again bloom with rare flowers. This also benefits many butterflies and insects. Read more > 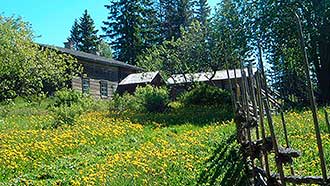 Management of heritage landscapes in Huhtala

The Huhtala crofter’s hut, located in Isojärvi National Park, is part of the settlement history of the region. Its grounds are maintained by grazing and scything. Read more >

There are large altitude differences at Lake Isojärvi

Rugged hills and deep ravines alternate in the landscape of the Isojärvi National Park. The landscape, which is characterised by steep terrain, was formed 200 million years ago as the Earth’s crust was fractured into fissure valleys stretching from northwest to southeast. The last Ice Age smoothed the rocks and moved large boulders but the existence of the fissure valleys prevented the formation of eskers. Vahtervuori, the highest point in the national park, rises 219 metres above sea level and about 100 metres above the surface of Lake Isojärvi. 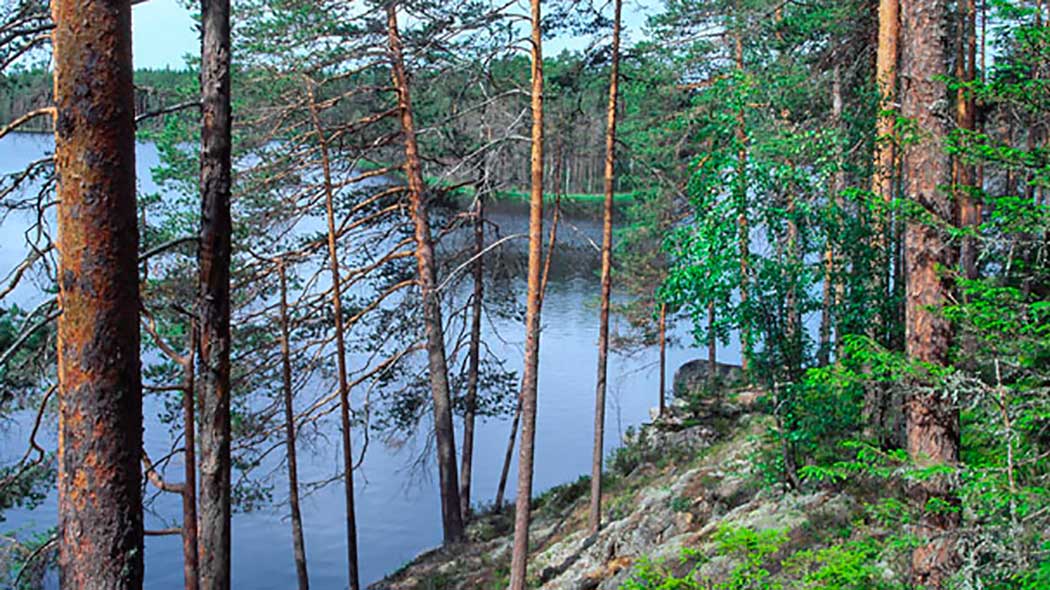 Isojärvi is a barren clear-water lake inhabited by such species as vendace and whitefish. The lake was formed at the bottom of a ravine and its deepest point is more than 70 metres. Lake Isojärvi, after which the national park is named, is outside the protected area but its rugged shores and cries of the Black-throated Diver (Gavia arctica) heard from its open stretches add to the fascination of the area. 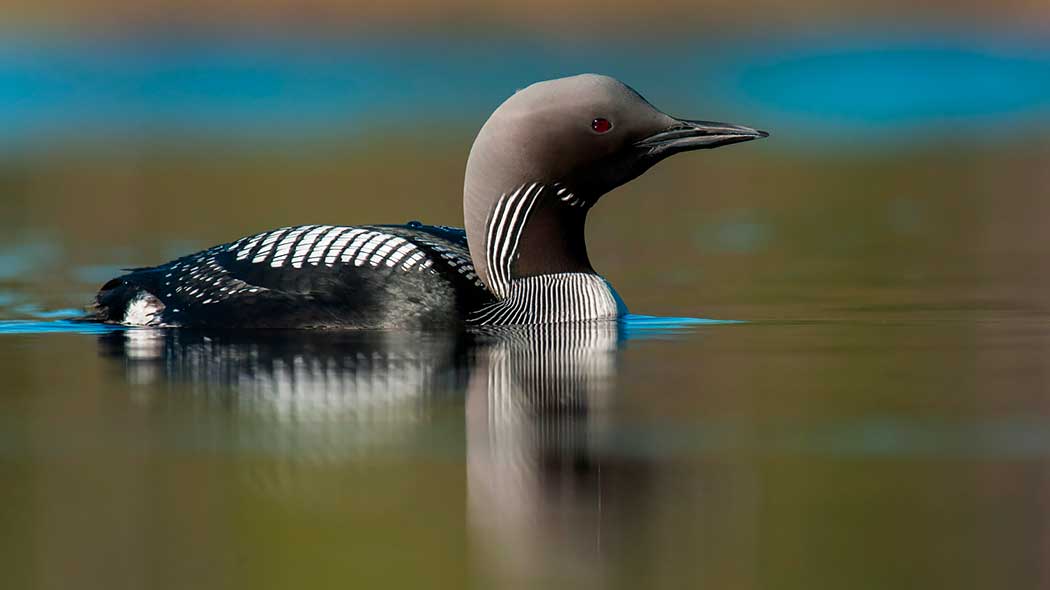 Ferns, such as long beechfern and lady fern, are among the most impressive plants in the forests of Isojärvi. They thrive in such locations as lush brooksides. You may also feel the intoxicating smell of lesser butterfly orchids when walking on a forest path at dusk. Especially in humid weather, the moss in the forests glows in dozens of shades of green. When you leave the shady lush forests and reach the cliffs on hilltops, the habitat changes completely. The pines and lichen on the summits are adapted to barren, dry and light-filled conditions. Lichen are particularly sensitive to trampling so remember to keep on the path. Small mires and bog ponds also add to the diversity of the forests in the national park. The Red-throated Diver (Gavia stellata), a bird of the wilderness, nests in the bog ponds. 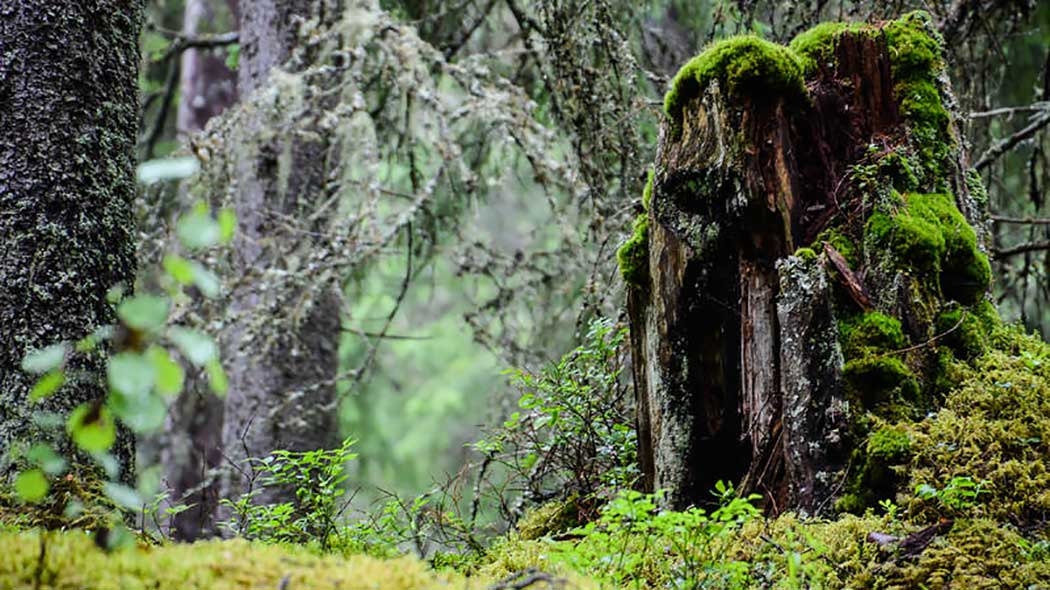 Most of the forests in Isojärvi National Park are coniferous forests that were in commercial use almost until the establishment of the protected area. There are nevertheless untouched forests in difficult-to-access areas in Kalakorpi, Vahtervuori and Hevosjärvi. These old-growth forests are inhabited by a rich variety of species and characterised by a large number of decaying tree trunks. Decaying wood is essential for many endangered polypores and invertebrates. 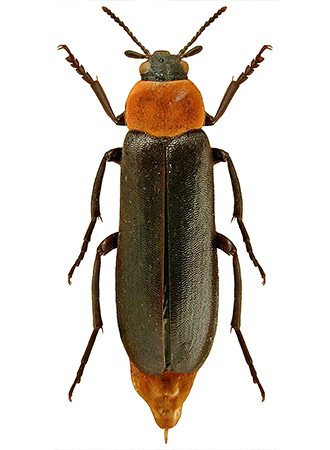 False darkling beetle (Phryganophilus ruficollis), a rare species, is one of the insects living inside decaying trees. Woodpeckers also thrive in old forests where decaying trees provide them with food and nesting places. The former commercial forests in Isojärvi are also gradually turning into natural forests. This process is accelerated by the restoration measures carried out in the national park and the North American beaver (Castor canadensis), which is producing large amounts of decaying wood.

The herb-rich Latokuusikko is perhaps the best-known of the old-growth forests in Isojärvi. The sturdy spruce trees at the site, which are nearly 30 metres tall, have already reached the end of their lives. After the spruce trees have fallen, deciduous trees such as wild lime, bird cherry and aspen growing in Latokuusikko have more living space until the day when they are once again in the shadow of spruce trees.

The waters flow east and west 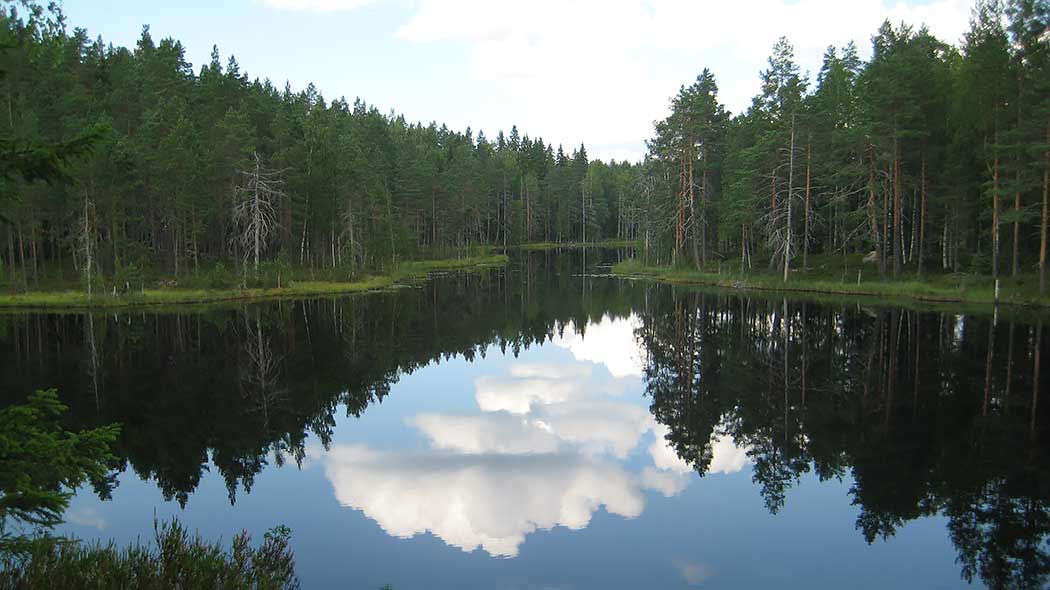 Beaver is depicted in the emblem of the Isojärvi National Park because you cannot fail to notice its traces in the area. Beavers are on the move in the evenings and at night. They are timid animals but in the national park, they are comfortable with visitors. If you wait quietly, you may even be able to see the beavers going about their business. When noticing humans, the beaver warns other beavers of the danger by slapping its broad tail on the surface of the water and dives into its lodge. 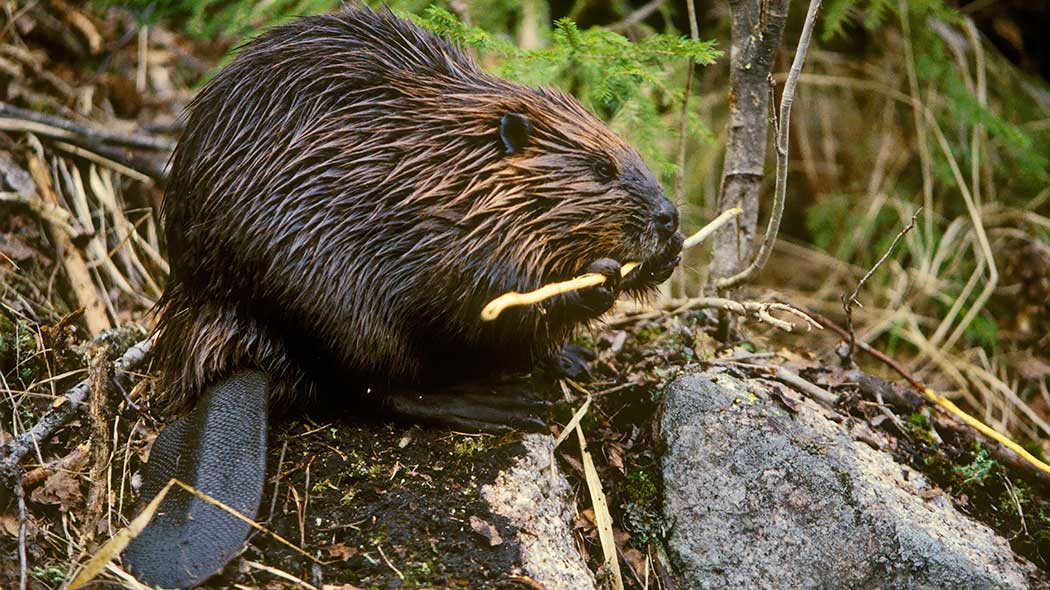 This chisel-toothed animal is known as a hard-working logger and it is able to cut trees of considerable thickness. It fells deciduous trees so that it can feed on their bark and leaves. It also likes aquatic plants and their roots. Beaver can only live in aquatic environments, which also provide it with protection, and in water it moves effortlessly. Beaver builds a dam on the outlet brook of a pond so that it can raise its water level. The rise in the water level allows the beaver to gather food over a wider area. The entrance to the lodge must also remain under water. The young are born in the lodge, built from branches and mud, between May and June. The young are safe because access to the lodge is by diving.

All around the national park, there are groups of trees killed by floods that beavers have caused. When the beaver runs out of food in its living area, it moves to another pond. The beaver returns to its first pond when it is again able to feed itself in that location. Many species benefit from a landscape shaped by the beaver. For example, hole nesters can find good nesting trees, piles of branches provide protection for young waterfowl, the number of insects increases and fish arrive to eat their larvae. In Isojärvi, hiking trails must be frequently rerouted after they have been flooded by beavers’ dams. 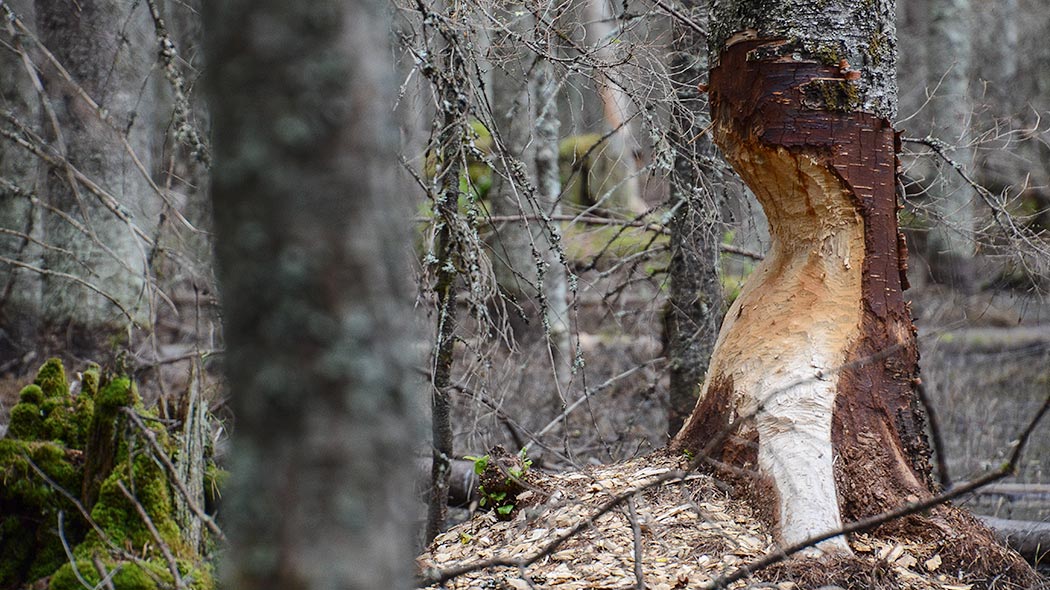 Our original beaver, the European beaver, was hunted to extinction in Finland in the mid-1800s. Its fur was a highly valued commodity and a medicine believed to have magical properties was made from castoreum, which is a secretion from the beaver’s anal gland. European beavers from Norway and North American beavers (formerly known as Canadian beavers) from Canada were brought to Finland in the 1930s. The beavers living in and around Isojärvi National Park are North American beavers. They were first observed in the park area in the late the 1980s when they settled at Lake Salmijärvi on the eastern border of the park.