Langinkoski Rapids have long fishing traditions: already in the 1790s, the monks of Valaam Monastery (located on Valaam Island at Lake Ladoga) had fishing rights to the place. As a memorial of this era, there still is an orthodox chapel at Langinkoski, where services are held during the summer. 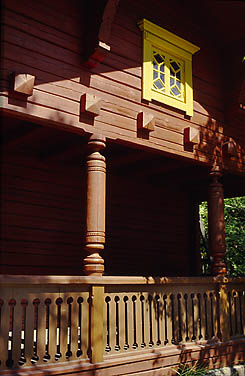 In 1880, the Russian crown prince, who later became Czar Alexander III, visited Kymenlaakso region and took a fancy to the salmon fishing place of Langinkoski Rapids, so he wanted to have a fishing lodge built on the banks of the river. It was designed by the Finnish architect Magnus Schjerfbeck, and inaugurated in 1889, when Alexander III was already in power. He only spent a few summers at Langinkoski, after which the political circumstances stopped him from having relaxed summer holidays. After Alexander III died in Crimea in 1894, his successor Nicholas II only visited the fishing lodge once. Since then, there were no more imperial visits to Langinkoski.

When Finland became independent in 1917, Langinkoski area and its buildings went to the state. After this, the fishing lodge was forgotten and fell into decay, until in 1933 the Museum Association of Kymenlaakso Region saved it and got permission to establish a museum there. The fishing lodge was renovated to its original imperial appearance. All the old furniture and textiles are still in their original place in the museum for visitors to see. Nowadays, Langinkoskiseura Association manages the museum.

In 1938, a couple of years after the museum was established, the area surrounding the fishing lodge was declared a forest park. The official government regulation on protecting the area was given in 1960. The arboretum, the area of which is 16000 sq. metres, was set up by honorary forestry counsellor V. K. Ahola in 1959. There are also trenches from two wars: the Russian made theirs in 1918 on the slopes, and the Finnish dug theirs during the Second World War in Taipalsaari.