Vallisaari and Kuninkaansaari, embraced by the sea, have served as the home and workplace of hundreds of people and as the place of military service for thousands of soldiers. These islands provide visitors with an opportunity to familiarise themselves with military history dating back hundreds of years. Vallisaari is also known as a former home base for pilots.

The Swedish reign: The period of the first fortifications and the first pilots

In the Middle Ages, Vallisaari was known by the name of Lampisaari ("Pond Island"), as seafarers replenished their drinking water supplies from the ponds in this island. An urban lifestyle was unheard of at the time; it was not until the 1550s that Helsinki was founded. It is possible that a small fortification was built on the island simultaneously with Helsinki's foundation. However, the earliest attested information on the fortifications date back to the 17th century, a period when the island acquired its present name, Vallisaari ("Embankment Island").

By the middle of the next century, the decision on the construction of a massive sea fortress off Helsinki – at the time, a hamlet of 1,500 inhabitants – was taken. Augustin Ehrensvärd, a young artillery officer, drafted the plans, with the construction beginning in 1748. On a neighbouring island, which is today known by the name of Suomenlinna, a formidable fortress was built, known at the time in Finnish as "Viapori" and referred to as the "Gibraltar of Finland".

In the 18th century, Vallisaari also became a base for pilots. The pilots lived in their cabins at the north-western tip of the island, next to the Kustaanmiekka strait, the route taken by arriving ships. The pilots and other inhabitants of the island were a headache for law enforcement. Distilling of alcohol and a tavern on the island caused the people to forget work on occasion. The inhabitants were also suspected of smuggling and serving illegal alcohol.

The Russian reign: The heyday of fortification construction

The failure to build fortifications in Vallisaari backfired in 1808, when Sweden and Russia were at war, and the Russians besieged Viapori. The Russians brought dozens of artillery pieces to Vallisaari – Vallisaari overlooked Viapori, after all, and provided an excellent field of fire. Viapori surrendered to the Russians. Sweden ceded Finland to Russia, and Finland became an Autonomous part of the Russian empire.

Vallisaari was renamed Aleksanterinsaari ("Alexander Island"), in honour of the tsar. The Russian period became the heyday of fortification construction. Viapori was an important element in the defences of St. Petersburg, the capital of imperial Russia. The Russians also began developing fortifications in Vallisaari. However, it was not until the Crimean War, which broke out in 1853 between Russian and an alliance formed by the Ottoman Empire, Britain, France, and Sardinia, that the construction gained real impetus. In Vallisaari and Kuninkaansaari, batteries, or gun emplacements, were built. 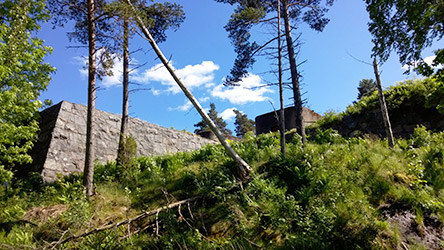 In 1854, a Franco-British naval force entered the Baltic Sea. The military build-up in Helsinki and Viapori was intensified. In August 1854, the allies sailed into Helsinki waters, bombarding Viapori.  The sea off Vallisaari was covered by smoke and fire, and Viapori sustained extensive damages.

Soon after the war, an imposing battery named the Alexander Battery was built in Vallisaari, to demonstrate Russia's military might. Changes in Russia's foreign policy and developments in military technology were soon reflected in the Alexander Battery. Originally, the battery's guns had been placed in casemates, or impact-proof, covered emplacements. However, by the early 1870s, they were moved to the top of the embankment. The casemates were built into shelters for troops and storehouses, and the brick walls were covered with thick sand embankments. 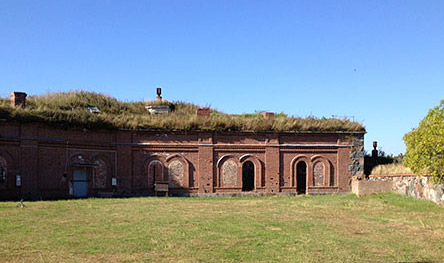 In 1906, the islands off Helsinki became a scene of events that foreshadowed the Russian revolution. The mutineers took over Vallisaari and Kuninkaansaari. The mutineers shelled Viapori from Kuninkaansaari, with success. However, despite their original winning position, the explosion of the gun powder supply in Kuninkaansaari and shelling by the Russian navy tipped the scales against the mutineers, causing panic among them and their ultimate defeat. Dozens of lives were lost in this conflict, some of them in executions following the fighting.

For the pilots in Vallisaari, a new Luotsitalo pilot house was completed by 1878, and the pilots were ordered to relocate to the building.  In 1910, Hylkysaari island was designated as a new base for the pilots, but, due to a lack of premises, some of them still remained in Vallisaari. The last pilots left the island as late as in the early 1920s. 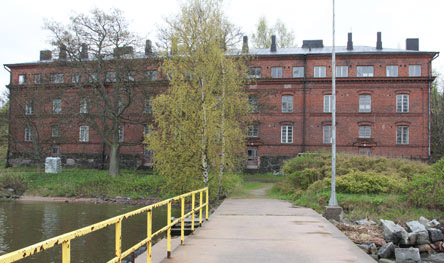 In the years preceding WWI, the batteries in Vallisaari were modernised with concrete constructions, and a gunpowder magazine was built in the middle of the island. During the world war, a brick barracks for officers was built, in addition to a number of storage buildings. However, Vallisaari and Kuninkaansaari began to lose their importance in Russian maritime defence. The focus of the defences was moved out to sea. The Russians began to build fortifications in the outer archipelago of Helsinki, including the islands of Isosaari, Kuivasaari, Harmaja, and Rysäkari.

The period of independent Finland: The Finnish Army takes over the islands; a period of quiet and peace

The history of the two islands as a military area continued after Finland became independent in 1917. Weaponry of the Finnish Defence Forces was stored in Vallisaari and Kuninkaansaari until fairly recently. In Vallisaari, ordnance, torpedoes, and mines were loaded and maintained; weather observations were made; and gas masks were repaired. In Kuninkaansaari, a coastguard station was in operation. During WWII, a German-made air surveillance radar, referred to as "Raija" in Finnish military jargon, was placed on the island.

A destructive explosives accident occurred in Kuolemanlaakso (‘Valley of Death') in Vallisaari on 9 July 1937. Thousands of kilos of explosives were flung across Vallisaari and all the way to Suomenlinna. Despite the fact that the inhabitants were fleeing for their lives, eight lives were immediately lost, and so were four more later at hospital. Furthermore, the commander of the Ordnance Department of the Ministry of Defence, Colonel (Engineers) Aleksanteri Huuri, was so shattered that he died a week later. The reason for the explosion is unknown. Speculation focused on the careless handling of explosives, but sabotage was not ruled out.

In addition to the functions of the Finnish Defence Force, a residential area with a distinctive identity of its own emerged in Vallisaari, with its residents being principally civilians employed by the state of Finland. The island was at its liveliest in the 1950s, when more than 300 people lived there. Although Vallisaari is located close to Helsinki city centre, the islanders led a rural life. People tended their vegetable gardens on the island, in addition to which a whole range of grazing animals was found: rabbits, sheep, horses, and pigs.

In the early 1950s, a school, a shop, and a youth club were active in Vallisaari, in addition to a choir, a drama club, and a troop of scouts. For children, Vallisaari was a secret world where small islanders experienced numerous adventures, sometimes without the knowledge of the adults. Children threw stones at windows, searched for the mouth of a tunnel that, according to rumours, led to Suomenlinna, and dug up explosives, even though this was strictly forbidden then and is now. People swam in the pond, jumped from a diving tower, sunbathed, did their laundry, and pumped washing water. The last inhabitants left the island in 1996.

The islands have slumbered for the past decades, remaining almost in a perfect natural state. The Finnish Defence Forces announced that they would give up the islands in 2008. In 2013, Metsähallitus Parks & Wildlife Finland started a project to prepare the opening of the islands to visitors. This unique nature tourism destination was opened in 2016. The work will continue: the buildings and caves are waiting for users, and the services and safety are being improved.