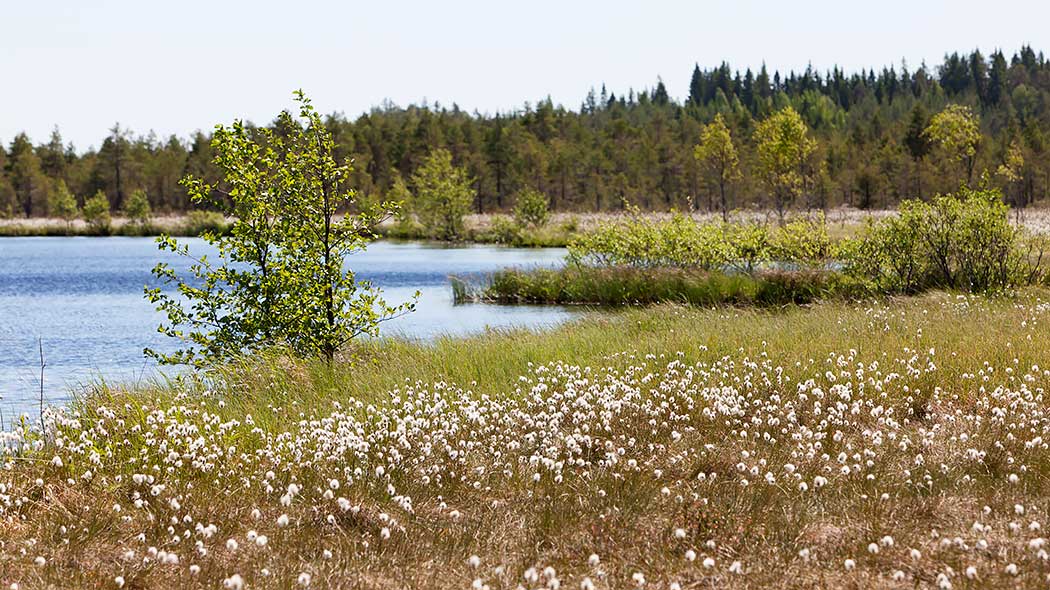 In the Kurjenrahka National Park, the magic of the mire is reflected in the sway of the cotton grass (Eriophorum angustifolium) and colourful variations of the peat moss (Sphagnum). Large numbers of insects offer a feast for many birds in the area. 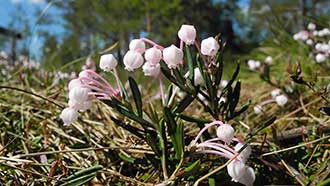 From the peats to the ponds

In the olden days the swampy areas of the mire were called the peats. There are also ponds in the mire where birds nest, safe from predators.
Read more > 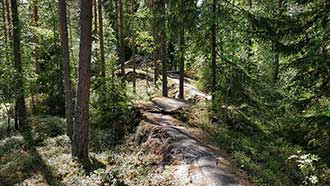 The Pukkipalo forest has been spared from logging and has remained in its natural state. Bracket fungi like Amylocystis lapponica tells a story of a healthy environment. Read more > 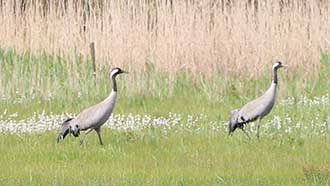 The home mire of the cranes

Kurjenrahka National Park’s regional emblem is the crane (Gruidae). Here you can also hear the hooting of a boreal owl (Aegolius funereus) or spot a black grouse (Lyrurus tetrix) at the edge of the mire. Read more > 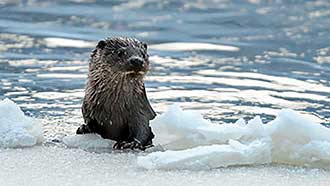 Only traces can be seen of animals that prefer twilight 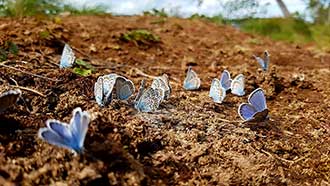 The insect world is abundant at Kurjenrahka. On the board-walks you might see the flutter of blue wings. Mischievous little lizards also catch insects for food. Read more >

Making a home is hard work so let’s give the birds some nesting peace! Access is restricted in the four no-go areas (julkaisut.metsa.fi). Open > 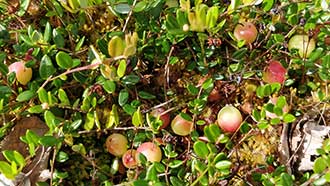 When mires are restored, the results are clean water, good berry crops and great nesting places for birds. With the help of the Hydrology LIFE project, 100 acres of the Vajosuo mire are maintained (www.metsa.fi). Open > 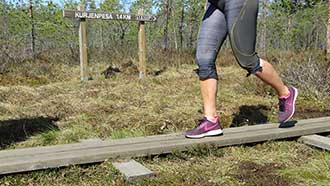 Nature conservation and nature tourism go hand in hand. We preserve the most valuable nature locations by guiding visitors to use the trails. Read more > 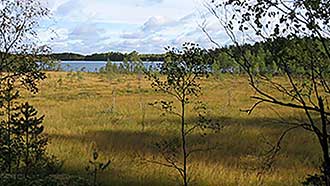 Enjoy the peace of nature in a wilderness oasis. According to the rules, in the Strict Nature Reserve you can only go on trails. Read more >

Kurjenrahka National Park includes the largest mires of Southwest Finland which are in their natural state, and the surrounding forests, of which some are old. The soil in the National Park is low in nutrients, which can be seen in the natural features of the area: the forests are mostly dry, and the mires are barren raised bogs, where the centre is higher than the edges, so nutritious water from the surrounding areas cannot run there. The plants of the raised bogs live only on the nutrients they get from the rain water. 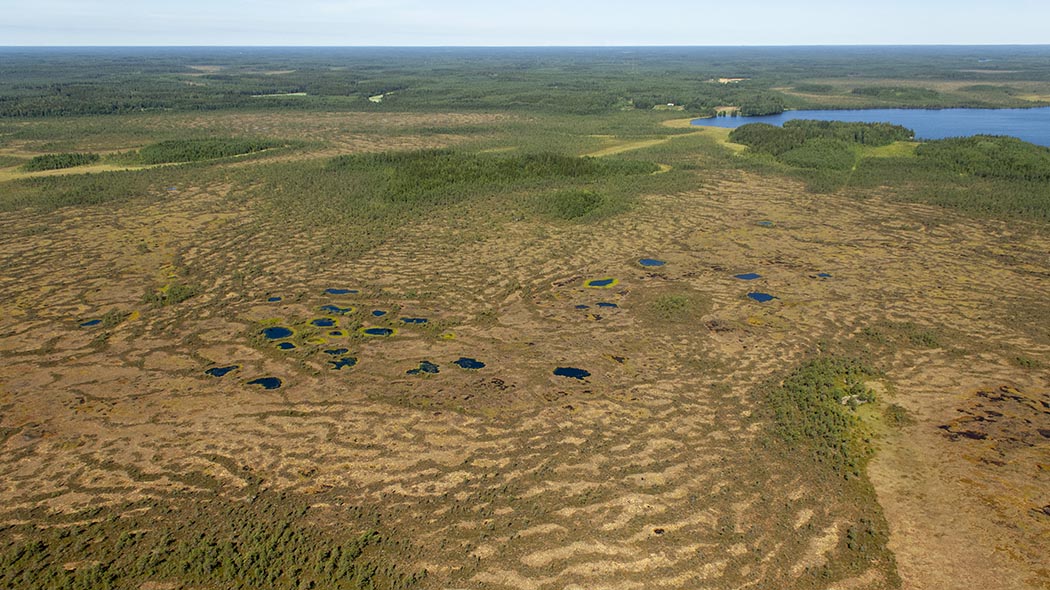 Geographically Kurjenrahka National Park can be divided into three parts:

From the peats to the ponds

The Mires in Kurjenrahka are unique to Southwest Finland in their size and diversity. Although some areas round the edges of the mires have been drained before now, most of the mire is still undisturbed. In addition, many of the ditches have become blocked, and the original vegetation of the mire is growing back.

This process can be speeded up by mire habitat restoration works (metsa.fi), such as blocking the ditches and felling the trees which have grown because of the mire drying. 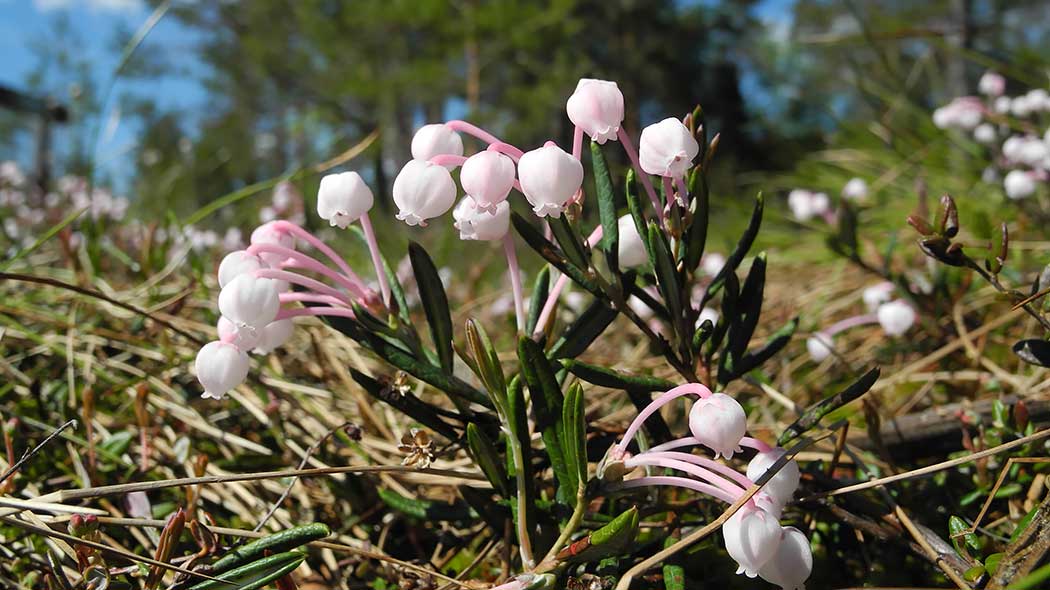 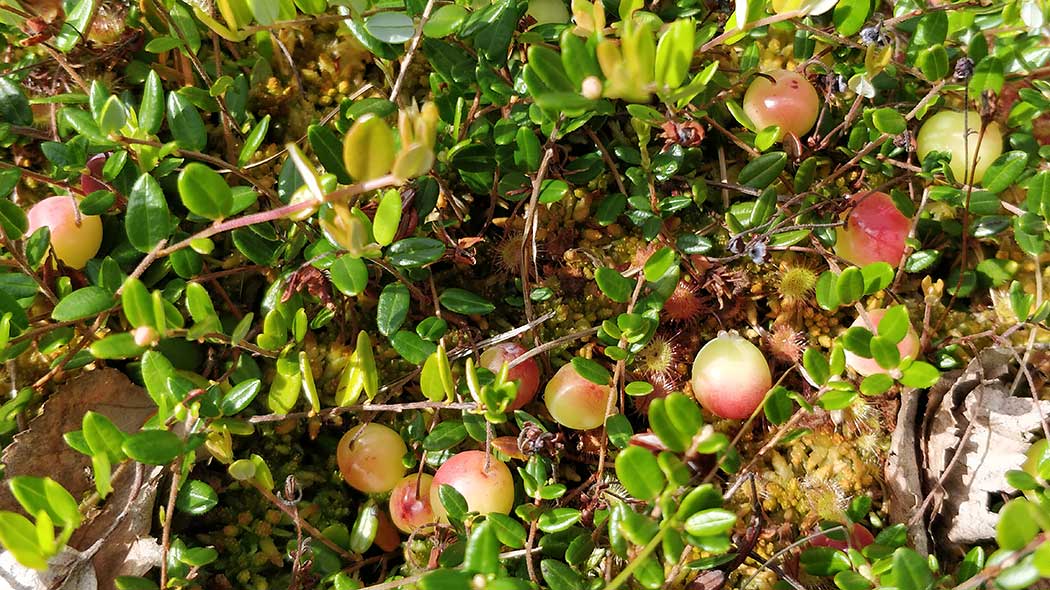 Kurjenrahka, Lammenrahka and Vajosuo are raised bogs, where hummocks (higher and dryer places) are winding between wet hollows. On the hummocks grow the Marsh tea (Ledum palustre) and sparse tortuous pines (Pinus sylvestris). The hollows between them are at some places deceitfully soft and wet, real bogholes. "Rahka" in the names of the mires originates from the Finnish word for Sphagnum moss (Sphagnum sp), which is typical for these mires.

Kurjenrahka Mire, which the National park is named after, is with its area of more than 20 sq.km. one of the largest unbroken mires in the whole of Southern Finland. It is a raised bog divided by forested islands, and its wettest part, so called "puddle part", is the northern and western side of it. The puddles are small ponds on the mire, where many birds live. Because it is not easy for predators to get there, it is a safe place for the birds to build their nests.

Lammenrahka Mire, next to Lake Savojärvi, is a typical Southwestern raised bog, where dry hummocks and wet hollows circle the centre of the mire. At some places it is more luxuriant than Kurjenrahka Mire, and it also has many small ponds with clear water. On Lammenrahka Mire live probably more birds than anywhere else in the National Park. Separate Vajosuo Mire is a smaller raised bog, where the centre is flat with few trees, and on the edges there is a pine bog zone.

Laidassuo and Lakjärvenrahka, located in the western part of the park, are completely different from the large Kurjenrahka and Lammenrahka areas. Here the mires have formed between large, rocky forests, usually as elongated chains.

The area of Laidassuo and Lakjärvenrahka Mires for most part resembles a labyrinth, at some places it seems wilderness-like. In between the mires, there are forested islands, some of them in their natural state, such as Pukkipalo old-growth forest area.

The forests of the National Park grow round the edges of mires, or in forested islands in the middle of mires. Most part of the forests have been used for commercial forestry. However, there are many islands in the mires where the forests have been saved from logging for a long time, and they appear as if they were in their natural state: there are trees of different age, especially stout old trees, a lot of decayed wood, and many different tree species. Pukkipalo old-growth forest in the eastern corner of Laidassuo and Lakjärvenrahka mires is a good example of that. 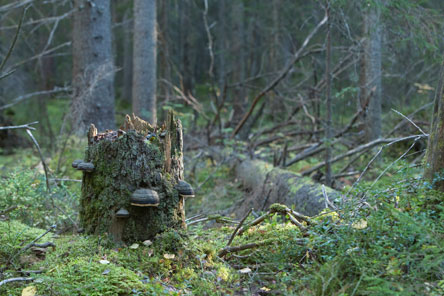 Pukkipalo has the most handsome old-growth forests of the region. There are old spruces, dead standing barkless trees, and old decayed wood on the ground. In places which are higher than their surroundings, old pines with their shield bark grow as if they were guarding the peace of the area.

In the old-growth forests live the hole-nesting birds, many insects and fungi. The set of decay fungi species of Pukkipalo is impressive; the threatened species like Fomitopsis rosea and Amylocystis lapponica show, that there has continuously been a lot of decayed wood, which is rare in Southern Finland.

Even though the animals living in the National Park are mostly typical for mire areas, there also live many rare and threatened species of wilderness. Some of them are far away from their main distribution areas, for example for many northern bird species this is their southernmost nesting area.

The nesting birds of the National Park include many species which are rare or threatened in Southwest Finland, such as the Northern Hobby (Falco subbuteo), the Common Kestrel (Falco tinnunculus), the European Nightjar (Caprimulgus europeaus), the Grey headed Woodpecker (Picus canus), the Wood Lark (Lullula arborea) and the Red-breasted Flycatcher (Ficedula parva). A lucky passer-by can also see the Peregrine Falcon (Falco peregrinus) on top of a pine tree on a mire, or flying up in the sky. Kurjenrahka is probably one of the southernmost places in Finland, where the Willow Grouse (Lagopus lagopus) nests. In addition, the southernmost Rustic Buntings (Emberiza rustica) in Finland can be seen on the pine bogs and in the willow thickets around the mires.

In the old-growth forests on the edges of the mires, and on the forested islands, nest the Common Raven (Corvus corax), the Tengmalm's Owl (Aegolius funereus), the Ural Owl (Strix uralensis), the Black Woodpecker (Dryocopus martius), the Three-toed Woodpecker (Picoides tridactylus), the Black Grouse (Tetrao tetrix) and the Western Capercaillie (Tetrao urogallus). In the spring and autumn, many migrating birds stop on the mires of the National Park. For example the Bean Goose (Anser fabalis) and the Common Crane (Grus grus) rest in the area.

The crane - a majestic migratory bird

In the early spring in the mire, the air is full of expectation when every step brings up the subtle scent of the marsh Labrador tea (Rhododendron tomentosum). The air is crisp and cold and the silence is only broken by a distant, primitive trumpet call. The cranes have arrived at their breeding grounds in their V formations. Despite their large size, they gracefully step around in the misty morning clearings. 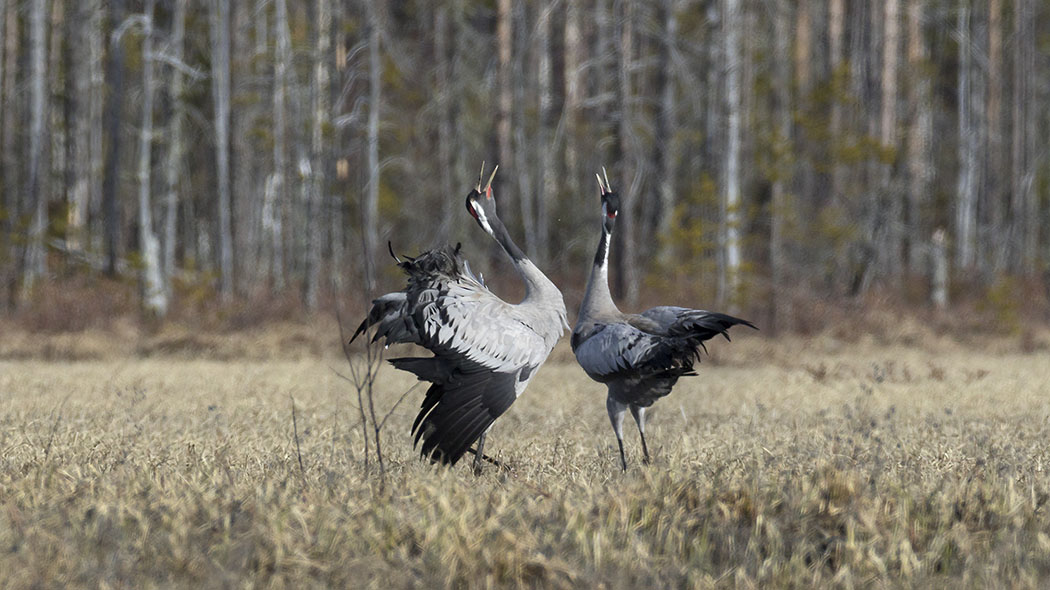 The sound scape is momentarily filled with the cranes calls and cries as they arch their necks: Their call kruu, kruu sounds like a name and that is where their scientific name (Grus grus) was initially derived*. Their cries carry far, reminding those who hear them of ancient times, and take their thoughts to wilderness and untouched nature. It’s no wonder that there are many old beliefs and myths related to cranes.
It is always thrilling to hear and see a proudly stepping crane. The cranes remind us about the age-old cycle of the seasons and their appearance is always eagerly awaited.  In the spring, accompanied by southern winds, they fly high and loudly announce their arrival, which promises an end to the winter and the approach of summer. After the summer, they gather into big flocks for the migration and we know the winter will be around the corner. When the wind starts to blow from the north, they bid us farewell and begin their journey in huge V formations towards their Southern European and North African wintering areas.

The cranes reinforce their lifelong partnerships with dance rituals and songs. Their nesting places are usually found near secluded swamps or waterside meadows, far away from predators and people. They construct their nests by piling up bits of plants. Each year, nine to fourteen crane couples nest at the Kurjenrahka National Park, but during migratory periods hundreds of cranes can have a rest there. A pair will get one or two chicks at a time, and despite the large size of the mother it is surprisingly hard to spot the families during the summer. With their grey tones they blend in amazingly well into the surrounding vegetation and they move low and silently. An ordinary hiker won’t usually notice a family of cranes until late summer when the chicks are already big and dare to be more visible.

The population of cranes in Finland is thriving, but the number of suitable nesting areas has decreased due to dredging, peat production and afforestation. Other types of wetlands have also suffered. Metsähallitus’s work of restoring the mires by, for example, filling ditches is vital for preserving our diverse species. Kurjenrahka is the biggest southern breeding mire in Finland and the crane is a wonderful regional emblem for our National Park.

Already in 4500 - 2500 BCE, *Grus meant the name of a crane in the Indo-European language and referred to their loud calls. Carl von Linné who later officially named the species picked up the word from ancient Greece.

In the old-growth forests live several rare beetle species, which depend on decaying wood. Especially Pukkipalo old-growth forest has a diverse set of beetle species. The threatened species of the area include Aradus betulinus, Aradus pictus and Calitys scabra. There are also rare and threatened moths such as Straw Belle (Aspitates gilvaria), and butterflies such as the Freija's Fritillary (Clossiana freija). 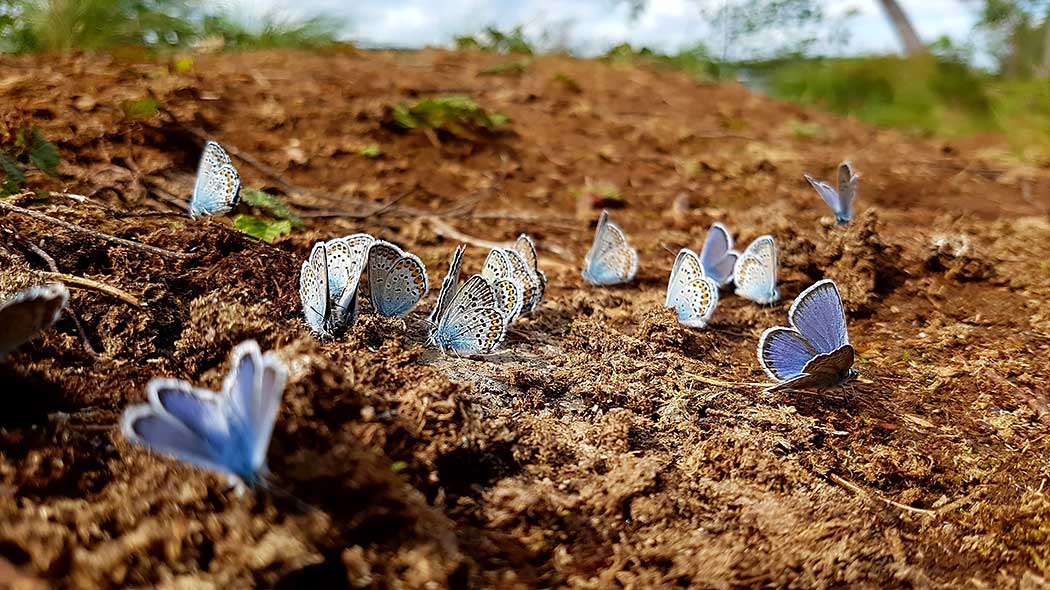 Only traces can be seen of animals that prefer twilight

The Siberian Flying Squirrels (Pteromys volans) of the National Park live quietly in the old mixed-wood forests round the mires. They eat leaves, bark and pollen of the old deciduous trees, and hide in the spruces. The worst enemy of the Flying Squirrel in the National Park is the Pine Marten (Martes martes), but also the Northern Goshawk (Accipiter gentilis) and the Ural Owl (Strix uralensis) can be dangerous.

Lake Savojärvi, north of Kurjenrahka mire, is the territory of an Otter (Lutra lutra) couple. In the night, the Otter regularly goes on a foray from the Lake Mynäjärvi nearby to Lake Savojärvi and up to the head waters of Järvijoki River. 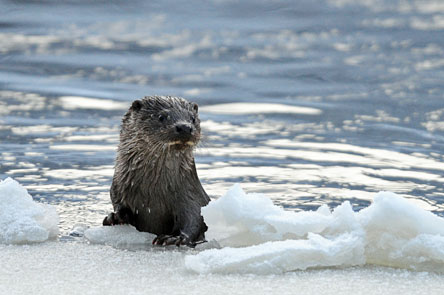