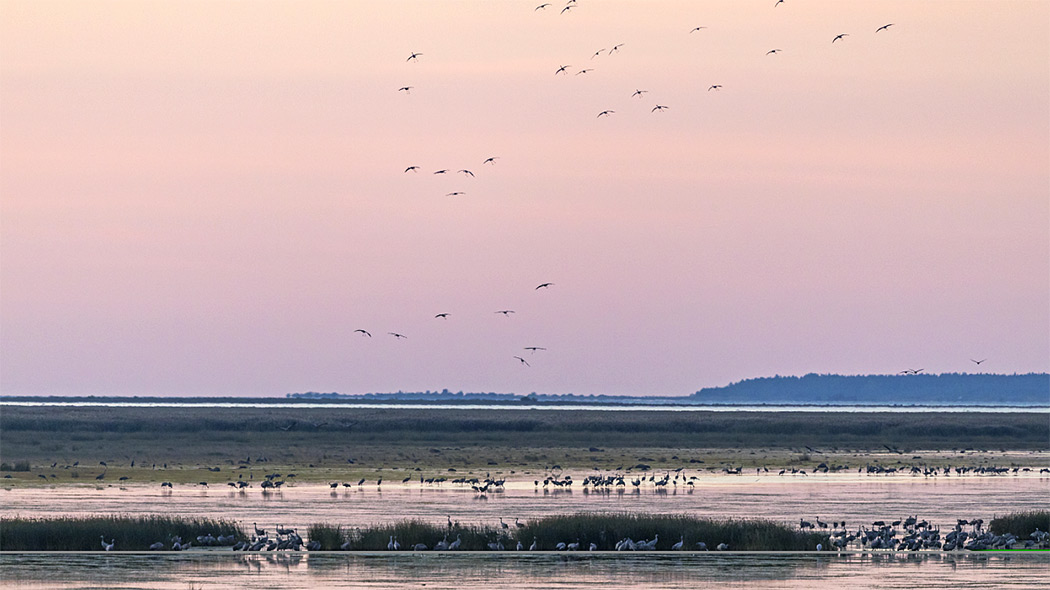 Liminka Bay is one of Europe’s most important bird wetlands. Tens of thousands of birds stop to rest, feed and nest in this area shaped by land uplift. 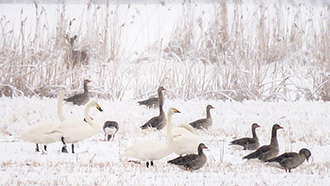 Spring and autumn arrive at Liminka Bay accompanied by flocks of birds. Some continue their journey while others stay and nest in the wetland. Read more > 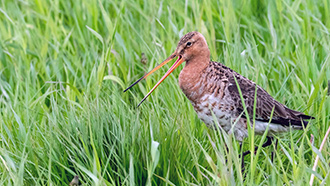 This rare and endangered bird has found a home at Liminka Bay. Nearly 200 pairs nest here every year.
Read more > 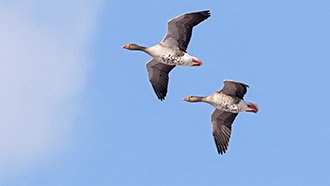 A flock of greylag geese fills the wetland

Greylag geese mate for life. Liminka Bay is the most important reproduction area for greylag geese in Finland. Read more > 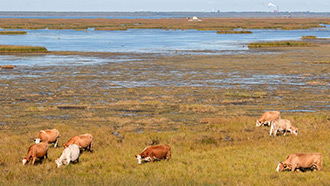 Cows and sheep keep vegetation on the shoreline low. The seashore meadows are very important nesting sites for waders and ducks. Read more > 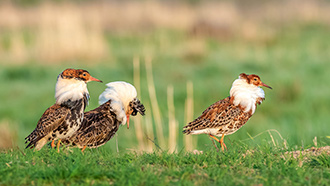 The mating dance of the ruffs is an impressive display. Starting in May and continuing well into the summer, you can photograph the males’ colourful behaviour from a hide. Read more > 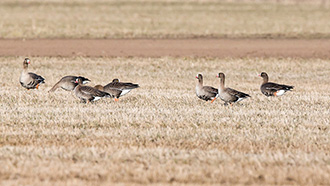 The Oulu region is one of the only places where you can see the endangered lesser white-fronted goose. They migrate in early May. Read more > 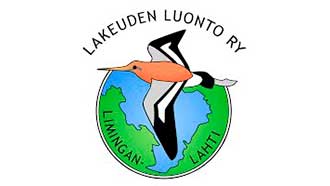 Liminka Bay is one of the most significant wetlands in Europe. The area belongs to the international network of Ramsar wetland areas. The land uplift caused by the Ice Age has shaped the shore habitats of Liminka Bay, and they are home to a wide variety of species. Read also The Birds' Year.

Liminka Bay is an internationally significant resting and nesting site for migratory birds. The area is a meeting place for many northern and southern bird and plant species. More than 160 bird species nest in the Liminka Bay area, and over the year, more than 200 species are sighted in the area. Amongst the important nesting species are the greylag goose, the black-tailed godwit and the western marsh harrier, and amongst the most visible migratory birds are the whooper swan, the bean goose, the common crane and the ruff. A total of 289 bird species have been sighted by 2014.

The area of Liminka Bay is more than 12,000 hectares, approximately the same as that of the City of Hanko.  The walking distance around the bay along the shore is 110 km. The average depth of the bay is 2.5 m, and half of the bay is less than one metre deep. At Liminka Bay, there are 12 small islands and two small gloe ponds, entitled Kuppi and Pajulampi. The gloe ponds have been separated from the sea, due to land uplift.

The Rivers Temmesjoki and Liminganjoki empty their waters into Liminka Bay from the southeast and River Lumijoki from the west. The bay's coastline is more than 110 km long, from Riutunkari (in Oulunsalo) to Varjakka (in Lumijoki).

The Oulu region is an important gathering area for birds, both in the spring and autumn. The extensive grain fields serve as a larder and Liminka Bay as a night stop. Due to their low elevation, the Liminka Bay wetlands are an ideal feeding ground for waterfowl and waders. The grazed coastal meadows are teeming with insect life in the summer. Finland's rich fauna and light summer nights are, indeed, the primary reason that birds make the arduous journey north to nest. 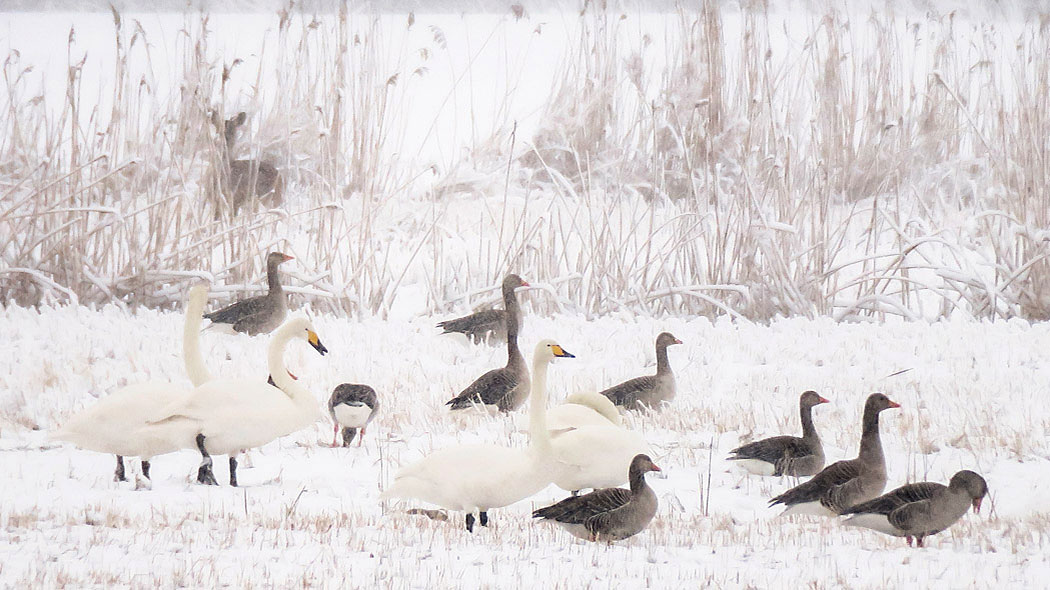 Birds typically fly hundreds of kilometres a day on their migration. There are even some species which can cover thousands of kilometres in a day. Flying takes a lot of energy. Birds stop to refuel so that they can continue to their nesting sites or, in the autumn, to their wintering grounds.

At Liminka Bay, the spring migration starts at the end of March. Swans, cranes and geese spend their winters closer to Finland, so they arrive earlier in the season. The large birds are mainly day migrants. They follow along the larger bodies of water, and the Bothnian coast is one of their main migratory routes.

Wading birds arrive when the shorelines are free of ice and wetland insects can be snapped up from the mud. Ducks and other waterfowl feed on aquatic insects, parts of plants or small fish when the water is free of ice. Insectivores arrive when it is finally warm enough in Finland for insects to hatch. Smaller birds or longer migrations require more frequent feeding stops.  Flying long distances also puts a strain on wing and tail feathers. After migrating, birds need a lot of food so that they will have enough energy for nesting and moulting. 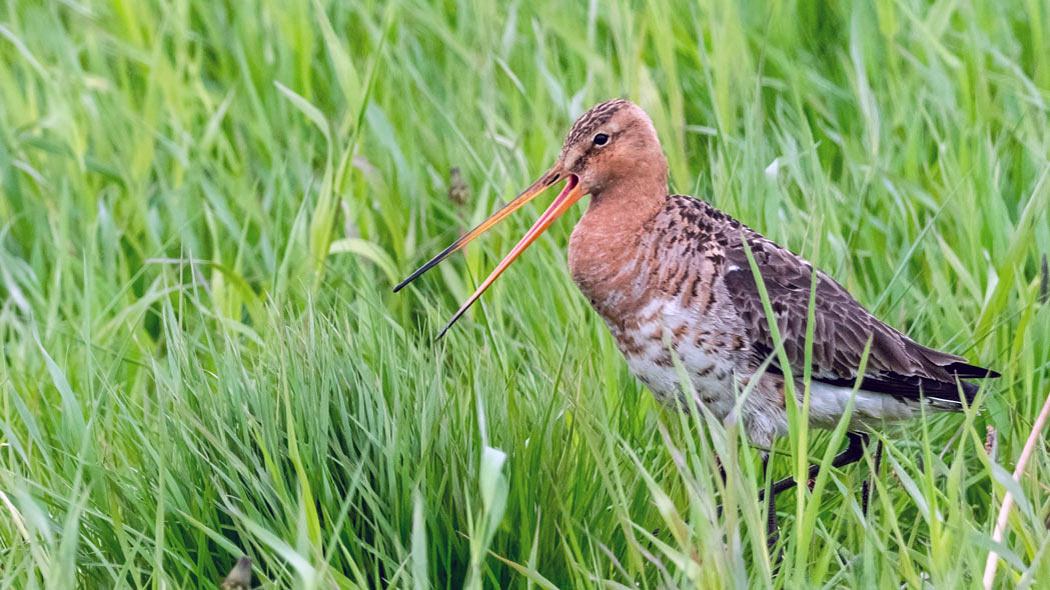 The godwit, with its distinctive appearance and call, arrives at Liminka Bay at the end of April. The black-tailed godwit is a large wader, with extremely long legs and beak as well as a colourful coat. Pale wing stripes and a black-tipped tail can be easily spotted when the birds fly. Their courtship flight is magnificent to behold - the bird rises high, swerving in the air, and then nosedives toward the ground. Right before crashing into the earth, it rights itself and lands gently on its feet.

The godwit is a noisy bird that will fearlessly defend its nest and chicks. Both partners incubate and take care of the chicks.  Godwits nest in coastal meadows and dry fields in the Oulu region. Nests in coastal meadows are disposed to be destroyed by high water. Individuals unable to nest head south already in July. The main populations migrate to West Africa in August.

The first Greylag geese (Anser anser) arrive in Liminka Bay at the end of March. Liminka Bay is the most important breeding ground for greylag geese in Finland, with over 200 nesting pairs established in the area. The geese begin nesting in April and make their autumn migration before hunting season begins. An increase in reed nesting grounds has helped the geese population grow. The first chicks hatch at the end of May. 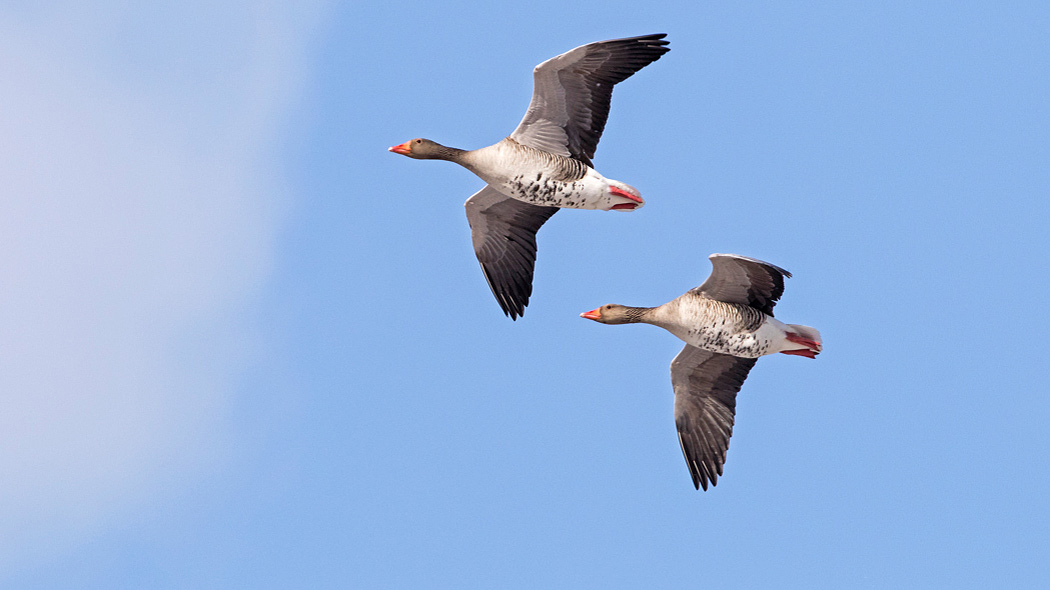 In addition to nesting greylag geese, hundreds of young geese without nests also spend their summer by the bay. As with other waterfowl, greylag geese are not able to fly in the summer because they lose all their wing feathers at once. Moulting lasts roughly a one month, and the geese are hiding during this time.

In August greylag geese gather in migratory flocks, with some containing even thousands of birds. Some greylag geese head back to the warm temperatures of Spain before bird hunting season begins, but the last individuals take to the skies in September. Older birds migrate together with their young. Adults show their offspring where the best rest stops are.

The reason that many plant and bird species are endangered is, that mowing and grazing are no longer practised. Coastal meadows are overgrown, and the eutrophication of waters has resulted in reed beds closing off open shorelines. The decline of many endangered species has been stopped by reintroducing grazing to shoreline biotopes. 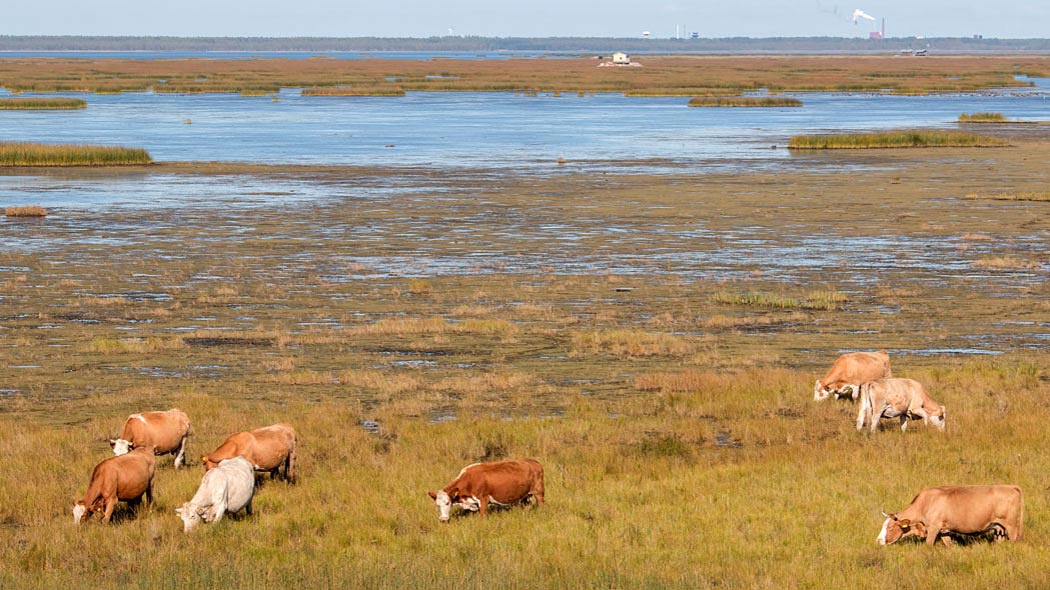 Liminka Bay's 1400 hectares of pasture is one of Finland's largest such areas. Extensive pastures for cows and sheep have been established, for example, along the shores of Pitkänokka at Lumijoki and Virkkula at Liminka. If these 'summer workers' were not grazing the shorelines, an impenetrable thicket of reeds and willows would grow there. Although the habitats that reed beds provide are necessary, the biodiversity thrives especially on seashore meadows.

Low coastal meadows offer the best possible habitat for a large part of the bird and plant species. The Bothnian coast is home to numerous arctic coastal plants, which spread to Finland at the end of the last Ice Age. Perhaps the most beautiful of these is the Siberian primrose (Primula nutans). Its pale pink and violet flowers blossom around Midsummer. These plants are currently only found in maintained coastal meadows and it is protected - they are not to be picked or tread upon.

The southern dunlin (Calidris alpina schinzii) is a small wader that is listed as endangered. The species has seen a decline due to overgrown seashore areas and eutrophication, so grazing promotes also protection of the southern dunlin. Oulu region is home to the largest population of southern dunlin in Finland. The large black-tailed godwit--a speciality of Liminka Bay--also thrives on pastureland. 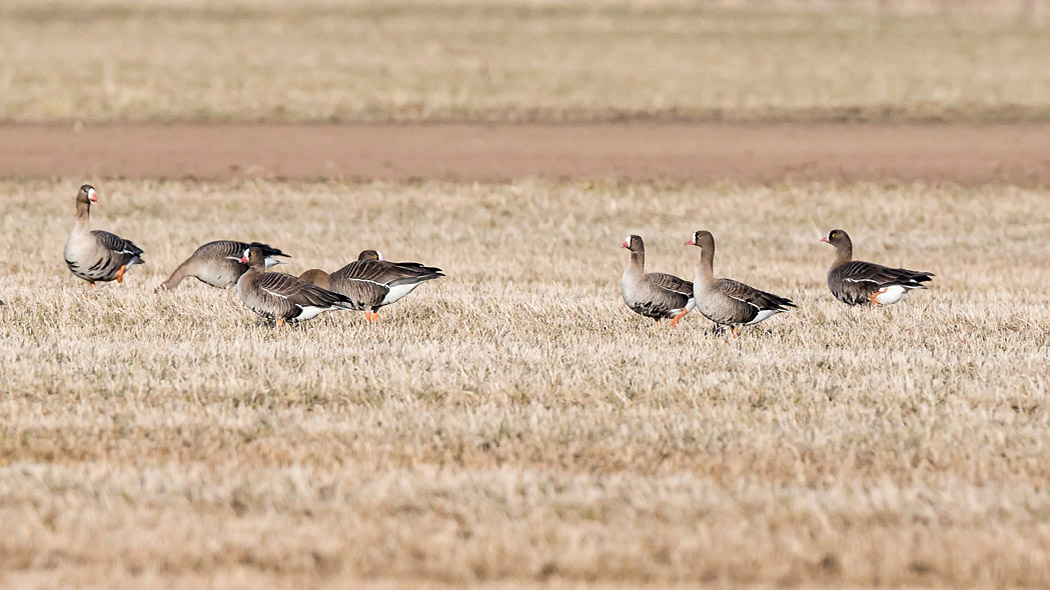 The main cause of the worldwide decline in lesser white-fronted geese populations is hunting. In order to target protection, it would be critical to locate the migratory rest stops and wintering grounds. Invaluable data has been obtained by means of satellite tracking, which is used to study the movements and habitats of lesser white-fronted geese.

A majority of the lesser white-fronted geese in the Nordic countries congregate in the Porsang Fjord in northern Norway. It was previously thought, that lesser white-fronted geese bypassed Finland through Russia. In the autumn of 2018, a male lesser white-fronted goose (dubbed 'Blue'), fitted with a satellite transponder, surprised researchers by taking a shortcut through Finland and heading to Northern Greece. Following the straightest possible route, the goose family covered approximately 3,000 kilometres in roughly three days.  The reason for the abnormal migratory route is unknown. Perhaps Mr. Blue noticed that he could get to his wintering grounds even faster.

Ruff males (Calidris pugnax) are unique members of the bird realm. No other species has as much colour variation between individuals. The collars and head tufts of the male range in colour from white to black, russet to grey. Colour plays a key role in the mating game. In addition to males with colourful neck ruffs, there are also males which mimic females in appearance and behaviour. The nearly silent courtship, or lek is an impressive natural display. 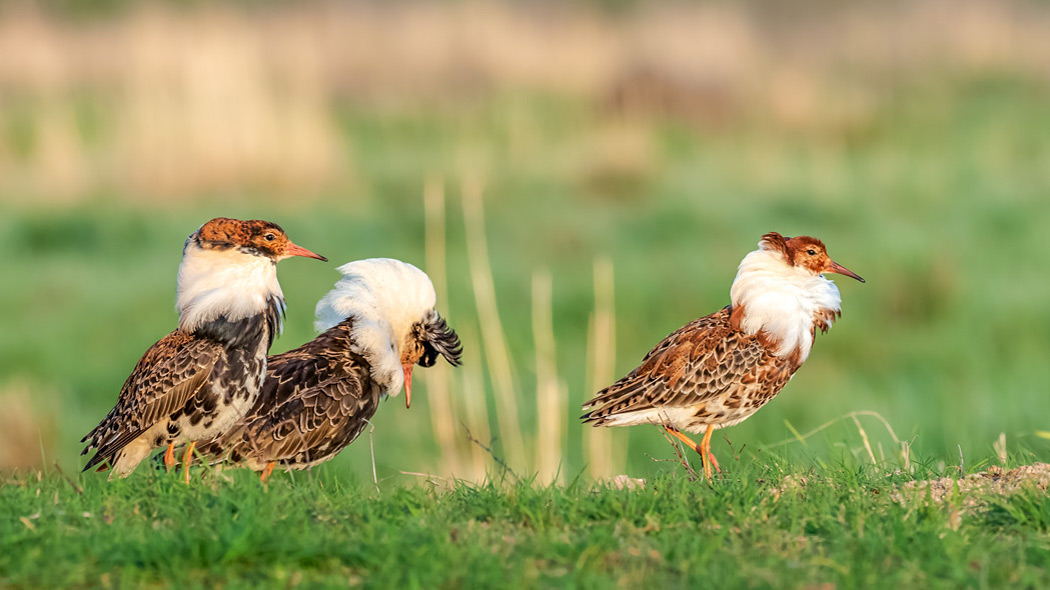 A popular lek arena can involve as many as several dozen males. Strong males, typically with a dark coloured ruff, maintain small territories close to each other. While staking out their territory, the males fan out their ruffs and head tufts to attract females for mating. Fights between dominant males are intense, with individuals striking each other with their wings, kicking and pecking. Males with a white ruff or female-like males do not maintain their own territory, instead moving freely between leks. Males without territories do get to mate in secret, when the dominant males are busy fighting each other.

The ruff population has decreased by 85% since the 1980s. The nesting population in Finland is 5,000-8,000 pairs. This decline is due to changes in agriculture and draining of nesting and feeding grounds. Ruffs winter in West Africa, where they are also hunted. In Finland, the ruff is listed as Vulnerable. The Oulu region is the southernmost range of the ruff. The number of ruffs has also dropped alarmingly in Liminka Bay, with only around 100 nesting pairs.