The History of Leivonmäki National Park 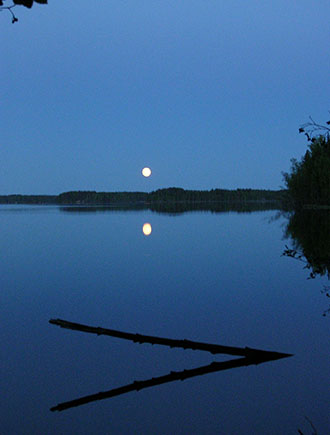 Leivonmäki was inhabited already in the prehistoric times: there are two Stone Age settlements near the shore of Lake Rutajärvi , and a Bronze Age settlement in Harjulahti , nearby the National Park. Hunting, fishing and gathering were the sources of livelihood. Later the people of Savo and Häme regions fought over the hunting and fishing rights in the area. First written record of the a permanent inhabitant of Leivonmäki was made in 1544. At the same time new settlers from Savo arrived from the east. The permanent inhabitants' means of livelihood included slash-and-burn agriculture in addition to hunting and fishing. There were 15 inhabitants in 1550 in Leivonmäki, 30 inhabitants in 1570, and 60 inhabitants in 1590 and in 1610.

For a long period, it was typical for the inhabitants in Central Finland to have lots of space around the settlements, because they mostly practiced slash-and-burn agriculture which required large areas of land. Until the 1700s, there was enough space for also the new settlers. In the end of 1700s and the beginning of 1800s, the general parcelling out of land was carried out in Finland, which prepared the way for more permanent field agriculture.

After the second world war, Kivisuo Mire was drained to produce fuel peat. Peat production ended already in 1954, but by then it had brought along developments such as the road, electricity and telephone. New houses were built in Kivisuo and Selänpohja for the workers. Now the buildings of Selänpohja are in long-term residential use.

The Most Valuable Areas Are Protected

The idea of establishing a national park in Leivonmäki was first brought up already in the 1976, to preserve the diverse and wilderness-like landscape of Leivonmäki for the future generations. More than a decade passed before the core areas of the present National Park were protected in 1991 by establishing Haapasuo-Syysniemi Nature Reserve. The National Park was established 1.3.2003, 27 years after it was suggested for the first time.

The Water Level in Lake Rutajärvi is Lowered

In a parish meeting in 1818, it was proposed that Rutakoski rapids should be cleared, so that they would be deeper and wider and that the "huge mass of water above the villages of Leivonmäki and Havumäki would go down". Lake Rutajärvi Canal was built in 1853 - 1859 and the water level dropped by 2 metres.

From the record of the 1892 municipality meeting:

"It was decided to appeal to the crown in deep subservience
that the lowering of Lake Rutajärvi would be carried out as relief work
so the poor people would get income during the hard times and
that with the allocated state money the work could continue over the winter.
The left-over funds would be used for draining the surrounding large mires."

So the water level in the lake was lowered for the second time, to get rid of the damages that floods were causing on the fields. After clearing the canal, which was carried out in 1890-1894, the water level had dropped about 4 metres.

Most of the almost two hundred islands and islets were created when the water level dropped. The rocky belt circulating the sides of the lake reminds us of the times when the waves were washing the shores a couple of metres higher. The old shoreline and square-shaped stony boundary marks can be clearly seen also along the trails of the National Park. 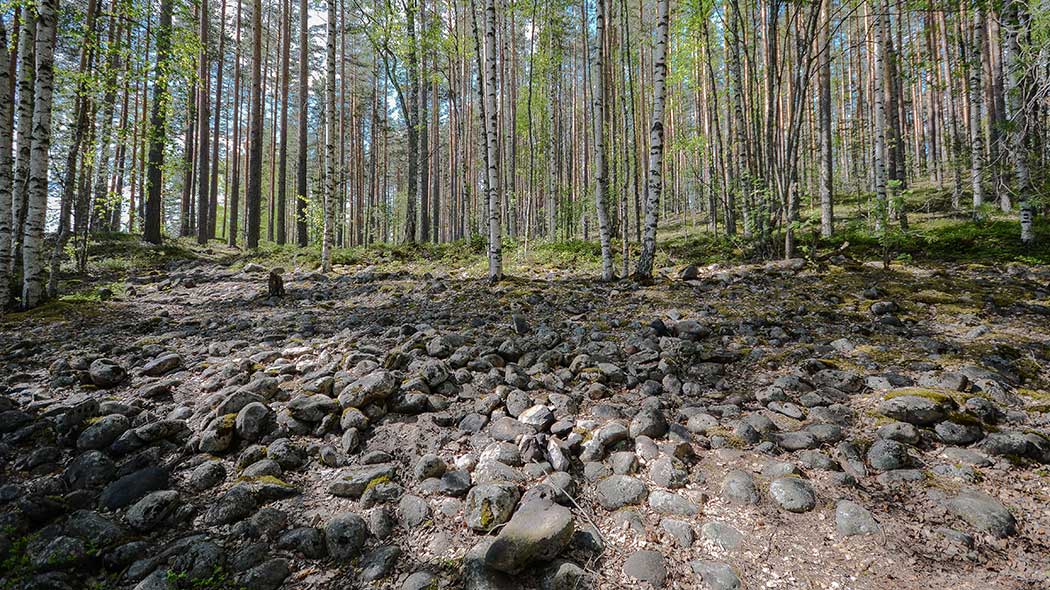 When the water went down, also iron ore was dredged from Lake Rutajärvi to be transported to a foundry. Lake ore, which contains plenty of iron, is gradually precipitated from the surface water to the bottom of the lake.

There were also important winter roads on the ice of Lake Rutajärvi, as well as on Lake Päijänne . For safety reasons it was important to mark the roads every year. The responsibility was divided between the houses to mark different sections of the roads.

The extensive waterways and the connection to Lake Päijänne also made log floating possible, and it continued on Lake Rutajärvi until 1946.