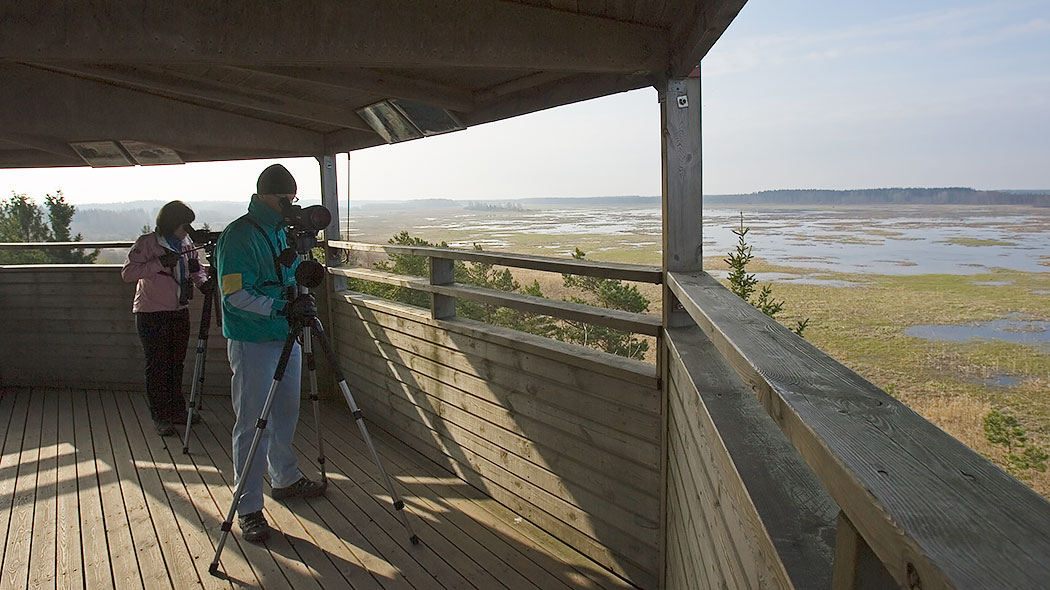 The National Park, dominated by a mire, is a bird paradise in the middle of a heritage landscape. The park can also be visited via waterways. 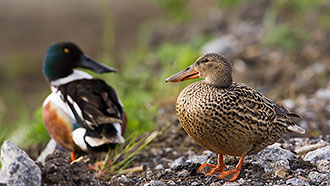 The National Park’s great lake has a long history. These days the edges of the lake are decorated by shore meadows. The lake is known for the richness of its bird populations. 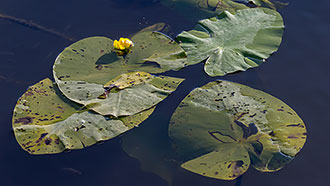 The yellow waterlily (Nuphar lutea) enjoys the open waters of Lake Puurijärvi, which is flanked by shore meadows that have been kept low by grazing cows and by swamps that are submerged during flood times. 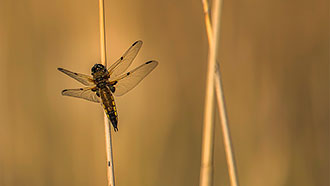 The regional emblems of the National Park are the yellow waterlily and the four-spotted chaser (Libellula quadrimaculata). 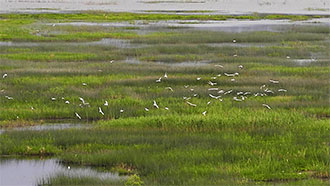 Flocks of hundreds of birds are a breath-taking sight

Hear the call of hundreds of cranes. See flocks of whooper swans (Cygnus cygnus) at Lake Puurijärvi. The National Park is an important resting place for migrating birds. 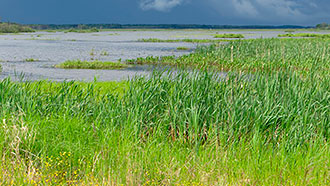 In the early 2000s, the lake was threatened by overgrowth. The water level has been raised and the general condition of the bird lake has been improved by huge restoration efforts. 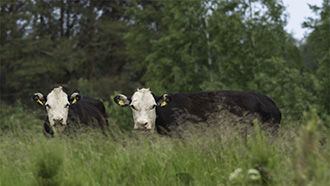 Management of landscapes is not only pleasing to the eye but also helps with diversity! Grazing is beneficial for shorebirds, plants and many insects. 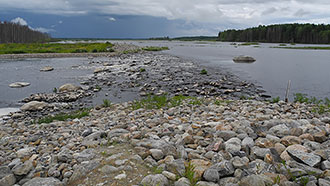 The area (4,5 sq.km.) of Lake Puurijärvi is almost overgrown. In Finland it is one of the lakes with largest number of birds. It grows sedges (Carex), common reeds (Phragmites australis) and horsetails (Equisetum). On the lake shores, there are flood meadows and moist bushland.

Lake Puurijärvi is one of the important bird habitats in Finland (FINNIBA), and it has been proposed for inclusion in the Ramsar List of Wetlands of International Importance.

The mires of Puurijärvi-Isosuo are part of the coastal Finland's zone of raised bogs. The barren centres of the mires are raised several metres higher than the more luxuriant, wet edges. Few pines stand on the centres, which consist of thick layer of turf growing sphagnum moss. 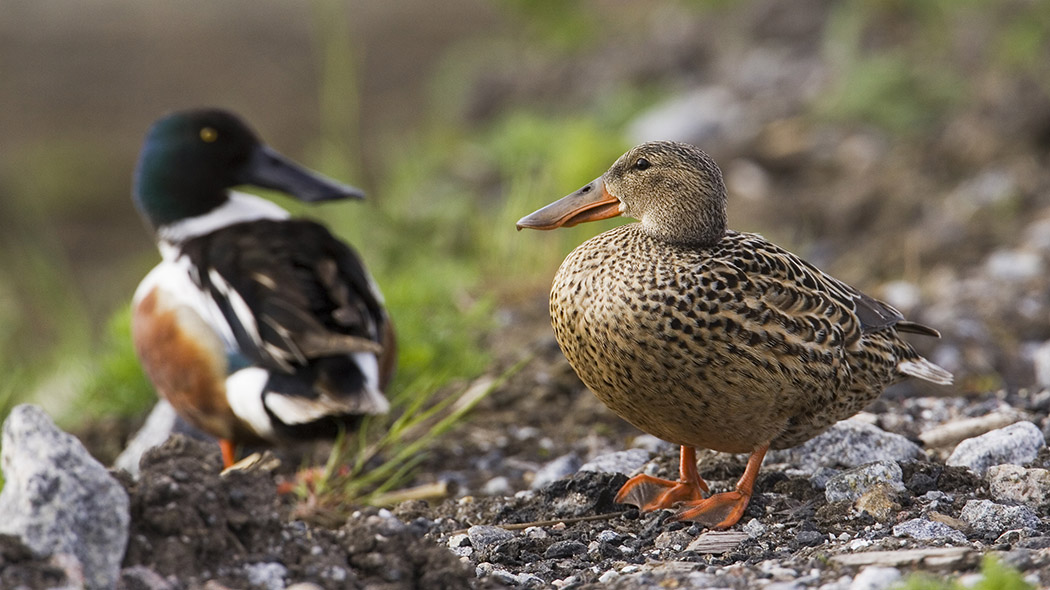 The mire vegetation is at its most beautiful in the beginning of the summer, when for example the Bog-Rosemary (Andromeda polifolia), the Marsh tea (Ledum palustre) and the Cloudberry (Rubus chamaemorus) are flowering. Along the duckboards, you can also see carnivorous plants: the Round Leaf Sundew (Drosera rotundifolia) and the Great Sundew (Drosera longifolia). Along the trail going to the campfire place on Isosuo Mire, you can also learn about peat digging.

The yellow waterlily floats in the wetlands

The yellow waterlily prefers the shallow open waters of Lake Puurijärvi, where its heart shaped leaves float on the surface. The floating leaves are an excellent resting place for water insects like water striders (Gerridae) and waterlily leaf beetles (Galerucella nymphaeae) who eat the lily’s leaves. In the late summer, the yellow waterlily is easily recognised by the developing fruit. 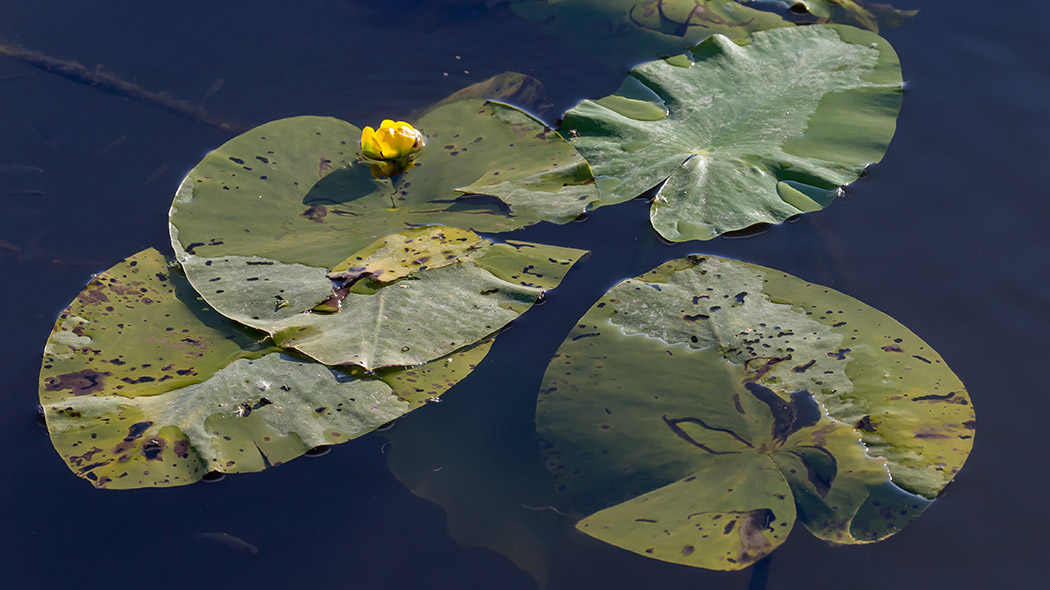 The yellow waterlily thrives in a wide variety of waterways. At Lake Puurijärvi it can be found in old boating canals and pools in the banks that are encircled by common reeds (Phragmites australis) and sedges (Carex). The wetlands at Puurijärvi - Isosuo are diverse and in the National Park there is a variety of areas that are affected by water, from the open waters of the lake to wilderness-like raised bogs that have slowly developed over time.
The banks of the Lake Puurijärvi are at times submerged in water. The bank’s vegetation requires the effects of moving water that form different types of paths, reed beds, meadows and moist shore meadow areas where willows (Salix) grow. The variations between low and high vegetation provide suitable habitats for wetland insects and birds.

The middle sections of raised bogs that have developed over long periods only get water from rainfall. The centres of Isosuo and Ronkasuo mires are open and treeless. In comparison, Korkeasuo, Kiettareensuo and Aronsuo mires are drier and more varied. The barren centres of the raised bogs have risen several metres higher than the more lush, wet edges.

The smaller insects hardly have time to notice that they have been caught before they are eaten by the four-spotted chaser. The sun is hot and the warmth of the summer’s day glows on the surface of the wetland’s waters. All kinds of buzzing and whirring can be heard until the dragonfly catches another horsefly. Dragonflies are insect predators, whose sharp jaws catch all smaller creatures - and sometimes even bigger ones.

Fossils of dragonflies have been dated back to the Carboniferous period, some 300 million years ago. The wingspan of the largest individuals has been more than 70cm wide. They are still the largest ever flying insects. The four-spotted chaser that is found in the Puurijärvi - Isosuo National Park is one of the most common species of dragonflies in Finland and the whole of the Northern Hemisphere. Compared to its prehistoric cousins, its wingspan is rather modest at 8cm.

From its chosen position, the four-spotted chaser keeps a look out for insects and then darts to catch its prey, only to return to the same position again with its catch. It is such a skilled hunter that almost every attempt ends up in a catch. Its diet consists mainly of small, two-winged insects but sometimes it will also eat other dragonflies. Cannibalism isn’t unheard of. Its long, flat and triangular body is yellowish-brown and hairy. In its translucent wings there are spots in the mid-wing nodule that are typical of the species and are what distinguishes it from other related species. Its scientific name ibellula guadrimaculata means “dragonfly with four spots”. 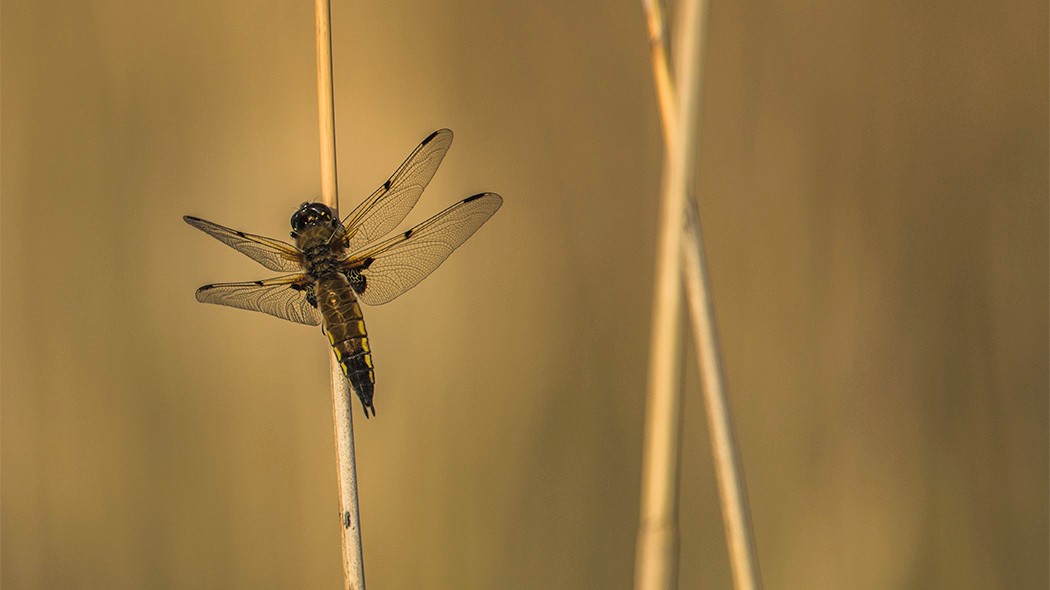 Mid-summer in the wetlands is time for breeding. The four-spotted chasers mate in the air during flight. The female lays eggs by tapping the surface of the water repeatedly with her abdomen, or by shaking the eggs out of her abdomen as she flies along. Later, under the surface a living larva is hatched from the egg and it looks very different to an adult dragonfly. You might not guess that this larva will grow into a king of the air. The larva hunts for aquatic animals with a useful mask appendage. Many horror movies are most likely inspired by this frightening appearance.

You may have heard dragonflies sometimes described as short-lived “mayflies” although in Finland, depending of the species and temperatures, the larvae stage can take from a few months to many years. Dragonflies are hemimetabolous insects; they do not have a pupal stage. When the larva is ready to metamorphose, it makes its way to the surface in the early morning and climbs up a reed or other plant. The adult dragonfly crawls out of its larval skin, the exuvia, arching backwards when all but the tip of its abdomen is free, to allow its exoskeleton to harden. A person observing this event for the first time is sure to be surprised! A newly hatched adult pumps up its wings, which makes them ready for flight. The four-spotted chasers that begin their flight season in May are gone by August and only the larvae in the water struggle through the winter until next summer.

The four-spotted chasers are known as a nomadic species. A mass migration containing hundreds of thousands of individuals usually happens when there are many simultaneous hatchings and the conditions for migration are favourable.

The four-spotted chasers are not very picky in terms of water, but the yellowy, diverse wetlands of Puurijärvi-Isosuo National Park are its particular favourites. There is enough heat, nutrition and breeding sites there.

Flocks containing hundreds of birds are a breath-taking sight

The most abundant species on the mires of the National Park are the Meadow Pipit (Anthus pratensis) and the Yellow Wagtail (Motacilla flava). Also many wader species nest on the mires, such as the European Golden Plover (Pluvialis apricaria) and the Wood Sandpiper (Tringa glareola). On Isosuo Mire nest the Great Grey Shrike (Lanius excubitor) and the Red-throated Diver (Gavia stellata). Isosuo Mire is the area with most valuable set of bird species in the National Park. During the autumn and spring migrations, waders as well as geese and cranes (Grus grus) rest on the mires. 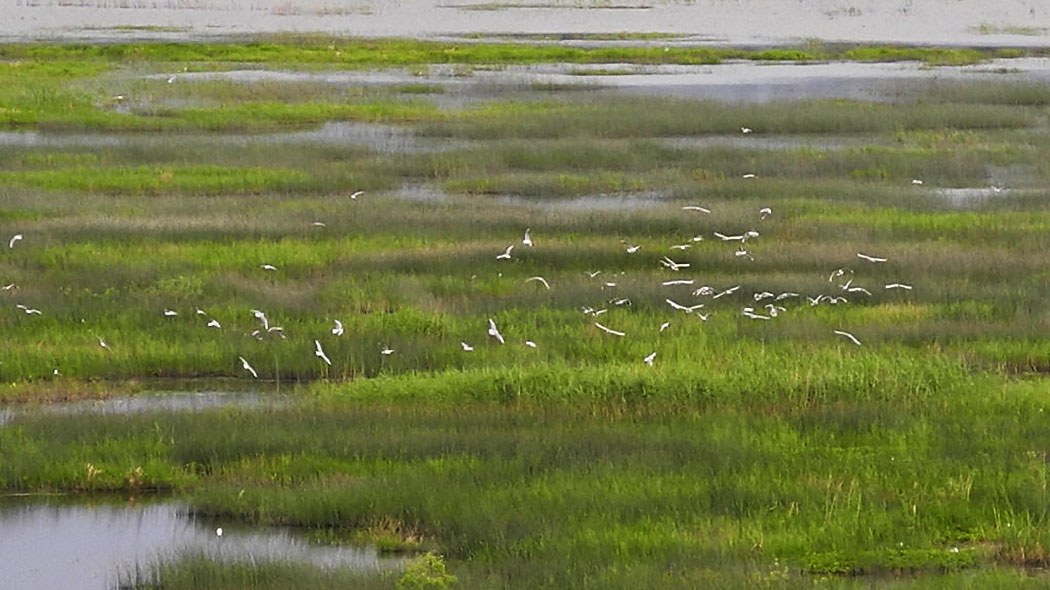 Lake Puurijärvi is an important stopping place for migrating water birds, such as geese and swans. In the spring, it is possible to see more than 400 Whooper Swans (Cygnus cygnus) and hundreds of Bean Geese (Anser fabalis) on the lake. About 35 species of birds nest around the lake and the surrounding flood meadows, for example the Bittern (Botaurus stellaris), the Whooper Swan, the Marsh Harrier (Circus aeruginosus), and the Black Tern (Chlidonias niger) which is rare in Finland. The lake is also an important preying area for many birds nesting in the surroundings, such as the Osprey (Pandion haliaetus) and the Northern Hobby (Falco subbuteo). Also the White-tailed Sea Eagle (Haliaeetus albicilla) can be seen above the lake preying on Muskrats (Ondatra zibethicus) or fish.

In the 1700s, Lake Puurijärvi had clear water and hard bottom, but in the next century the draining of mires and clearing of rapids caused the water level to go down. Because the lake is so shallow, the landscape of Lake Puurijärvi changes greatly, depending on the water level. During dry spells, only little ponds of open water can be seen. There is a threat of the whole lake becoming overgrown and swampy. The challenge for the next few years is to restore the bird habitat of the lake. 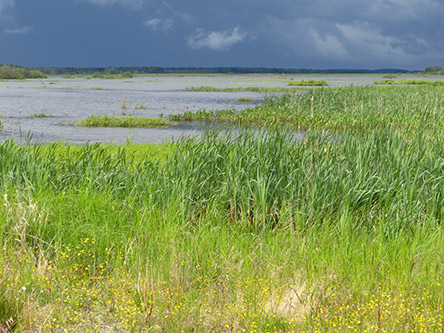 The traditional way of managing the shore meadows (1,0 sq.km.) is pasturing. This area is one of the largest traditional landscape sites in Satakunta region. Managing the landscape improves the conditions for the shore birds and the insects living on the open meadows on the shores. 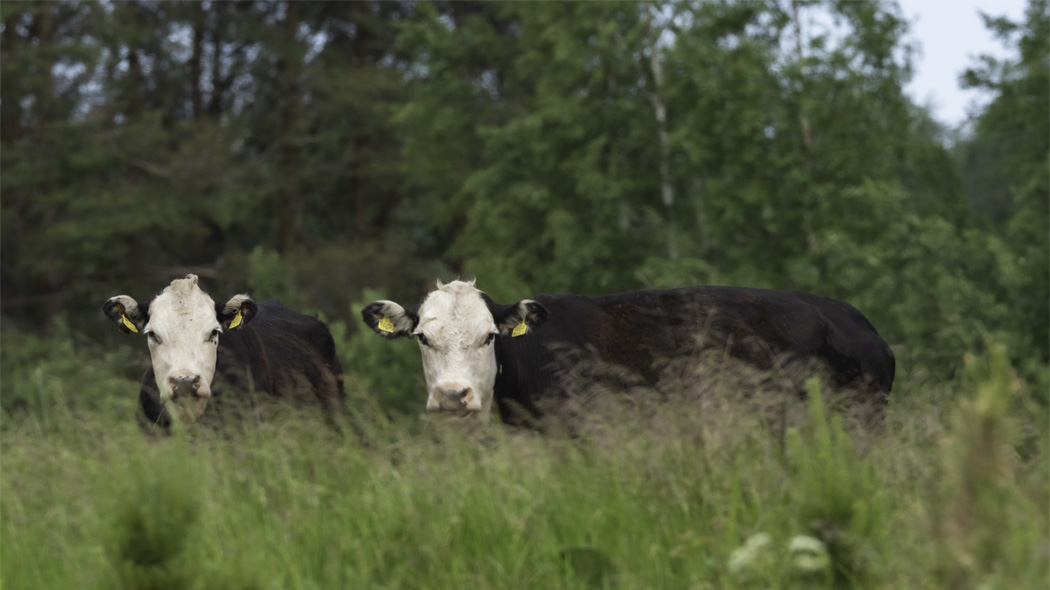