At the end of the Ice Age over 10,000 years ago, a glacial lake was formed by a dam created by retreating ice in the Ilomantsi area. This glacial lake in Ilomantsi also covered the current Petkeljärvi area. After the ice melted, the lake broke out and the current lakes in the area were formed.

The earliest known remains of prehistoric culture in the Petkeljärvi National Park are two Stone Age settlements on Petkeljärvenharju. In addition, several early settlements have been found on the shores of the larger lakes outside the protected area. The eskers and water networks in the area have served as good transport routes, and narrow eskers and isthmuses were excellent places for hunting deer, moose and other game. The place names Petraniemi and Petraluhta refer to the deer that was once an important game species and possibly attracted travellers to the area.

No Bronze and Iron Age discoveries have yet been made in the Petkeljärvi area, so the next time the spotlight of history shines in the area is not until the Middle Ages. The Petkeljärvi National Park area has apparently been uninhabited for most of history but the Tetrijärvi area between Möhköntie and the National Park belonged to the village of Kuuksenvaara, which was established in the 1500s.

Surplus land of the state

The first written sources concerning Petkeljärvi date back to the 19th century. During the general parcelling of land in 1832, the northern side of the current national park was limited to the village of Riihiniemi, and the Petkeljärvi area remained with the state. State-owned land became common land for the joint use of the surrounding villages. Some of the areas were meadows and some were slashed and burned, but the largest part was forest land.

The state's surplus lands were marked on a map in 1864 for taxation purposes. The surveyors did a good job: at the time, the area was measured to be 370 hectares. Today, the land area entered in the land register is 370.9 hectares. Based on this map and the related report, there were about 20 hectares of meadows, about 8 hectares of slash-and-burn land and about 300 hectares of forest in the Petkeljärvi area. Approximately one third of the forest was assessed to be sturdy log forest, which at that time could mean that the trees were up to 300 years old. Petkeljärvi meadows were flood plains, i.e. periodically flooded coastal or mire meadows. Petraluhta on Ruununsaari Island may have been a joint use meadow already in the 1600s, and the last time the records show that the meadow was in shared use was as late as in the early 1970s. The meadows were carefully utilised and important for livestock farming. In the past, fodder was collected from these natural grasslands even over long distances. In summer, haymakers usually worked in fields for several days in a row. Hay was collected in a pile to dry. At its highest, the piles could reach a height of up to four metres. The piles looked like a roof brush. In the winter, the hay stored in piles was transported to cattle for fodder. There are still about 20 hectares of swamp meadow in the national park.

In the 19th century, only a small part of Petkeljärvi area remained slash-and-burn land, and it was eventually completely prohibited to slash and burn surplus land owned by the state. In previous centuries, however, it is likely that slashing in the area has been more extensive.

During the 19th century, the forests in the national park area were felled throughout. Loggings began in the 1830s in the Petraniemi area and proceeded north from there to the northern part of the park in the 1860s. Later, forest was felled from the national park area for railways sleepers to build state railways. Based on the age of the trees, these railway sleepers were probably felled at the northern tip of Ruununsaari Island and at the Korkeasärkkä esker. Logs were transported through waterways. In addition to natural timber floating routes, a floating channel was dug from Pieni Kuikkalampi Lake to Petkeljärvi Lake.

The demand for coal also increased in the 19th century with the establishment of Möhkö ironworks, and some of the felled trees ended up in one of the many coal pits in the area and were sold as coal for ironworks.

The 1864 map depicting the surplus land owned by the state and area measurement made it possible to rent the areas. Peasants and industry representatives had shown interest in the surplus lands long before the survey. One of the parties interested in the areas was Möhkö ironworks.

A separate state park was established in the surplus lands in Petkeljärvi in 1872. The farmers in the nearby area offered to buy the land again, but the state had started to tighten its grip on the use of forests as the value of forests was increasing with the growth of industry. The state protected the value of its property by prohibiting all slashing and burning in the area and hired a forest ranger to monitor the prohibition. Petkeljärvi's last ranger retired in 1957.

During the Winter War, battles were fought all the way in the Petkeljärvi area. The hardest battles took place in the Taivallampi and Oinassalmi areas north of the national park. Piistinniemi, located east of Petkeljärvi, was strategically important, as from there Finns were able to secure the right side of Oinassalmi and ensure that the enemy could not cross the strait. The patrols of Petkelniemi were replaced and serviced through the national park lands, and the area also often served as a starting point for patrols who attacked the enemy from behind. 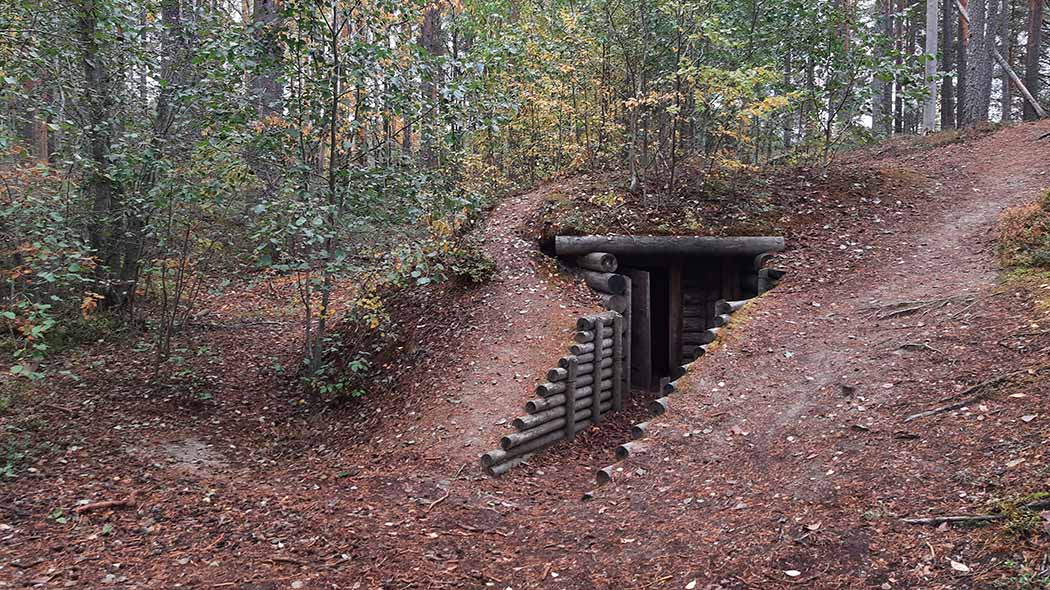 After the end of the Winter War, armament works still continued in the Petkeljärvi area in case the war continued for some reason. In the new defence plans, Petkeljärvi's defence stations were outposts, from which an attempt would have been made to delay a possible new attack from Russia. A new main line of defence was planned further away to the back. However, there was no need to fight at these stations anymore, as in the Continuation War the progress of the Russians in the Ilomantsi area was stopped at Möhkö.

The first idea for protecting Petkeljärvi came in 1933 when the forests in the area were spared from logging. As a result of the Second World War, two out of four national parks established in 1938 ended up on the Soviet Union’s side of the border after giving up land. The aim was to replace lost national parks with new ones. New replacement parks were suggested, among others, by natural sciences clubs, but in Petkeljärvi locals were also actively involved in the matter. Petkeljärvi National Park was finally established in 1956 together with six other national parks: Lemmenjoki, Liesjärvi, Linnasaari, Oulanka, Pyhä-Häki and Rokua.

The development of the national park for recreational use began in 1957 when signposts and trails were brought to the area. In 1959, the area celebrated the 100th anniversary of forest administration. It also came out that there was a need to find a ranger for the park as soon as possible and a cottage should be built for them. In the same year, a road was built with employment funds from Oinassalmi to Petraniemi. Some of the timber from the road construction site was made into boards and logs for a park guard's hut that would be built later. The hut was completed in 1960, The ranger’s hut stayed inhabited until the mid-1970s, after which it has not been used much. The hut was renovated in 2004.

In other words, the National Park was of interest to tourists from the very beginning, and in the annual report of 1965, the area ranger  commented on the matter as follows:

The natural forest and landscape seem to be of constant interest to people to counterbalance the pacing of hectic life. As a result, the number of visitors to the national park has increased year by year. During the past rainy summer, the number of visitors was higher than in the previous year, reaching about 9,000. About 4,000 of them were overnight stays in the campsite and 5,000 were day visitors. 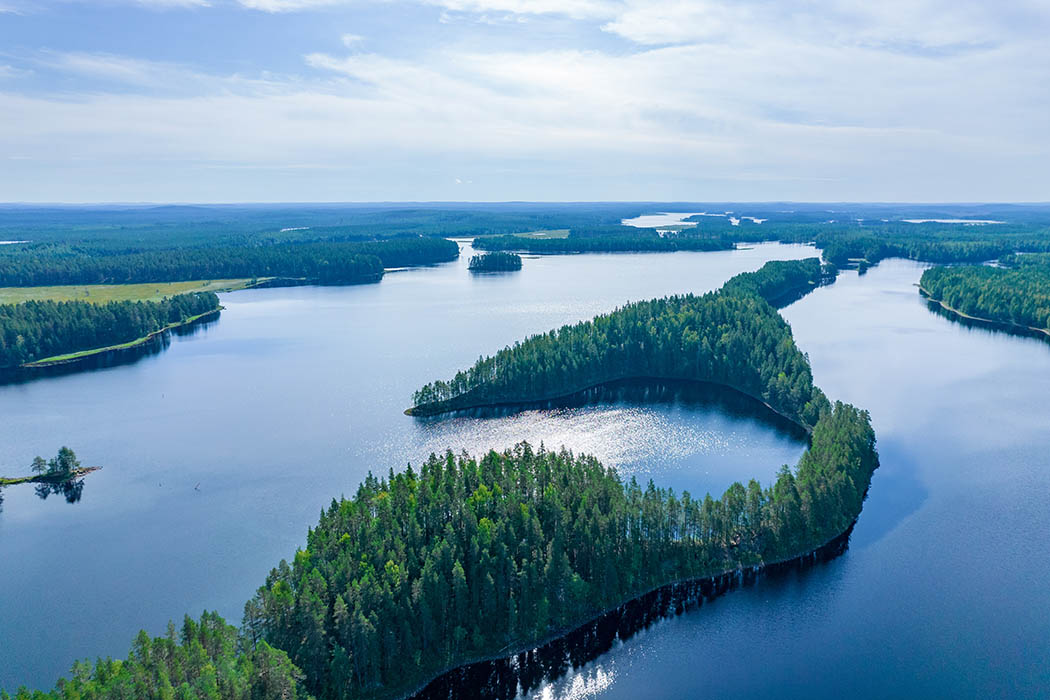