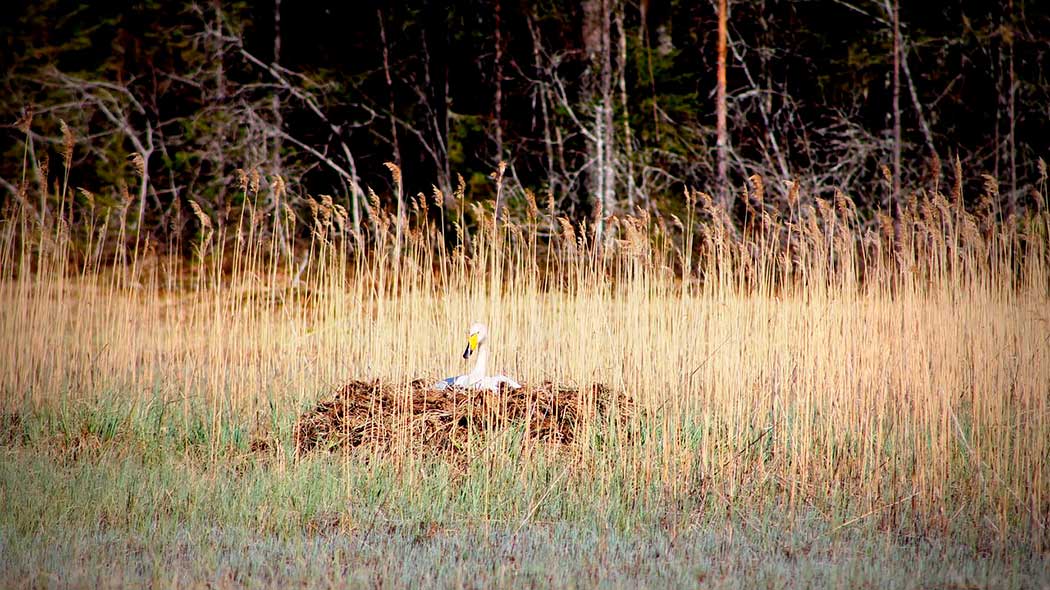 Seitseminen National Park is alive with the rustling of majestic old-growth forests in the southern Suomenselkä region. The mire nature comes to life in spring when birds begin nesting in the open areas. 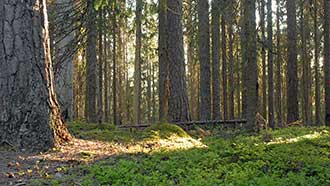 Wander along a trail between the moss-covered trees. Many hole nesters thrive in the protection of old shield bark pines. Read more > 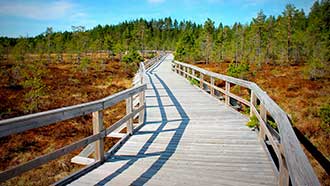 More than half of the national park is made up of important nesting mires for birds. Watch cranes and whooper swans raise their young in the mire ponds. Read more > 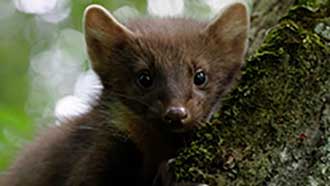 The European Pine Marten in Seitseminen

The European Pine Marten, is the emblem species of the national park. This agile animal is well-adapted for climbing and chooses a hollow tree as its resting place. Read more > 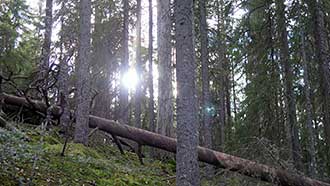 Climb to the highest point in the park – Seitsemisharju Esker. Hike to the Pitkäjärvi forest cabin on Salmiharju Esker. The eskers are beautiful reminders of the Ice Age. Read more > 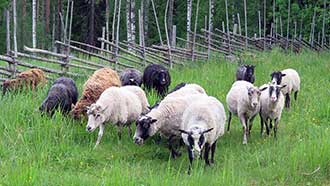 Drop in at the old Crown Tenant Farm. The traditional lifestyle is nostalgic and you can meet our lovely ecological managers.
Read more > 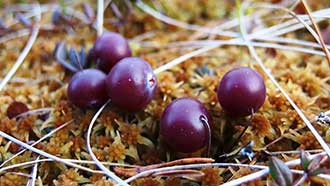 Drained mires are returning to their natural state

The mire nature is prevailing as drained mires are being restored to wet peatlands. The mires bind greenhouse gases (metsa.fi). Read more > 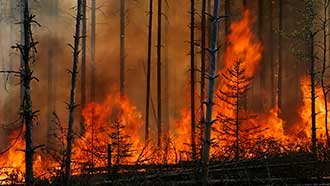 Forests are being restored by burning

Prescribed burnings simulate the effects of natural forest fires. For many species, forest fires are a necessity for survival (metsa.fi). Read more >

The heart of the National Park is the old-growth forest of Multiharju , which has been protected already in 1910. The oldest shield bark pines are almost 400 years old, and there are still marks of the past forest fires on their stems. Here and there in the shadows of the ancient spruce forest there are handsome old Aspens (Populus tremula), but most of the deciduous trees have fallen to the ground and become overgrown with moss a long time ago. 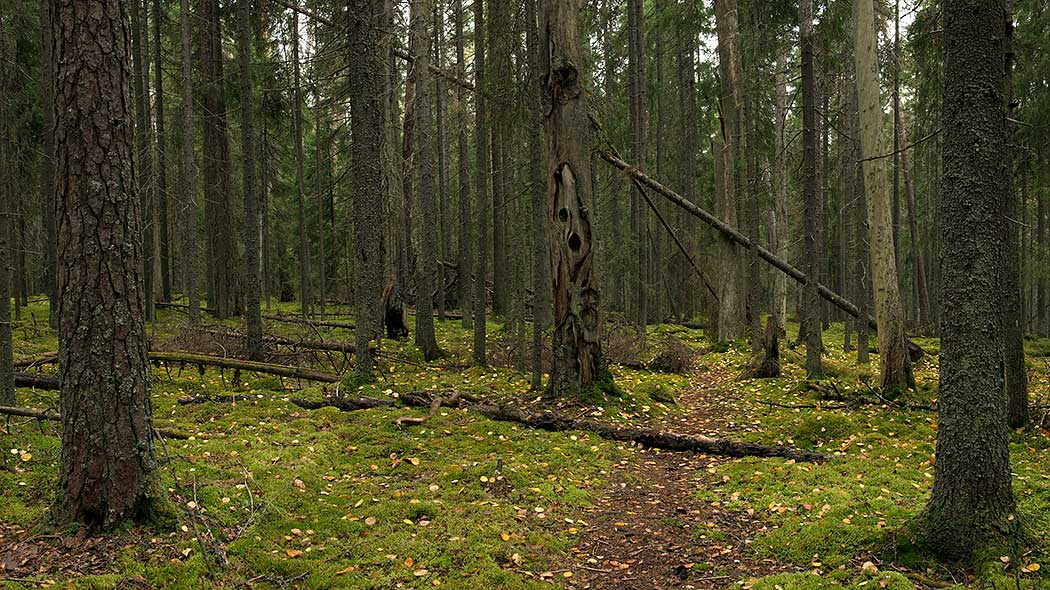 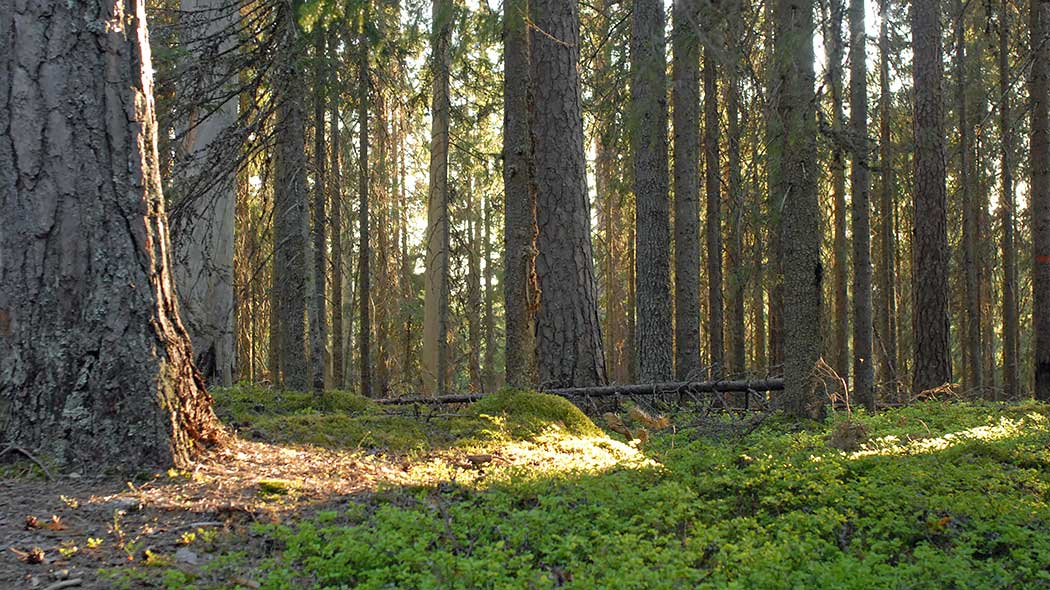 The plants and lichen species of the old forests also include the Northern Coral-root (Corallorhiza trifida), the Lung lichen (Lobaria pulmonaria), and a lichen species called Nephroma resupinatum. Decayed wood offers habitat for many threatened insects. 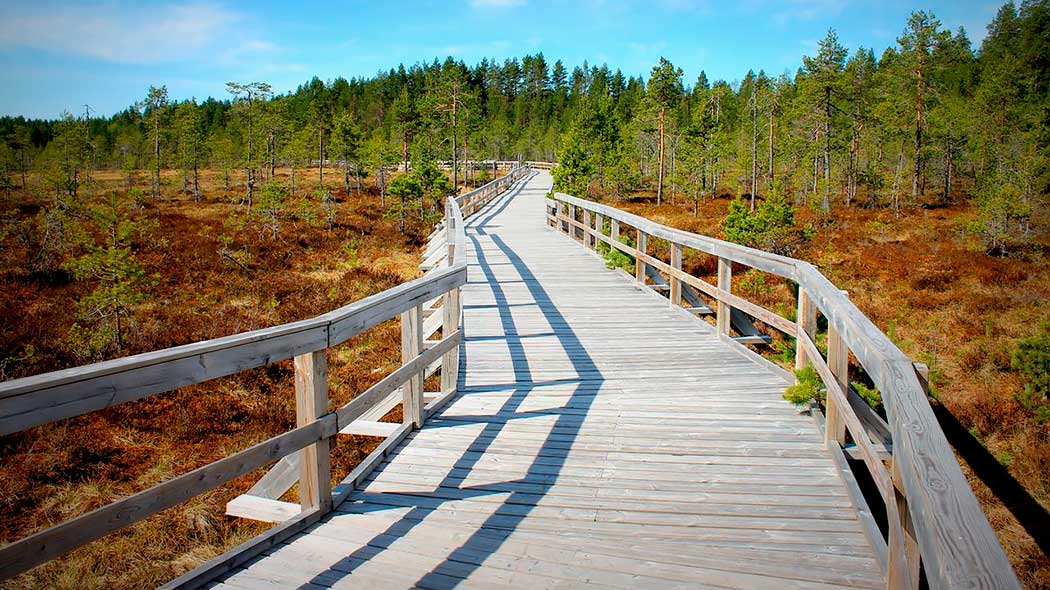 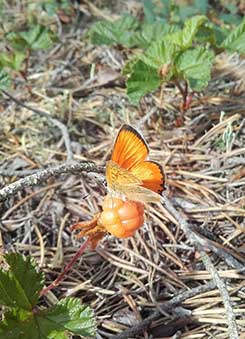 Mires make more than half of the National Park area. There are pine bogs, spruce bogs and quite large treeless bogs. Most of the mires in Seitseminen were drained in the 1960s and 70s. Since 1987 they have been under restoration (metsa.fi) back into their natural state. In the spring and summer the mires are full of life. Black Grouses (Tetrao tetrix) are courting on the spring snow. The Common Crane (Grus grus) and the Whooper Swan (Cygnus cygnus) bring up their brood in the mire ponds, the Wood Sandpiper (Tringa glareola) feels at home in the edge of the mire and the forest. On the mires of Seitseminen you can also see the northern Willow Grouse (Lagopus lagopus).

The European Pine Marten in Seitseminen

The European Pine Marten is widely found in the world’s northern coniferous forest zone. Pine martens occur throughout Finland, with the exception of the open fell area. They are also common in our neighbouring countries, including Central Europe and western parts of Asia.
Finland had very few pine martens in the 1920s and 1930s, but now the population is thriving. A pine marten can live for more than 10 years. 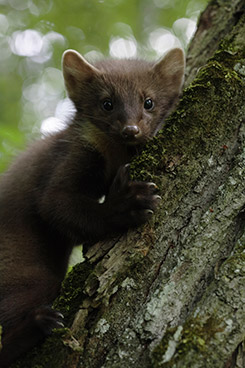 The European Pine Marten has brown fur with a yellowish-white patch on its throat, which is why it is also called ‘kultakurkku’ (golden throat) in Finnish. It has a long, thick tail and an elongated body. The male’s body length is 45-55 cm and the tail 20-30 cm. Male animals weigh 1-2 kg, and the female is smaller than the male.

Pine martens live alone except during the mating season. In terms of living habits, the pine marten is cautious. It is active mostly at dusk or during the night and is not seen very often. People are more likely to notice the beautiful paired tracks that it leaves in the snow. The pine marten moves around in leaps: the distance between one pair of tracks and the next is 50-80 cm.

Although it’s skilful climbers and can jump distances of 3-4 metres from one branch to another, the pine martens usually moves around on the ground. During the daytime, it rests in hollow trees, old squirrel nests, under roots and in stone crevices. The pine marten’s winter coat protects it in freezing weather, but it has to dig under the snow to sleep during the coldest periods.

The forest and its trees play an important role in the life of a pine marten: it hunts in trees and uses them for protection from its enemies, such as the fox, owl and hawk. Pine martens favour old-growth forests with plenty of old pines, deadwood trees, stumps and roots. They have also adapted by taking advantage of the growing vole populations in felling areas. The pine marten has even spread to quite densely inhabited regions and is known to visit waste and landfill sites near leisure homes and towns.

The European Pine Marten's diet consists of voles, squirrels, birds, carcasses and even plant-based food. During poor vole autumns, it also collects berries and mushrooms, and stores them for difficult times. An excellent sense of smell allows the animal to find its caches even under a thick layer of snow.

Pine martens mate during the summer. They have slow foetal development, and the young are born in May. Suitable locations for a nest include old woodpecker holes, squirrel nests or birdhouses with a large hole. 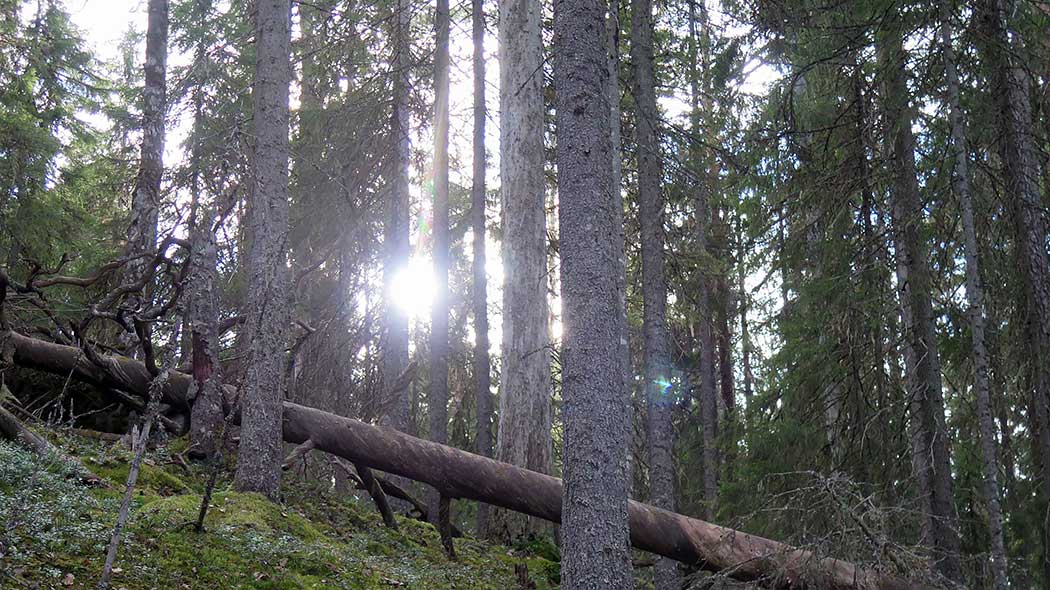 The most visible signs of the Ice Age in Seitseminen National Park are the eskers which run from north to south. Seitsemisharju Esker on the western edge of the park rises about 20 metres from its surroundings. Its highest places are Rappumännynmäki (220 metres above the sea level) and Kulomäki, which have been islands during the sea and lake phases after the Ice Age. To the east of Seitsemisharju Esker, there is lower Salmiharju Esker, and on top of it is the road to Pitkäjärvi Loggers' Cabin. 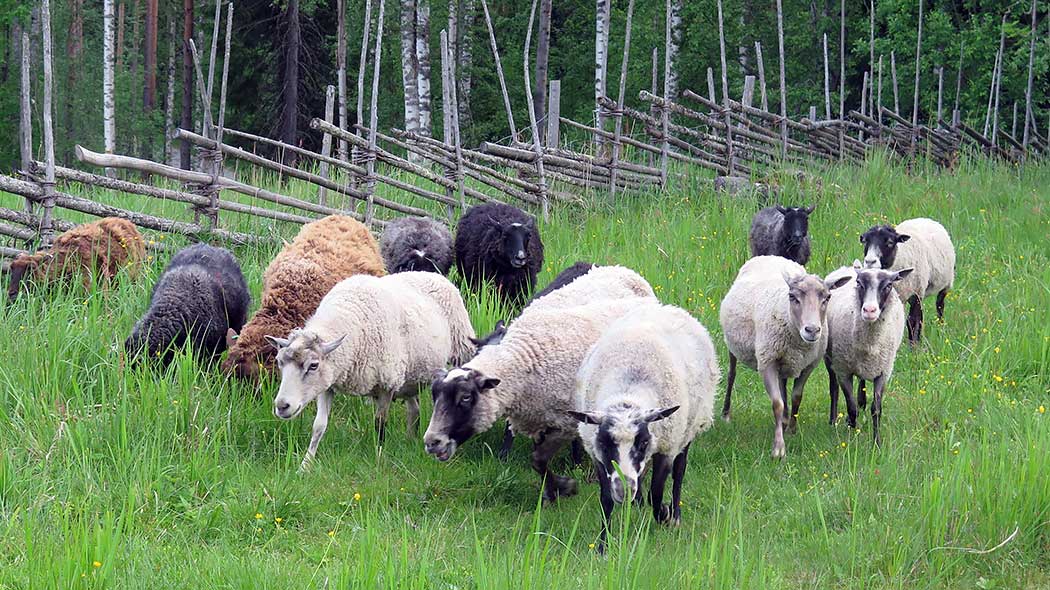 In the southern part of the park, the fields, meadows, paddocks and forest pastures of Kovero Crown Tenant Farm and their surroundings form an important entity. The species of the traditional biotopes include the Eyebright (Euphrasia stricta), the Sweet Vernal Grass (Anthoxanthum odoratum), the White Hedge Bedstraw (Galium album), and the Frog Orchid (Coeloglossum viride). The traditional landscapes are maintained by pasturing and hay making. The grounds of the farm are full of plants which in the old times were used for spices and decoration.

There are bears (Ursus arctos) living in Northern Pirkanmaa Region. During the resent years also wolves (Canis lupus) have spread into the area. The National Park's area is too small for both of the predators. In spring and autumn bear's footprints have been found in remote parts of the park. The wolves wandering through the area leave their footprints to be seen best during snowy seasons. In other seasons their tracks are hard to spot. Other areas, which are more popular with visitors, are less popular with animals. Both bears and wolves avoid any human contact and will move away from human's path. Even a small group makes quite a lot of noise, a lone hiker can, for example, sing a bit to make his or her presence known.

The Emblem of Seitseminen National Park is European Pine Marten