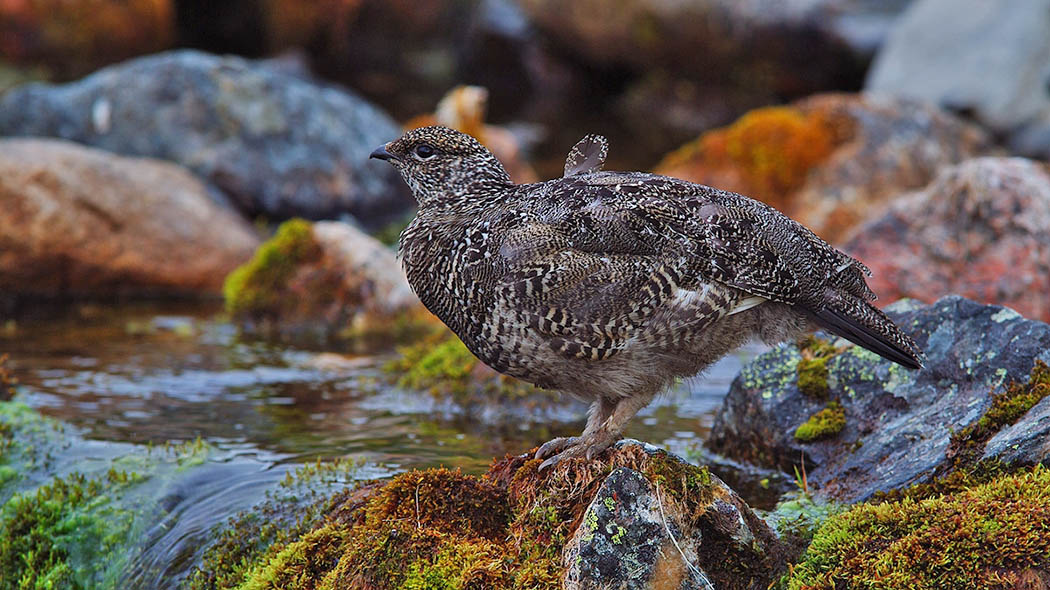 In Käsivarsi wilderness area, the great fells are reaching up to the sky. This realm of harsh winters and bright summers is home to species not encountered anywhere else in Finland. 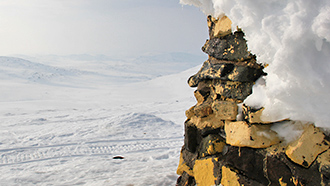 While the peak of Halti is on the Norwegian side, the cairn marking the border is at the height of 1,324 m. Have you written your name in the visitors’ book on Halti? Read more > 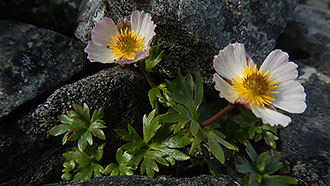 The glacier buttercup grows at higher altitudes than any other vascular plant. The growing season in the Käsivarsi fell region is one of the shortest in Europe.
Read more > 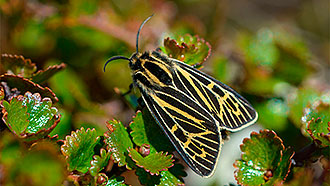 Butterflies of the Fellside Crags

The fells of Käsivarsi and Saana are known for their rare butterflies. One of them, the Labrador tiger moth, is featured in the logo of Malla Strict Nature Reserve. Read more > 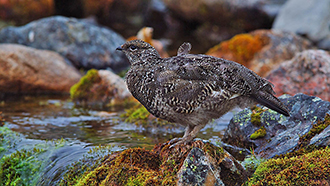 The emblem of the Käsivarsi Wilderness Area is the ptarmigan (Lagopus muta), which stay on their home fells the whole year round. Read more > 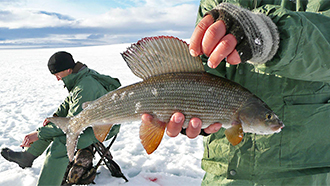 The fell lakes and streams are a fisherman's heaven. Who would not like to catch graylings, Arctic char and trout in their crystal clear waters? Read more > 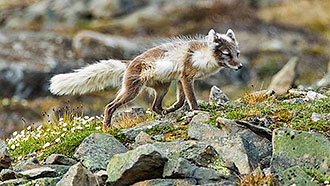 The Arctic fox, a smaller cousin of the red fox, lives in the harsh fell conditions round the year. This extremely rare species nests on the fells of Norway and Sweden. Read more > 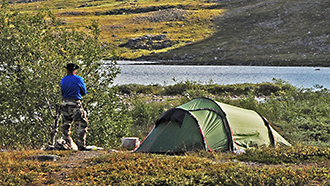 Nature is our second home. A responsible hiker leaves no trace in nature, does not waste wood and brings their rubbish home. Read more > 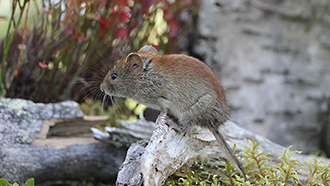 The fells of the Käsivarsi region were formed when the Scandinavian Mountains were first thrust into the sky hundreds of millions of years ago. This is where the older bedrock foundation of Finland meets the newer Scandinavian Mountains' bedrock. Halti is the highest of Yliperä's fells. Its peak is actually in Norway, but the landmark is the highest point in all of Finland - 1,324 metres above sea level. 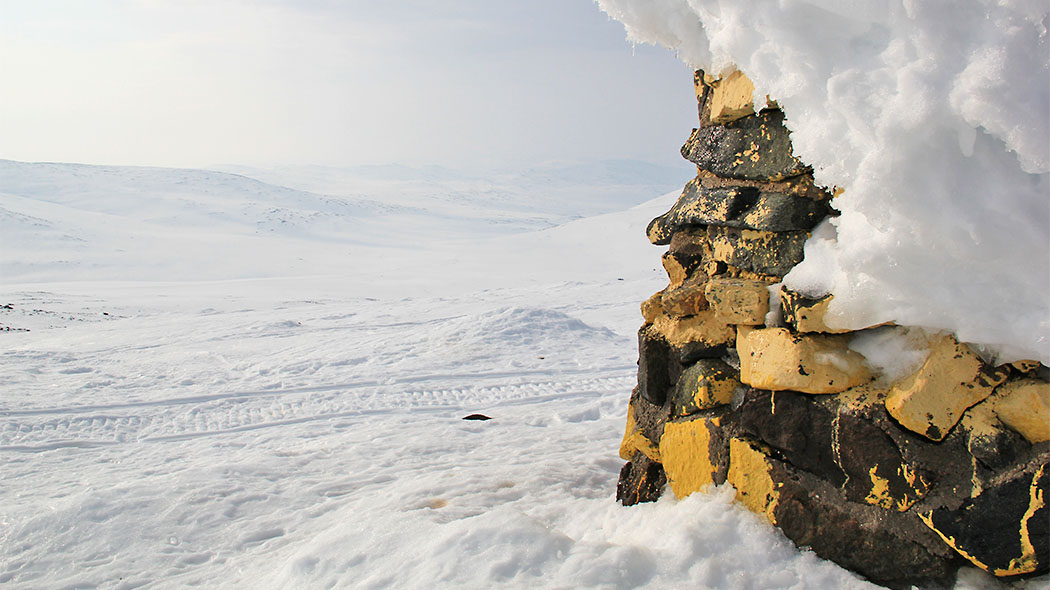 On the edge of the overthrust plate

As the mountains were being pushed upward, newer rock was pushed on top of the older bedrock. This newer rock was schist, which was formed from deposits on the seafloor. The schist, which can withstand the weight of the overthrust plate, protected the weathered rock layers beneath it. Saana, Saivaara and other cliffs in the area are the edges of the overthrust plate.

The terrain in the Käsivarsi region is very rugged in many places. In the Arctic climate, the formation of rock fields is very common. Temperature fluctuations cause the rock surface to contract, expand and crack. Water freezes inside cracks in the rock and eventually splits them into boulders, which roll to the foot of the fells.

The conditions found in the Käsivarsi region are unique in Finland. The elevation and northern location of the region mean that it has one of the shortest growing seasons in Europe - only roughly 100 days a year. The average annual temperature falls well below zero. Thanks to the Gulf Stream, the climate in the Käsivarsi region and Northern Norway is warmer than other regions at the same latitude.

The edges of the Scandinavian Mountains also bring lime to the soil, thus promoting the growth of numerous plants that cannot be found anywhere else in Finland. Many rare plants in the region are protected. 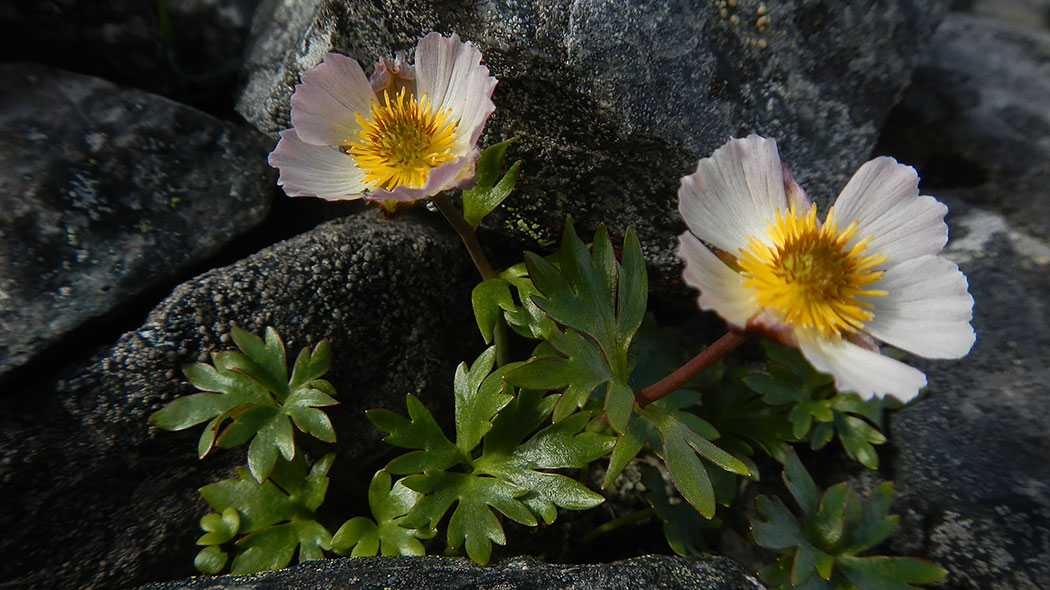 In the upper fells of the Käsivarsi region are mountain plants, such as the glacier buttercup, hairy housewort and Arctic bellflower. The sulphur buttercup can be found in snowbed areas and Arctic arnica and snowy cinquefoil grow on calcareous rock walls. Numerous rare plants, such as the Alpine fleabane, woolly pussytoes and Lapland rosebay grow in the Käsivarsi Wilderness Area.

The treeless summit is the prevalent vegetation habitat in the Käsivarsi region. Fell birch stands are only found in river valleys. The average treeless summit is 900–1,300 metres above sea level. A unique feature of treeless summits is the Arctic bell-heather heath. A heather plant, the Arctic bell-heather can be identified by its white, bell-like flowers and jagged shoots. Grassy heaths dominated by highland rush or sheep's fescue are also common in the middle oroarctic zone.

The vegetation in Yliperä's fell meadows provides sustenance for butterfly and moth species, whose juvenile phases are spent only on certain fell plants. The polaris fritillary larva feeds on the eightpetal mountain-avens and Arctic bell-heather. In the Kilpisjärvi area, 340 butterfly and moth species have been observed, 16 of whose entire population is found exclusively there. Named after the explorer Giuseppe Acerbi, the Arctic tiger moth (Acerbia alpina) also thrives on the highland plains of the Käsivarsi region. 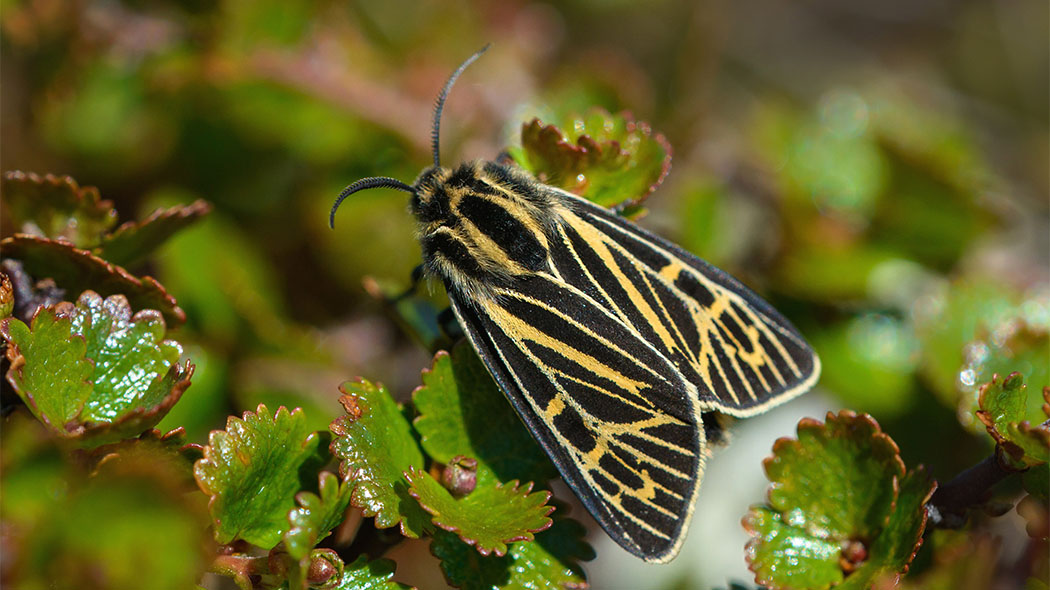 The butterflies and moths of the fell meadows take full advantage of the rare warm days and suitable conditions. Because the sun never sets during the summer, these lepidoptera fly at the most favourable times, day and night. However, many moth species do not fly until after midnight when the sun disappears behind the fells.

Fell insects are often dark in colour and hairy, so that they can collect as much warmth from the sun as possible in their tiny bodies. Due to the short summer, the time for butterflies and moths to fly is usually July. The Annjalonji Specially Protected Area was established to secure the habitat of endangered butterfly and moth species, and no one is allowed to stray from the trails whatsoever during the summer months.

The emblem of the Käsivarsi Wilderness Area is the ptarmigan (Lagopus muta), which stay on their home fells the whole year round. In Finland, the range of the ptarmigan covers the fells of the Käsivarsi region and Northern Lapland as well as the higher fells in the Pallas-Yllästunturi and Urho Kekkonen National Parks.

The ptarmigan holds out in the fells the whole year round. In the winter, it eats dwarf willow and dwarf birch buds as well as berries and seeds exposed from the snow cover by the wind. The related willow grouse thrives in the shelter of fell birch stands. Its primary source of food during the winter is fell birch buds. In the winter, both birds spend their nights in a snow nest, which helps them to save their energy and protects against predators.

At first glance, telling the difference between a ptarmigan and willow grouse might seem difficult. However, the birds you see above the treeline are probably ptarmigan and those seen in the fell birches are willow grouse. The two birds can be easily identified by their distinct calls. The ptarmigan produce a series of guttural growls and clucks, while the willow grouse makes a repeated 'co-peck, co-peck' sound followed by a distinct chuckling noise.

Both have snow white winter plumage. There are black feathers only on the tail, which can be seen while they are in flight. In the winter, the ptarmigan male can be distinguished by black stripes, which extend from its beak to its eyes. In the summer, ptarmigan can generally only be identified based on their habitat, even though the bird does have a characteristically slender body. 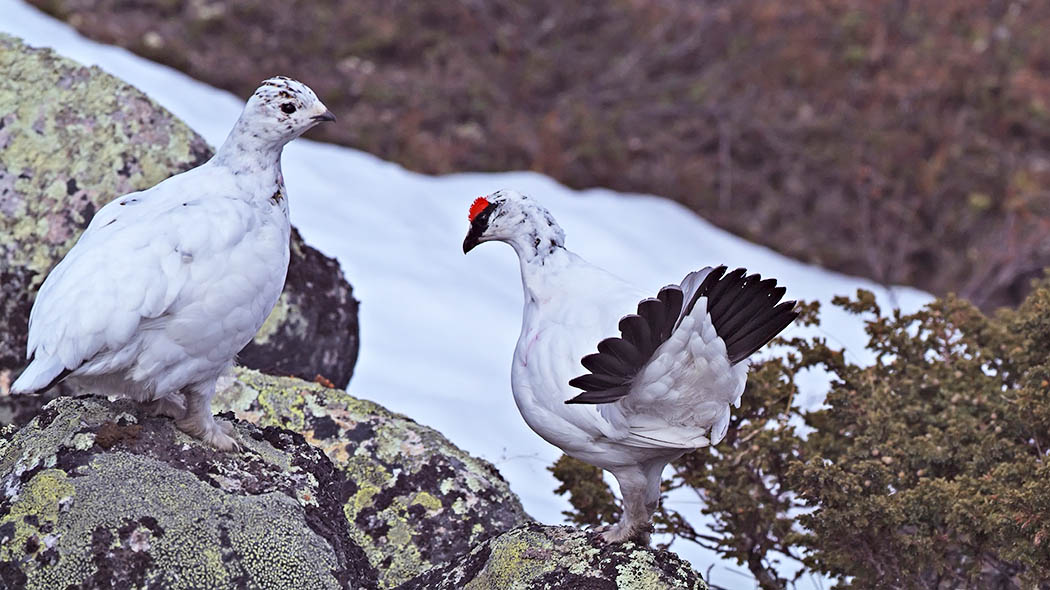 The ptarmigan's summer plumage colours include subtle rock grey and brown tones, while the willow grouse has a russet colouring to its plumage. The ptarmigan relies on its camouflage, waiting until the last minute to conceal themselves from hikers.

Other winged denizens of the fells

Approximately 100 nesting bird species, a majority of which are migratory, have been observed in the Käsivarsi Wilderness Area. In the frigid, snowy winters of the Käsivarsi region, only a few bird species are able to survive. In addition to the ptarmigan, the willow grouse and gyrfalcon have also adapted to the harsh conditions. 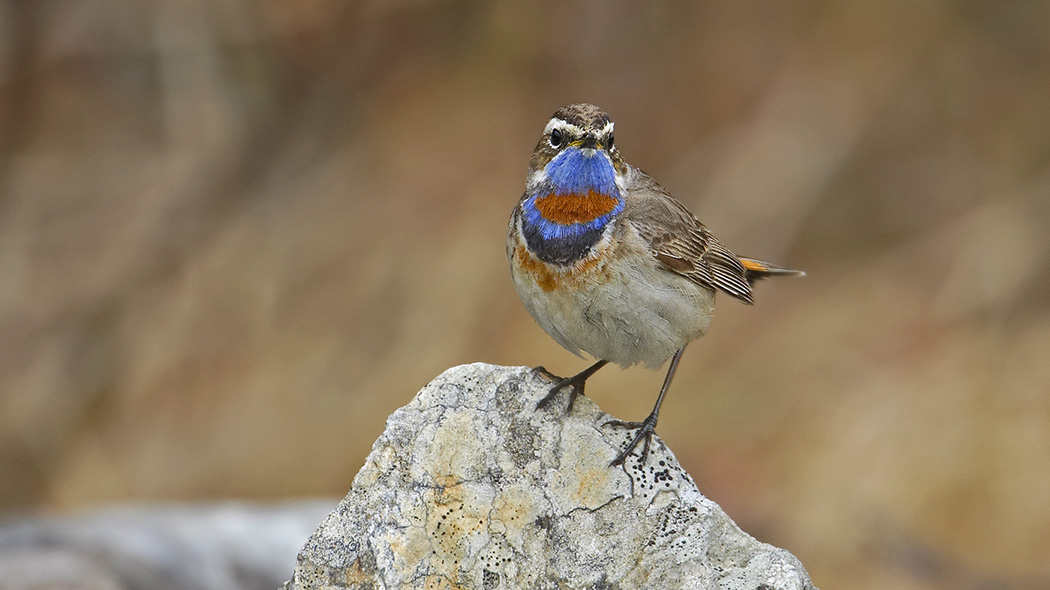 Northern waders, such as the dunlin, red-necked phalarope, bar-tailed godwit, purple sandpiper, Temminck's stint, broad-billed sandpiper and spotted redshank, are found here. A majority of some of these species nest in the Käsivarsi region.  Many birds of prey, such as the rough-legged buzzard, long-tailed jaeger and snowy owl, appear in large numbers and are linked to the population dynamics of the vole and lemming. 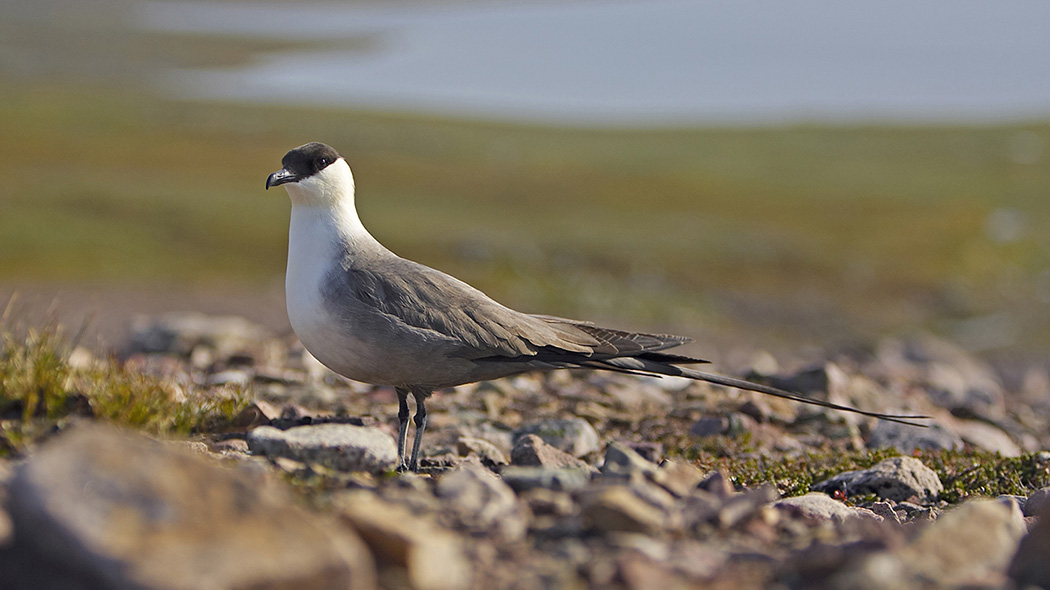 The common teal and Eurasian wigeon are two of the more common waterfowl found in the region. The long-tailed duck, velvet scoter and red-throated loon can also be spotted here. The Arctic tern makes its home in fell lakes. The white-throated dipper can easily be seen flitting about riparian areas.

The waters of the Käsivarsi region's high fells are oxygen-rich, clear and barren. Salmon species thrive here. Grayling and northern pike can be found at elevations of up to 700 metres. The largest grayling specimens can weigh as much as 2 kilograms, while pike can even top out in the tens of kilograms. Trout live in all running water areas. Because many migratory fish species are currently endangered, it is recommended that, for example, all trout be released in order to preserve the natural fish stocks. 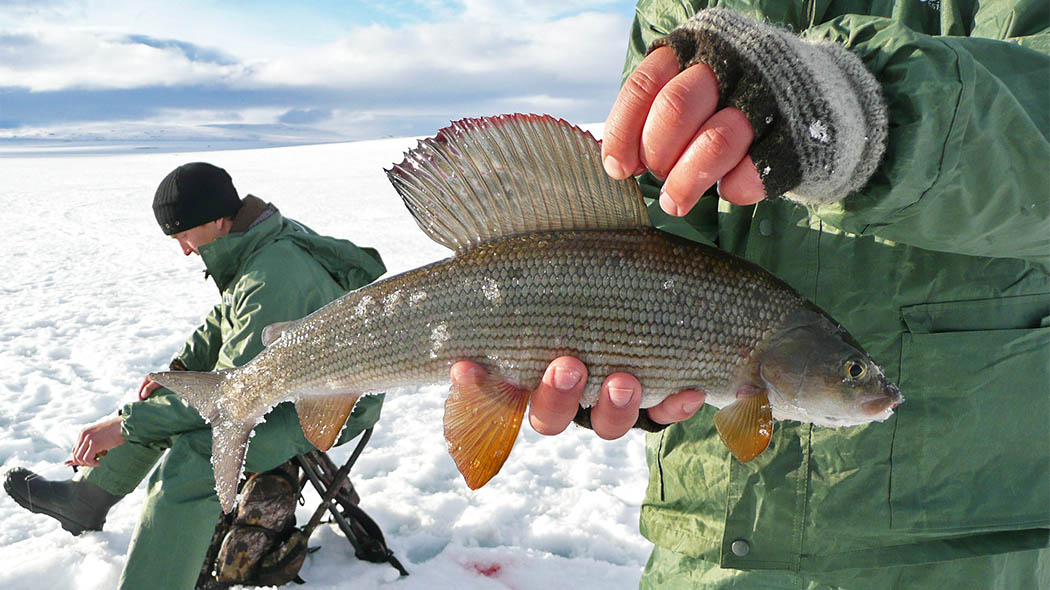 A paragon of fish, the Arctic char, is specially adapted to cold waters. In the summer, it lurks in the colder depths of lakes. On calm summer days, it rises to the surface to feed on mosquitoes. At the end of the last Ice Age, the Arctic char was one of the first fishes to inhabit the cold waters found in the fells. As the continental ice sheet retreated, the land began to rise and the elevations of waterbodies changed. A barrier formed at Pihtsusköngäs that prevented species arriving after the Arctic char from making their way into these waters. Indeed, waters above Pihtsusköngäs today only contain a single fish species: the dwarf Arctic char. 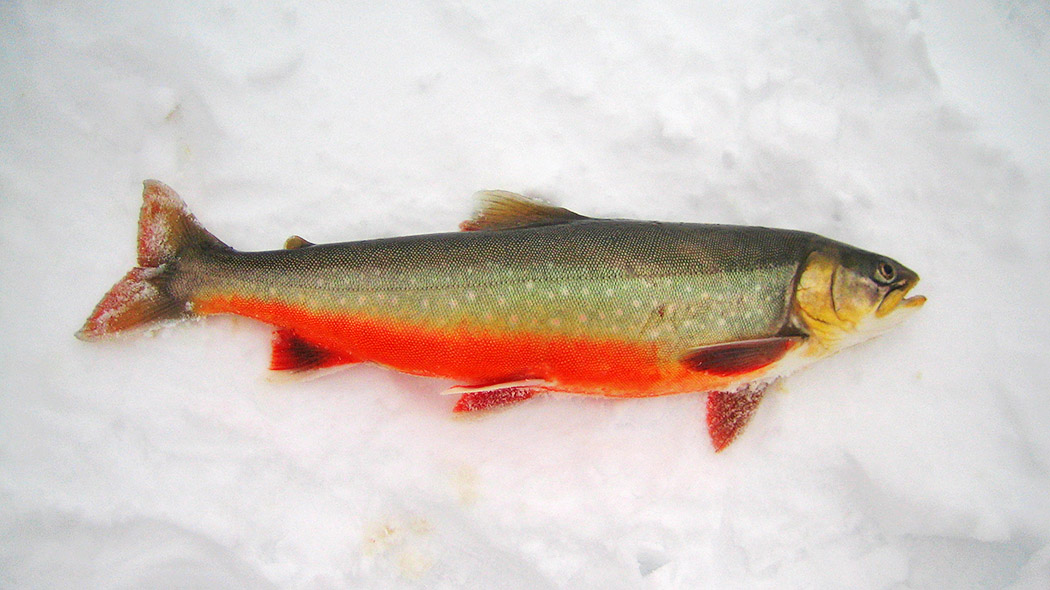 A former resident of Lapland, the Arctic fox, is today an extremely rare sight in Finland. Arctic foxes have not managed to den in Finland since 1996. In neighbouring countries, there are only a few hundred individuals. In recent years, there has been a slightly positive trend in their numbers. Nordic researchers are working together to save the Arctic fox. 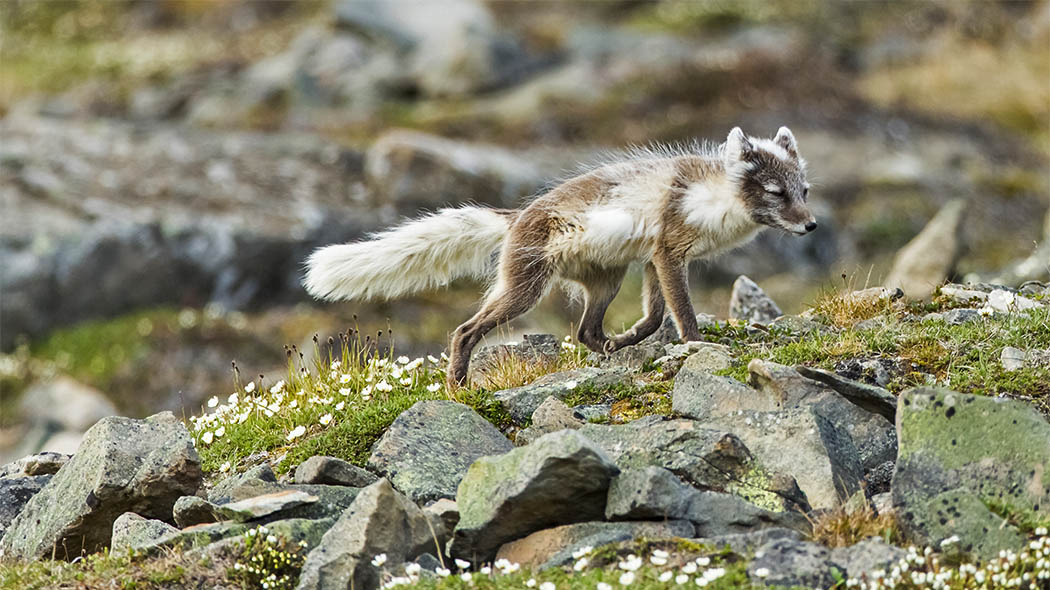 The original habitat areas of the Norway lemming are also found in the Käsivarsi region. Norway lemming leave the shelter of their snowbeds to migrate, with some reaching as far as Rovaniemi. The last recorded migration of Norway lemming was in 2011. It has been 41 years since the last major migration. The disappearance of Norway lemming over the decades seems to also have played a role in the decline of the Arctic fox.