The History of the Langinkoski Imperial Fishing Lodge

Langinkoski Rapids have been a famous place for fishing for centuries. For example, the Kyminkartano Manor and the Valaam Monastery had a fishing place there. Emperor Alexander III of Russia became infatuated with the place and wanted to have a fishing lodge built at Langinkoski, which the imperial family visited several times. The fishing lodge, which was completed in 1889, is today the only preserved building outside Russia that was owned by the Emperor.

Salmon and whitefish had been fished on the rapids of the River Kymi for centuries before the days of imperial glory. Due to land uplift, new rapids formed at the mouth of the river in the 15th century. Today they are known as Langinkoski Rapids. In the Middle Ages, the rapids belonged to the Kyminkartano Manor, and rudimentary dams were used for fishing. In the mid-1500s, King Gustav Vasa of Sweden ordered that fishing on the River Kymi be modernised, and several fishing places owned and maintained by the Crown were established along the river.

Langinkoski Rapids have also had other Finnish names: Pirkonkoski (‘Pirkko's Rapids') and Myllykoski (‘Mill Rapids'). The name Pirkonkoski dates back to the Middle Ages, when the rapids were in the possession of a Swedish Bridgettine Monastery and they were named after Saint Birgitta. The name Myllykoski originates from a mill that operated on the eastern bank of the rapids in the 16th century. In the 17th century, people started to call the place Langinkoski after its local owner, Mårten Eriksson Lång. 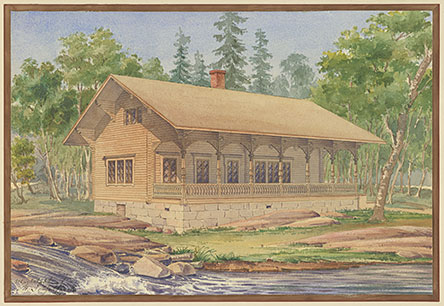 Fishing Ground of the Monks

Langinkoski was part of the area that Sweden ceded to Russia in accordance with the Treaty of Åbo signed between Russia and Sweden in 1743. A half a century later, Tsar Paul I of Russia gave the Valaam Orthodox Monastery the exclusive rights to fish on the rapids. However, this caused disputes, and eventually the villages of Lankila and Ruonala received their share of the fishing grounds.

In the early 19th century, the monks built a small chapel on an island located in the middle of Langinkoski Rapids. At the beginning of the fishing season in the spring, the monks blessed the fishing waters by uttering prayers and swinging a censer to spread smoke and myrrh. However, the monks took some liberties and did not comply with the rules set for fishing. In order to put an end to the numerous disputes, the autonomous State of Finland offered to buy the fishing rights from the monks. In 1847, the Emperor gave the rapids to the State of Finland, which leased the fishing rights to Sergei Druschinin, a Russian-born merchant.

The Russian crown prince Alexander visited Langinkoski for the first time in 1880 with his consort, the Danish Princess Dagmar, who became Maria Feodorovna following their marriage. After ascending to the Russian imperial throne, Alexander III visited Langinkoski again. He was infatuated with the place and expressed a wish that a fishing lodge be built for him at Langinkoski Rapids.

The Emperor's wish came true. Architect Magnus Schjerfbeck prepared the drawings of the fishing lodge, and architect Johan Jacob Ahrenberg was in charge of interior design. Compared to the imperial court, the lodge was simple and intended for summer use only. Langinkoski was the Emperor's refuge, where he withdrew from the luxury and formalities of the court. The interior and items in the lodge offered Finnish applied arts and industry an opportunity to present their products. The textiles were made by Tampella, the dishes by Arabia, and the glasses were blown at the local Karhula glassworks.

The fishing lodge was inaugurated in a grand ceremony on 15 July 1889. Local residents brought flowers and sang. When the Emperor came onto the veranda, a 30-gun salute was fired. In the evening, a banquet was held on the imperial yacht, during which the Emperor raised his glass to toast Finland. The imperial family enjoyed great popularity in Finland.

Alexander visited Langinkoski almost annually. He liked to spend time in the countryside. The river bed was equipped with steel nets and bars to prevent salmon released into it from escaping so that the Emperor could catch them. The Empress, who was known as a sweet and gentle person, sometimes wanted to prepare lunch herself. In the evenings, there were meals, bonfires, firework displays, music and salutes, and sometimes trips were made with horses. The Emperor had three professional fishermen. They came to Langinkoski in May every year and returned home to the Tver government after the fishing season.

Alexander and his family visited Langinkoski for the last time on 21 and 22 July 1894. After returning home, the Emperor learnt that he had nephritis. He did not recover from the disease, but died at the end of the same year. A memorial stone was erected at Langinkoski to remember the Emperor.

During the First World War, the fishing lodge served as a convalescent home for wounded Russian soldiers as the dowager Empress had suggested. Russians also built a base at Langinkoski, with trenches, firing nests and dugouts. Some trenches are still to be seen, but the other structures have disappeared over the years. 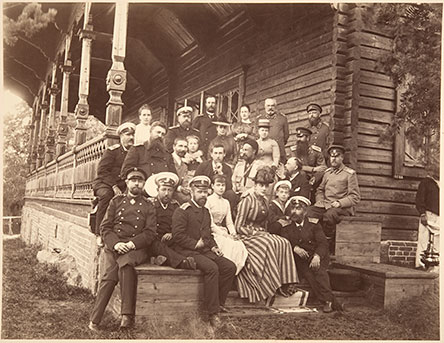 The Era of Independence

In 1917, the disorder in Russia also affected Langinkoski. The bronze trimmings of the Emperor's memorial stone were ransacked, and rebellious soldiers vented their anger on the stone. A Russian private perhaps detonated a hand grenade against it. However, the memorial stone may also have been destroyed in later clashes or during the blasting relating to fortification works. The caretaker of the fishing lodge managed to hide most of its movables. During the Finnish Civil War in April 1918, a unit of the Kotka Red Guards settled at Langinkoski. However, they soon fled as the Whites and Germans advanced.

When Finland became independent in 1917, Langinkoski was taken over by the State of Finland. The Imperial Fishing Lodge soon fell into decay, and some people regarded it as a humiliating reminder of the Russian era. The lodge would probably have been destroyed, unless the Kymenlaakso Museum Society (now the Langinkoski Society) had started to restore it. The lodge was opened as a museum to the public in 1933. Many items had been removed from the lodge, but a considerable proportion of them have been traced and returned to the museum.

Fishing was practised on the rapids first by the state and then by companies that leased the rapids from the state. After the power plants on the upper reaches of the river were completed in the 1920s, water volumes decreased and the importance of fishing declined. Fortifications were also built at Langinkoski as part of the Kuusankoski–Kouvola–Anjala–Kotka line during the Winter War and the period of the Interim Peace.

The Langinkoski Park was declared a nature reserve in 1960. Today the area is managed by Metsähallitus Parks & Wildlife Finland. Read more about current fishing options in the area on the Eräluvat.fi website (eraluvat.fi).