History of the Svartholma Sea Fortress

The Svartholma Sea Fortress was built in the mid-1700s to secure the new eastern border of the Kingdom of Sweden – it was the sister fortress of Suomenlinna, originally called Viapori, "the southeastern stronghold" and an integral part of the realm's facade to the east. Svartholma's history reflects the end of Swedish reign in Finland. The fortress ended up in the hands of the Russians and Finland fell under the rule of the Russian Imperial Government. In the end, the British navy blew up Svartholma during the Crimean war.

Establishment and Structure of the Sea Fortress 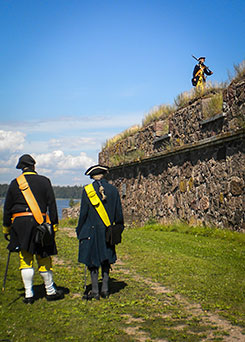 During the wars of the early 1700s, Sweden lost the eastern parts of the kingdom, and  their fortifications, to Russia, and was unable to reconquer them. After the Russo–Swedish War of 1741–1743, known as the Hats' War, defence of the eastern border became urgent. It was decided that a fortification would be built in Degerby in Pernaja, 10 kilometres from the eastern border, alongside a staple, i.e. a city with special merchant rights - these days known as Loviisa.

Construction in Degerby began in 1748. The fortification system was to comprise two fortifications, one on land and the other at sea, and the two would complement each other. The land fortification in Loviisa remained unfinished, however, as Sweden became involved in the Pomeranian war and resources became scarce. Construction of the sea fortress made faster progress, with four bastion forts, four-sided gun posts, and connecting curtain walls being constructed alongside other buildings, such as a bakery and warehouses. The size of the main fortress was approximately 120 x 120 metres.

The construction work was led by fortification officers and the labourers included members of infantry regiments and navy privates. Convicted prisoners assisted, while qualified craftsmen were hired for tasks requiring special skills. The builders worked 12 hours a day, six days a week.

The building sites of the Loviisa and Svartholma fortifications and, later on, the Svartholma garrison boosted local trade, industry and business. The officers at the fortification were a welcome addition to the social life of the young town and surrounding country manors. Because Svartholma was so important, even the Swedish kings visited the fortification.

At the same time, Viaborg, currently known as Suomenlinna, was built just off Helsinki. It became the most important sea fortress in Finland. Svartholma, however, was the second most important fortress defending the coastline and became the easternmost base of the archipelago navy, established in the 1750s.

Siege of the Fortress

Svartholma fortress has no great military achievements to boast of. The first occasion on which Svartholma fell under the threat of attack by the Russians was during the coup to install King Gustav III in 1772. In the end, the international political tensions were relieved without a military confrontation.

During Gustav III:s war against Russia in 1788–1790, Svartholma fortress was not involved even though the front was only 10 kilometres or so to the east. Russian naval divisions avoided the Degerbynlahti bay in order to remain beyond the reach of the guns in Svartholma, sailing along the coastline all the way to Hanko.

After the war, the Russians built the Ruotsinsalmi sea fortress off the mouth of the river Kymijoki, as well as the Kyminkartano land fortress. This meant that there was a significant sea fortress on both sides of the border. However, when the Finnish War broke out in 1808 Svartholma was poorly equipped and its shoreline defences were incomplete. Its armaments were weak, as only a third of the required number of guns were in place and most of its small arms were not in working order. Food supplies were deficient and the fortress' well was poorly managed. The sick bay was very small and also poorly run. As more reinforcements were transferred to the fortress, the total number of men climbed to around 700. Women and children who resided in the fortress were sent away.

The Russians crossed the border only a week after the outbreak of the war and conquered Loviisa without a fight. They began to prepare the siege of Svartholma. Fearing large losses, the Russians abandoned a direct attack over the ice. Approximately 3,000 Russians besieged the fortress and attempted to starve the garrison into submission. The besiegers focussed on negotiations and psychological warfare rather than military action. For instance, they made tempting offers to the officers defending the fortress.

The Russians fired their guns only occasionally. The resulting damage was minor, including only a few broken windows and a fallen chimney. This proved decisive, however, as the buildings could no longer be kept warm and the winter was freezing. The defenders' situation was made worse by the fact that the guns in the fortress did not fit the embrasures properly, making it impossible to counter the Russians' gunfire. The willingness to defend the castle quickly evaporated as provisions and drinking water became scarce, medication ran out and an increasing number of men fell ill. As the officers' will to fight declined, Sergeant Major Edlin initiated a mutiny to usurp the officers who were planning to surrender. The mutiny was suppressed and Edlin was sentenced to death, but was pardoned later.

The Russian Era and the Destruction of the Fortress

The Finnish War ended with the Treaty of Hamina in 1809 and Finland became part of the Russian Empire. Svartholma lost its significance as a border fortress and was used as a prison and work colony. Before the Crimean War, in the 1850s, Russia began to plan fortifications at Svartholma. The fortress could not, however, be made fit for defensive purposes and the decision was made to abandon it.

A British-French naval fleet sailed into the Gulf of Finland in March 1855 and anchored at Svartholma in July. On the following day, the British blew up the fortress. Time stood still on the small fortress island of Svartholma. By a twist of fate, a fire broke out in Loviisa the next day and destroyed the town. This had a major influence on the fate of the fortress. Demand for building materials was soon high and the townspeople were given permission to use the destroyed fortress for this purpose. The fortress was rapidly dismantled, stone by stone and brick by brick. The island gradually became a town pasture.

Svartholma was still a fairly young ruin when it was protected as an antiquity in 1883, alongside other ruined castles and fortresses. In 1937, the city of Loviisa began to clear the island by repairing the walls of the fortress.

In 1962, the systematic excavation and restoration of the Svartholma fortress began. As early as in 1963–1964, the ruins of the buildings on the western and eastern sides of the main fortress' inner courtyard were revealed. Excavation of the ruins continued until the early 1970s, and restoration work until the 1990s. The cobbles on the main castle yard were restored to form an impressive sight for visitors today. In 1993, the National Board of Antiquities's antiquities management unit performed further clearing work on the fortress. Today, Metsähallitus Parks & Wildlife Finland administers the site and the City of Loviisa is in charge of managing it.