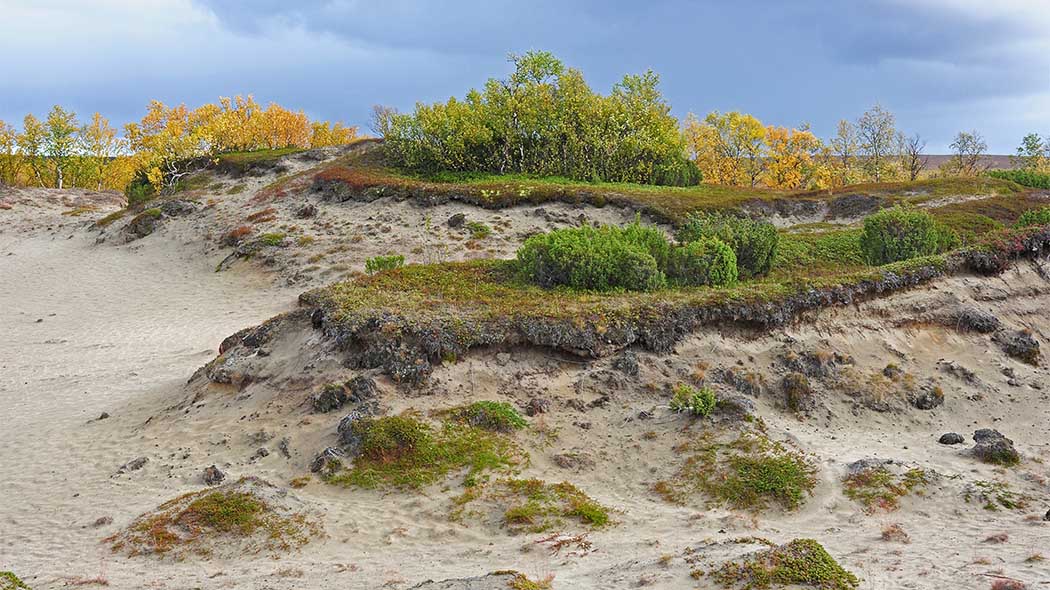 The natural features and landscape of Pöyrisjärvi Wilderness Area change as one travels from the southern boundary northward. The area's south boundary is mainly covered by dry pine forests, but just a few kilometres north of there birch is the dominant tree type. On the other side of Lake Pöyrisjärvi in the northern part of the wilderness area there is a vast area of treeless fell tops.

The wilderness area's sand dunes are one of the area's most interesting natural sights. There are dunes in several parts of the area, but most of them are on the north side of Lake Pöyrisjärvi. Pillar-like junipers and even fell birch grow on the sandy plains around the dunes.

There are several long sets of ridges in the wilderness area. The grandest of these are a set of ridges stretching almost continuously from Lake Näkkäläjärvi to Lake Pöyrisjärvi on towards Maaterlompolo and finally into Suomajoenlaakso River Valley and the ones in the east part of the area, which follow the Suukisjoki and Käkkälöjoki River Valleys. These huge ridges are usually hundreds of metres wide and have level tops. They are mainly made up of coarse and fine sand.

Vast mires make up a large part of the wilderness area. Pöyrisvuoma in Pöyrisjärvi Wilderness Area is one the largest mires in the municipality of Enontekiö and one of Finland's most valuable palsa bogs. Palsa bogs are mires, which have frost mounds that stay partially frozen even during summer. There are several frost mound areas at Pöyrisvuoma, which are generally around 2 km long and at their widest 1 km wide. There are around 50 frost mounds in this palsa bog area.

Pillar-like Juniper (Juniperus communis), Black Crowberry (Empetrum nigrum subs. hermaphroditum), and Lingonberry (Vaccinium vitis-idaea) are among the plant species that grow on the sand dunes in Pöyrisjärvi Wilderness Area. In autumn the bright red-leaved Bearberry (Arctostaphylos alpina) is one of the easiest species to recognise in the dunes. Different types of lichen, such as Green Reindeer Lichen (Cladina mitis) and Cetraria ericetorum , also grow there. 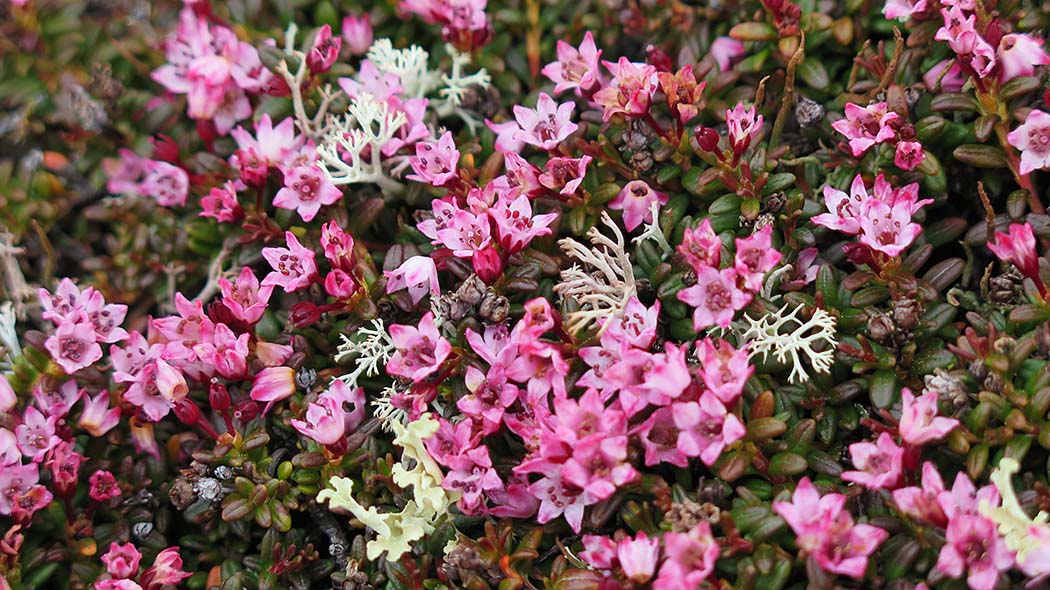 The vegetation of the tree-less fell tops of Pöyrisjärvi Wilderness Area is diverse. There are abundant patches of black crowberry near the timberline. Higher up you can find Alpine Clubmoss (Diphasiastrum alpinum) and if you are vigilant you may spot some Moss Heather (Cassiope hypnoides). On top of the fells and on their wind-whipped slopes you can find a creamy white lichen called Cetraria nivalis, Alpine Azalea (Loiseleuria procumbens) and Lapland Diapensia (Diapensia lapponica).

The meadows on the river banks in the wilderness area have high grass and scrubs and the vegetation there is more lush than in other parts of the area. Some plants found in the meadows are the Wood Crane's-bill (Geranium sylvaticum), the Meadowsweet (Filipendula ulmaria), the Melancholy Thistle (Cirsium helenioides) and the very demanding Variegated Horsetail (Equisetum variegatum).

The most bird-rich areas in Pöyrisjärvi Wilderness Area are the mires. Of the 29 wader species found in Finland, 21 are present in the wilderness area. The Ruff (Philomachus pugnax), the Common Snipe (Gallinago gallinago) and the Wood Sandpiper (Tringa glareola) thrive in the very wet mires. Waders found in the dryer mires are the Eurasian Golden Plover (Pluvialis apricaria) and the Common Ringed Plover (Charadrius hiaticula). Passeriformes found in the mires are the Meadow Pipit (Anthus pratensis), the Yellow Wagtail (Motacilla flava) and the Lapland Longspur (Calcarius lapponicus). The Common Redpoll (Carduelis flammea), the Bluethroat (Luscinia svecica), the Brambling (Fringilla montifringilla) live in the meadows in the centre of palsa bogs. 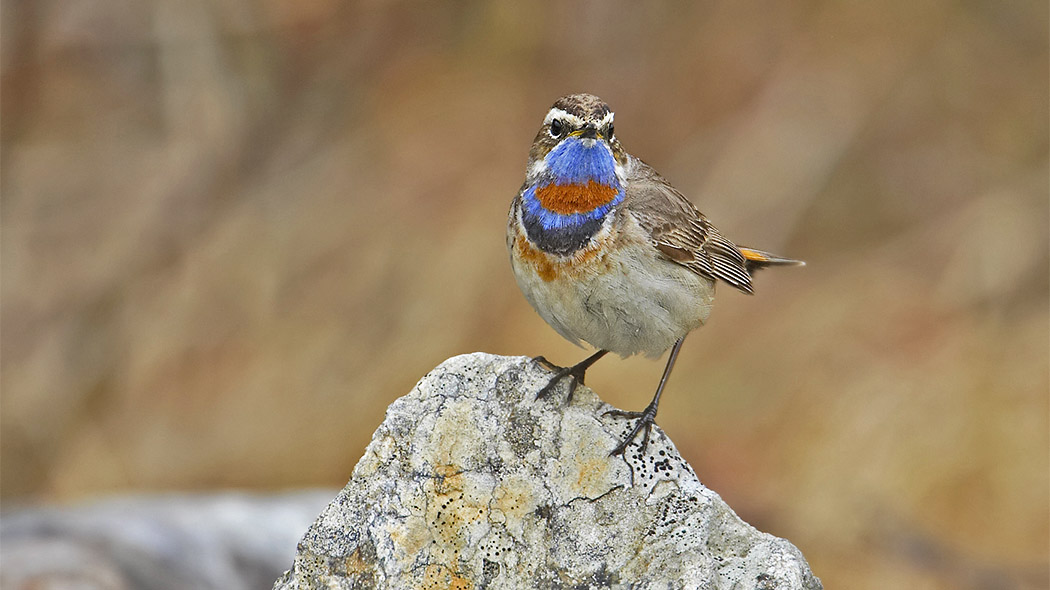 Seventeen different species of water birds have been spotted in Pöyrisjärvi Wilderness Area. Along with the basic Anatidae (ducks, geese and swans) the Long-tailed Duck (Clangula hyemalis), Black Scoter (Melanitta nigra) and the Smew (Mergus albellus) also inhabit the area. The Whooper Swan (Cygnus cygnus) can be spotted when they are searching for food, but their nest tend to be in the parts of mires which are most difficult, if not impossible, to get to on foot. As you rise up the fells there are far fewer birds. On the tops of fells you can spot the Snow Bunting (Plecttrophenax nivalis), the Rock Ptarmigan (Lagopus mutus) and the Dotterel (Charadrius morinellus) and keeping watch on ledges the Rough-legged Buzzard (Buteo lagopus). Some years the Snowy Owl (Nyctea scandiaca) visits the area.

Most of the birds in Pöyrisjärvi Wilderness Area are migrating birds. As winter nears birds set off little by little for the south and only those species, which can withstand the harsh artic winter, stay behind. Some species that stay in Pöyrisjärvi for winter are the Three-toed Woodpecker (Picoides tridactylus), the Willow Tit (Parus montanus), the Siberian Tit (Parus cinctus), the Siberian Jay (Perisoreus infaustus), the Willow Grouse (Lagopus lagopus) and the Rock Ptarmigan (Lagopus mutus). The forests are very quiet in winter when the migrating species have left.

The rarest mammal in Pöyrisjärvi Wilderness Area is the Arctic fox (Alopex lagopus). Its habitat is limited to the fells around Enontekiö and Utsjoki. Only a few individuals live in Finland. More common than the Arctic fox are the lynx (Lynx lynx), the wolverine (Gulo gulo), the wolf and the bear, although they are quite scarce as well. The most common small predators in the area are the least weasel (Mustela rixosa), the stoat (Mustela erminea) and the mink (Mustela vison).

The small mammals inhabiting Pöyrisjärvi are those typical of all of Fell-Lapland. Vegetation plays an important part in how abundant mammal species populations are. The lusher an area is the larger the small mammal populations are there. The tundra vole (Microtus oeconomus) and the grey red-backed vole (Clethrionomys rufocanus) are common in the area while the populations of the water shrew (Neomys fodiens) and the pygmy shrew (Sorex minutus) are much smaller.