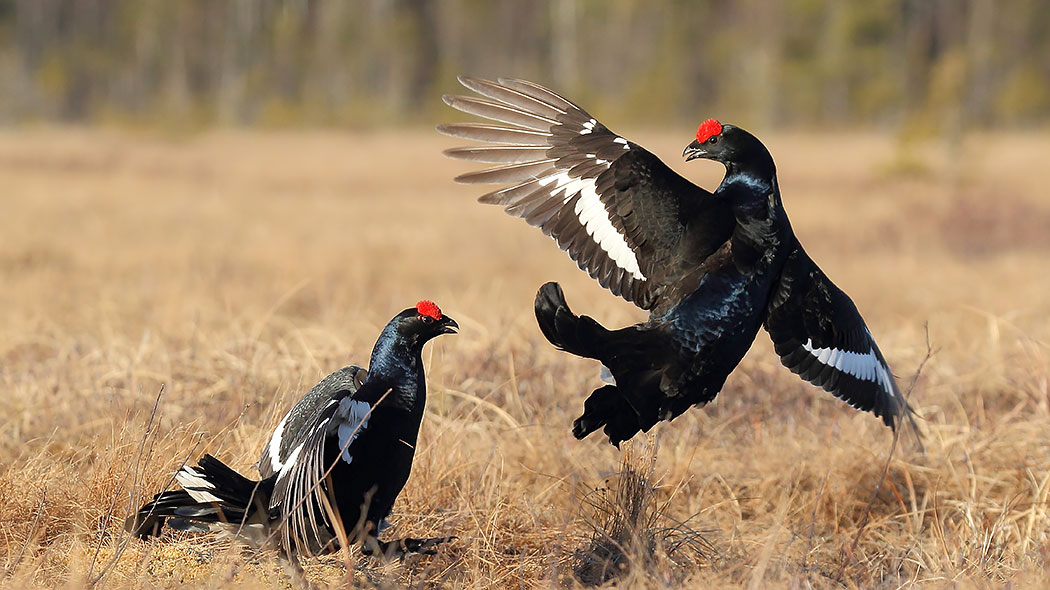 The untouched nature of Valkmusa National Park is at its liveliest in spring time. Nature that is coloured by peat moss is a heaven for many bird and butterfly species. 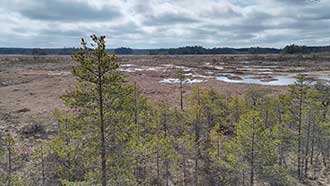 Experience the ever-changing colours of the mire. As many as 45 different types of wetlands have been found in Valkmusa! Read more > 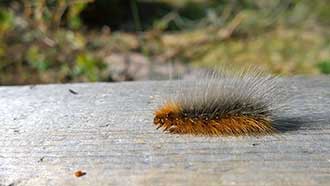 Watch your step! You might encounter unexpected travellers, like the larvae of a garden tiger moth (Arctia caja) or a cheeky lizard. Read more > 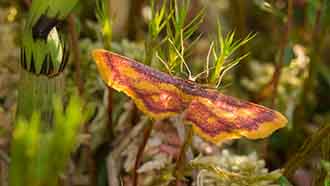 The Idaea muricata moth is the regional emblem of the National Park. This handsome moth blends skilfully into the mire environment. Read more > 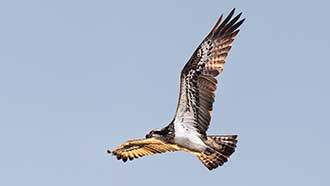 You can see a long way from the viewing platform at Simonsaari. A majestic pair of western ospreys soar impressively over the mire. The call of the common curlew carries far. Read more > 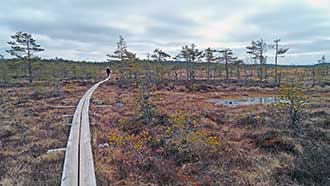 There are no waste bins in the national park - please take your rubbish with you. A true hiker takes others into account and leaves no traces behind! Read more >

More than 40 types of mire habitats have been found within the National Park, which is an exceptionally abundant amount for Southern Finland. The natural features of the mires are considered internationally as valuable. The edges of these mires have for the most part remained in their natural state. 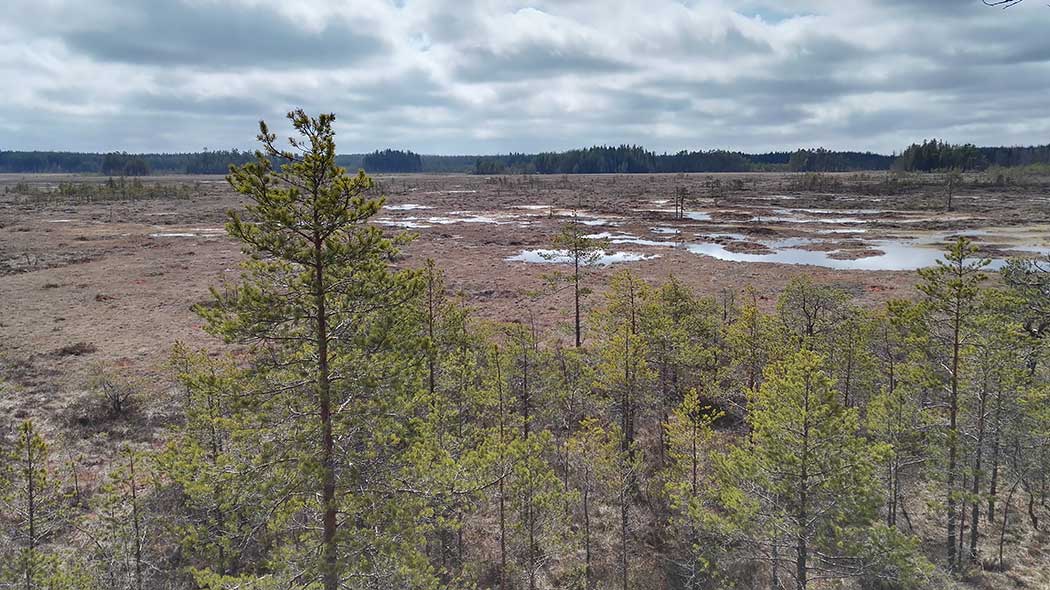 Munasuo Mire is Finland's largest coastal hummocked raised bog. Raised bogs are thick-mossed and barren bogs with a centre that is higher than their edges. At the edges of Munasuo Mire there are wet mires with peat moss, spruce mires and pine mires.

Kananiemensuo Mire has retained its wilderness-like atmosphere. It is a mix of many different mire types, which blend to form an impressive whole. Clearly visible in the mess are two raised bogs and one aapa bog. The centre of the mire is very damp. 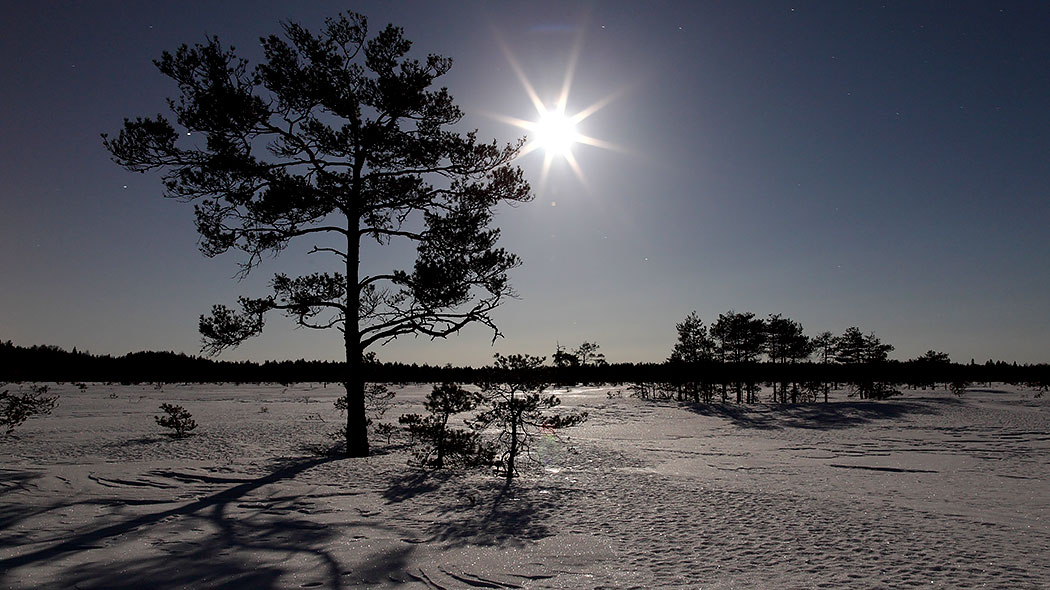 Many rare and threatened butterfly and moth species inhabit Valkmusa National Park. For example the park's emblem specie the Purple-bordered Gold Moth (Idaea muricata) is threatened and only lives in Southern Finland's coastal mires. Most butterflies and moths that inhabit the mires are most active at twilight or at night. 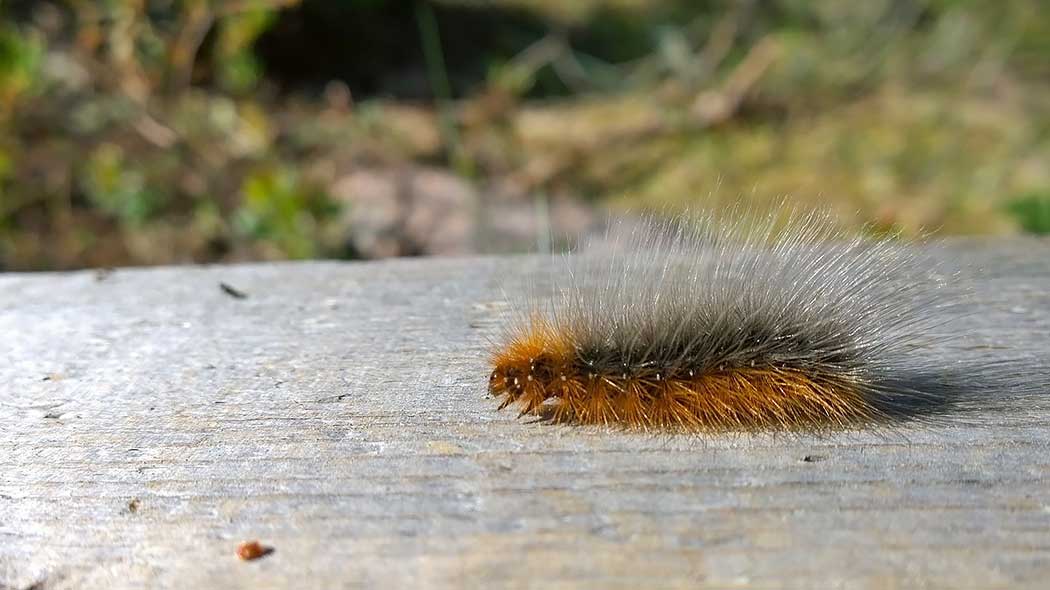 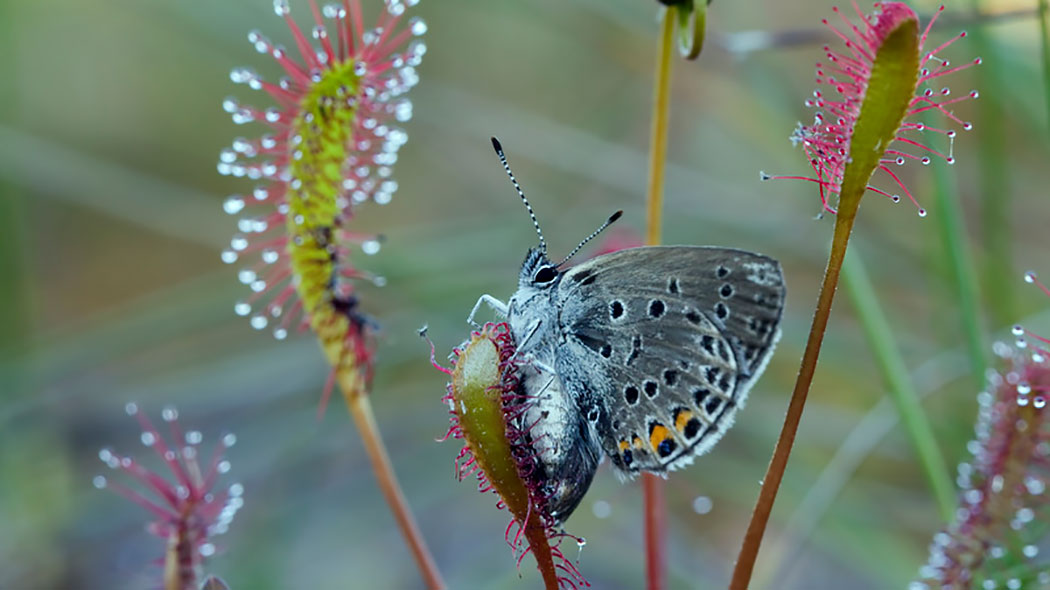 The Idaea muricata is a small moth with a wingspan of 18–20 mm. Their flight season starts around mid-summer and lasts for a month. The purple-bordered golds usually fly at dusk but sometimes also during the day and on warm summer nights. A passing hiker can sometimes spot them darting out of their way. Their beautiful yellow-purple colouring blends in perfectly with the colours of the peat mosses and other mire plants. The Idaea muricata was chosen as Valkmusa’s regional emblem because its occurrence in Finland is limited to the coastal area mainly in the south. The Idaea muricata is a rare species of moth and has been classified as endangered in Finland. 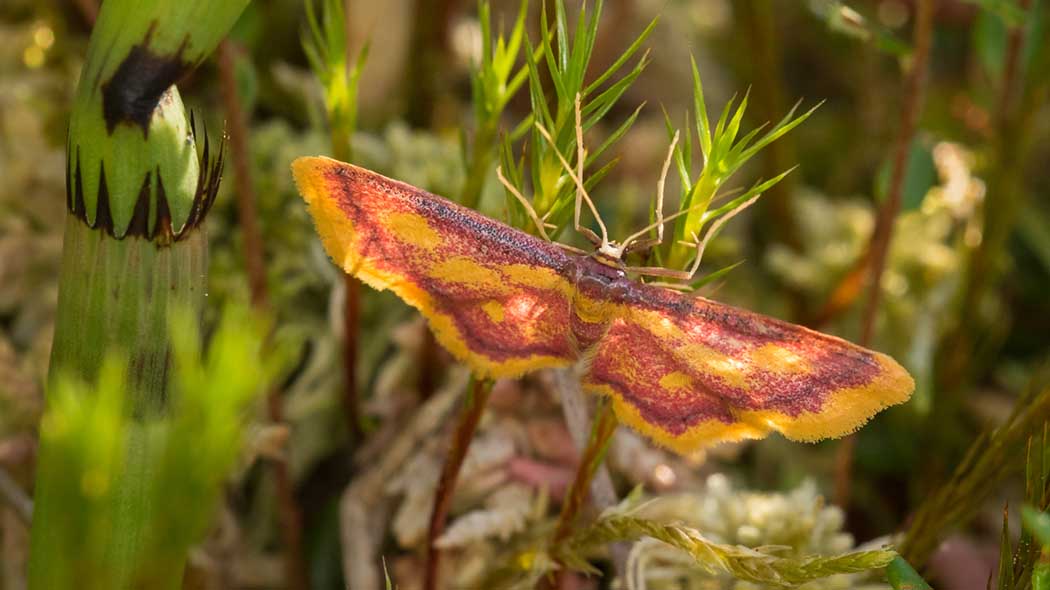 The Valkmusa National Park is favoured by western ospreys. The osprey is a large and spectacular bird of prey that eats almost exclusively fish. As many as six pairs of ospreys nest either in the National Park or around its edges. 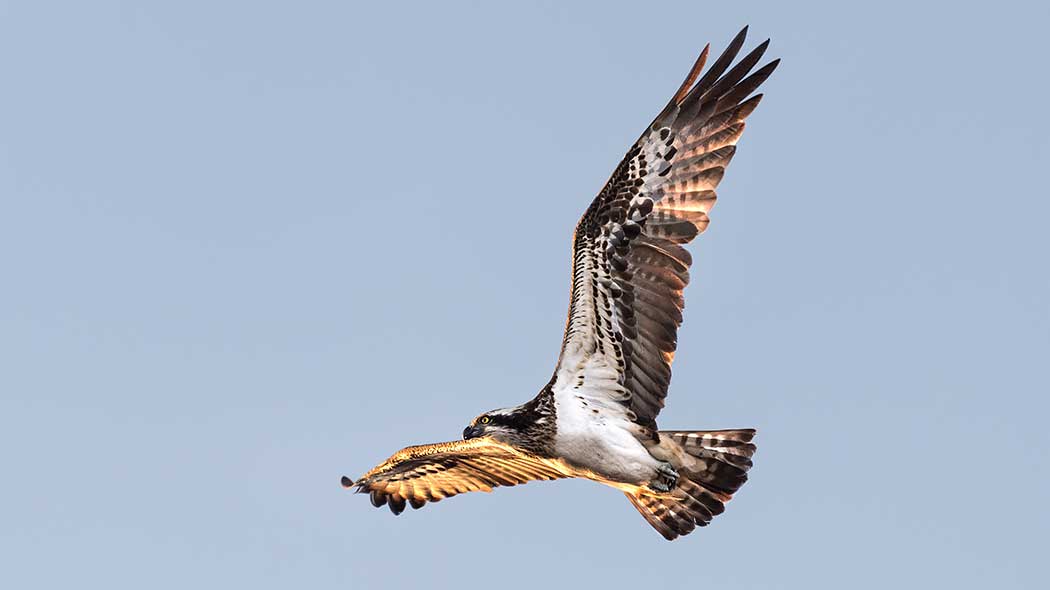 When selecting the location of its nest, the osprey prefers peaceful environments with open views, but it is prepared to fly long distances in search of food. This is particularly evident in Valkmusa where there is a large osprey population even though the closest fishing grounds are many kilometres away! This means that every meal that is delivered to either an incubating spouse or hungry offspring has been picked up from several kilometres away. This however is not a problem for the osprey as they are well accustomed to flying. Each year the ospreys of Valkmusa fly to southern Africa for the winter months, only to return again to the same places to nest. During the breeding season it is easy to hear and spot an osprey from the board-walks of Simonsaari.

Nesting and resting areas for the birds

The mires of Valkmusa National Park are known for there abundant amount of bird species, some of which are rare or threatened. Birds, which nest in the park, range from those that are common on the coast like the Common Redshank (Tringa totanus) and the Common Pochard (Aythya ferina) to those that more familiar in the north such as the Whimbrel (Numenius phaeopus). The Osprey (Pandion haliaetus) and Common Crane (Grus grus) also nest in the area. The park provides a peaceful place for cranes and geese during migration season. 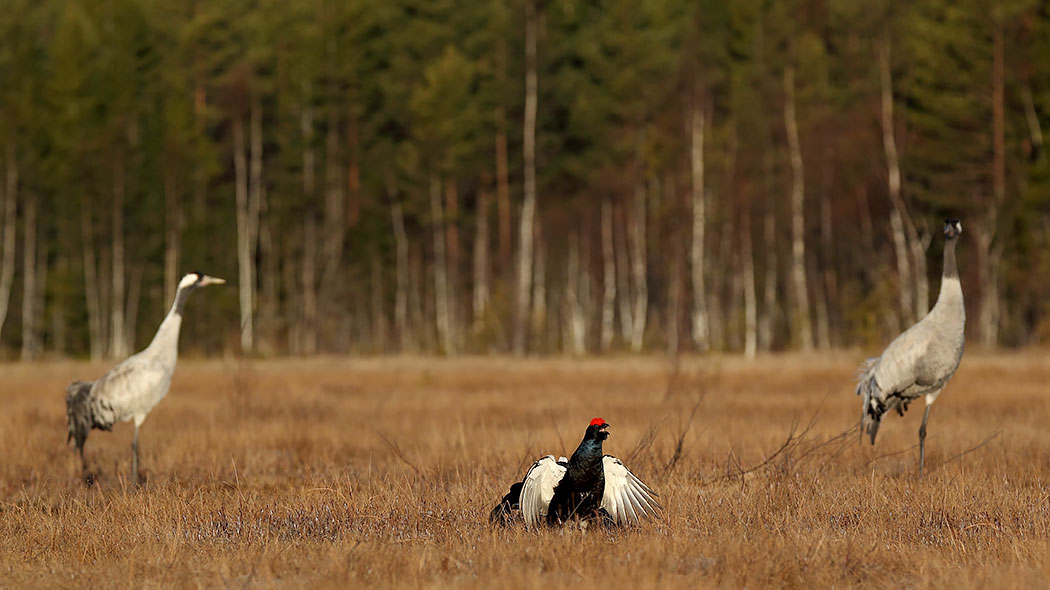