Sights and History of Hiidenportti 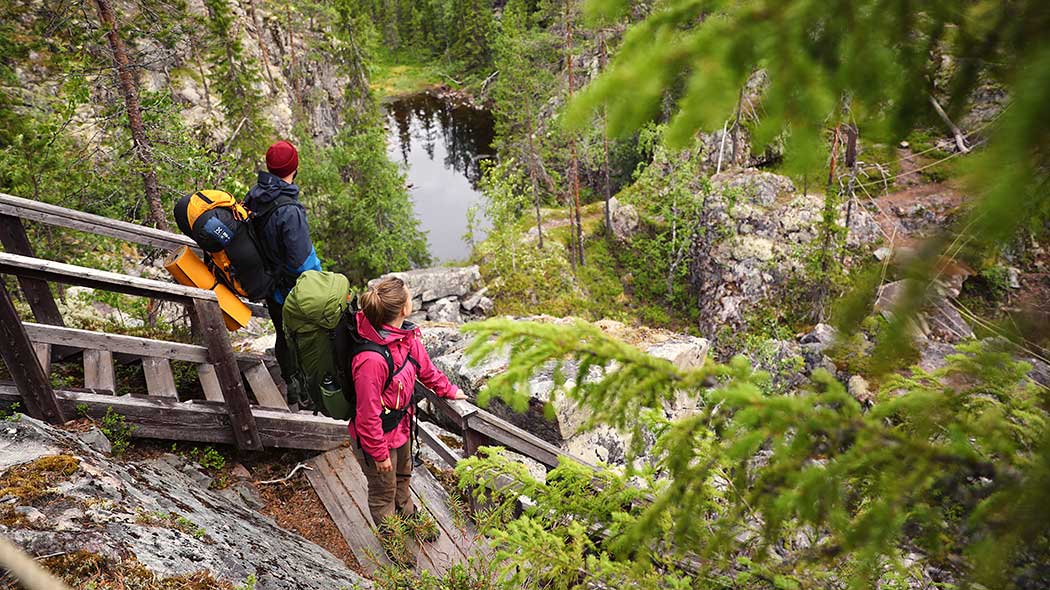 The Hiidenportti gorge with its vertical rock walls is the National Parks best known tourist sight. The gorge is located just under 1,3 km from Palolampi information point. 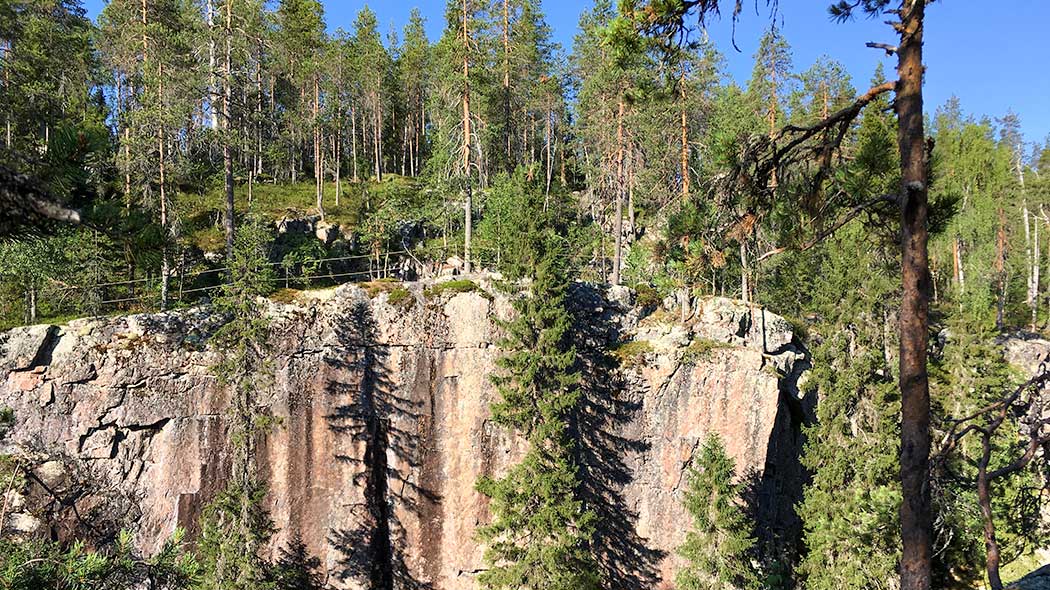 The grounds of the deserted Kovasinvaara Croft in the middle of heritage landscape have remnants of the past to give visitors a picture of how people in the area used to live. 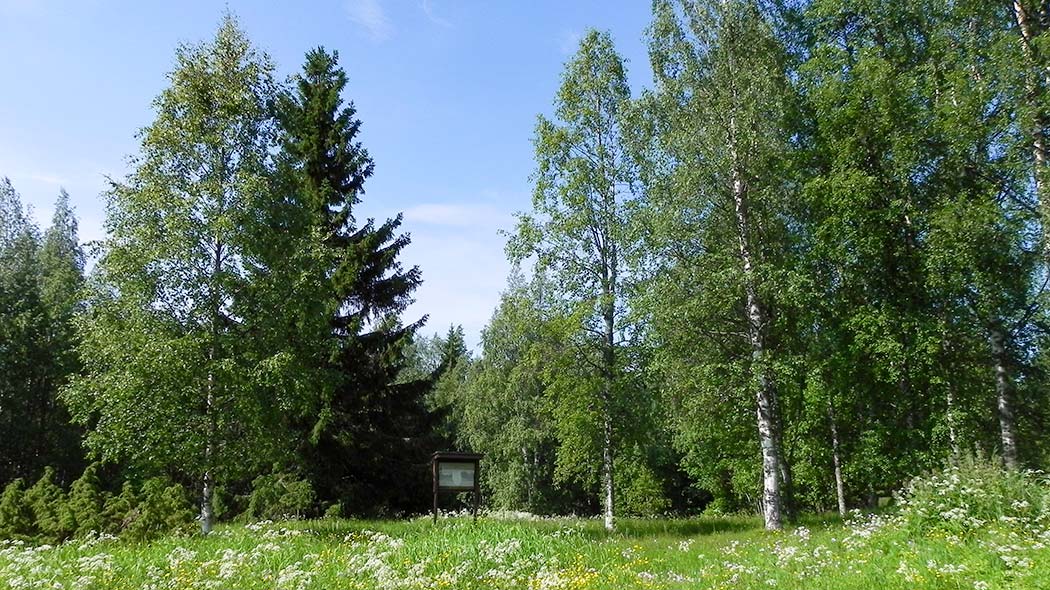 Hiidenportti National Park is rich in cultural history. Besides the Kovasinvaara croft there can be found traces of tar burning, slash-and-burn cultivating, logging, floating and hiding places.
Many of the sights can be seen along the 3 km long Hiidenkierros Trail. Remains of the loggings and floating are still seen in some places along the Porttijoki River.

Most of the historical points are situated by the hiking trails, but some of them are outside the trails. The rich cultural history of the area is also presented in a booklet "Hiidenportti Through the Ages" (julkaisut.metsa.fi). The booklet can be found free of charge at Kuhmo Visitor Centre Petola. 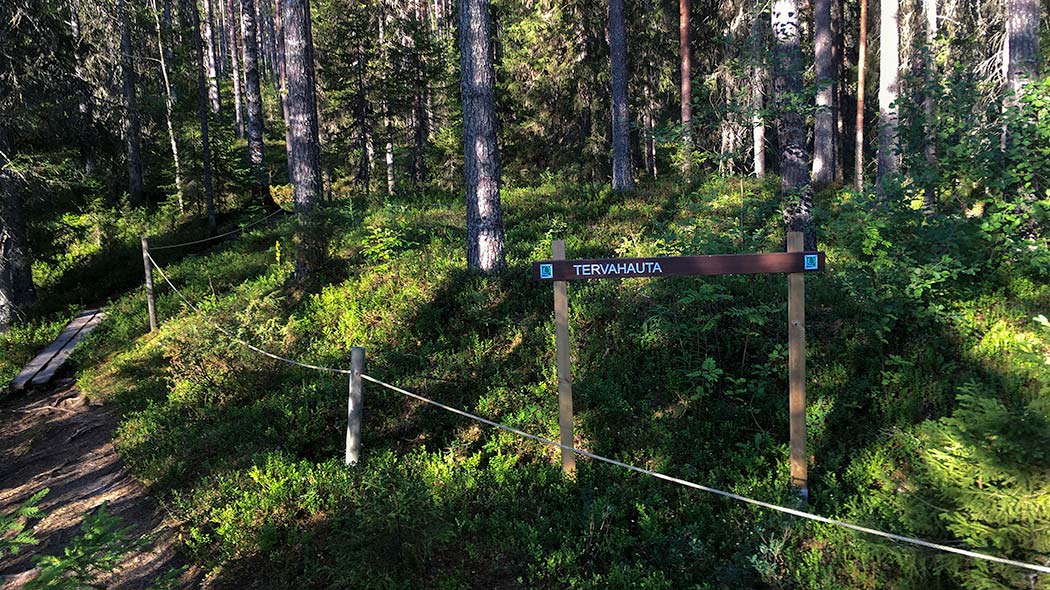 Hiidenportti was formed when the earth's crust folded. Later on, ice ages moulded and smoothed out the earth’s surface. When the continental glacier melted 10,000 years ago the water formed the Sotkamo Ice Lake, which pushed its way through Hiidenportti Gorge towards the southeast.

When the melting glaciers formed rivers, they sifted earth types, thus forming ranges of ridges at both ends of Porttijoki River Valley. The northwest ridge runs towards the centre of the municipality of Sotkamo, and the southeast one reaches into North Karelia.

At its deepest the sheer rock-face drops even 20 metres. The length of the gorge valley is about 1 kilometre.

Before Christianity spread through Finland, the Finns worshipped the gods of nature. The place of worship was called a “hiisi”, a holy grove, where people gathered to offer sacrifices to the great gods of the forest. The meaning of “hiisi” changed in the 17th century as Christianity regarded all other gods as pagan and originating from the Devil. Hiisi thus came to mean an evil place or the Devil itself.

According to a Finnish myth a demon called Hiisi lived on Vuokatinvaara Hill in Sotkamo municipality. He was horrified when he heard church bells ringing in Sotkamo, and in a fury, he first tried to throw two large rocks at the church but missed it. Disappointed, he gathered his livestock - wolves, bears, wolverines and lynx - and moved to the backwoods of Hiidenportti (Hiisi's Gate), where the sound of rumbling church bells did not carry from any direction. According to tales the ominous round pools at the bottom of Hiidenportti Gorge are Hiisi's eyes. 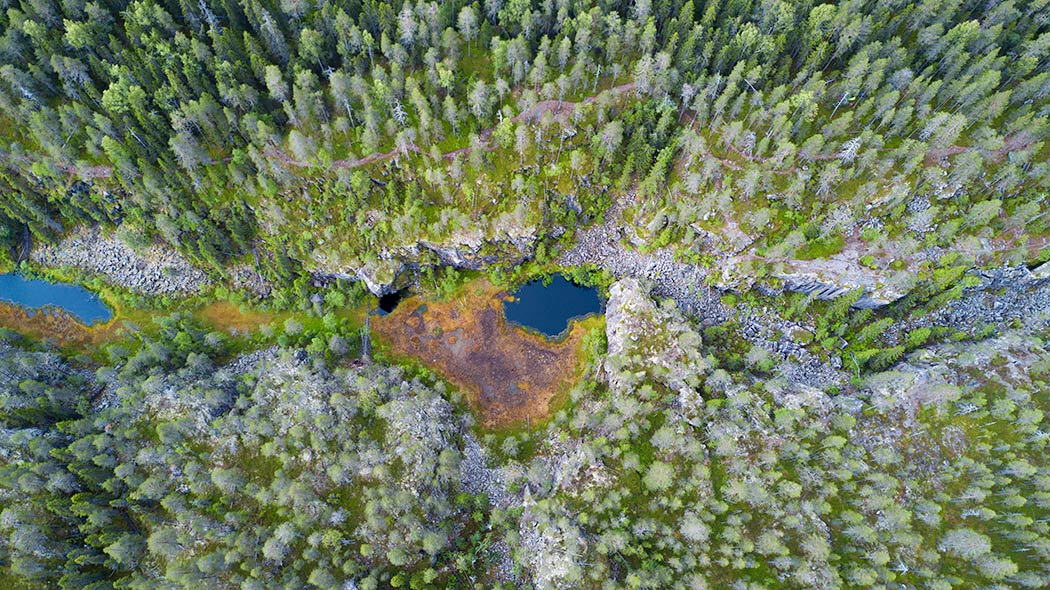 Maybe because of the beliefs of Hiisi living in Hiidenportti, the region was an unknown and avoided area for a long time. An old story tells how Hiidenportti Gorge was found:

It was a time of hostilities and wars. The foemen had built a hiding place in Porkkasalo and kept coming and robbing the nearby villages. They captured a 15-year-old girl from Sotkamo and made her their slave. Once, the girl asked the mistress in which direction the city of Oulu might be. The woman replied that the sun rises in Russia and sets in Oulu. On a clear spring night, the girl stole a pair of shoes and ran away towards the sunset. She came to a scary gorge but continued along it and finally found the way home. The men of the village started off on a revenge mission the very same night. Following her instructions and traces, they found the gorge and the robbers’ hut. The hut and the foes were destroyed to the last man.

The backwoods and other wilderness-like areas of Hiidenportti National Park were in the past distant hunting lands. The discoveries made in the Hiidenportti area - hunting pits, bits of household items and splinters of quartz - reveal that the Porttijoki River Valley has served as a passage and hunting area ever since prehistoric era.

With the spreading settlements, there was a spread of slash-and-burn farming, which provided new land for cultivation. The principle was, that the trees were felled and burned, and the seeds planted in soil fertilised with ash. The slash-and-burn farming wasted forests but also diversified our nature. The former slash-and-burn clearings can still be seen in Kovasinvaara’s birch forests.

Tar burning and slash-and-burn farming were no longer profitable in the beginning of the 20th century because timber was more valuable. To accommodate the loggers and the loggers’ bosses, two separate cabins were built along the Porttijoki River. These cabin no longer exist, but their remnants can be found in the terrain. The Porttijoki River was partly cleared in the beginning of the 20th century so that it could be used for log floating. For this reason, the river is not totally in its natural state. Dam structures are still standing on the shores of ponds at Kitulanlampi and downstream from Pitkä-Portti. 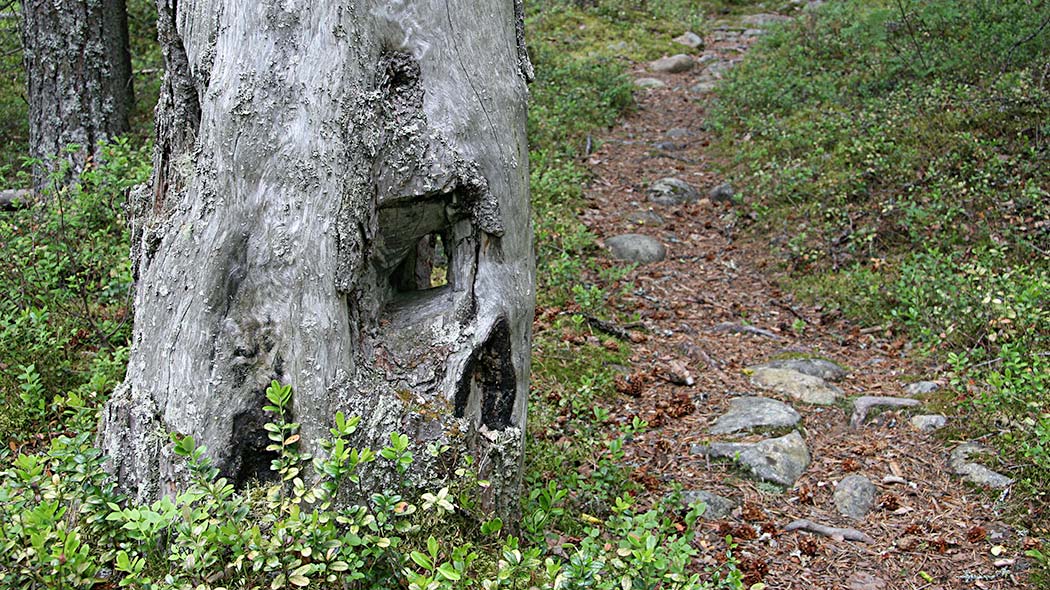 To feed their cattle, the residents of nearby houses still mowed hay from the National Parks mires in the 20th century. The hay was stacked and transported to farms when winter came. The pits left by these stacks can still be found at Mustalamminsuo Mire and Urposuonniitty Fen Meadow.

Far from any settlements, the Hiidenportti area has also offered hiding places. The remote backwoods have provided sheltered hides for example for a couple of war deserters who could not cope with the cruelties of war.

The rugged and rough region hardly attracted any permanent settlement. The first settlers arrived in Hiidenportti in the 18th century and settled on the Kovasinvaara Hill. Living in the wilderness was hard, and the turnover of settlers was high. Sources of livelihood for the inhabitants of the wilderness croft included fishing, hunting, small-scale slash-and-burn farming and tar burning. At the beginning of the 20th century the Kovasinvaara croft was extended to accommodate loggers, and there was even a kind of a shop open in the logging season.

In 1949 the owners of Kovasinvaara sold the croft to the state and the residents moved away. The buildings of the croft are no longer standing. All that remains to remind visitors of its existence are stone pillars covered by vegetation, overgrown meadows and the surrounding lush young forests on former slash-and-burn clearings. Today Kovasinvaara is a nationally significant traditional landscape site.

In the early part of the 20th century the croft was renowned for the Hiidentanssit Dance held there every July. People from all over Kainuu and North Karelia gathered there.

On the first weekend of July young people from all around Kainuu and North Karelia would gather at Kovasinvaara Hill. At that time there was a suitable break in farm work and young people had time to socialize and dance. These festivities lasted two, three days or possibly even a week, and usually involved a visit to Hiidenportti Gorge. At first visitors brought their own foods with them, but the farmer´s wife quickly realised there was money to be made by opening a café for these youngsters. People also tended to drink Moonshine (illegally manufactured spirits). Brawls did not generally occur at these festivities, but it was the meeting place for many a couples, who in future got married.

This tradition ended in 1949, when the settlers left the farm and it became state-owned. 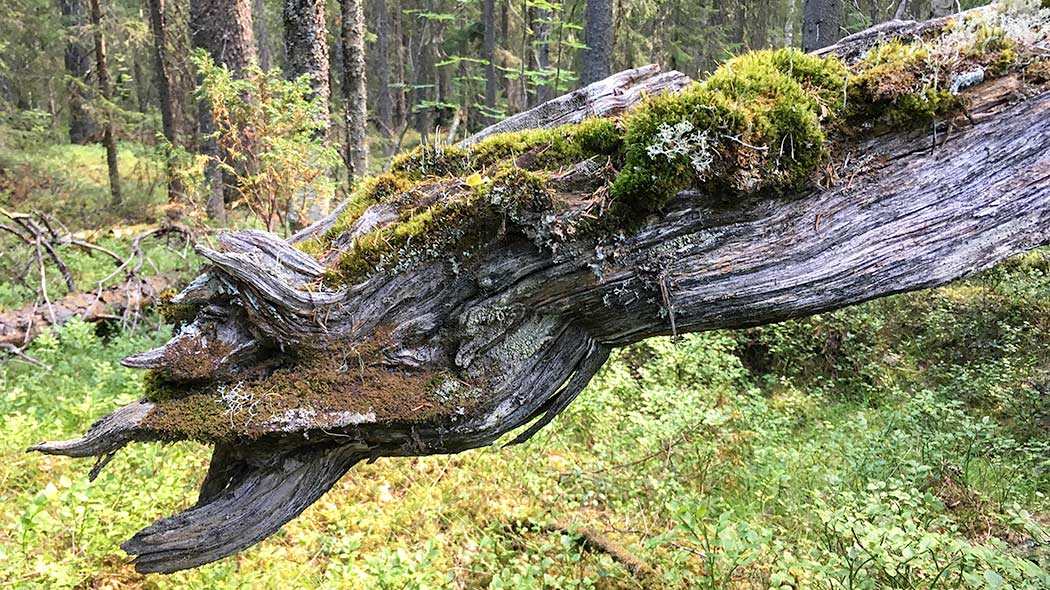