Nature of the Raseborg Castle Ruin 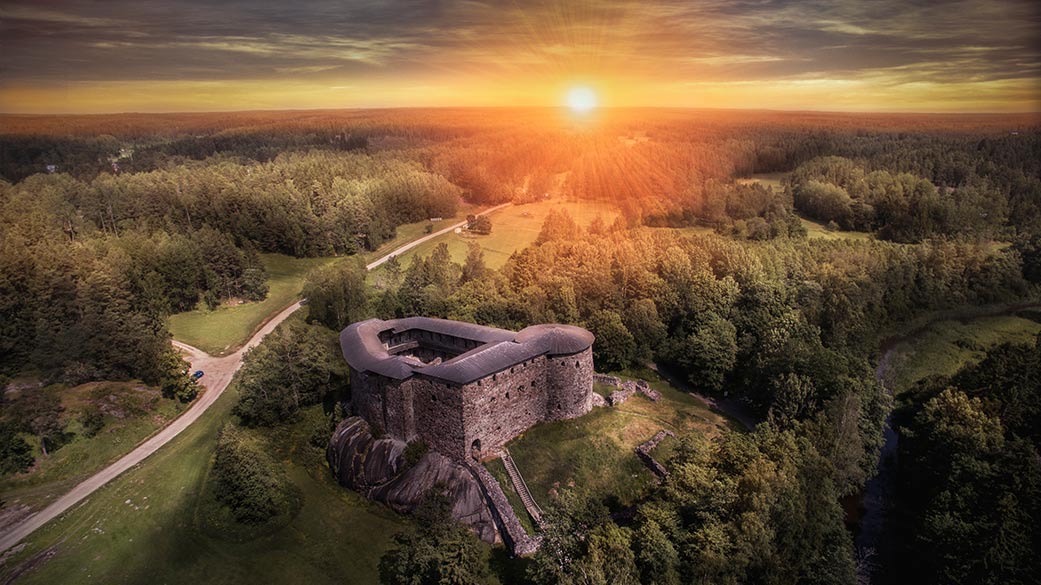 Become enchanted by the hustle and bustle of history. The extensive past of the Raseborg Castle Ruin have left traces that are still visible in the surrounding nature to this day. 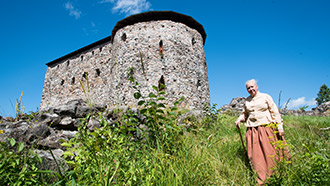 Do you recognise medieval medicinal plants in the castle grounds? Climb to the rocky meadow to admire the bloom of flowers. 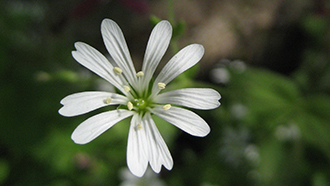 Go for a stroll in a forest with broad-leaved deciduous trees, and imagine yourself standing in the middle of a busy trading place. Only plum trees and common hops bear traces of life on the island hundreds of years ago. 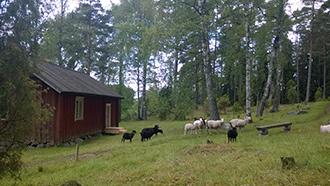 Listen to the sounds of love on Lemmenpolku Path (Path of love). As you navigate through the sheep pastures, you will get a glimpse into the soul of a crofter. 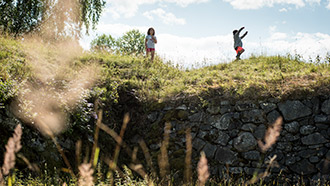 Managing a castle and nature

A castle with or without a forest? The castle ruins and their surroundings have experienced a great transformation during the renovation lasting for a hundred years. 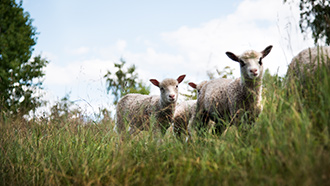 Plants in traditional landscapes are strong and tenacious, but in order to survive, they need help from the animal kingdom.

Although residents deserted the Raseborg Castle already during the Middle Ages, you can still see traces of the old settlement in the surrounding nature today. You can find various traditional biotopes near the castle, such as meadows, dry meadows and pastures where cattle used to graze for centuries.

A meadowy hill by the road leading to the castle ruins rises on the left side of the road with its great variety of species. Various rare species grow on the meadow today, such as the ribwort plantain (Plantago lanceolata) and common agrimony (Agrimonia eupatoria). The south-facing slope offers the plants fine light and temperature conditions, and the regular mowing keeps the slope open.

Meadows can also be found inside the castle walls. In addition to the meadow on the slope, the bailey courtyards have been classified as locally valuable traditional biotopes. In spring, they are covered by the bloom of charmingly yellow cowslips (Primula veris). Various medicinal and crop plants dating back to the Middle Ages can also be found inside and outside the bailey walls, such as the black mullein (Verbascum nigrum), parsnip (Pastinaca sativa), figwort (Scrophularia nodosa) and greater celandine (Chelidonium majus). 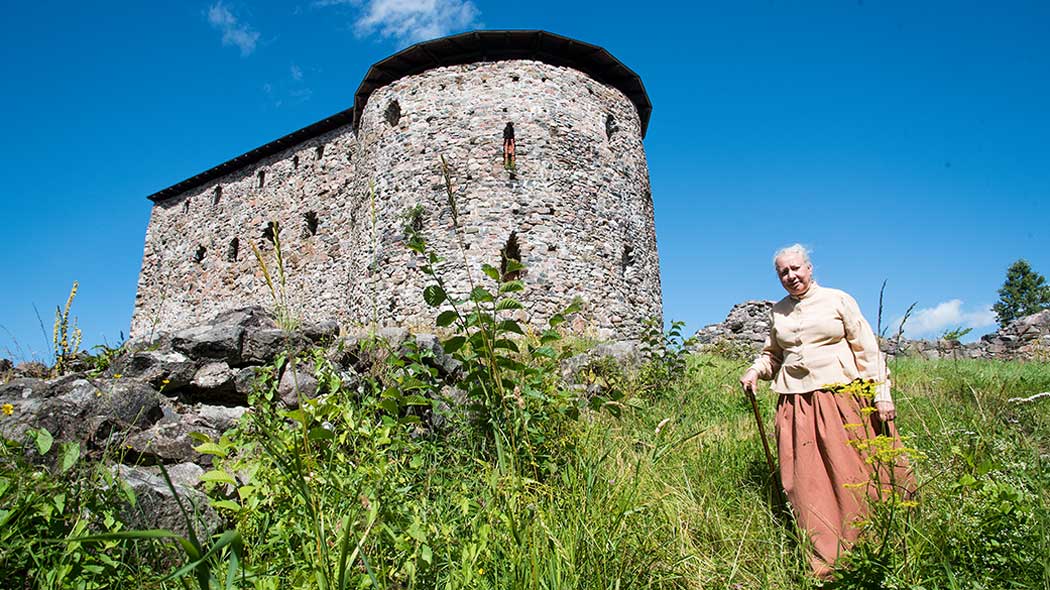 A rock meadow is hidden on the rocky hill on the northwestern side of the castle. Some of the meadow plants are low-growing, even creeping along the ground, so you have to step closer to see their flowers. The overgrown dry meadow has been only recently cleared. Despite years of overgrown vegetation, very expressive plant species can be found on the hill, such as an exceptionally abundant growth of ribwort plantain. The clearing provides the dry meadow with good conditions for making a recovery to its former glory.

A forest-clad hill called Tallisaari is located on the eastern side of Raseborg Castle Ruins. In the Middle Ages, cattle belonging to the castle was kept there. As its name indicates, Tallisaari (Stable Island) used to be an island, connected to the castle by a bridge.

The Raseborg Castle itself was also originally built on an island, as in the 14th century, the surrounding area consisted of a shallow sea bay. In its day, Tallisaari was probably much more open than today. When the castle was in use, its trees were cut down and used as firewood, and there was a lot of wear: it was a residential and trading centre populated by people and farm animals. It was also likely that most of the castle’s crops and gardens were located in the Tallisaari area. 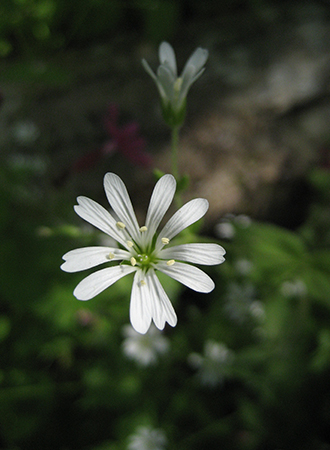 Nowadays, Tallisaari is strongly wooded, and its trees are approximately one hundred years old. However, the human touch is still strongly visible among the vegetation, and you can find many interesting cultivated plants in the forest. Relics of previous cultivation include common hops climbing along the trees, and plum trees and currants (Ribes) growing here and there. Broad-leaved deciduous trees such as the wych elm or Scots elm (Ulmus glabra) and different types of ash (Fraxinus excelsior) are probably relics of previously cultivated trees.

When the castle was renovated, a large quantity of brick and mortar rubble was piled in the Tallisaari area, which is still visible in the terrain. However, the vegetation has had plenty of time to recover after the renovation. In recent years, natural plants have taken over in Tallisaari, and today, vegetation in the area has a particularly herb-rich character. Hedge woundwort (Stachys sylvatica), red campion (Silene dioica) and wood stitchwort (Stellaria nemorum) can be found growing on the forest floor. In spring, an abundance of cowslips (Primula veris) blooms on the southern slopes of Tallisaari and the bailey. The shrub layer consists of plants such as guelder rose (Viburnum opulus), mountain current (Ribes alpinum) and honeysuckle (Lonicera xylosteum), and the most common trees are aspen (Populus tremula) and maple (Acer platanoides).

Approximately 0.5 km in length, Lemmenpolku Path is a natural path following the old roadbed and leading from the Raseborg Castle Ruins to the village church of Snappertuna. The path runs through a grazed pasture, and provides an impressive glimpse into the heritage landscape surrounding the castle.

Lemmenpolku Path was formed in the 1960s when local biology teacher Einar Öhman, who was interested in history and built cultural environment, wanted to create a direct path to the castle ruins from the visitors’ lodge established in the village. He started calling the path Lemmenpolku, as in spring time, you can hear the mating calls of love-sick birds filling the air along the path.

The path runs through an area called Galbacken or Teilimäki. Teili refers to a pole where a person sentenced to death through breaking wheel execution was tied. Based on the name and historical data, it is regarded as a fact that ancient hanging gallows were located on the hill, but their exact location is not known. Starting from the castle, the path first passes a summer theatre and a neighbouring rock meadow, arriving at an old croft. Meadow species grow in abundance in the croft’s surroundings, such as the peach-leaved bellflower (Campanula persicifolia), pyramidal bugle (Ajuga pyramidalis), brown knapweed (Centaurea jacea) and perforate St John's-wort (Hypericum perforatum), and the increasingly less common grasses, such as matgrass (Nardus stricta), spiked sedge (Carex spicata) and heath grass (Danthonia decumbens). The route continues zigzagging through a sheep pasture. On the eastern side of the path, there is an ungrazed heath forest and the western side consists of forest pastures. In summer evenings, the intoxicating smell of lesser butterfly-orchids (Platanthera bifolia) fills the air. 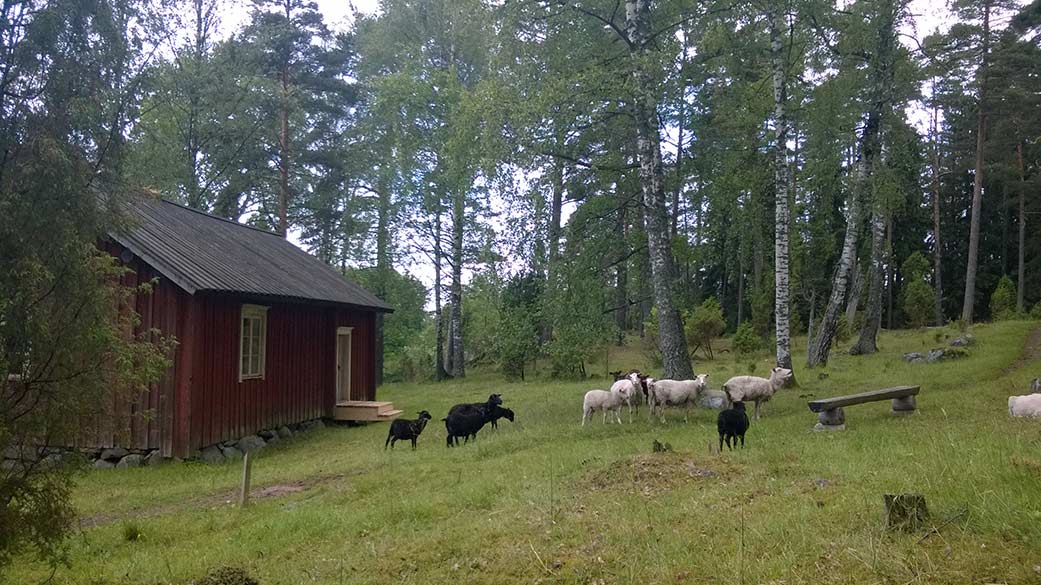 From the bridge across the stream, you can take a look at the birch paddock spreading along the shore. Its traditional name in Swedish, “skogsbryn”, means “edge forest”. A strip of forest used to frame the croft yard and the nearby pastures, and protect them from strong winds. The forest was grazed occasionally, but in terms of its vegetation, it continued to resemble a forest rather than a meadow, and the residents used to collect fire wood, berries and mushrooms there. The strips of forest framing the pastures are diverse and rich environments in terms of their species. Among other species, great numbers of various insects thrive in their sheltered environment, luring bats to the area, as well as deer (Capreolinae) and the European hare (Lepus europaeus).

Managing a castle and nature: from overgrown land into a gorgeous heritage landscape

The heritage landscapes have been formed as a result of traditional agriculture. Various species of plants, mushrooms and animals thrive in them, and the area’s diversity cannot be maintained without regular care. At the end of 19th century, when renovation work started on the Raseborg Castle Ruins, the area was badly overgrown and, a high forest grew even inside the castle walls. 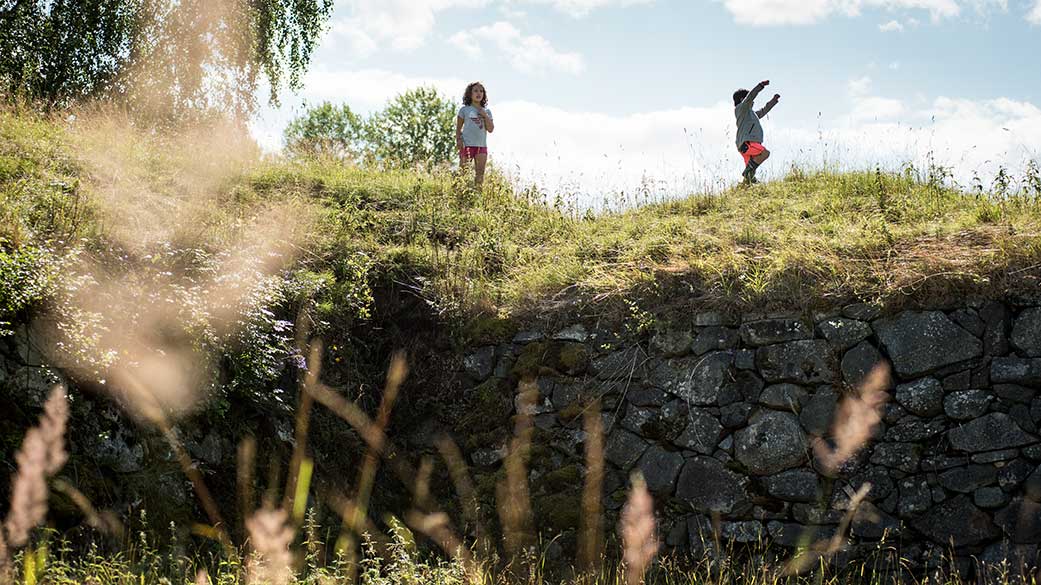 Landscaping was part of the castle renovation from the very beginning, but the original plan was to develop the castle surroundings into a park-like environment. In the 1970s, however, a large quantity of brick and mortar rubble from the construction site was piled in the Tallisaari area, which used to function as the castle courtyard.

No later than in the 1990s, people came to realise that the unmanaged old pastures and meadows with diverse species were losing their nature values, and thereafter, they have been maintained systematically and regularly. Lemmenpolku Path, established in the 1960s and leading from the castle to Snappertuna village, was reopened as a nature trail in 1997.

The first management plan for the heritage landscape in the area was drafted by Raaseporin Luonto ja Ympäristö ry (Raseborg Nature and Environment Association). Thereafter, the Finnish Heritage Agency was in charge of its care and monitoring until 2014, when the responsibility was transferred to Metsähallitus. At this point, overgrowth had started again because of the scarcity of resources, and in recent years, clearing work has been done in the area to reopen the landscape. The future plan is to stabilise the amount of maintenance to a sufficient level, as diverse traditional biotypes such as Raseborg are becoming increasingly rare in our country, and it is more important than ever to protect them through correct care.

Heritage landscapes surrounding the Raseborg Castle Ruins, that is, meadows, pastures and forest pastures, are maintained regularly by sheep. Sustaining the diversity of these meadows and pastures requires the removal of some plant biomass from the nutrient cycle on a yearly basis. Otherwise the area will slowly become eutrophic, and large plants benefiting from the nutrients will take over from the majority of other species.

One way to remove excess biomass is to mow the area towards the end of summer by cutting down the grass and herbaceous plants, and raking and collecting the hay for later use. In earlier times, hay was stored and it was valuable as winter fodder, but nowadays hay collected during the maintenance of heritage landscapes is usually burned. 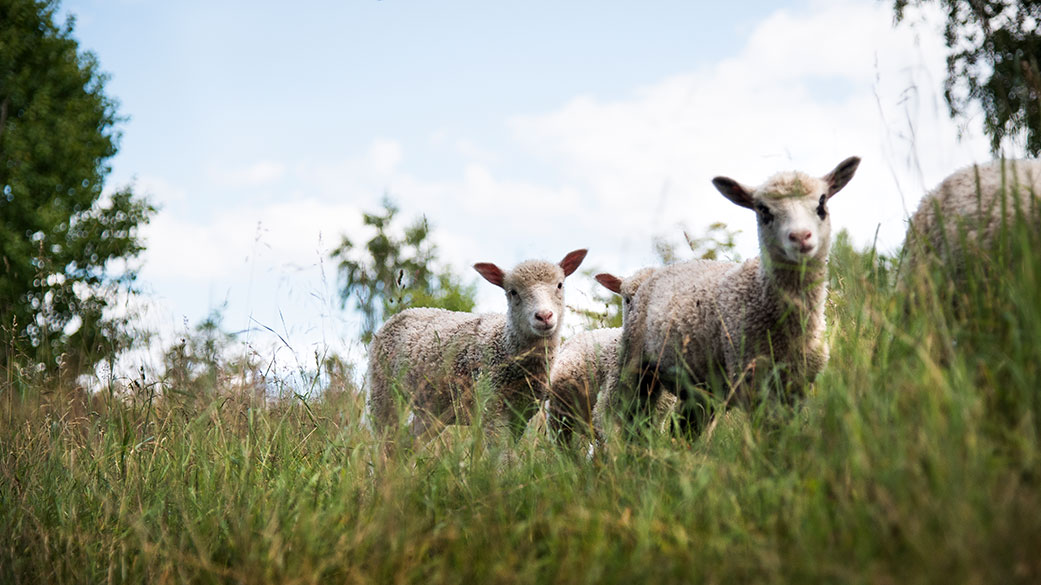 While the process of mowing and haymaking is tough physical labour requiring the input of a number of people, sheep can do the same work by using their teeth. This is why sheep and other grazing animals are a preferred form of nature conservation whenever it is possible to organise grazing. Since the 1990s, the pastures of Raseborg Castle Ruins have been maintained with the help of sheep, and in late summer, the fields on the eastern side of Tallisaari are grazed by Eastern Finncattle cows. Sheep prefer low-growing grass, and so they are best suited for grazing dryish meadows and heritage biotypes that have been maintained for a long period of time. Cattle and horses are better suited for lusher areas, such as coastal meadows.