According to the current view, Kauhajoki and Karvia were permanently settled rather late, in the 16th and 17th centuries, but people used to go hunting in the Kauhaneva-Pohjankangas pine heaths and open treeless mires back in the Stone Age. The hunting bases in the area have served as the starting places for hunting, fishing, slashing and burning, and tar burning for centuries. At Pohjankangas, which belongs to the Suomenselkä watershed region, you can still find trapping pits that may have been used as early as the Stone Age; they are a sign that wild forest reindeer lived and were hunted in the area.

The Pohjankangas pine forests provided suitable material for tar burning and charcoal production. Together with farming and cattle raising, tar burning was a significant source of livelihood from the 17th to the 19th centuries. The heyday of tar burning was in the 18th century, when shipbuilding was booming due to the various wars around the world.

Almost every farm burned tar. Trees from the common forests, often located near the ancient hunting bases, were first notched so that resin began to exude. A medium-sized tar-burning pit produced 10–30 barrels of tar, and it took a week to burn it. The tar-burning technique was developed over the centuries.

The Kyrönkankaantie road that runs through Kauhaneva-Pohjankangas was mentioned in the oldest Finnish road network survey from the 16th century. The road was a just a path at the time, but later it became a summertime horse route, then an important postal road, and finally a busy travel route from Ostrobothnia to Southern Finland in the 18th century. Its importance later diminished, but even at the time of the Russo-Swedish War of 1808–1809 the troops marched to battle along it. 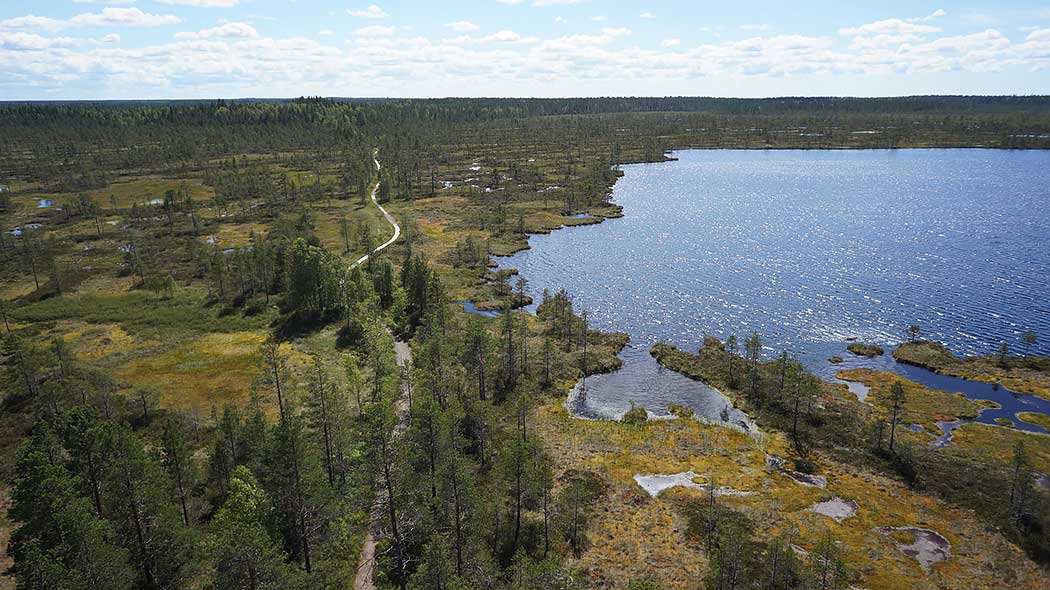 The Kyrönkankaantie road is still a hiking and cycling route and an official museum road of the Finnish Transport Infrastructure Agency. The original scenery and atmosphere of this traditional route has been preserved in a unique way within the national park.

Metsähallitus has been exploring the cultural history and past of the Kauhaneva-Pohjankangas National Park to ensure the marks of the past will be protected. The survey has also brought new information to be shared with the visitors to the park.

Archaeologists have found many different signs of the long history of living and hunting in the national park area. These traces of the past can be observed by all who hike in the park. You should try the Kyrönkankaantie road, for example, which has been used since the Middle Ages.

The Heaps, Pits and Memorials at Lapinkaivo

When following the route of hunters, cavalrymen and postmen along the Kyrönkankaantie road, it is easy to spot signs of the travellers of the past in the terrain. Near the Lapinkaivo pond, for example, you can find several relics of various types and ages. Lapinkaivo was already marked on the early road maps, and the stories related to it have been written down since the end of the 17th century. In those stories, it is sometimes a Lapp, sometimes the golden carriage of a Russian warlord that gets drowned in the pond.

At the southern end of the pond, on a gentle slope, you will see a round, 15-metre-diameter tar-burning pit. Today, the tar-burning pit is a hole surrounded by earth banks with pines growing over it. On the terrace-like heath at Lapinkaivo and Lapinharju you can also find a chain of 21 trapping pits, which appear as bowl-like, moss-covered holes in the ground.

A memorial to the hunger years by the road north of Lapinkaivo will give you a glimpse of the harsher side of the history. The text on the memorial (when translated into English) reads: "Juurakko Gustaf, b. 18.5.1808, d. 11.4.1868, starved to death on this spot". There are traces of an older, decomposed wooden memorial cross at the site. The sad destiny of Gustaf Juurakko is also told in a memorial tree, with the dates carved on the year of his death.

The sites in the Lapinkaivo area are a good example of the importance of the hunting culture for earlier generations, the way the wilderness both gave and took. They are also good places to stop and think about the marks the previous generations have left in the natural environment, and what kind of marks will be left by the people of today.