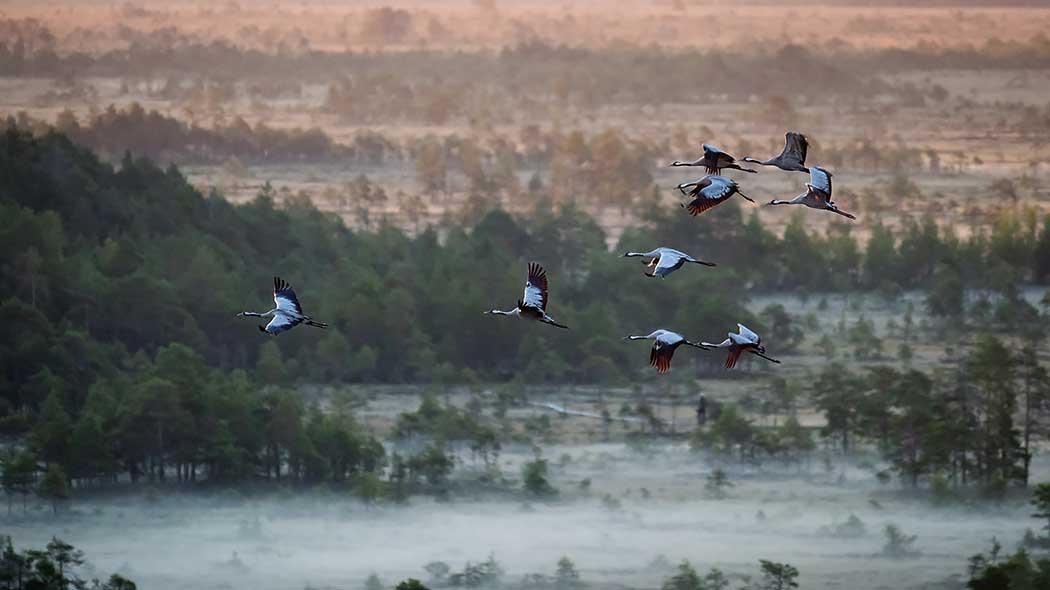 The deepest mire in Finland is under your feet at the Torronsuo National Park. Cranes, peat mosses and cranberries love the barren and natural areas of the raised bog. The scent of the marsh Labrador tea charms visitors. 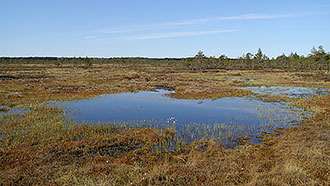 The history of the mire is preserved in peat. A ten-meter-thick layer of turf hides in its depths thousands of years of plant growth and mire history.
Read more > 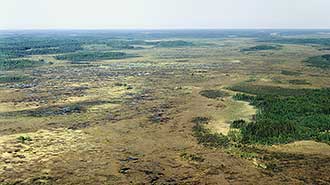 The hummocks and gullies of a raised bog

Torronsuo is the largest raised bog in Southern Finland and is marked by hummocks, moist hollows, and puddles.
Read more > 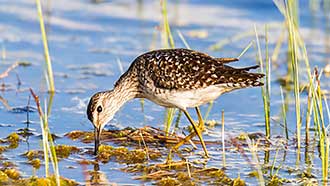 A safe haven for birds and insects

Butterflies flutter and birds nest and rest in the tranquil of Torrosuo mire: for example the wood sandpiper (Tringa glareolaand) and the frigga fritillary (Boloria frigga) butterfly.
Read more > 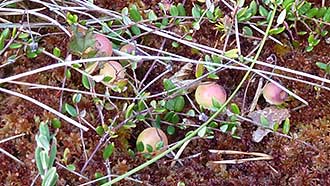 The regional emblem of the Torronsuo National Park is the cranberry (Vaccinium). Together with marsh Labrador tea, calluna and crowberry, cranberry is a common plant in raised bogs.
Read more > 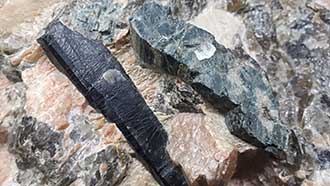 Gemstone-rich minerals and extensive quartz deposits have made the Torronsuo geology famous since as early as the 18th century.
Read more > 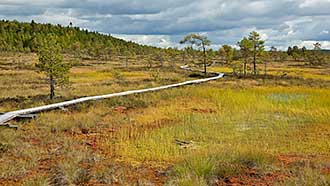 Please stay on the board-walks, especially between 1 April and 15 July. During these times there are restrictions on movement in some areas. (julkaisut.metsa.fi) Read more > 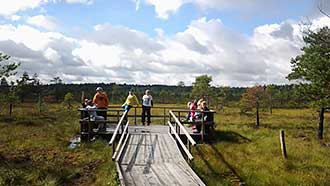 Responsible visitors take care of the communal areas in the National Park and do not leave traces in nature. Please note that there are no rubbish bins at Torronsuo.
Read more > 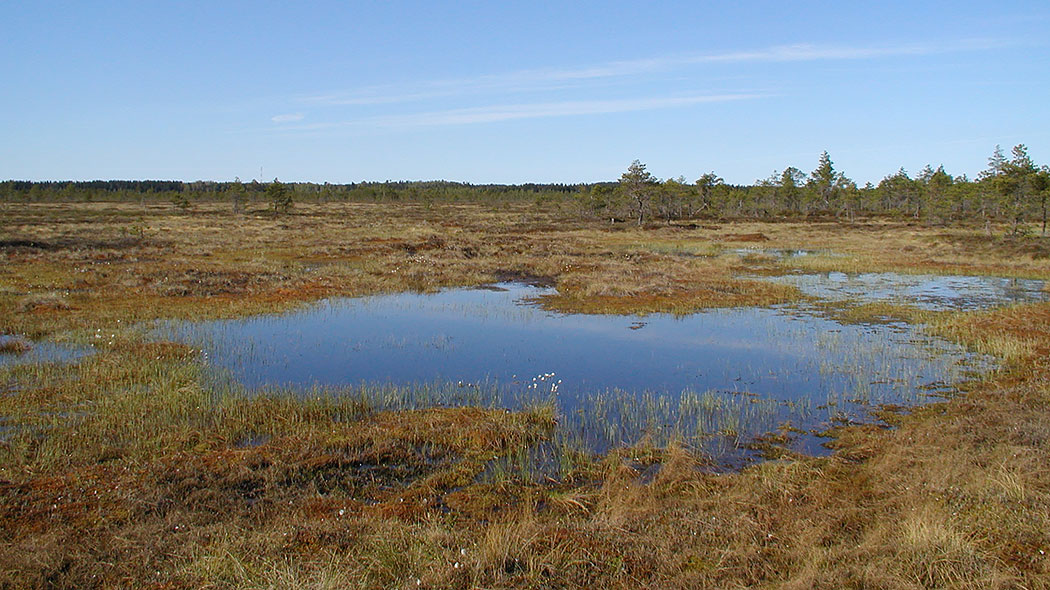 Torronsuo Mire was formed in the southwest part of the Tammela Upland, in a long, clay-bottomed bay in the Yoldia Sea. The sea in this area retreated because of fast land uplift, a phenomenon caused by the melting of the ice sheet that had put pressure on Earth’s crust during the latest ice age. As a result, a vast lake formed about 8,500 years ago. The shallowest parts, such as Torronsuo, gradually became overgrown. The remnants of dead plants built up on the moist anaerobic base and then decayed to form peat and layers of turf over the years.

During the first 4,500 years, silt and sedges thickened the peat layer by more than one metre. The transformation to marshland accelerated after sphagnum mosses began to thrive. Several metres of sphagnum peat developed over the next 4,000 years. The layer of peat that has accumulated and grown over thousands of years contains a record of past eras in its horizontal layers. There have been some dry periods and some cold ones over the years. A large forest fire that occurred in the mire is visible as a charred black line in the peat. Pollen from mire plants, entire root systems, objects buried in the mire and plant waste are all layered on top of each other in this deep mire.

Today, the average peat depth in Torronsuo is 5.8 metres. The thickest peat layers are more than 12 metres, making them the deepest in Finland. Sphagnum moss grows 1–2 cm per year, and the peat level in the mire is rising by an average of 1.1 mm per year in the longer term.

Torronsuo National Park mostly consists of mire. There are many small pine forest islands in the middle of the mire. Torronsuo Mire is surrounded by forests, eskers, rocks and cliffs that provide a great view over the different parts of the mire.

The Hummocks and Gullies of a Raised Bog 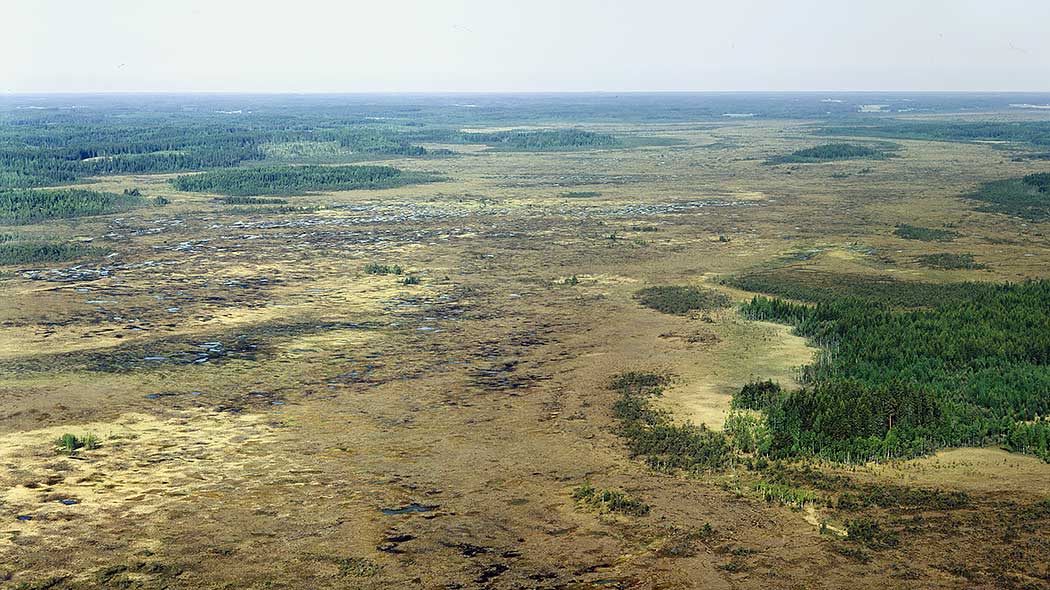 Torronsuo is the largest raised bog in Southern Finland, and it remains in a nearly natural state. Several elevated sphagnum centres can be observed in the mire area, which is more than 10 kilometres long. They are surrounded by a labyrinth of hummocks, moist hollows and puddles with open water where dry shrubs and trees grow. Hummocks, hollows and puddles are different structures of a raised bog that determine, for example, the amount of water.

The centre parts of the bog were the first to develop and are several metres higher than the edges, where the turf layer is not as deep. The edges are more lush, and wetter than the centre. The raised structure of the centres means that discharge water containing nutrients from the environment does not reach them, and even plants with the longest roots are no longer connected to the mineral soil. The vegetation receives all its nutrients from rainwater, and only species that are adapted to barren conditions can survive here.

Like most other raised bogs, Torronsuo has several different mire types, in other words, different mire plant habitats. The most prominent are the spruce- and birch-covered mires around the edges of the area, the pine slough, and the wet, open bog in the centre that is nutrient-poor and dominated by sphagnum moss. Each mire type is characterised by certain plant and animal species.

A Safe Haven for Birds and Insects 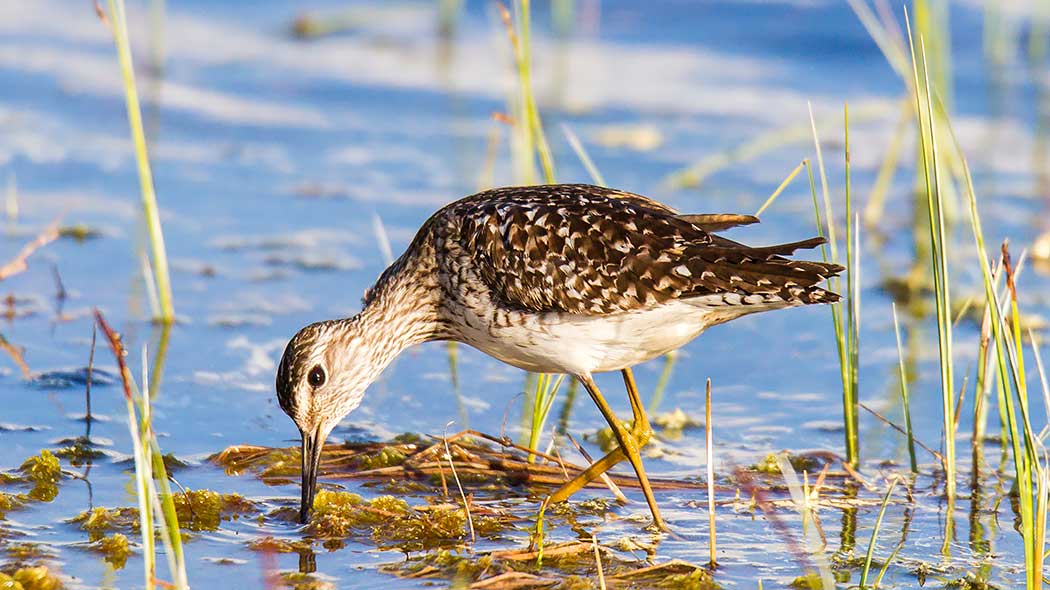 Torronsuo Mire with its surrounding forests is, for many birds, an important nesting area and stopping place during the migration. During the spring and autumn, large flocks of migrating Cranes (Grus grus) can be seen on the mire while moulting cranes are common in the summer.  The puddles are popular with water birds and waders.

The set of bird and insect species on the large mire area also includes northern species. The Northern Grizzled Skipper (Pyrgus centaureae), the Freija´s Fritillary (Boloria freija) and the Frigga's Fritillary (Clossiana frigga) are beautiful butterflies flying on the raised bog. In other part of Finland they have disappeared or become rare, because mires there have been drained, but on Torronsuo they have found a haven. Sometimes even the Northern Pintail (Anas acuta), the Great Grey Shrike (Lanius excubitor) and the Ruff (Philomachus pugnax), all of which are northern birds, nest in the area. The Eurasian Golden Plover (Pluvialis apricaria), most of which live in the north, is quite abundant on Torronsuo Mire.

The Taipaljärvi bird haven is well-known for its large Spotted Crake (Porzana porzana) population. This flood-meadow was created by draining a lake and is now part of the National Park. 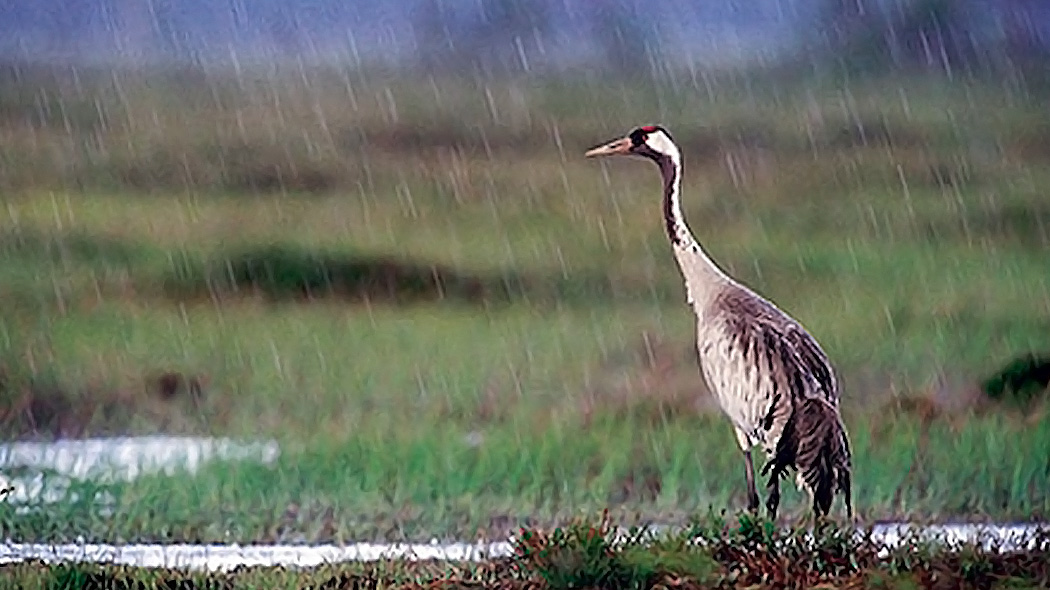 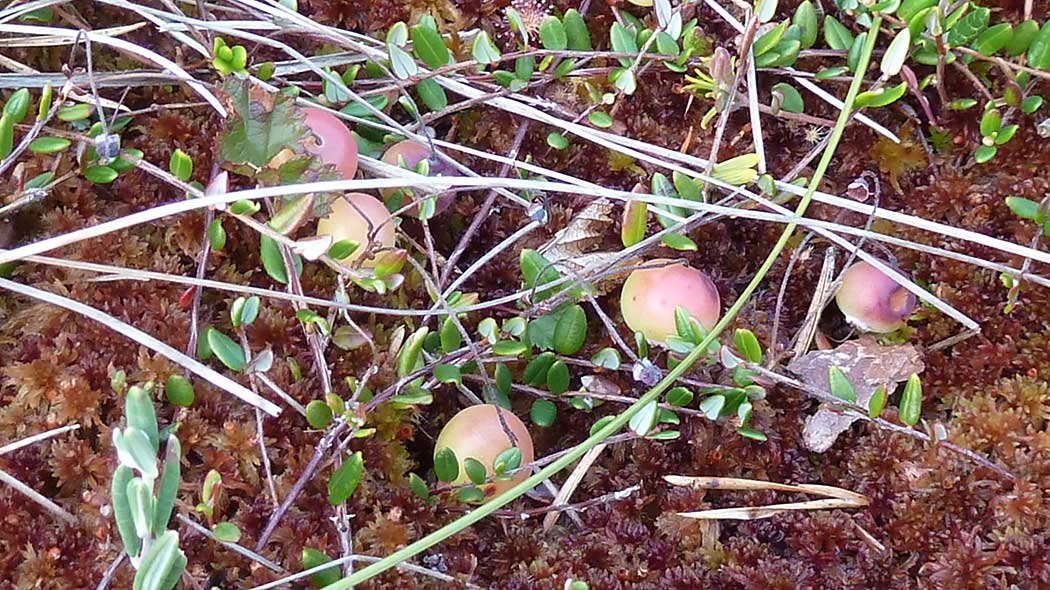 The set of mire plant species on Torronsuo is quite diverse. In addition to many species of sphagnum moss, Torronsuo Mire is home to many typical raised bog species, such as Heather (Calluna vulgaris), Marsh Tea (Ledum palustre), Bog Bilberry (Vaccinium uliginosum), Crowberry (Empetrum nigrum), Bog Sedge (Carex limosa) and Rannoch-rush (Scheuchzeria palustris). At some places the vegetation of the islands on the mire resembles herb-rich forest, quite opposite to the barren raised bog. For example on Kiljamo island, the Hepatica (Hepatica nobilis) and the Spring Sweetpea (Lathyrus vernus) flower in the spring. The woody plants of the islands which are typical for herb-rich forests include the Littleleaf Linden (Tilia cordata) and the Fly Honeysuckle (Lonicera xylosteum).

The emblem plant of the National Park is the Cranberry (Oxycoccus quadripetalus). Dwarf birch, cloudberry hummocks and cranberries that are very plentiful in some spots bring a northern feel to the mire.

Torronsuo area has been well-known for its quartz deposit since the 1700s, and for its rare minerals, such as pegmatite, since the beginning of the 1800s. A total of 15 of the 60 pegmatite minerals in the area were found here for the first time in Finland. Sukulatite, named after the village of Sukula, was found in the area for the first time in the world. In 1862, the famous arctic explorer A. E. Nordenskiöld made an expedition to Torronsuo area to study its tantalum mineral deposits. Almost all of the first tantalum mineral samples in the European museums originate from this expedition. 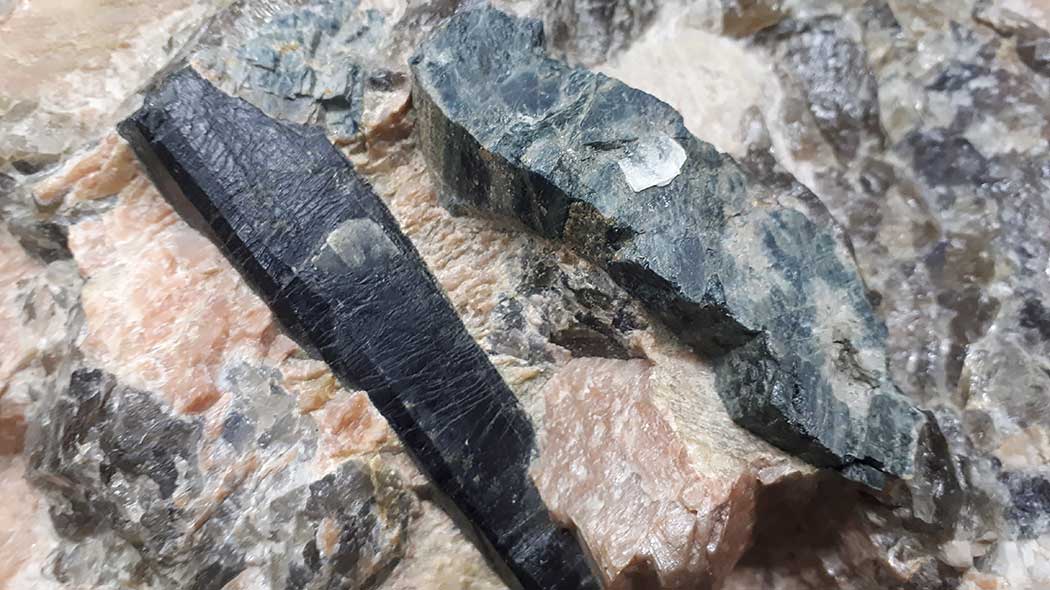