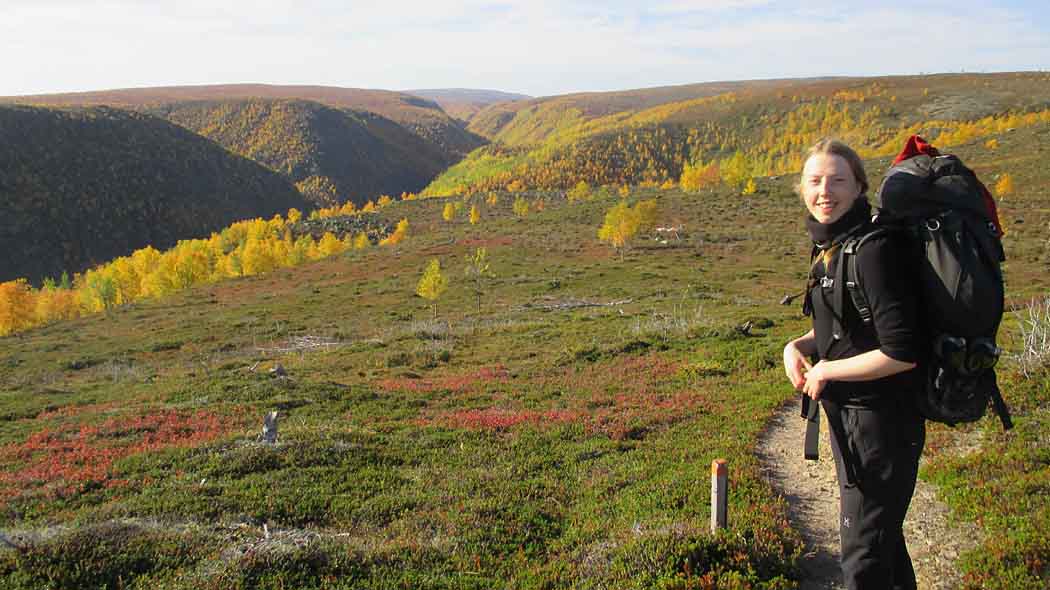 This extremely demanding trail traverses the large strict nature reserve across varying terrain. Kevo Strict Nature Reserve is one of Northern Finland's largest protected areas. In summertime hiking in the area is strictly restricted to marked trails. During winter skiing is allowed in the nature reserve, but there are no maintained ski trails. Locals who practice reindeer husbandry and other natural livelihoods have far broader rights and privileges within Kevo Strict Nature Reserve than hikers do.

Suttesája or Sulaoja is the trail's southern starting point. When setting off the trail first leads through fell birch forest over hilly terrain and then descends to the camping site by the River Luopmošjohka. On this section of the trail the ground is easy to walk.

When continuing on from the River Luopmošjohka the trail follows a ridge, which runs between the Luomusjärvi Lakes, to Ruktajärvi open wilderness hut. While leading along the ridge the terrain of the trail is hilly so there are small ascents and descents along the entire way. Before reaching Ruktajärvi open wilderness hut the trail descends to a narrow, flat isthmus which separates two lakes. There are rocks at some parts of the trail, but this section is still relatively easy to travel. Close to the wilderness hut there is a lean-to shelter for day-trip use.

After Ruktajärvi open wilderness hut the trail continues on through fell birch forest all the way to the next camping site. This section of the trail is easy to travel. The terrain is slightly hilly.

After passing Geavvogeašláttu camping site hikers come across the first of many climbs, as the trail leads onto the fell tops. The climb is at first steep, but eases to a gentle slope soon after. The trail leads across the fells for several kilometres and then descends to the next camping site. This section of the trail is very rocky, which makes it difficult to hike. In the open fells there is a large boulder by the trail. The descent from the fells is 2 km long. At first the trail slopes downward gently, but at the end of the descent it gets steeper. At the camping site there is a wooden campfire shelter for day-trip use.

The trail starts a steep climb into fell birch forest right after the campfire site. The climb is short, but very steep. About a kilometre from the campfire site the canyon appears abruptly in front of you, like a brand new tear in the rock bed. This is without a doubt the most beautiful sight along the trail. From there the trail continues along the edge of the canyon and then moves a bit away from it into the fell birches and descends to the next campfire site, situated by a stream. This descent is very steep before reaching the stream has steps.

After the stream there is again a steep climb -this time along steps. After the ascent the trail leads alternately across open fells and through fell birch forests. Along this portion of the trail there are a few steep descents down sets of steps to stream banks which are followed by climbs up the opposite slope. At the end of this section the trail descends into Kevo Canyon coming to Fiellu Waterfall. This descent is long; it starts out as a gentle downward slope, but is extremely steep at the end. There are steps for the final part of the descent. After the steps hikers cross the River Fiellogeahjohka at a wading point which has a wire to hold on to. This section of the trail is at points rocky and there are points with loose rubble and earth. This makes the section difficult to travel. At the camping site there is a turf hut for day-trip use.

After passing Fiellu Waterfall there is again a steep climb out of the canyon along a set of steps. At the start the ascent is steep, but the trail quickly reaches the open fells where the slope becomes gentler. Altogether the climb is about 3 km long. After the ascent the trail leads along the open fells at times through fell mires. In the open fells the trail is rocky but level. The fell mires are less rocky and therefore easier to travel across. At the end of this section the trail yet again descends through pine forest into the canyon. The descent is at first a gentle slope, but soon becomes steeper. The lowest section of the descent is again the steepest and has steps to assist hikers.

After passing the wading point the trail follows the river for a while before climbing into the open fells. This time there are no steps so the climb is along a very steep and rocky cliff-side. The slope soon becomes a gentler fell side, though the climb does continue for another kilometre to the next camping site. There is a campfire shelter at the camping site so that campers stay dry and warm in the event of poor weather.

From this camping site the trail continues on across the open fells sloping up and down at times when going over fell peaks. At the halfway point of this section the trail descends steeply to the bank of a fell stream and then immediately climbs to the fell tops again. There are steps at the bottom part of the descent and ascent. This section of the trail ends at Gaskkamuš Njaggaljávri camping site, but before reaching it hikers must descent down the trail´s steepest slope. This descent starts as a gentle slope, but soon becomes steeper. The descent is at times extremely rocky as well as steep. This section of the trail ends with a steep set of stairs with several hundred steps.

The trail continues with a short set of steep steps and moves away from the river bank. For the next kilometre the trail follows very rocky terrain which slopes up and down and then leading to the camping site on the shore of River Kevojoki. There was a turf hut, and there is still a fireplace (hut burned 27th of july 2015) for day-trip use on the site.

From the camping site the trail follows the bank of the River Kevojoki downstream. At the start of this section hikers must climb one of the trail's most difficult ascents. The trail climbs up a nearly vertical wall. There are several steps built into the wall and a rope handrail to aid in the climb. Before reaching the wading point the trail levels out and for the rest of the section it leads across gently sloping terrain through riverside birch forest. Hikers will cross the River Kevojoki at a wading point equipped with a hand wire. The camping site is right on the other side of the river.

The trail follows the canyon floor through pine forest. The climb out of the canyon is first along steps and then along sloping rocky terrain all the way to the next camping site.

After this camping site the trail climbs once more, but not as steeply as earlier. After the ascent the trail is level and easy to travel. Hiking across the isthmus between Lakes Geamus Balddotjávri and Stuorra Balddotjávri and through the mire area is not demanding anymore as there are duckboards to aid hikers to the next camping site.

For the last few kilometres before the trail's end point at Ganešjávri it winds downhill across somewhat rocky forest land. The trail ends with a set of steps and a steep descent to Lake Ganešjávri. 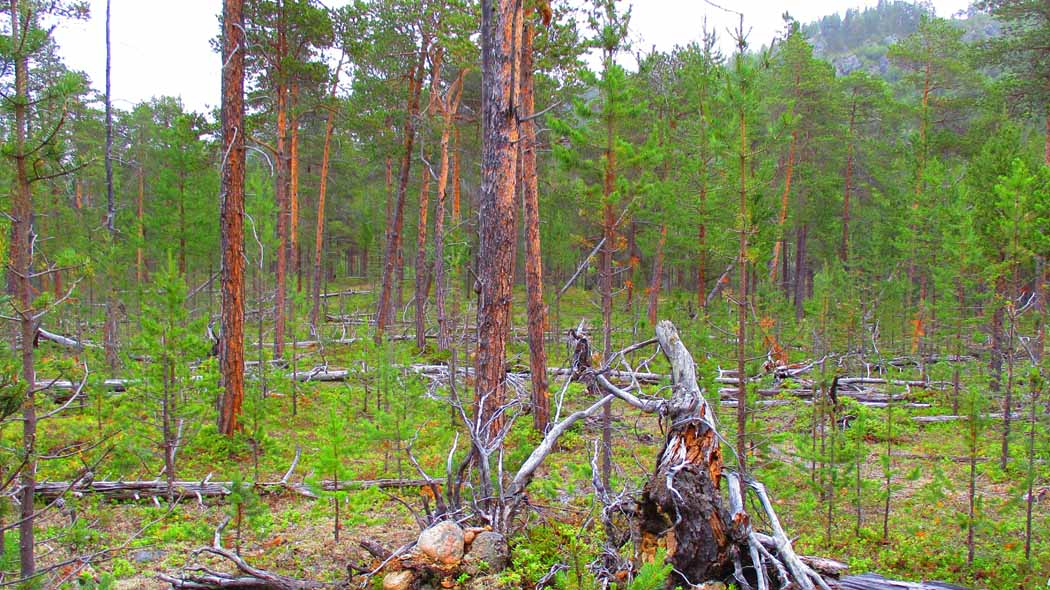 From North to South:
(overnight stays)