The forest in Langinkoski Nature Reserve is quite diverse. There are impressive pine forests on the rocky hills, and lush spruce forests on the lower slopes. There are also light mixed-wood forests and multilayer deciduous forests. The aim is to conserve specimens of areas which are as close to their natural state as possible. There are also shore cliffs, herb-rich forests, wetlands, and flood meadows and coastal meadows dominated by the Black Alder (Alnus glutinosa).

The arboretum is located on the southern side of the nature reserve, which is the most luxuriant part of the area. There are 21 species of trees which have been planted to grow as a small forest. Eight of the tree species are native. The arboretum was established in 1959, so the trees are large now. Of some species, only a few individuals survive, but other species, such as the Siberian Larch (Larix sibirica), the Balsam Fir (Abies balsamea) and the Yeddo Spruce (Picea jezoensis), grow well in the area. 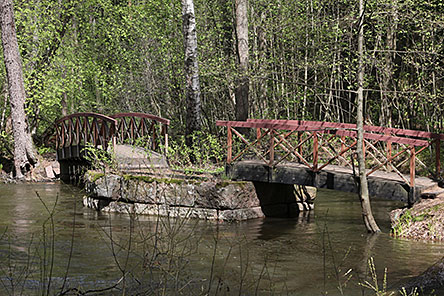