The coast and the archipelago in Southwest Finland have been populated since late Stone Age (about 2000-1300 BC). After the Ice Age the warming climate and the abundance of natural resources around the shores attracted the Stone Age and Bronze Age men to settle down by the sea. In the Baltic Sea, where the salinity was higher than nowadays, lived atlantic cod (Gadus morhua ) and plenty of other sea fish. Hundreds of thousands seals lived on the islets and protruding rocks. The abundance of birds provided a source of meat, eggs and down. Because of the warmer climate, the conditions for small-scale agriculture and cattle herding were even better than nowadays. 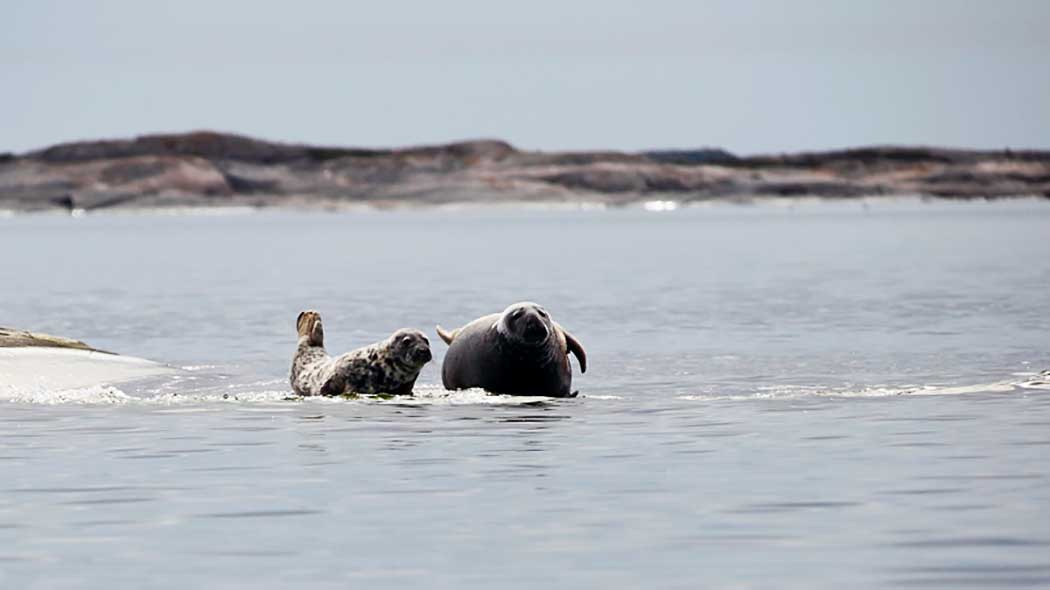 Trade, handcraft and navigation were practiced already in the early times in addition to the basic sources of livelihood. Sailing began in the whole of the Baltic Sea region latest in the Bronze Age. The sea connected people. The southwestern archipelago became a part of the northern Baltic Sea region cultures, which had common means of livelihood, use of metals, and burial customs.

The present National Park area became inhabited in the Iron Age (500-1150 BC). Many ancient remains of the Iron Age settlements have been found in the National Parks co-operation area. Pollen analysis has shown that the agriculture in the coast has been continuous since the Iron Age until these days.

The Swedish settlement moved to the area in the late 1200s, and therefore the population increased remarkably. About half of the villages in the current National Park co-operation area were inhabited already in the Middle Age.

Development in the means of livelihood affects the population

The population in the archipelago increased until the mid 1500s, after which it started to decline fast. The natural resources could not support more people with the old techniques. The decline was caused not only by the decrease in available natural resources but also by wars and diseases. In the beginning of 1700s the Great Northern War and the Black Death made the life more difficult in the archipelago.

In the mid 1800s the life in the outer archipelago changed because the technical development made it easier to earn living. New fishing methods, such as hook and drift nets, no longer required joint effort of the whole village. Their deployment made it possible for people to live outside the villages. The new settlements led to fast population growth. 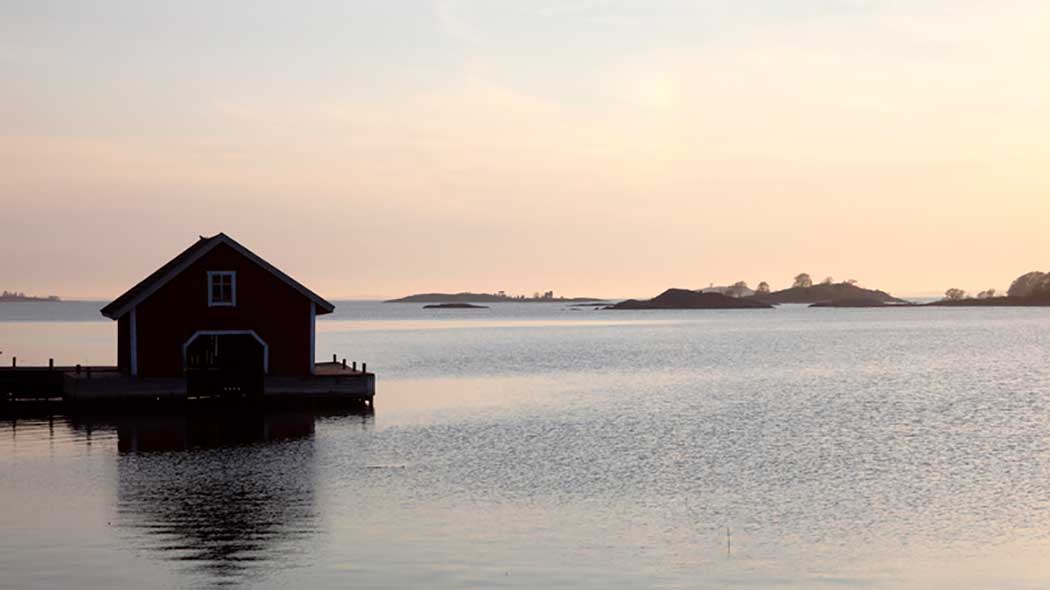 In the beginning of 1900s, the work opportunities in mainland and towns began to attract the people of the archipelago. The poorest crofter's cottages were deserted first. However, the outer archipelago was still inhabited until the 1950s, and around 1970s the population started to grow again as the town people found the "summer paradise".

In the traditional self-sufficient way of life the islands were used as grazing ground for cattle. The combination of grazing, and clearing and burning over woodland created and kept the meadows open. Many birds, plants, mushrooms, butterflies and beetles unknown in the mainland could be found on the pasture and leaf fodder meadows. After the decline in permanent settlements, agriculture and keeping of cattle, the traditional pasture and meadows began to disappear.

The land rose from the sea

The prehistory of the archipelago is, at the same time, history of the land uplift. When new islands rose from the sea, prehistoric settlements were set up there. During the Stone Age and the Bronze Age, the conditions in the archipelago were quite favourable for the inhabitants. The warm period after the Ice Age made the climate warmer than it is nowadays, and there were abundance of fish and game. 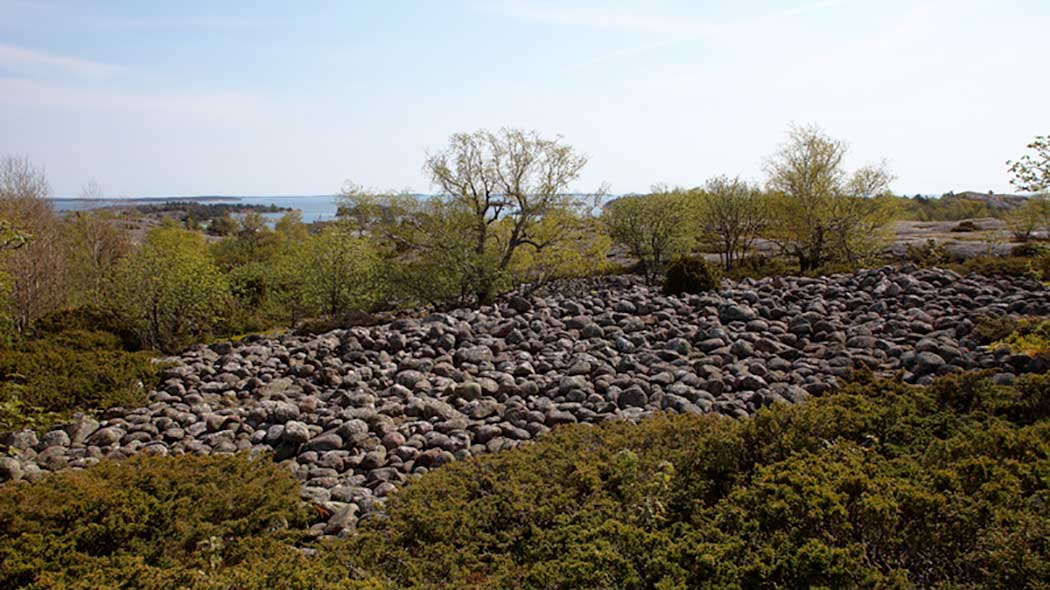 During the Stone Age and the Bronze Age, the islets of the present-day outer archipelago were 20 - 25 metres below the sea level. Then outer archipelago was located around the present main islands of the municipalities of Nagu, Korpo and Houtskär. Nowadays, the Stone Age settlement of Bötesberget in the municipality of Dragsfjärd, from 6000 BC, is located 55 metres above the sea level, on forested upland. In the old days, the landscape surrounding its inhabitants was quite different from today: the settlement was situated on an isolated island in the middle of large open water areas.

Remains from the prehistorical and the historical time

Inside the actual co-operation area of Archipelago National Park, no Stone Age settlements have been found so far, but there are about forty burial mounds from the Bronze Age and Iron Age. Two fort islets from the prehistoric times have also been recognised in the archipelago, possibly dating back to the Iron Age.

The most characteristic antiquities of the archipelago are relics from the historic times, from the end of the Iron Age until the 1700s and 1800s. These immovable relics are also protected by the Antiquities Act.

Burial mounds, also called barrows, are probably the best-known and the most impressive relics from the prehistoric times. These cairns have been built during the Bronze Age and the Iron Age from stones which "a man is able to lift". The size of these barrows varies, the diameter of some low cairns is a few metres, but some are tens of metres long and a couple of metres high.

In the beginning of the Bronze Age, dead bodies were buried in these barrows, but later it became the custom to burn the dead body. In some of the graves, there are jewellery or weapons. In others, there are no artefacts, or they have not been preserved. The Finnish folksy name for these cairns translates literally as "Devil's sauna stove".

Burial mounds have been found in all parts of the archipelago, on islands of various size. However, most barrows have originally been built on larger islands, which have later become even bigger due to the land uplift.

Often the burial sites have been chosen so that they stand out from the surrounding landscape, such as rocky hills or tops of the islands, with a view to the sea. Choice of the burial sites has possibly been related to local traditions of prehistoric communities, and to the significance of natural formations as landmarks.

The burial mounds in Archipelago National Park are low and quite small heaps of stones, which have been built near the highest place of the islands, but not on the very top. Some graves are near the shore, and some are organised in groups of several cairns. Most of the burial mounds in Southwestern Archipelago, if not all of them, are from the Iron Age.

It is not easy to tell by these barrows anyhing about the locations or nature of the ancient settlements. Inside the co-operation area of Archipelago National Park, most graves have been found on the large islands of Nötö and Hitis. Already in the Iron Age, these areas bristled with islands, from which it was not a long way to go fishing or seal hunting in the outer archipelago. This area, with favourable natural conditions, may well have been inhabited already in the Iron Age.

Antiquities which are related to fishing

Naturally, many archeological findings in the outer archipelago have something to do with fishing as a source of livelihood. These include "tomtning" remains from the temporary dwellings of the fishermen, tracks for dragging boats across the land, labyrinths, stone stoves, and marks carved onto rocks.

"Tomtning" remains are related to overnight shelters or storage constructions built by our ancestors on their seasonal fishing trips. Because their fishing trips were long, shelters were needed in the harsh conditions of the archipelago. The rock walls of these temporary shelters were piled up surrounding level open floors, and they can still be seen today in many places. Sometimes natural formations, such as cliffs, were used as a part of a shelter.

In the municipality of Korpo, on the village island of Jurmo, are located the most studied antiquities in Southwestern Archipelago: so called monk rings. Interpreting these four stone circles has been tried already in the 1700s, when it was suspected that they were made by monks from the village of Kökar. It has been found that Franciscans really lived on Kökar Island from the end of 1300s to the 1530s. So it might well be the case that the monks built these stone rings on their fishing trips, for example. Why did they do so, is still not known.