A Cross-section of a Charcoal Pit

On Mäntypolku Trail the cross-section of an old charcoal pit is a rare look at what life was like in wartime Finland. The pit is located at Kaunisniemenkangas a bit over a kilometre from Suomu Nature Information Hut.

Especially in Eastern and Northern Finland, the dates of important events have been carved into the sides of pine trees. First, the outer and inner bark was removed from the side of the tree in order to uncover a surface on which to carve the message.  Initially, in the 19th century, the dates of a deceased person's death were carved into the sides of the trees to keep them from coming back to haunt their homes. Later a memorial tree might also be dedicated to other noteworthy events, such as a successful bear hunt, ownership of a slash-and-burn area, or a location for cutting swamp hay. 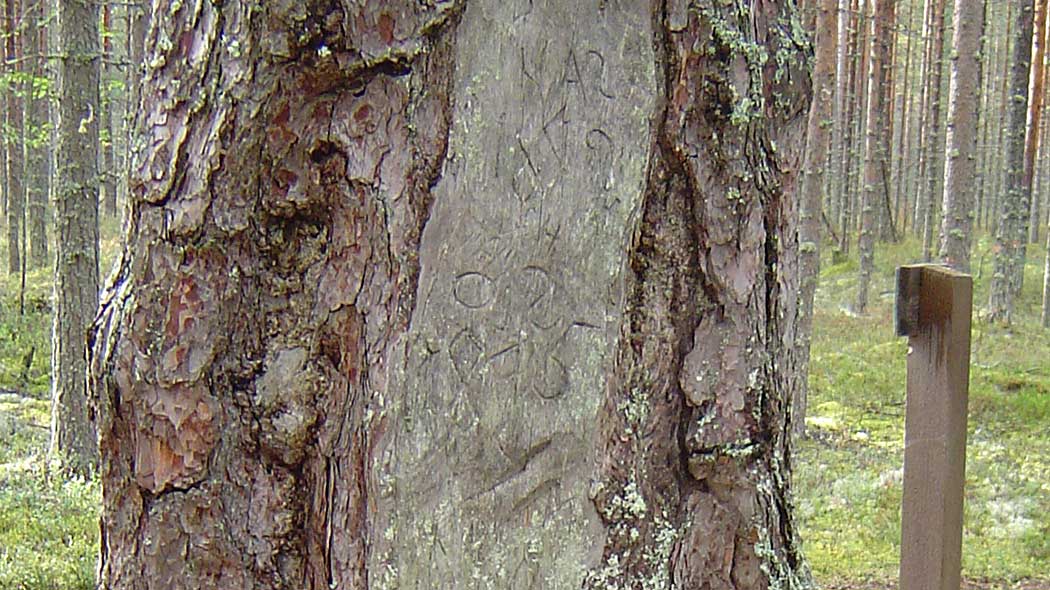 A good “calendar tree” needed to be old, but still alive. The tree heals the wound it sustained by growing bark along the edges of the cut. Some memorial pines are still standing, either alive or dead. One of the most impressive memorial pines in North Karelia is located near the Suomu Nature Hut. Two signs concerning the family of the Suomu forest rangers with numerous markings have been found there. The dates of death of both sons of Olli Siponen, the first forest ranger in Suomu, have been deciphered. One of the boys, Olli, died at the age of 12 on 4 November 1875 and the other, Matti, died at the age of 21 on 20 February 1895. The most recent carving is from 1973, when Armas, the brother of the last Suomu forest ranger, died in Sweden, where he was working at the time.