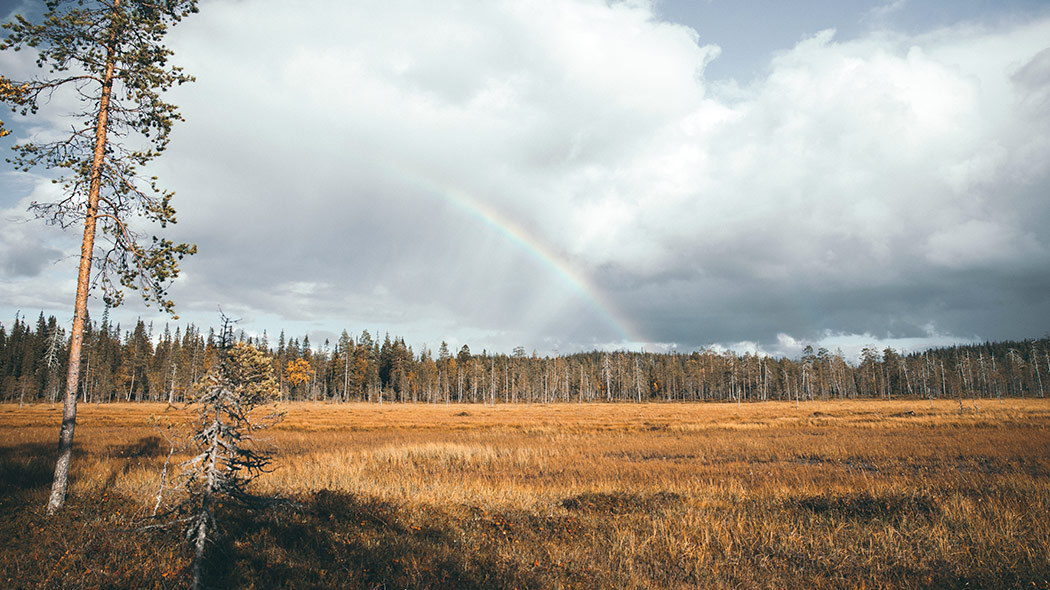 In the snow-free season, hiking time 5 to 7 days
A difficult trail because of its length and varying condition of the paths.

Hiking structures
There are several rest stops on the trail, including campfire huts, lean-to shelters and a day hut.

Trail description
The national UKK hiking trail goes through Sallatunturi area. The Karhunkierros trail coming from Kuusamo direction turns into the UKK trail to the north of Hautajärvi. It leads through the municipality of Salla and all the way to Tulppio in Savukoski. The trail is marked with red plywood signs. The 45-kilometre section between Hautajärvi and Sallatunturi is called Topsakantaival.

The UKK trail is a national hiking trailed named after President Urho Kaleva Kekkonen. It goes through North Karelia, Kainuu, North Ostrobothnia and Lapland. Its endpoints are located in Koli, Lieksa in the south and Tulppio, Savukoski in the north. 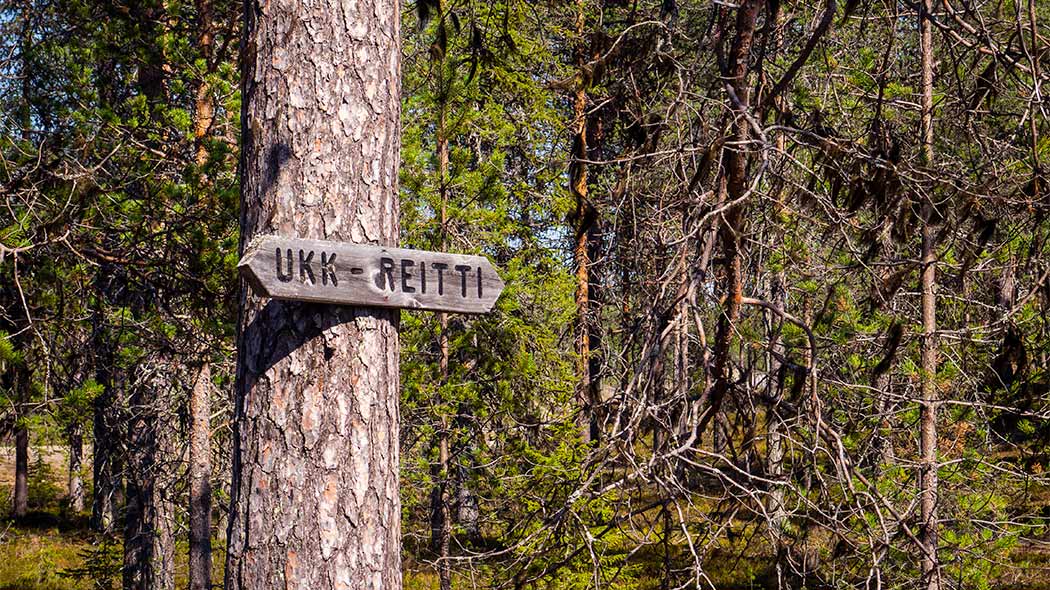 The UKK trail can be hiked in sections:

Hautajärvi-Tervanpolttamalammit, 11 km (Topsakantaival, section 1)
The initial section of the trail goes through private lands and is maintained by the municipality of Salla. When leaving Hautajärvi, the trail goes across Koutajoki road bridge. After the bridge, it turns west onto a forest road and follows this road for one kilometre. The trail goes through Kirjavanviita and Kirjavanjänkä. Before Isoviita local road, the trail crosses an old field. In Isoviita it again follows the road for more than a kilometre. In Vantturimmet duckboards mark the trail, which follows a snowmobile route. Before Kaartisselkä there is a road section of almost one kilometre, after which the trail finally dives into a young pine forest and follows old machinery tracks to Tervalampi campfire hut, which is maintained by the municipality of Salla.

Tervanpolttamalammit-Konttilampi, 7 km (Topsakantaival, section 2)
From Tervanpolttamalammit the trail continues towards Puupalovaara hill and climbs up its slopes after crossing a forest road. Higher up, the forest consist of old pine trees. An old post route, which was still used before the Second World War to carry mail between Niemelä and Aholanvaara villages, also ran through these parts.

The climb continues and a view opens out to the east. Trees bent down by crown snow loads can be seen beside the trail. The UKK trail now reaches a fell area with harder ground, and one of the peaks of Palotunturi fell with its spruces forests rises ahead. The trail goes down a slope, and water can be glimpsed through spruce trees; the waters of Pikkukonttilampi lake glimmer ahead. As the wilderness lake is left behind, the trail continues to descend through a dark spruce forest. Large old pine trees gradually appear on the horizon, and finally water can be seen: Konttilampi lake with its shoreline pines welcomes the hiker. Konttilampi campfire hut is located on the shores of this small lake.

Konttilampi-Aikkipetsi, 12 km, (Topsakantaival, section 3)
From Konttilampi campfire hut the trail once again climbs up to a fell where low spruce and birch trees manage to survive all the way up. There are marshy hollows on the slopes. Palotunturi fell also has a viewpoint for admiring the landscapes opening out to the east. Large fells, such as Kieskistunturi and Possolitunturi, are visible across the border, and the village of Niemelä can be seen lower down on a glimmering lake. A short distance away, there is a small pond on the fell summit with Palotunturi campfire hut beside it.

As the trail leaves the hut, the fells are left behind, and the path descends to the large mires of Topsakka, which comprise the Löytöjänkä-Suksenpaistama Mire Reserve. The trail crosses a grassy mire along Topsakkaharju esker; where solid ground ends, hikers can rely on duckboards. There is a small campfire site at the tip of Topsakkaharju esker, with Topsakkajärvi lake glimmering nearby. There is no toilet at the campfire site. In former times, there was a bird tower on this site. Legend has it that a number of ancient pits for trapping deer where found in Topsakkaharju. The last remaining hunting pit saved from erosion can be seen beside the trail, with a fence around it to keep it safe. Suksenpaistama lean-to shelter is located at a distance of three kilometres from this campfire site on Suksenpaistamalampi lake.

There is a grey barn in the old fen meadow of Topsakka as a monument to work carried out here more than a century ago. In those days, feed for cattle was almost exclusively obtained from natural meadows. The meadows were far away, and hay-making took several days. The workers lived in huts, sometimes a campfire hut roofed with bark. The journey of hay-makers from Kallunki village to Topsakka led between Palotunturi and Isovaara. A horse was used to transport the hay for livestock in winter. The mowing of natural meadows for hay also continued for a few years after the Second World War.

The UKK trail leads from Suksenpaistamalampi on the western slopes of Aikkipetsi directly to Vilma forest road. The distance to Aikkipetsi day hut on a lakeshore is only one kilometre. 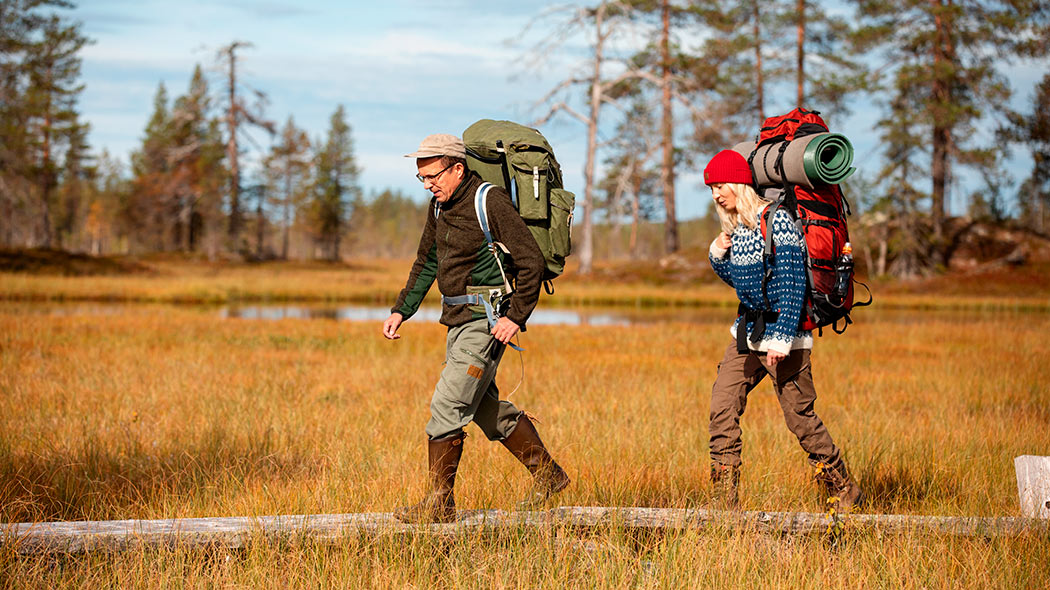 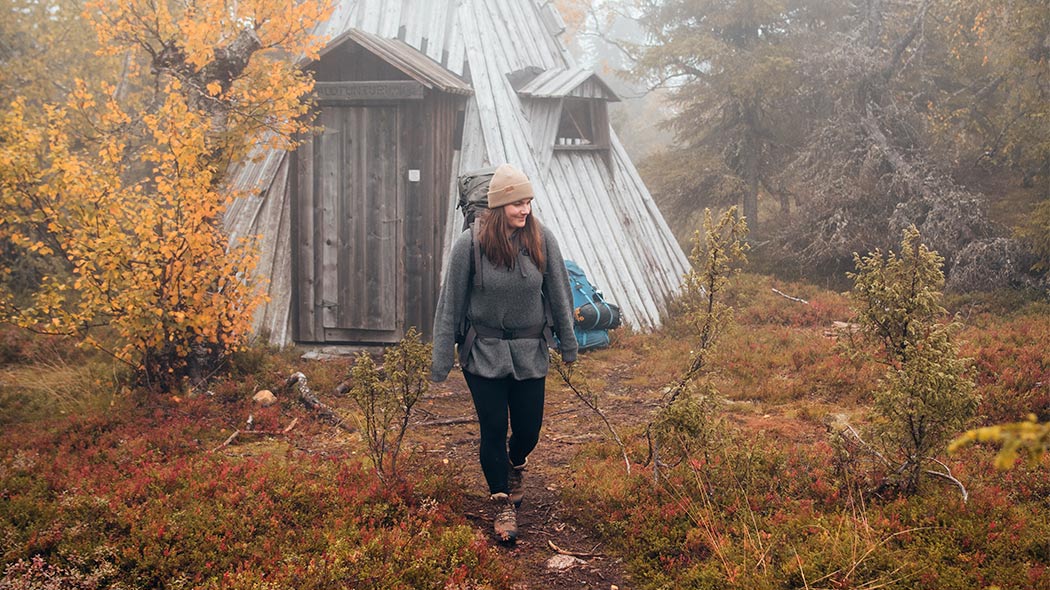 Aikkipetsi-Sallatunturi, 15 km (Topsakantaival, section 4)
From the day hut, hikers can choose between two routes towards Sallatunturi. You can either continue along the Aikkipetsi trail past Paltsarikumpu, or select the actual UKK trail, which runs east of Ruuhitunturi via Siskelilampi. At Ruuhitunturi, you can also select a trail that climbs to the top of the fell.

The UKK trail climbs from Aikkipetsi day hut to Kuusikko-Ruuhivaara, and on the north side of this hill, it branches off the Aikkipetsi and Ruuhitunturi routes and leads to the east towards Siskelilampi campfire hut. From Siskelilampi the trail continues through a rolling terrain to large mires, from where it meanders along duckboards to the flanks of Kolmiloukkosenvaara hill. From here it goes on to Kolmiloukkonen lake and Kolmiloukkonen lean-to shelter 1. The Aikkipetsi trail from Aikkipetsi day hut via Paltsarikumpu and Hanhivaara rejoins the UKK trail before Kolmiloukkonen lake and also crosses the border of Salla National Park. 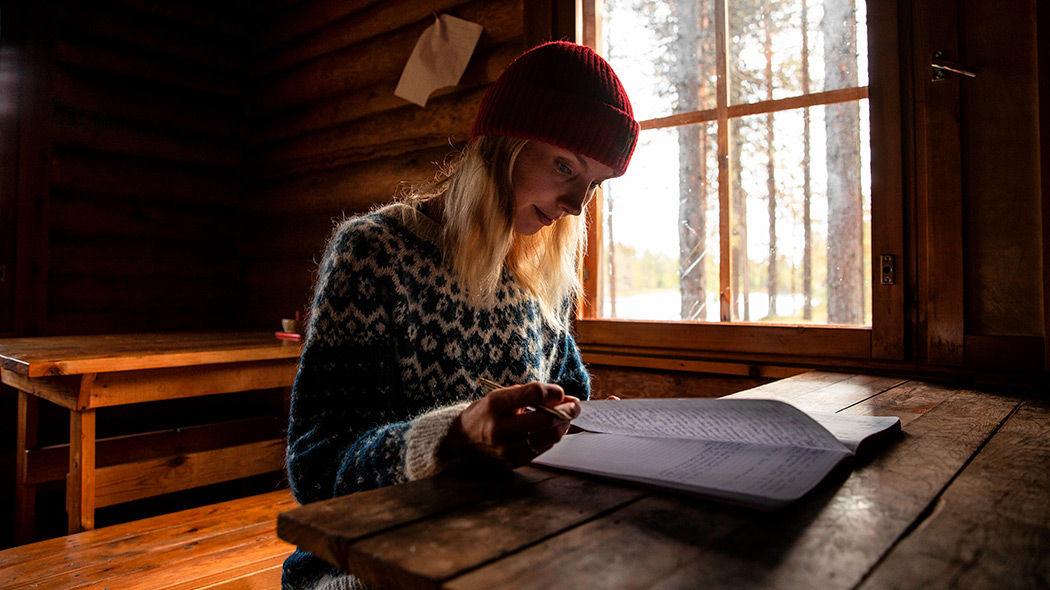 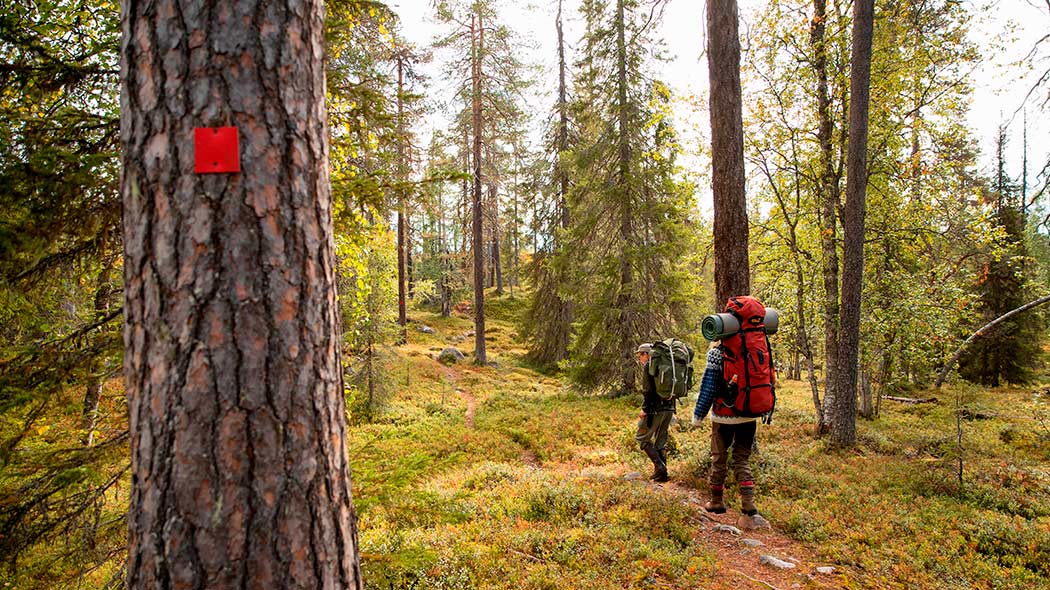 Sallatunturi-Pitkälampi, 10.5-11.5 km
Most of this section of the UKK trail runs through Salla National Park. When leaving Sallatunturi Resort Centre and heading on towards Aatsinginhauta, you can choose between two options. The distance to Pitkälampi is 10.5 km along the northern route and 11.5 km along the southern route. The trails join back together at a junction about 700 metres before Pahakuru ravine.

Northern route: The northern option takes you along the side of the fell to Kaippahanoja day trip hut, which is located high up on the wooded slope, and on through spruce forests towards Pahakuru and Pitkälampi.

The trail descends from Pahakuru to the bottom of Aatsinginhauta valley. On Pitkälampi, there is a campfire hut and a campfire site on the edge of an old-growth forest. Pitkälampi is a beautiful mire lake, and from its shores you can see the steep slopes of Julmoiva hill in Aatsinginhauta. The contours of Aatsinginhauta, which are clearly visible on the map, are hard to see in the terrain. As the valley is large and covered with trees throughout, it mostly looks like a hill formation. 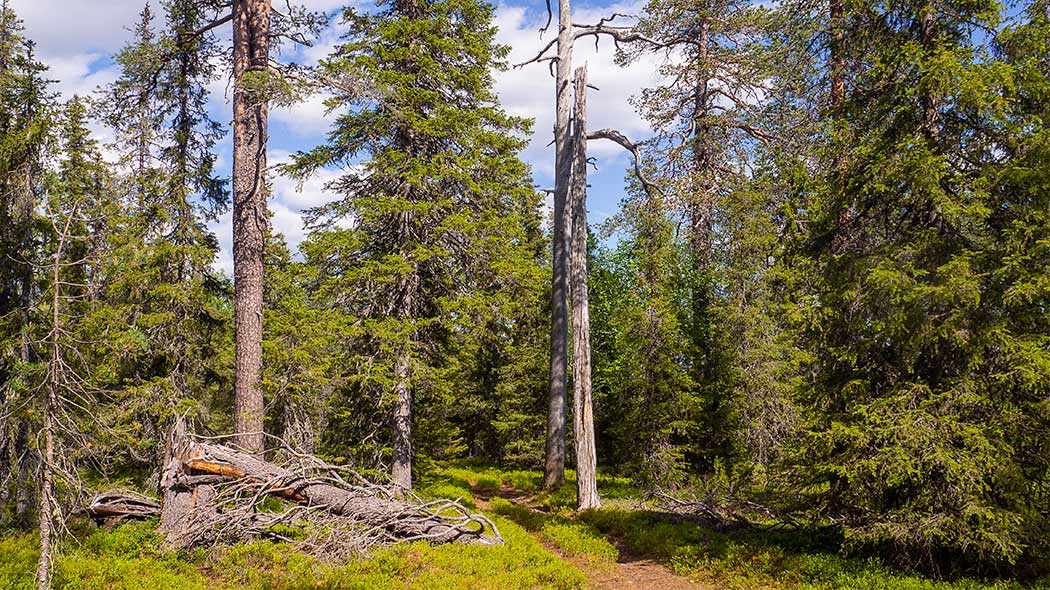 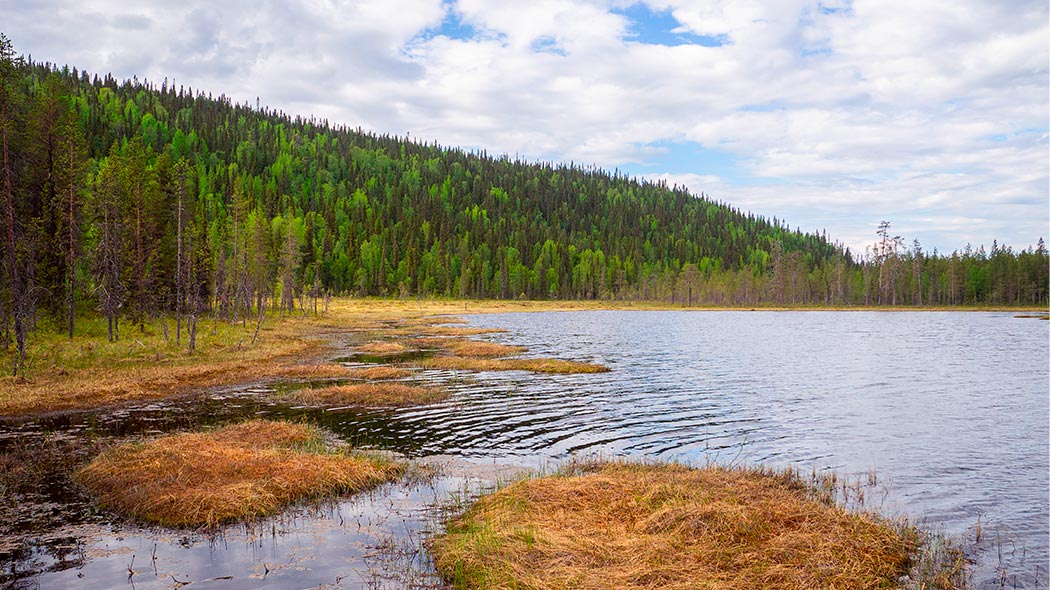 Pitkälampi-Kelloselkä, 18.5 km
Pitkälampi and the duckboards after it offer great views of Julmoiva hill slopes on the left. After the steep slopes of Julmoiva hill, the trail goes on through beautiful old spruce and birch woods. The trail winds its way through rather difficult terrain at the bottom of the valley, surrounded by hills and later commercial forests. The trail is difficult to see and walk along in places, and this area is slightly overgrown. Before the Aatsinginjoki River, the UKK trail reaches a forest road and the last rest stop of the trail, Koutalampi lean-to shelter (formerly called Aatsinginhauta lean-to shelter). The trail goes on along an unpaved road to the village of Aatsinki. Finally, a beautiful view of the village and lake nestling between large hills opens out. From the village, you can continue along the road to Hanhikangas in Kelloselkä, where the trail crosses a railway line and reaches the Salla–Kelloselkä road (Road 82).

In Hanhikangas you can still see tree stumps going back to the war times on the sides of the main road. The Russians followed this route during the Winter War when marching to the west. The troops were sustained by supplies from the old Salla village. Finnish troops did their best to disrupt the enemy’s supply lines, which is why the Russians had to fell roadside trees to protect the transport operations.

The UKK trail continues through the eastern parts of Salla to the north of Kelloselkä and towards Tulppio and Nuortti. The trail marking is missing between Kelloselkä and Karhutunturi and there is no forest path for this part of the trail. 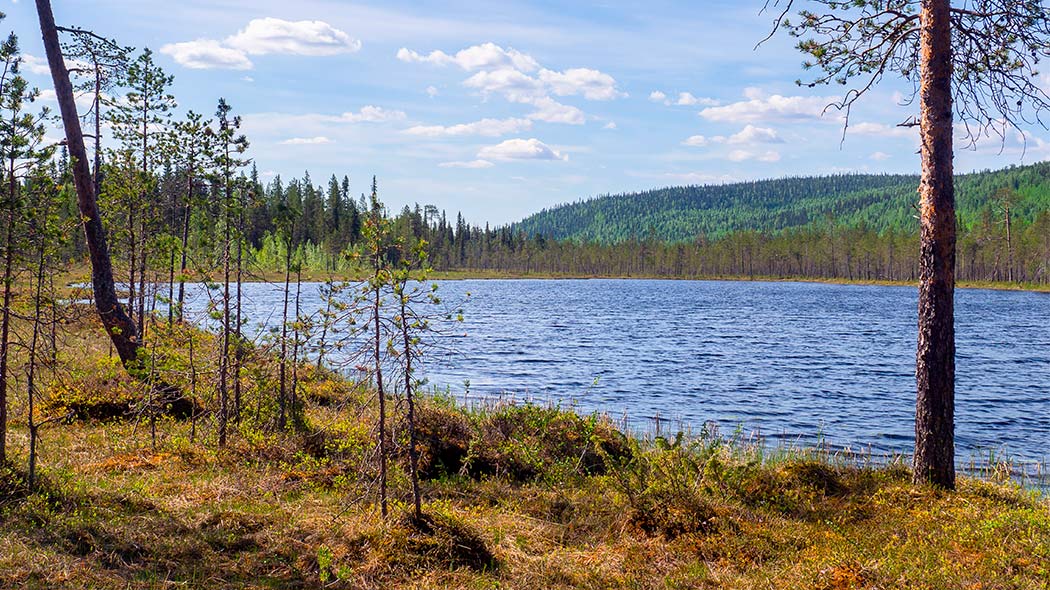 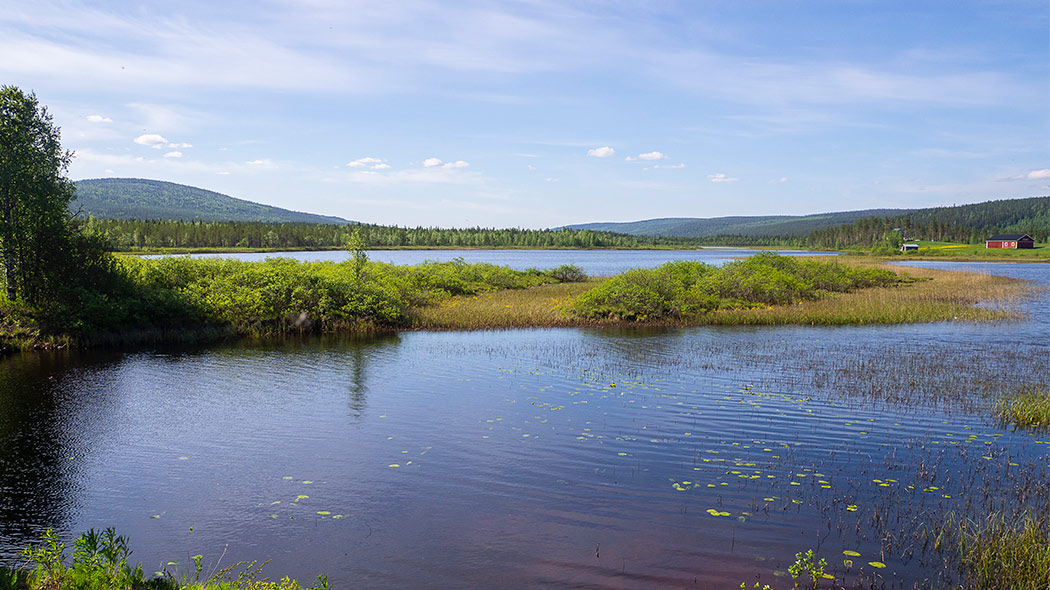 Please note
The terrain is demanding, and solid hiking experience is needed on many trail sections. The trail mostly runs through uninhabited forests, and on several sections you need a map and compass to check that you are going in the right direction. The path may be difficult to see and overgrown in a few places. The trail is partly in areas without mobile phone network coverage.

Visitors should bring hiking gear suitable for the weather conditions, consisting of proper hiking shoes, weatherproof clothing, spare clothes, a map, a charged phone, and enough to drink and eat. There are natural water sources along the trail, but as the water quality in them is not tested, the water should always be boiled before use. In rainy weather, we recommend rubber boots or waterproof hiking shoes, as the trail may be wet in places. You should bring matches if you intend to light a fire, and your own toilet paper.