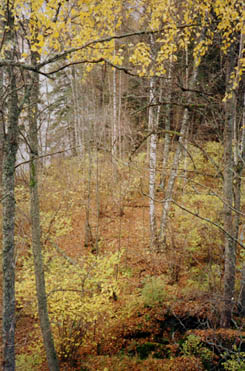 On the southern shore of the Cape Karkalinniemi, about three kilometres from Karkali Strict Nature Reserve, is located a unique natural sight: Torhola Cave and Pitkänperänlahti Nature Reserve form a combination of rock, cave and herb-rich forest, which is exceptional in Finland. Torhola limestone cave is a popular attraction, and you can get there by following a trail which separates from the road going to the Cape Karkalinniemi.

The Largest Limestone Cave in Finland

In the western part of the rock area, which is located on the steep southern side of the Cape Karkalinniemi, there is the largest cave in Finland. The cave is about 30 metres long in total. Until about half way it is quite wide, but towards the end it gets narrower. Be careful, if going into the cave! The flora in the rock area of Torhola Cave is unique. In the herb-rich forests, on the slopes descending to Lake Lohjanjärvi, grow, for example, the Wych Elm (Ulmus glabra) and the European White Elm (Ulmus laevis). The calciferous soil of the rocky hill is rich in nutrients, and the shadowy cliffs also offer exellent conditions for many other demanding plants. Plant species growing in the area include the Teesdale Violet (Viola rupestris), the Basil thyme (Satureja acinos L.), and the Maidenhair Spleenwort (Asplenium trichomanes). The set of fungus species is remarkable, for example, the threatened Limacella guttata, Rhodocybe gemina, Kavinia himantia and Gyromitra warnei grow there. Rare species of the area include the moss Plagiomnium rostratum, the lichen Solorina saccata and the Bird's-Nest Orchid (Neottia nidus-avis) . The endangered beetle Pseudonostirus globicollis is a rarity of insects, which lives in the area of Torhola Cave.

The area of Pitkänperänlahti Bay is included into the Shore Conservation Programme. Common hazels (Coryllus avellana) grow in shoreline herb-rich forests and there are open flood meadows, and flood meadows on the waterside with black alder (Alnus glutinosa) growing in them. The Yellow Woodland Anemone (Anemone ranunculoides), the Dog's Mercury (Mercurialis perennis) and the Wood Stitchwort (Stellaria nemorum) also grow in Pitkänperänlahti area.