Karkali Strict Nature Reserve is famous for its large hazel groves, impressive linden forests, and rare plants. The area is an ideal destination for a nice day trip, especially in the spring, when anemones and other spring flowers are glorious. Later in the spring and summer, the leaves of the common hazels (Corylus avellana) form a canopy over the trail. Karkali is also a good place to go bird watching. There are about 40 nesting bird species in the area, and as many as a thousand nesting couples. 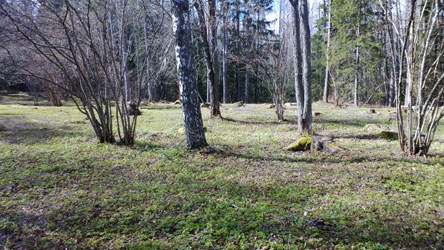 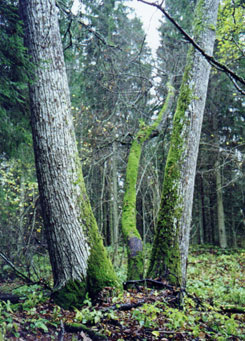 Karkali Strict Nature Reserve is located in the end of the Cape Karkalinniemi, which projects far onto Lake Lohjanjärvi. The diversity of the herb-rich forests on the steep-sided Cape Karkalinniemi is due to the favourable climate, and the rock foundation being rich in chalk. Therefore the vegetation is lush, and so it is in the other protected areas on Cape Karkalinniemi, such as Pitkänperänlahti area. Near the strict nature reserve, you can see limestone rocks, and on the Cape Karkalinniemi there is also the largest limestone cave in Finland, the protected Torhola Cave, where the rock has been eroded by water. The climate is favourable because the period of growth is the longest in Finland, and the annual rainfall is relatively high.

Karkali Strict Nature Reserve belongs to the southernmost vegetation zone in Finland, the so called oak forest zone. As much as 99% of the strict nature reserve is forest, most of which is lush herb-rich forest. In addition there is a 0.02 sq.km of mire, one meadow, several rocky slopes, and cliffs in the area.

Oak forest zone vegetation is found in Finland only around Lake Lohjanjärvi, on Åland Islands, and as a narrow ribbon on the southern coast. These herb-rich forests were inhabited early, and influenced by agriculture, so there are not many such areas left. Karkali is the largest herb-rich forest area on the mainland.

The Lush Vegetation of Karkali

Anemones blossom in Karkali in the spring. The Hepatica (Hepatica nobilis), the Wood anemone (Anemone nemorosa) and the Yellow Woodland Anemone (Anemone ranunculoides) cover the ground as a thick layer. Also the Common Wood Sorrel (Oxalis acetosella), the Dog's Mercury (Mercurialis perennis) and the Lungwort (Pulmonaria obscura) grow in Karkali, as well as the Mountain Currant (Ribes alpinum) and the Fly Honeysuckle (Lonicera xylosteum) bushes. In total, there are 380 vascular plant species and 210 moss species in Karkali. 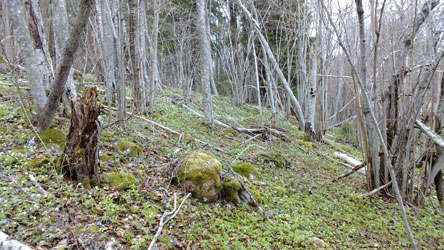 Fortunately, Karkali area has been famous for its rare plants for a long time. Elias Lönnrot, the collector of traditional Finnish oral poetry, was also a botanist who made the first botanic collection in Finnish in the 1800s, and found samples in the area. For example, 11 rare orchid species grow in the area, such as the Red Helleborine (Cephalanthera rubra) and the Bird's-nest Orchid (Neottia nidus-avis).