Reminders of the Inhabitants in the Past

There have been permanent inhabitants on Cape Karkalinniemi already in the 1500s. Since then, people have influenced their environment, and the natural features of the area. Slash-and-burn agriculture was practiced in the area, land was cleared for fields and farming, and meadows were mowed and pastured. In Karkali, trees were also felled for making wood charcoal, for example. Nowadays, walking along the trail, which goes around the area, you can see remains of an old charcoal pit in the northwestern part of the strict nature reserve. It is a round and flat platform, higher than its surroundings, and spruces grow on top of it. Until 1950s, loggings were carried out and cattle grazed on Cape Karkalinniemi.

In the area of the strict nature reserve, there have been three crofts: Lepola, Tuomihieta and Kukinhuone. The oldest one of them, Kukinhuone Croft, has been ruined since 1800s. The latest inhabitants in Karkali lived in Lepola Croft until the 1910s. Now you can only find remains of the fireplace of Lepola, a heap of stones in a dense spruce forest.

The Era of the Archbishop

Around 1900, Karkali was also known as the place where Archbishop Johansson used to spend his summers. He got trails cleared in the herb-rich forests of Karkali for picking nuts. A summerhouse was built in the end of the Cape Karkalinniemi in 1902 to serve as a base for nut-picking trips. There was a nice view from the summerhouse over the lake landscape towards the church of Karjalohja. Today there are only foundation stones of the house left and the landscape is almost overgrown by trees.

Both the Archbishop and his son Kustavi Kaila loved nature, which is probably the most important reason why the vegetation of the strict nature reserve has survived. They tried to protect the rare species of the Cape Karkalinniemi, and to conserve its natural features as much in the natural state as possible. 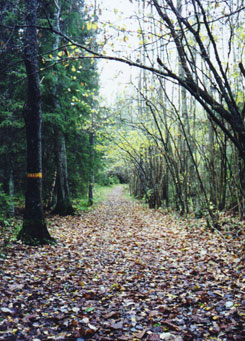 There were changes in the ownership of the Cape Karkalinniemi in the end of 1950s, and plans were made to build, for example, a holiday village and an outdoor recreation area there. After a public discussion, however, the state aquired an area of 1 sq.km. for nature conservation, and Karkali Strict Nature Reserve was established by law in 1964. The area was managed by the Finnish Forest Research Institute until 2002, and since then it has been managed by Metsähallitus.