The Silent Decomposers of Dead Wood

Vaarunvuoret is known for the majestic Vaarunjyrkkä cliff that descends sharply into Korospohjanlahti Bay. On the other side of the area is the Oittila brook-side grove, which was originally the first nature reserve in Central Finland (established in 1946). Vaarunvuoret is home to an extraordinary number of endangered and rare species, making the area a popular spot for nature enthusiasts.

A Wealth of Species

Roughly 60 endangered species or those listed in the national watch list have been spotted in the Vaarunvuoret area. Endangered species from all the studied groups have been found here: vascular plants, mosses and lichen, polypore, insects, mammals and birds. Several southern and northern species also meet in Vaarunvuoret, having reached the limits of their distribution. The northern-most European hazels (Corylus avellana) in Finland grow in the Oittila elm grove and the bordering Vaarunniitty meadow. The Scots elm (Ulmus glabra) also grows at the very limit of its distribution here. Sheep's bit (Jasione montana) is a southern species that can be seen on the Vaarunjyrkkä cliff, along with plants native to the fell area: glaucous bluegrass (Poa glauca) and alpine saxifrage (Saxifraga nivalis).

The area's wide range of different habitats makes the diversity of species possible. For example, the area boasts lush herb-rich forests and fens as well as old pine forests, sun-drenched forest edges, cliffs and meadows. The most significant habitat for the endangered species of Vaarunvuoret is the steep rocky slope that descends into Korospohjanlahti Bay. The southern flank is an open and warm place to grow. The bedrock consists of alkaline amphibolites that release important nutrients into the soil. The nutrient-rich soil enables the occurrence of many demanding species, such as the broadleaf helleborine (Epipactis helleborine). Several insect and polypore species are dependent on the decaying wood which is found in abundance on the hill. 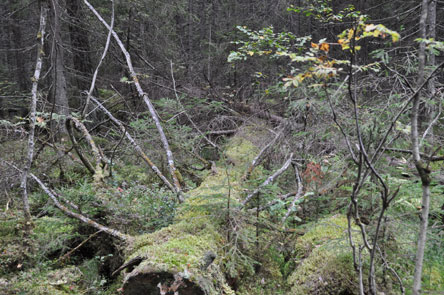 Many common forest mammals, such as bank voles (Clethrionomys glareolus), red squirrels (Sciurus vulgaris), mountain hares (Lepus timidus) and moose (Alces alces), thrive in Vaarunvuoret. The Russian flying squirrel (Pteromys volans), Eurasian lynx (Lynx lynx) and brown bear (Ursus arctos) also belong to the area's mammal species. The birdlife mainly consists of hole-nesting species and those that favour old-growth forests. An observant hiker will most likely detect the drum roll of a woodpecker or the flutter of the wings of a grouse taking flight. In addition to the more common great spotted woodpeckers (Dendrocopos major) and black woodpeckers (Dryocopus martius), the area is home to the lesser spotted woodpecker (Dendrocopos minor), the three-toed woodpecker (Picoides tridactylus) and the white-backed woodpecker (Dendrocopos leucotos). The eagle owl (Bubo bubo) can also be heard hooting in Vaarunvuoret, and in late winter, you can listen out for the display song of tengmalm's owls (Aegolius funereus). Other interesting bird species in the area include the nightjar (Caprimulgus europaeus), honey buzzard (Pernis apivorius) and red-breasted flycatcher (Ficedula parva).

The Silent Decomposers of Dead Wood

Polypore and beetle species often go unnoticed in the forest, with the more attractive plants or loud birds catching the eyes and ears of hikers. However, they are vital to the entire forest community, for they feed on dead wood and facilitate the circulation of nutrients. These inconspicuous groups of species are often closely connected to one another. Examples of the fungivorous beetles in the area are the Peltis grossa that feeds on wood decomposed by the polypore Fomitopsis pinicola, and the highly endangered Dircaea quadriguttata that feeds on the white rot caused by Fomes fomentrarius on birches. Other interesting beetle species in Vaarunvuoret include the threatened Eucnemis capucina living in the cavities of aspens and the Exocentrus lusitanus that thrives on the fallen limbs of small-leaved linden (Tilia cordata). Vaarunvuoret boasts the most diverse range of polypore species of all the protected areas in Central Finland.