Saariselkä, Saaritunturit, Koilliskaira is the territory of the local reindeer herders' cooperative and a paradise for hikers, a Sámi Homeland and a popular hiking destination. Today, reindeer paths and hiking trails crisscross the area in perfect harmony. The wilderness, described as the most fabulous fell area in Finland, was given a seal of protection in 1983 when the Urho Kekkonen National Park was established. 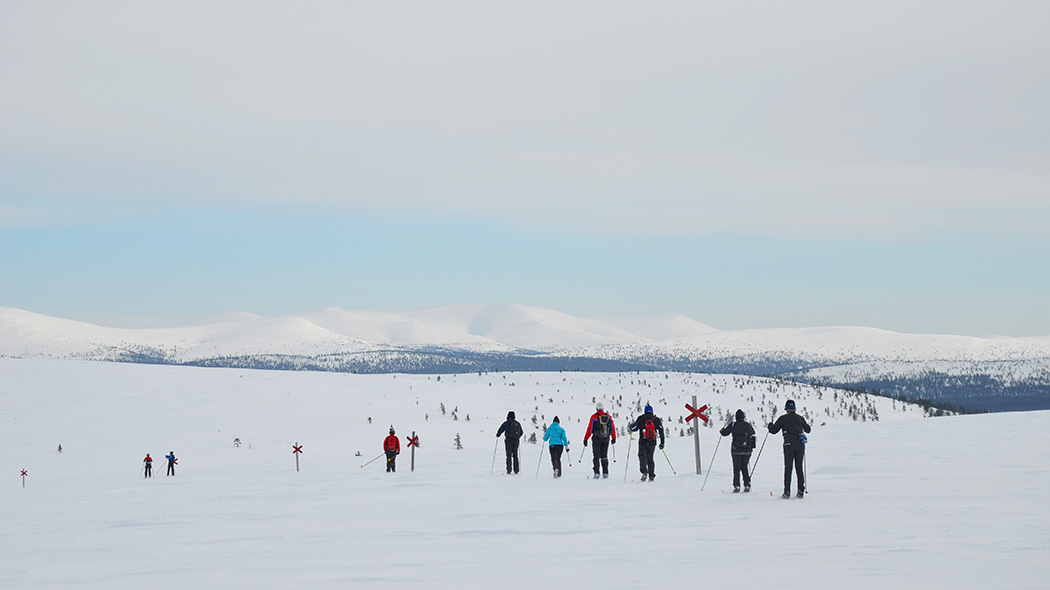 Saariselkä originally meant an extensive fell area. Today, it is particularly well known as a tourist centre next to a main highway, only thirty kilometres or so from Ivalo airport. Regular flights to Ivalo began in the 1950s.
The road to Ivalo was completed in 1914.  Before then, the Ruijanpolku trail, reportedly the oldest trail in Lapland, ran along the west side of the Saariselkä fells. Ruijanpolku was used by the tax authorities and merchants, the clergy and the general public when travelling across the fell region to the Arctic Ocean. Today, the Ruijanpolku trail has been restored and marked as a hiking trail from Sompiojärvi to Laanila.
Completed in 1912, the Laanila inn was the region's first accommodation enterprise. The Lower Kaunispää Cabin was moved from Rovaniemi to the headwaters of River Kaunispäänoja and opened for tourists in 1949. The Upper Kaunispää Cabin was built in 1952 on top of the Kaunispää fell. Prior to that, the only buildings on the top were a small fire guard hut and a wooden lookout tower. Built in 1955, Sininen pirtti (the Blue Hut) was the first restaurant in Saariselkä. 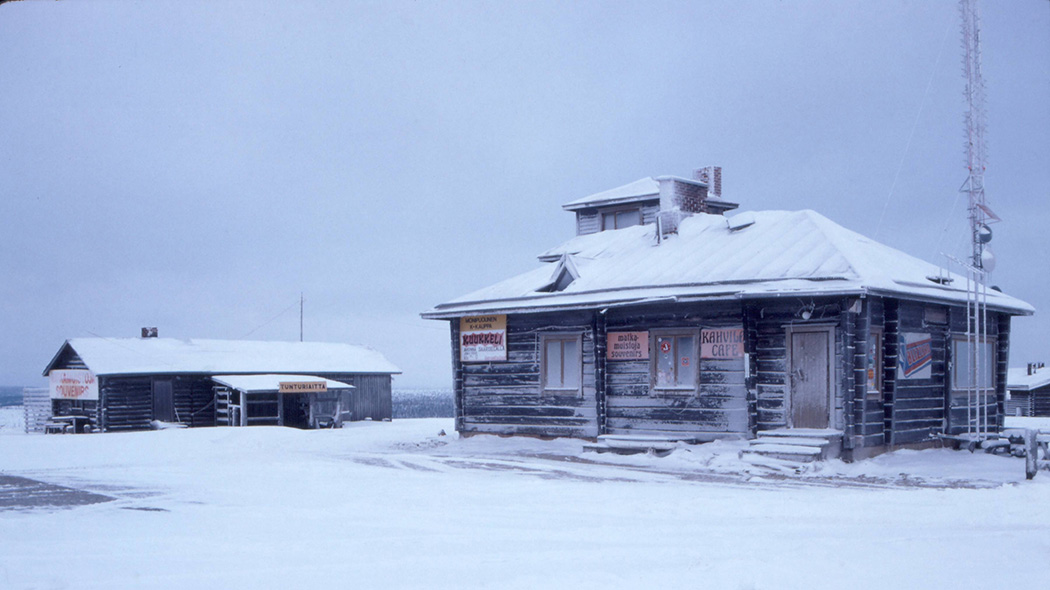 Thanks to the development of tourism, the range of restaurants and accommodation services has grown over the decades. Many companies and private owners have also built recreational huts in the area. 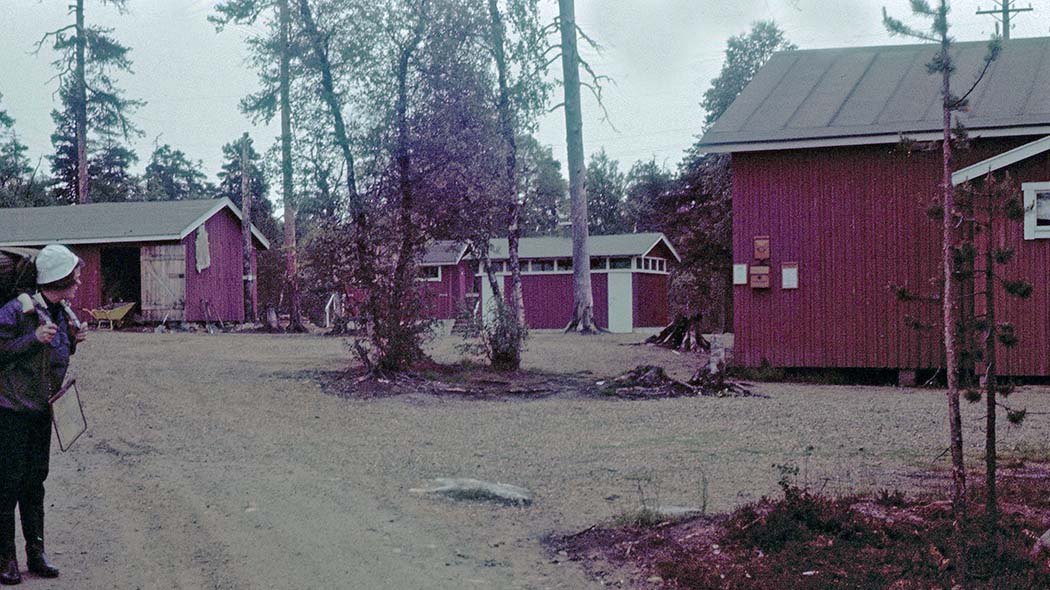 The first ski lift in Saariselkä was completed on Kaunispää fell in 1970. More services are now provided in response to the challenges posed by the growing number of tourists. In 2016, Kaunispää and Iisakkipää have a total of 15 different slopes. The environs of the Saariselkä tourist centre offer a total of approximately 200 km of maintained ski trails in winter and marked hiking trails in the summer. Marked snowshoe trails are also available for hikers. In the summer, these are nature trails with information boards. 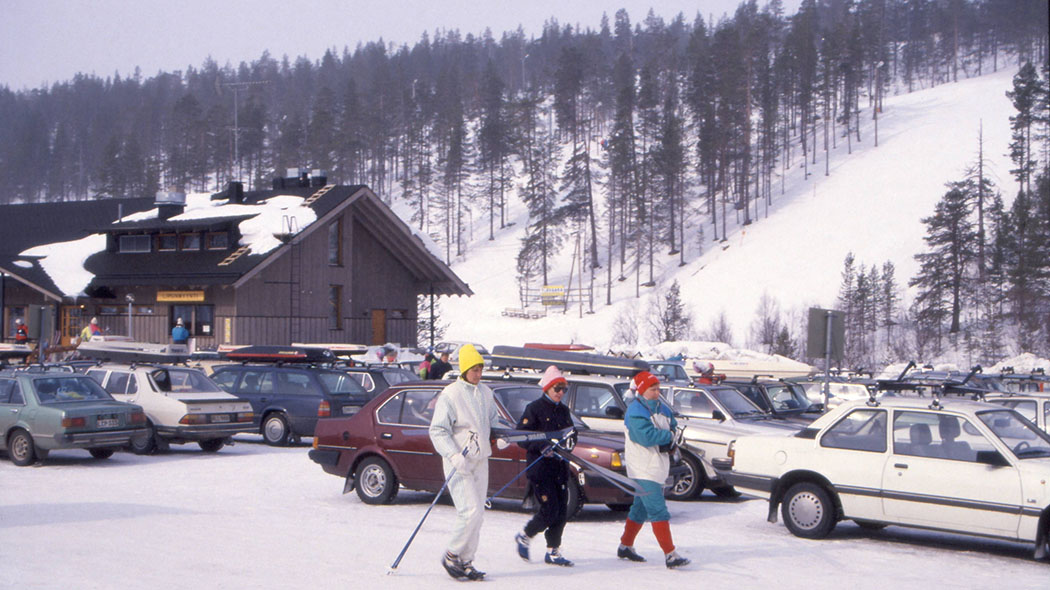 Many hikers return to Saariselkä year after year to ski on the glittering snow in late winter, to admire the splendour of the autumn colours, or to enjoy the midnight sun in Lapland. Shaped by the last ice age, the area of round-topped fells offers easy access and attracts hikers to enjoy the rugged northern nature. 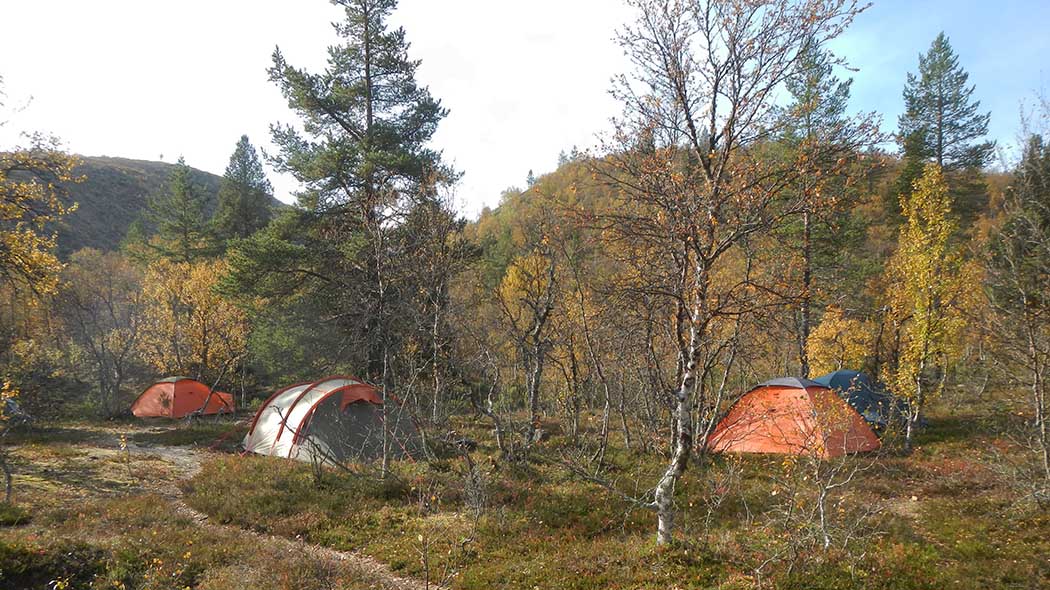 Nature and the environment and a wide range of nature activities are the key reasons for visiting Saariselkä. The Saariselkä tourist centre was specifically built for tourism purposes, to provide a range of services for nature lovers, tourists and hikers in wonderful scenery, no matter the season. Today, the Saariselkä area is an international tourist destination.
The construction and development of the area, which began in the 1960s, has turned this resort, the northernmost in the European Union, into a highly popular travel destination. Construction has focused on a compact planning zone, to keep the services close by. Another purpose of this is to protect the beautiful fell area and preserve the fragile northern natural landscape as close to its original state as possible.

The northern side of the Saariselkä fells belonged to Inari Lapland. The Lapp villages of Sompio and Sodankylä were located on the south side of the fells. The ancient livelihood of reindeer herding is still a major business in the area. Reindeer fences and other structures, and of course reindeer, are signs of reindeer herding in the area. Since the fell area is a winter pasture for  reindeer, very few reindeer frequent the fells in summertime. 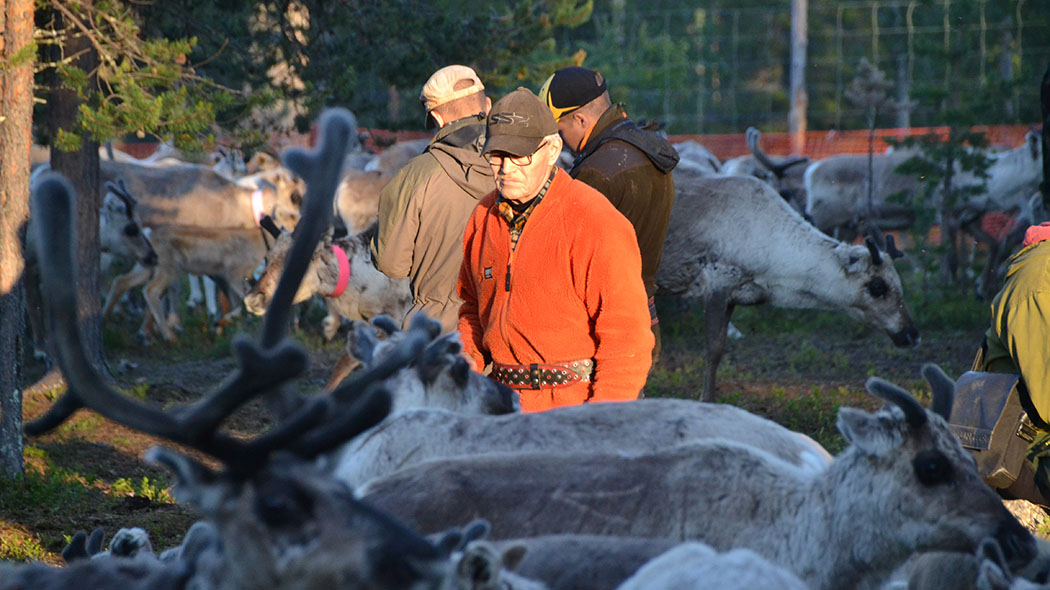 Reindeer husbandry is a livelihood developed by the Sámi and the place names reflect the Sámi culture. Some of the names are directly derived from the Sámi language. For instance, Muorravaarakka comes from the North Sámi language: Muorra means tree, and the word ‘vaara' comes from the word várri. If you have been to Muorravaarakka, you will know that it is a river valley with lots of trees.
The River Muorravaarakkajoki originates in the rugged scenery of the highest fell in the area, Sokosti (718 m asl), and the water flows into the River Suomujoki. The yoik of Orposen Pauluksen Paulus (Paulus Magga) explains how the headland between the two rivers trembled when Paulus drove his father's large reindeer herd in the area!
The yoik of Matti Ponku, Big Ponku, explains how he drove around the fells in Saariselkä. Naturally, this rich reindeer herder drove a male reindeer trained for pulling a sled. The nickname ‘Big' refers to a his large reindeer herd. He travelled back and forth across the entire expanse of the wilderness. Ponku's reindeer hearding area, Ponkun kotamaa, lies to the south-east of Lake Kopsusjärvi on modern maps. 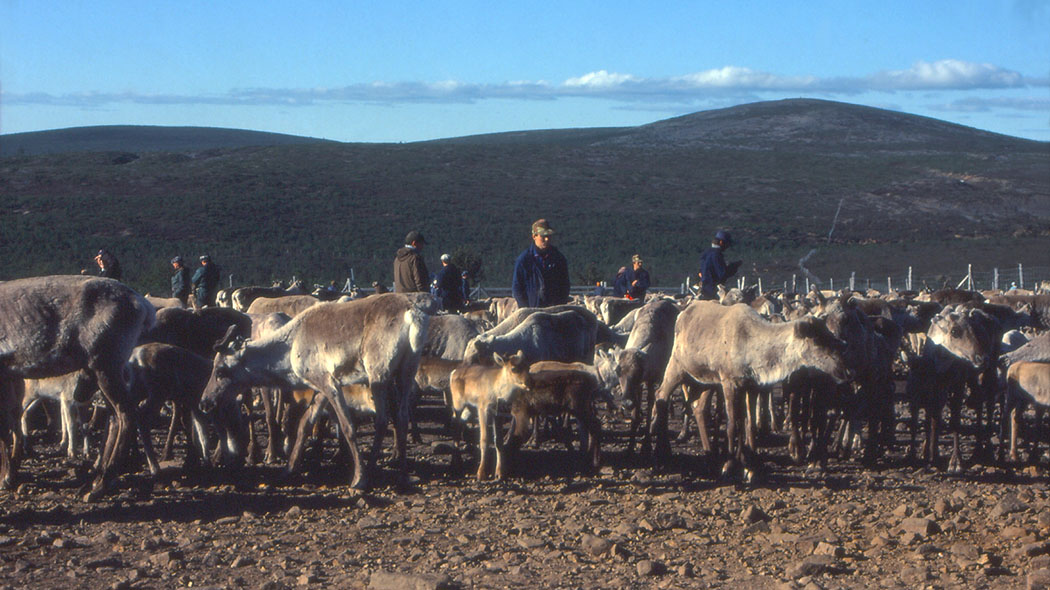 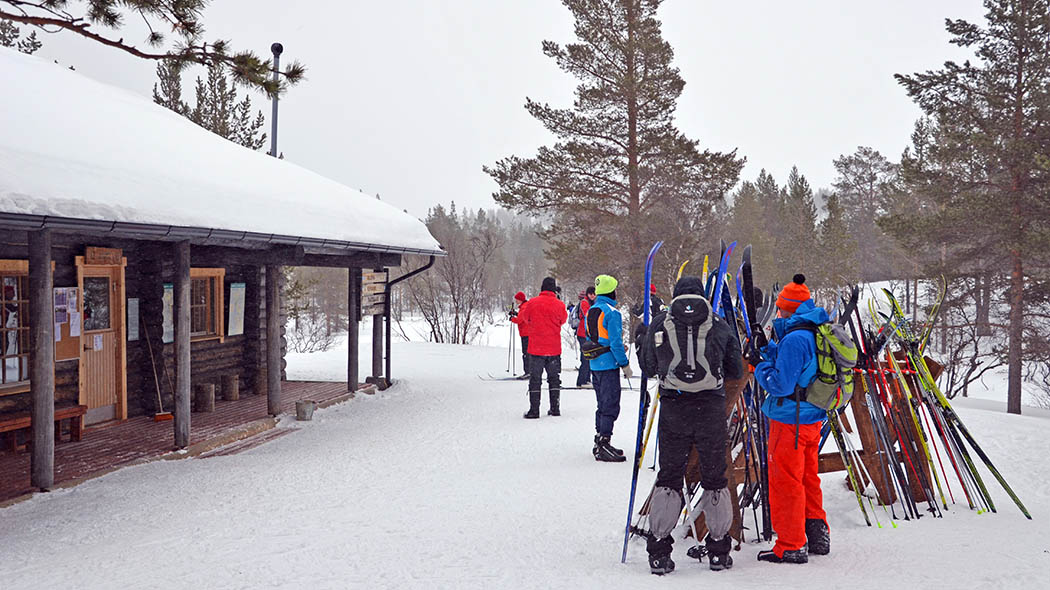 Kullervo Kemppinen (1921–2012) was one of the early hikers in the 1950s. He was first introduced to the land of the fells while flying eight missions during the war. The fell landscape made an everlasting impression on the mind of this young Air Force officer. In later years, he was a regular hiker in Lapland for many decades and wrote books about his trips. 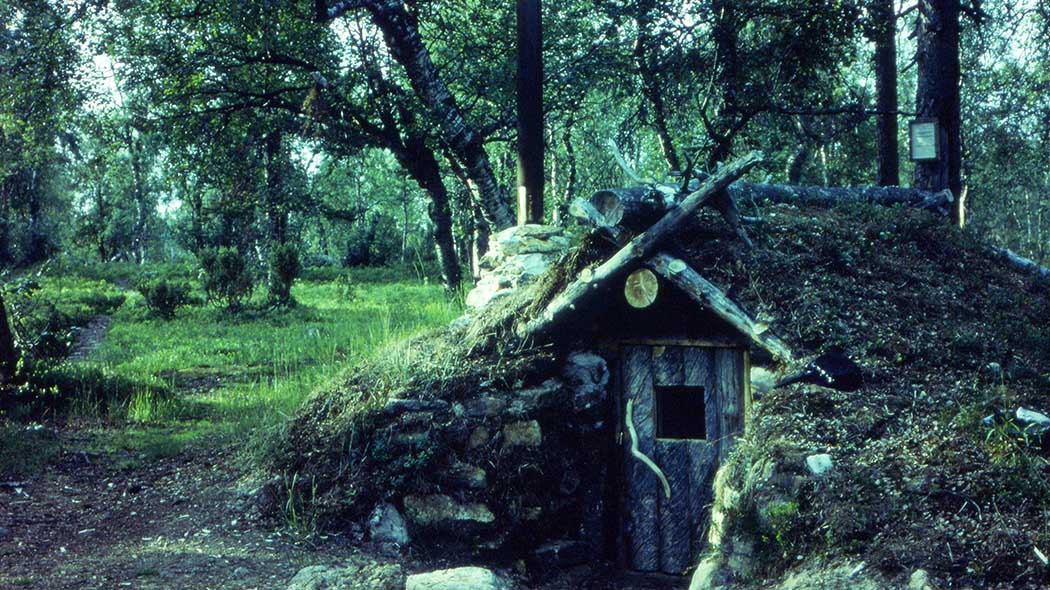 Kemppinen was a lawyer and writer, and had been awarded the honorary title of ‘laamanni'. He has been fascinated by Lapland and Saariselkä since the 1950s. Enchanted by Lapland, Kemppinen wrote several books inspired by the trips he made during the course of five decades.
His books include wonderful descriptions of nature, interesting tour stories and an abundance of hiking instructions and practical tips.  In his books, Kemppinen also describes gold diggers, the hermit Meänteinen (Reijo Savinainen) and other inhabitants of the wilderness.
Kullervo Kemppinen's first book, Lumikuru, was published in 1958. The very name of the book, ‘snow gorge', anchors the hiking and nature experiences in the very heart of the Saariselkä fell area. Published in 1961, the book Poropolku kutsuu (call of the reindeer trail) made the Saariselkä area even better known.
Kullervo Kemppinen is considered the virtual discoverer of Saariselkä. Thanks to his books, the area became increasingly popular and the numbers of hikers grew. Over the decades, marked hiking trails and nature trails have been introduced alongside reindeer trails in the area. 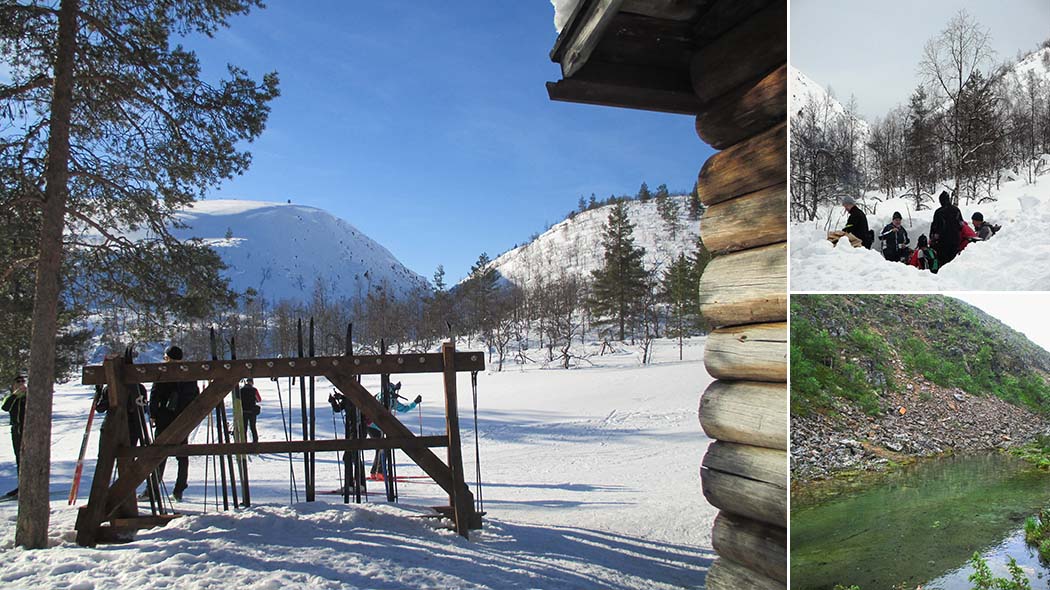 The new Rumakuru day trip hut was built in 1960 for research and hiking purposes by the Finnish Forest Research Institute Laanila test area. Urho Kekkonen National Park was established in 1983; the hut was transferred to Metsähallitus in the following year.
The hut has been used exclusively for hikers ever since. The day trip hut has been restored in accordance with the guidelines of the National Board of Antiquities, so that it serves hikers well but its original appearance is preserved. The Rumakuru New Day Trip Hut is intended for short-term rest stops by hikers, so that they can take a break next to the marvellous gorge.
The Rumakuru Old Day Trip Hut is located about half a kilometre away from the new hut. The old hut is one of the oldest buildings in Saariselkä. 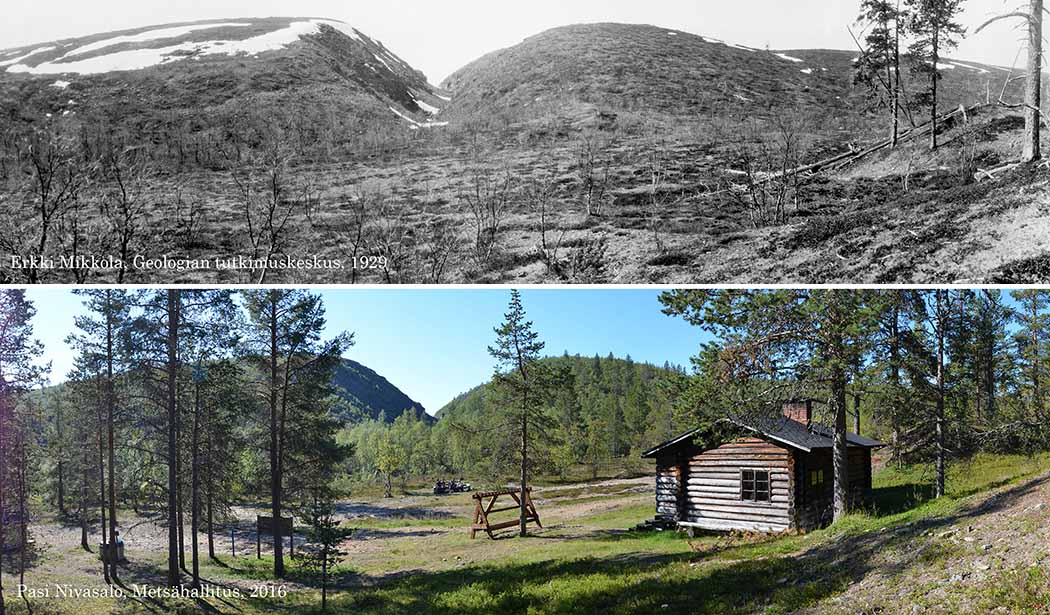 Rumakuru Old Day Trip Hut
The Rumakuru Old Day Trip Hut, probably originally built by gold prospectors, is now a day-trip hut for hikers. Standing in a slightly slanted position on a wooded hillslope, the old hut welcomes hikers. When you enter the hut, there is nothing to indicate that it is one of the oldest huts in the area.
The Rumakuru Old Day Trip Hut was built at the turn of the 19th and 20th century. Later, new hosts gave it a new lease of life through renovation and regular maintenance. Enjoy a snack in this clean hut, take a break from the fast pace of your ski trip or hiking tour, and focus on listening to the hut's story. 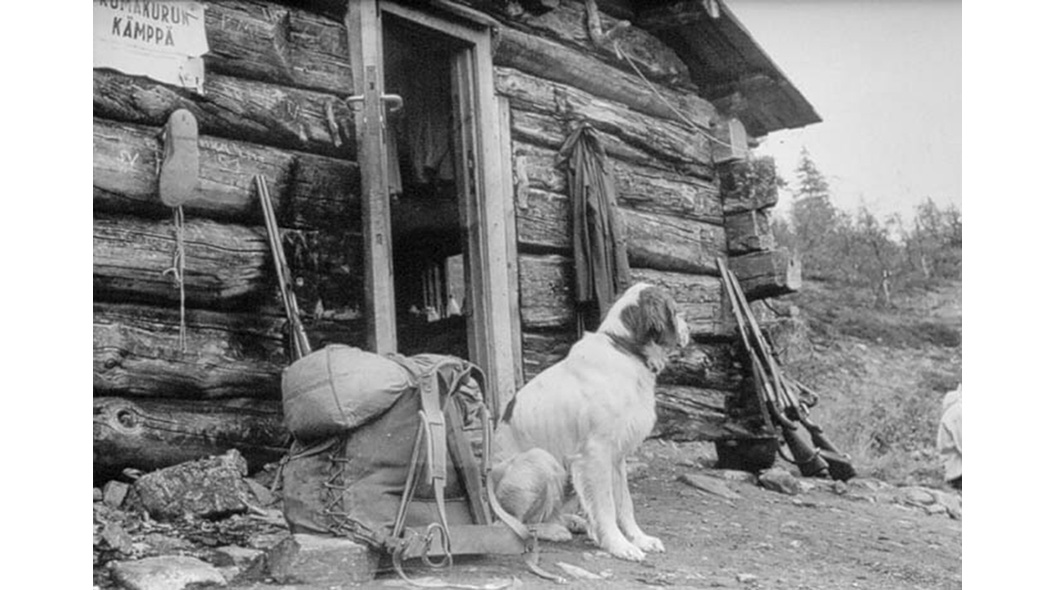 Silence and a good imagination can help you hear the thoughts of the men who built the hut. It is not known for certain, but traces of digging in the nearby area suggest that the hut was a base for gold prospectors. From how far might the people who joined the Lapland gold rush have come? One can only guess what gold diggers had in mind during the long summer days of Lapland. Was every shovelful dug in the small brooks upstream in the river Kulasjoki filled with the hope of finding the parent rock full of gold?
The modest traces of digging show that this riverbank was not subject to a major gold rush. The builders abandoned the old Rumakuru hut and went elsewhere. It is unknown whether they continued on to other brooks to dig for gold, or abandoned the activity once and for all.
However, the biggest nugget ever found in Finland came from a place very close to this one. In 1935, gold digger Eevert Kiviniemi discovered a gold nugget weighing 392.9 grammes in the river Luttojoki in Saariselkä. It is still the largest gold nugget ever found in Finland.

Not everyone arrives in Saariselkä for the purpose of hiking in the fells with a constantly lightening backpack. News about a gold deposit found in Lapland attracted gold prospectors to Saariselkä.
Gold was found for the first time in the Saariselkä area in 1865. The actual gold rush to the River Ivalojoki began in 1870. That was when Kultala by the River Ivalojoki was built and as many as 350 people worked in the area during the peak of the rush. Later, in the 1900s, gold was even found in Tankavaara and the River Lemmenjoki.
The first building in Saariselkä was the Prospektor company's head office built in 1902. The actual mine, with mine shafts, was built on the north-east side of Laanila. Prospektor's mining operations were unsuccessful, no gold was found, and the company closed down. For a period of several decades, the Office building became the first inn in the Saariselkä area. Visitors can enjoy the gold rush and the atmosphere of the mine at the Prospektor mine, situated on a popular hiking trail.