The Saariselkä area was overwhelmed by an unprecedented gold rush in the late 1800s. Gold had been excavated along the Ivalo River, its tributaries and brooks since 1868, but now companies had bigger dreams and bigger money at stake.

Gold being found on the riverbanks and riverbeds persuaded people that it had been washed out of somewhere farther away and transported in water, ice and loose soil. Somewhere, there had to be a parent rock, full of gold, from which some of the treasure had loosened and travelled further. All you had to do was find that place, and you would be rich.

Entrepreneurs and financiers fell under the spell of the dream of the parent rock. 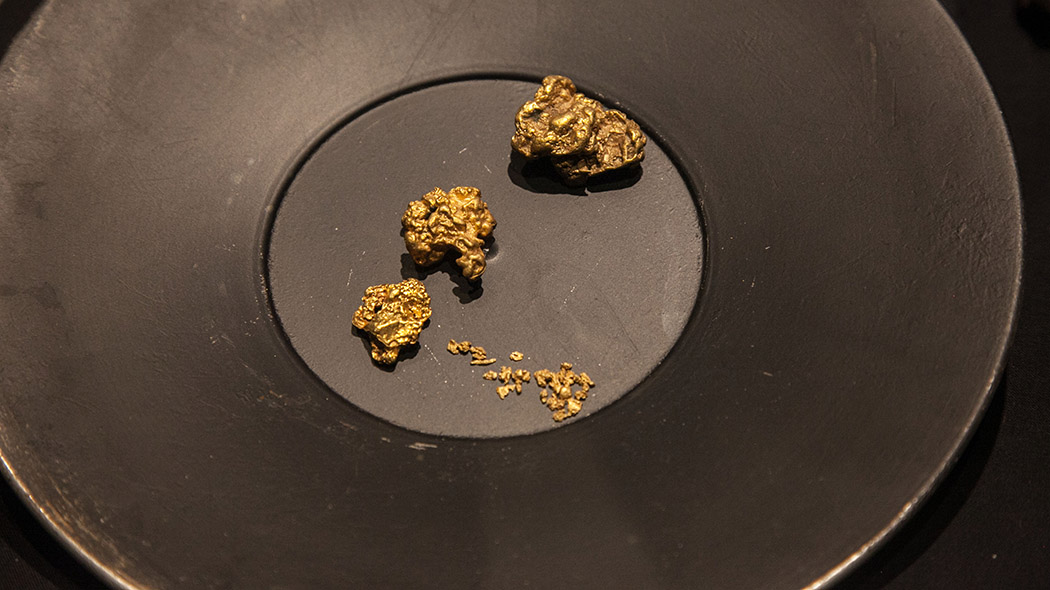 Henrik Herman Kerkelä (1869–1929) from Kemijärvi sparked off the gold rush. He happened to be present when an official geological expedition, led by J. Sederholm, Director of the Geological Commission, came to the conclusion that Hangasoja in Laanila was the likely location of the rock gold deposit.

This occurred in 1898. Kerkelä quickly claimed the area in question. He later managed to convince financiers with his analyses indicating that the rock contained up to 92.50 grammes per tonne of gold. This was an unprecedentedly high concentration.

When the public authorities, led by Sederholm, praised Kerkelä, investors offered to back the mining project. The mining company Pohjola began operating along the Hangasoja brook (see the map) in February 1902. The company's capital was as high as FIM 1.8 million. 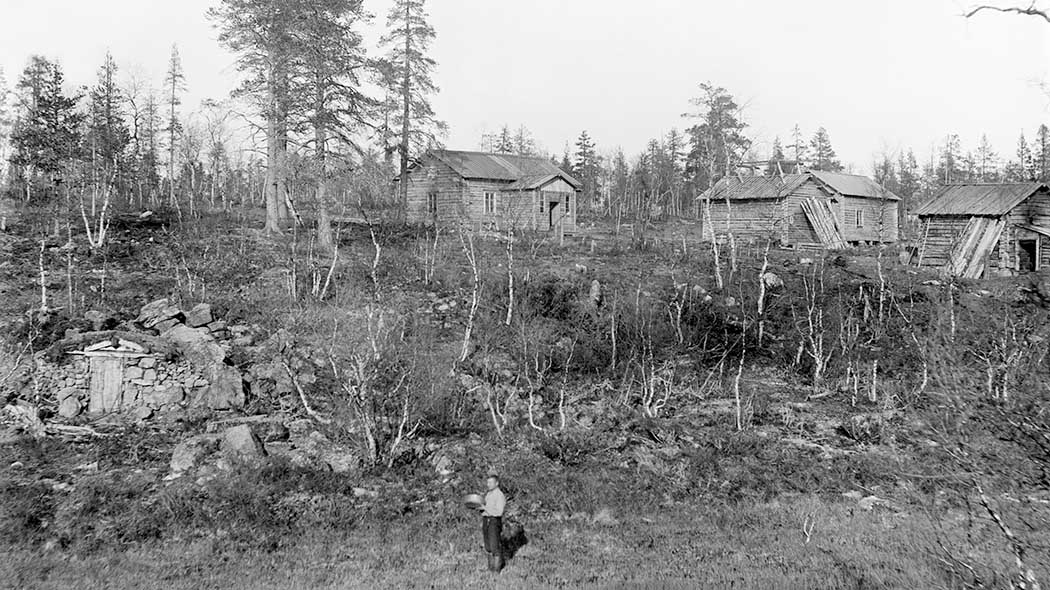 Aktiebolaget Prospektor was founded to compete with Kerkelä later in 1902.  The founding of the company was the work of J.J.Sederholm, mentioned above. The company was owned by a number of influential men.

Hopes were high regarding the parent rock. This is illustrated, for instance, by the fact that the forester who measured the timber reserves south of the Ivalo River reported that the region's entire wood resources should be conserved to meet the future needs of the mining industry.

Before long, the entire Saariselkä area from Kaunispää to Kakslauttanen in the north-south direction, and from Tolosjoki to Luulampi, was systematically claimed, as indicated by the enclosed map belonging to Albin Torckel from 1902. The list of claimholders is interesting. For instance, it includes a number of public officials, whose actual profession had nothing to do with gold or gold mining.

Forest conductor (forester) Arthur Granit had come to Inari in 1897, in order to chart the areas and their timber reserves. He acquired around thirty claims in his name.

Mauritz Waenerberg, a former sea captain, also worked for Metsähallitus. He was as a forest inspector in Kaamasen Thule, also being tasked with the confirmation of mines.

Waenerberg's name is bound to come up if you read travel journals from the late 1800s. Kaamasen Thule, hosted by Waenerberg, "uncle Lapland", is always mentioned as a friendly and welcoming place of rest for travellers. Waenerberg acquired 48 claims in his name.

Both Granit and Waenerberg sold their claims to Prospektor as early as 1902. So apparently did engineer K.A.Niinikoski from Tampere, who claimed the entire Iisakkipää and Vahtamapää area up to Vellinsärpimäoja in the east. The number of claims was 76.

It is peculiar that Niinikoski's name does not appear in any articles on the history of gold in the area. However, he is one of the men in a group pictured outside Prospektor's base in Laanila. This leads me to the conclusion that he also sold his claims to Prospektor.

Prospektor ended up owning a total of 470 claims. 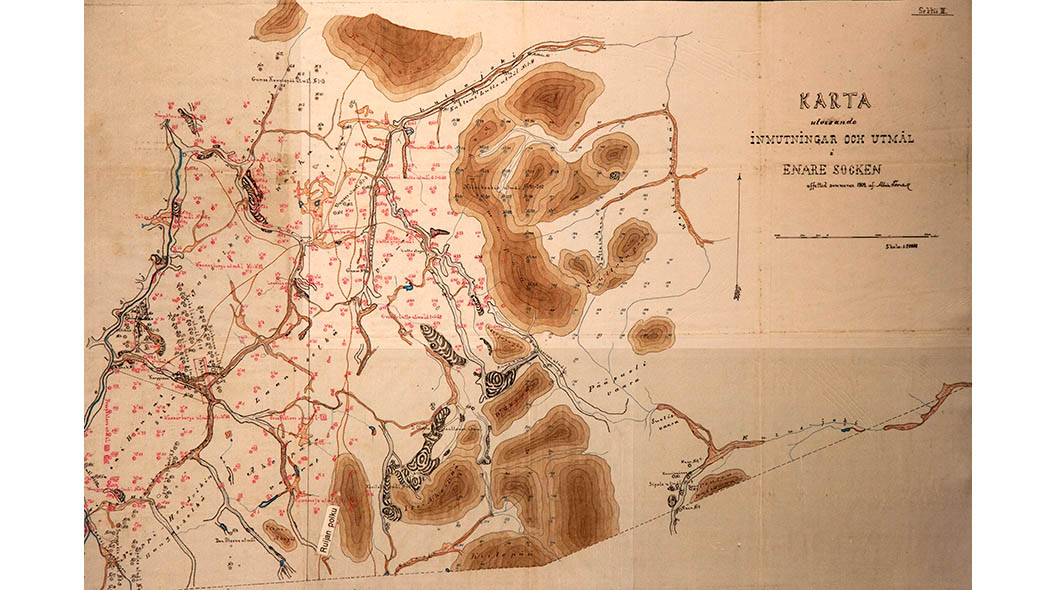 Prospektor initiatied construction, road and excavation works on an unforeseen scale in the area. The company had up to 164 employees. Mining engineer Emil Sarlin and chemical engineer Juho Hugo Saarinen led the work.

These men appear to later generations not only as representatives of their own sector but also as the first photographers of their time, who recorded the people, activities and landscapes of the early 1900s for prosperity. For instance, the old photos (stored at GTK's Hakku directory) in this text were taken by them. 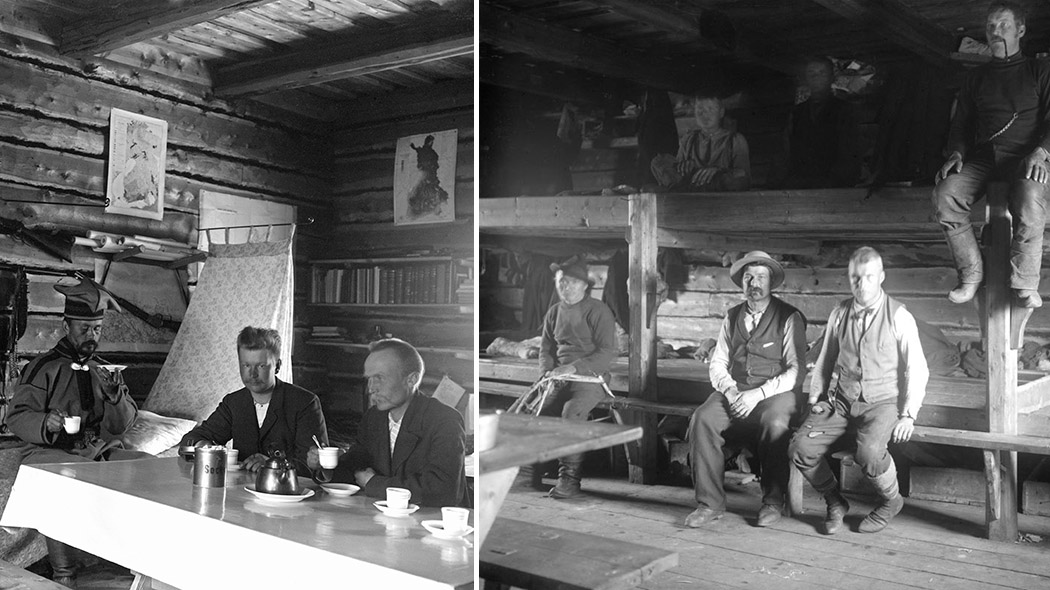 The deepest mine shaft was excavated all the way down to 51.5 metres, at the Lutto, or Prospektor mine. Other mines included the Ramsay mine and the Carl Gustav mine, on the north side of the current Kuttura road, and the Colonel mine along the Hangasoja brook (see map). 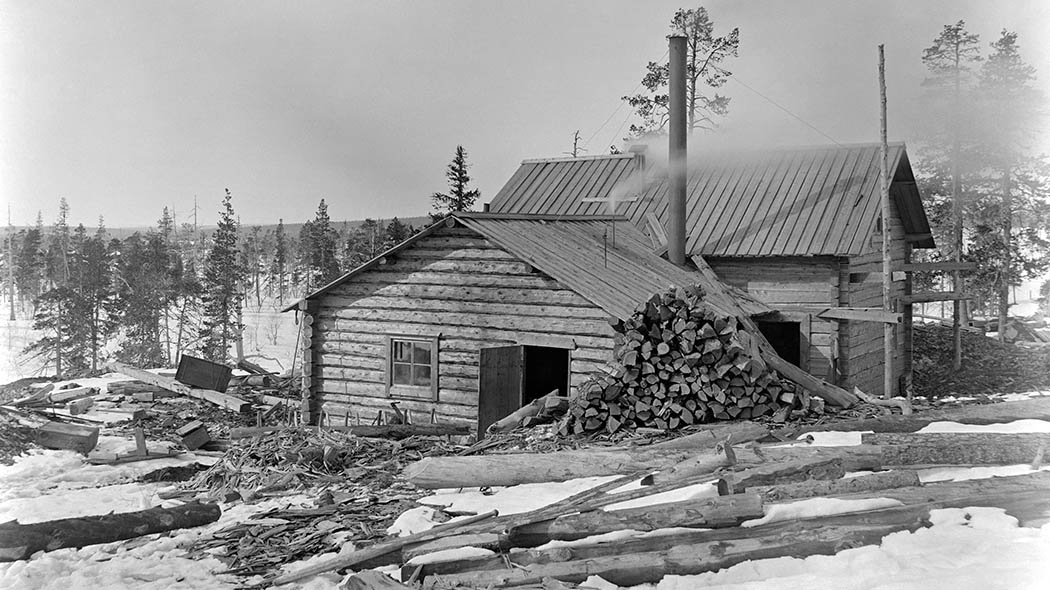 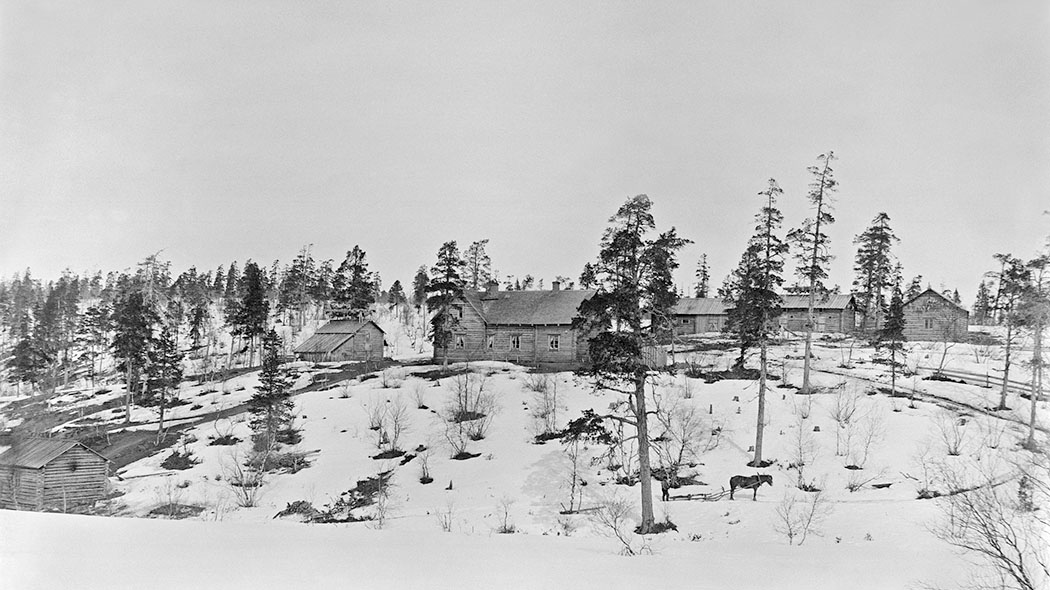 Water became a problem in all of the shafts. The bedrock proved to be so eroded that water would fill the shafts, despite being pumped out as fast as possible.

As the amount of gold found was nowhere near profitable. Prospektor had to close down in 1904.

Final act – or not

Both companies, Kerkelä and Prospektor, ended up bankrupt. Either no gold, or too little, was found.

Kerkelä is believed to have cheated investors from the outset.  He is thought to have brought the rocks that contained gold from America, where he had previously worked as a miner.

Kerkelä still managed to sell his mine. The final act related to the deal took place in the courthouse of Inari.

Kerkelä and Prospektor's failures were by no means the final ventures of this type. Twenty years later, in the 1920s, a new gold rush began. Businessmen and financiers were again found and were once again confident that large amounts of gold were lying in the north. Again, their efforts came to an embarrassing end.

The story of Lapland gold is brimming with fantastic tales of hope and enterprise and subsequent despair and financial ruin. But there are successes too. The locals dug in the wake of the large companies that left the area. Many worked hard and succeeded in obtaining a livelihood for their families on the basis of the nuggets of gold found.

Gold digging continues. Summer after summer, these men and women return to their pits to dig for gold. For some, the digging is hard work done to make a living, while for others it is a way of life that counterbalances life in the city. 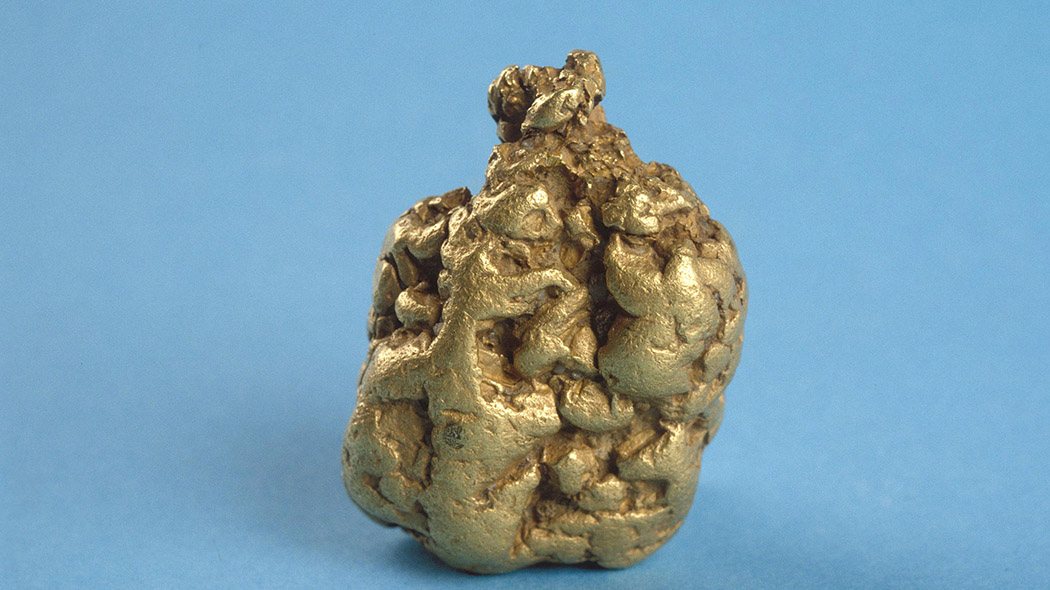 A question which will never be answered?

This story is fascinating, because no definite conclusions can be drawn from it. In 1935, gold digger Eevert Kiviniemi discovered a gold nugget weighing 392.9 grammes in the River Luttojoki in the Saariselkä area. It is still the largest gold nugget ever found in Finland, weighing a spectacular 392.9 grammes.

However, it is said that his relative, Aleks Kiviniemi, found an even bigger nugget in the Hangasoja brook as early as in 1910. The weight of Aleks' nugget has, however, never been verified, because prior to weighing he removed some of the gold for a ring. Even after that, the gold nugget weighed 385.36 grammes.

How big is a gold nugget that weighs around four hundred grammes? The finder must have been over the moon at this amazing reward for his hard work with a shovel. One can only imagine his feeling of joy when he caught sight of the egg-sized nugget.
If you are interested in the history of gold
You can explore the history of Lapland gold not only on the Prospektor trail, but also on the Laanilan Kultareitti trail. In fact, this trail offers more gold-related sights than the Prospektor trail. The Kerkelä mine and the mine shafts of Prospektor (what is left of them), Colonel and Carl Gustaf, are located here. 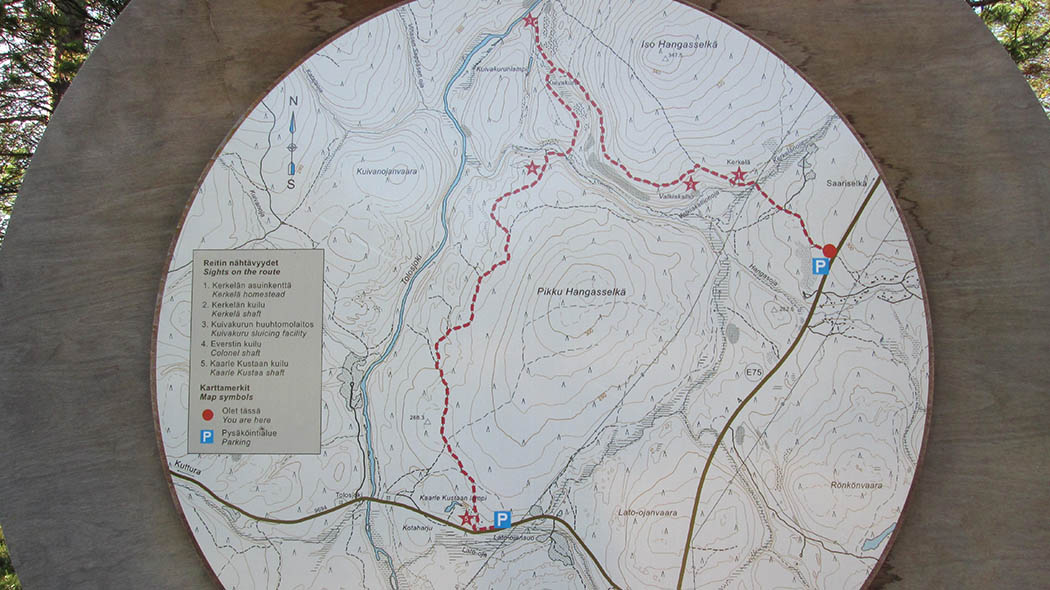 Several books have been written on the history of Lapland gold. If you are interested, the books of Seppo J. Partanen, such as "Heroes, cheats and rogues" which was the key source for this article, can be recommended.

Lauri Skantsi recently (1916) published a book focusing on the history of Laanila. Gold digging plays a key role in the book. Herman Stigzelius' "Gold Rush - the history of Lapland gold" numbers among the introductory books on the topic. 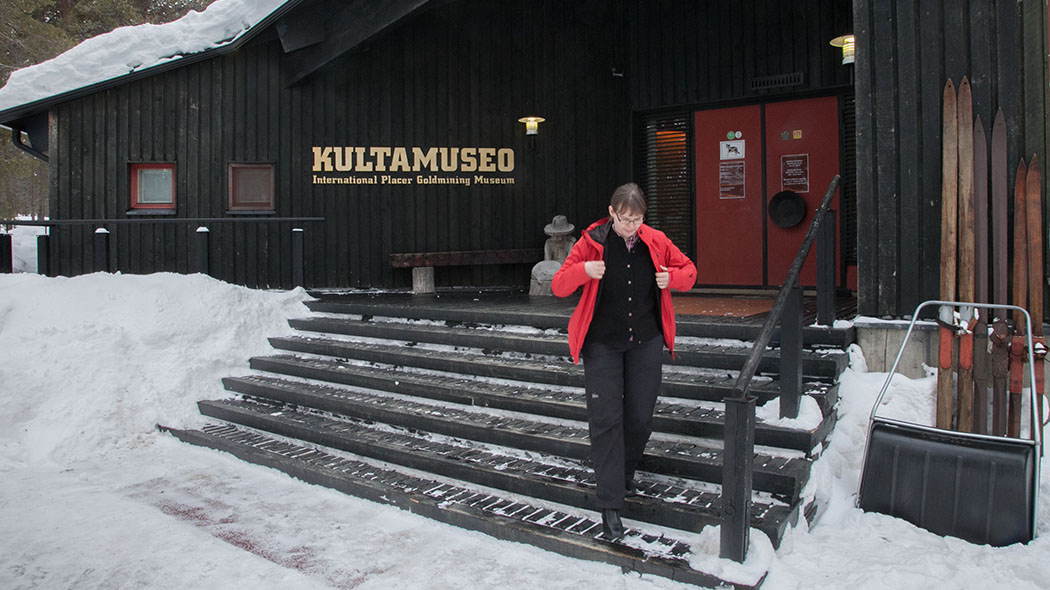 Tankavaara gold prospector museum (kultamuseo.fi) (37 km from Saariselkä to the south) is a place worth visiting. The excellent exhibitions are focused on gold and its excavation, not only in Lapland but also other parts of the world.
Visit also Tankavaara Gold Village.